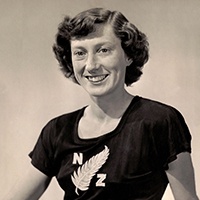 Pioneering is part of who we are. That’s why each Ryman village is named after a Kiwi or Aussie trailblazer, Yvette Williams, Logan Campbell, Linda Jones to name a few. They lived with passion and purpose, they pushed further, they went beyond the ordinary. That’s exactly what we strive to do, every day, at Ryman. To pioneer a new way of living, for a new retirement generation.

Yvette Williams was born in Dunedin in 1929. In 1952 she the first New Zealand woman to win an Olympic gold medal, in Helsinki.

In 1950 Yvette won the Auckland Empire Games gold medal in the long jump and silver in the javelin.

In February 1954, she broke the women's long jump world record in Gisborne, with a jump of 6.28 metres.