Possum Bourne in the pink for Seven Sharp

Possum Bourne Retirement Village turned into a sea of pink this morning with residents and staff pulling out all the stops for their annual breast cancer fundraiser.
What made it even more special was the fact that Seven Sharp reporter Carolyn Robinson and her cameraman Lee were there to record the huge effort everyone had gone to.
There were more than 150 residents seated at tables throughout the village centre, with the table in the centre reserved for the village’s knit and natter group.

The knitters have knitted up a storm over the years but more recently they have knitted dozens and dozens of knockers – special knitted balls that women who have had mastectomies can use as prosthetic breasts.
Breast Cancer Foundation New Zealand Educator Debra Leutenegger reeled off some alarming figures after the breakfast, which was also attended by her mother Merle McIvor, a resident at Possum Bourne for the past four years. 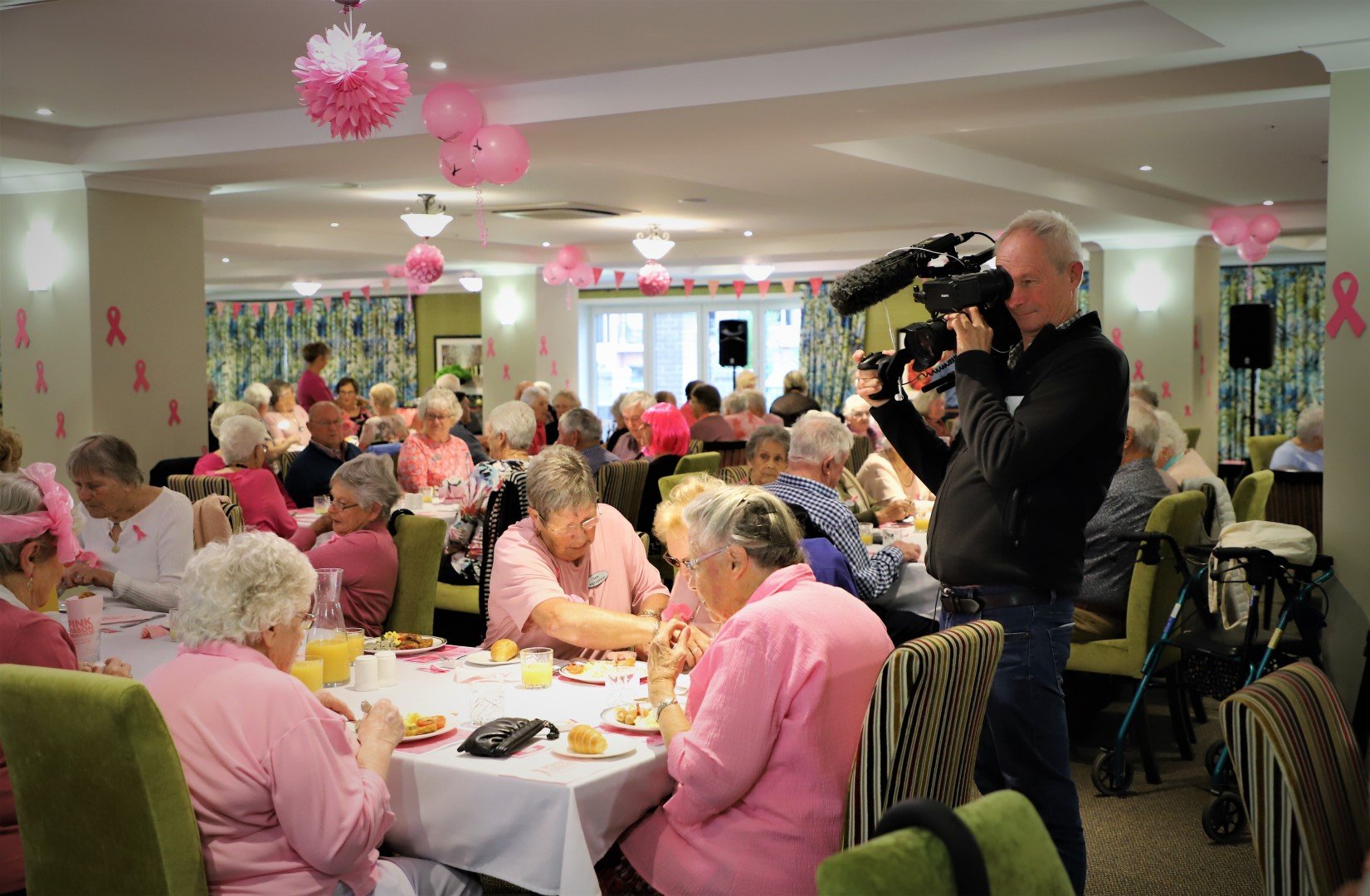 Seven Sharp film the ladies at breakfast (above) before BCF's Debra Leutenegger explains why early screening is the best protection from breast cancer (below).

Every year, 3,330 women are diagnosed with breast cancer in New Zealand and 25 men. That’s nine people a day. And there are 650 deaths each year, Debra said.
“Many people believe you’re more likely to get breast cancer if a family member has had it.
“But actually only 5-10% of all breast cancers are hereditary. Around eight out of 10 women who get breast cancer don’t have any family history of the disease.
“The fact is if you have breasts you are at risk of developing breast cancer and the older you get the higher the risk.”
Another resident attending the breakfast who later sat down to tell Carolyn about her breast cancer journey was Pat Mravicich. 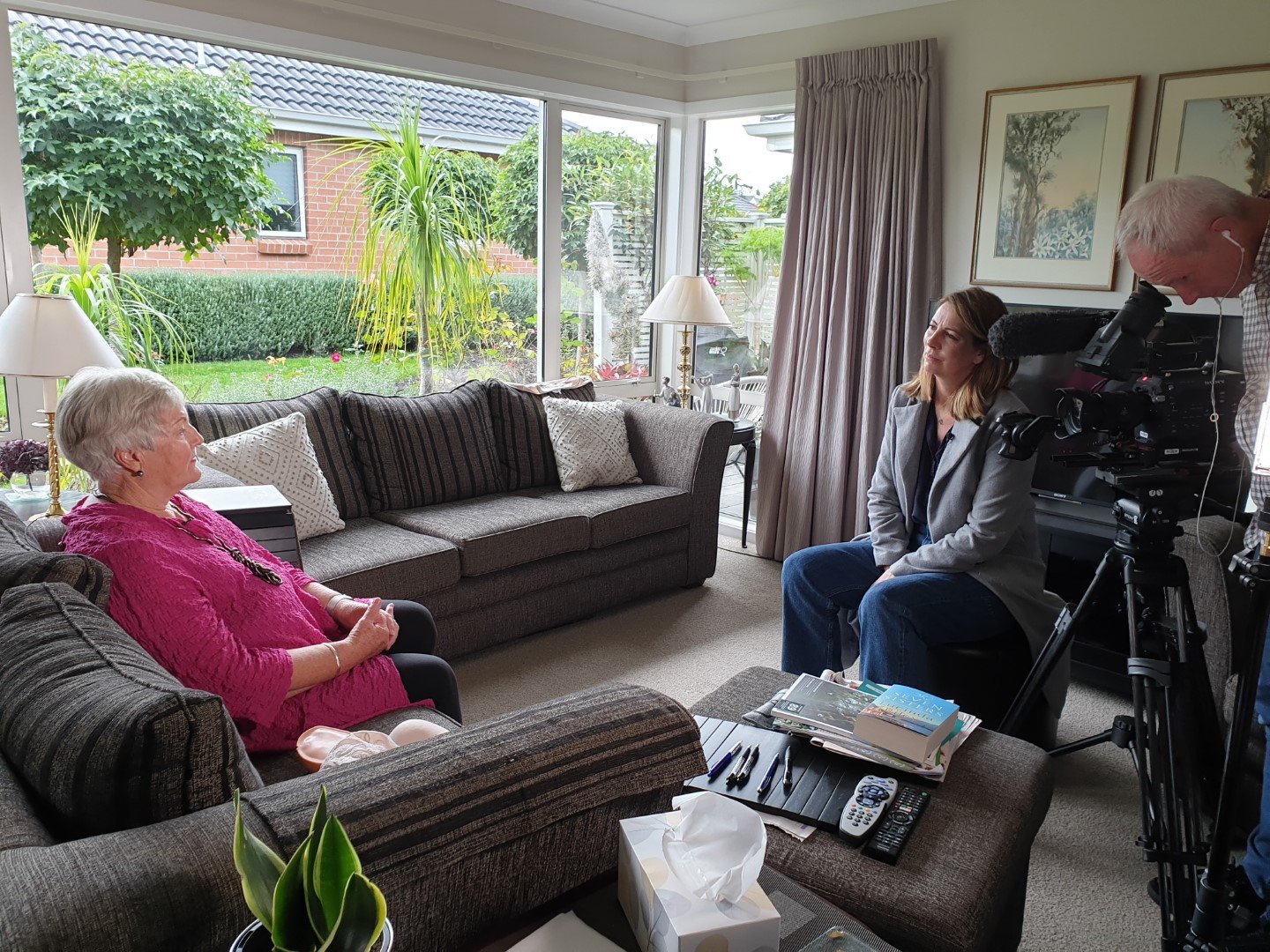 Pat has turned into a huge advocate for mammograms, urging older women to continue to get screened even though the free screening ends at age 70.
She became vigilant about getting mammograms after her daughter was diagnosed with breast cancer when she was 35.
And it was just as well because two years ago an unusual calcification was picked up.
“Further tests found a tumour in the milk duct as well but there was no difference or discolouration to look at the breast,” says Pat who decided to have a double mastectomy so she wouldn’t have to return if it appeared in her other breast.
Later tests revealed early signs of cancer in the second breast too.
“$200 is nothing compared to losing your breasts, and it’s only because I had my regular mammogram that this unusual calcification was picked up.
“So I really encourage women to carry on with their mammograms,” she said.
The knitted knockers had provided a solution for Pat during the healing stages following her operation as they provide a lightweight way of giving shape without causing discomfort.
And while Debra and the Seven Sharp crew were filming the knitting group with a big basket of their latest creations, another resident going through her own breast cancer journey was fitted with one, an unexpected gift that was emotionally received. 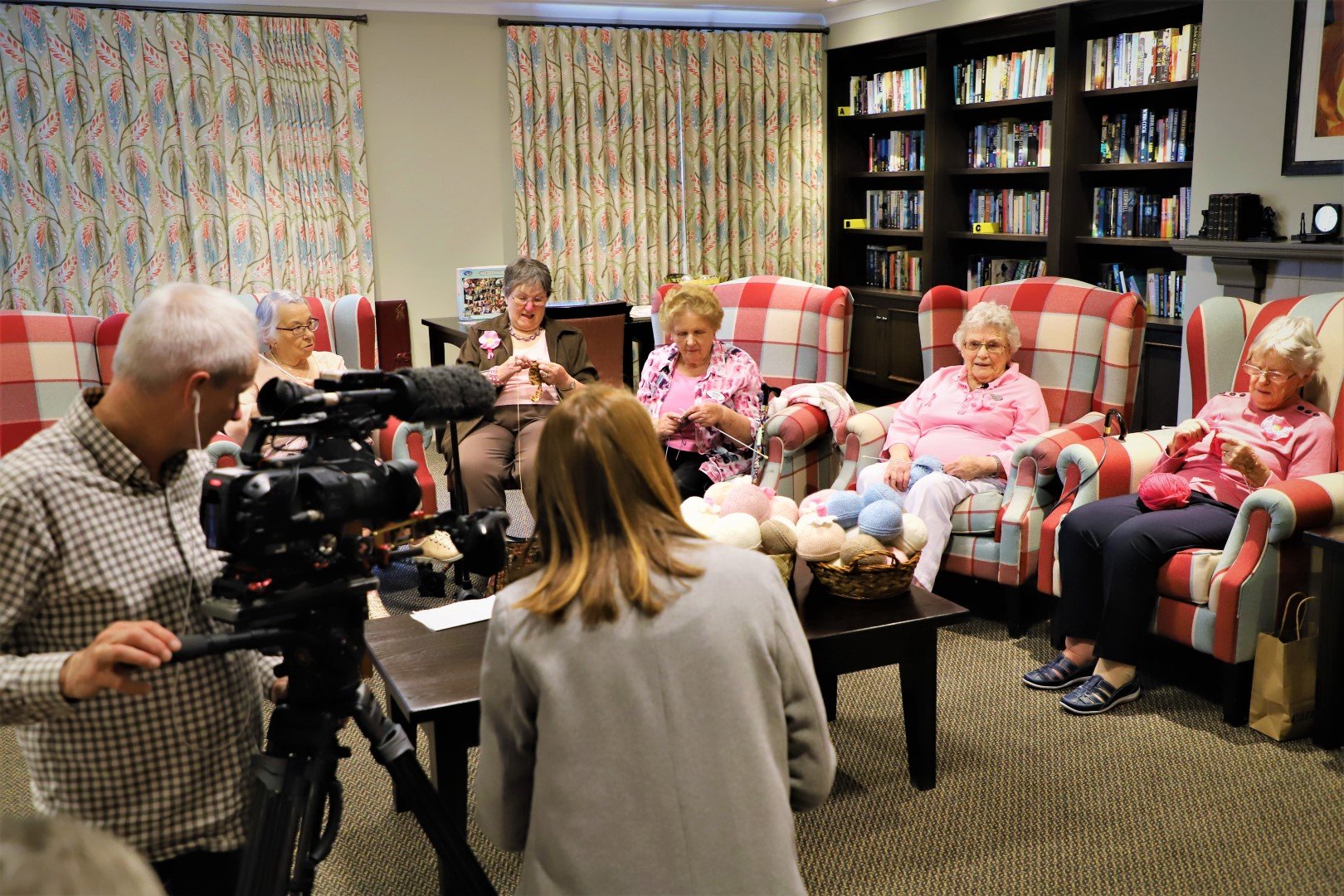 The knit and natter group get the Seven Sharp treatment.

While the knitting group don’t always know who will receive their creations, group member Cora Brooking said it was particularly special knowing a fellow resident would benefit.
Said Debra: “Just knowing the love and compassion that goes in every single stitch makes them so special.”
Rounding off the morning on a high, Activities and Lifestyle Coordinator Sue Horan reported that the funds raised from the breakfast and prize raffle amounted to an incredible $3,490.50.
The story is set to air on Seven Sharp, TVOne on Thursday 6th May.