Funny stories, heartfelt pledges and even self-penned songs were all featured at last week’s reopening of the Mary Barrett Glade, the tree-filled parcel of land between William Sanders Retirement Village and Ngataringa Bay also known as Polly’s Park.
The Glade has been closed off for nearly three years after a couple of slips triggered by heavy rain in June 2018 made the area too unstable for public access.
Ryman, along with the Department of Conservation (DOC), made the call to close off the track until it could be upgraded and the risk from the ongoing construction work had eased.

That time finally came around on Friday and dozens of people, including members of the Barrett and Pollock families, friends, village residents, neighbours and members of various Devonport organisations, were there to celebrate.
While the Glade offers a stunning treescape from the village perspective, many residents who attended were keen to hear more about the people behind the names Mary Barrett and Mabel ‘Polly’ Pollock.
Ryman’s Chief Operations Officer Cheyne Chalmers invited family members, including siblings Paul and Claire Barrett, Mary’s children and Polly’s grandchildren, and Polly’s son Brian Pollock, to share their stories. 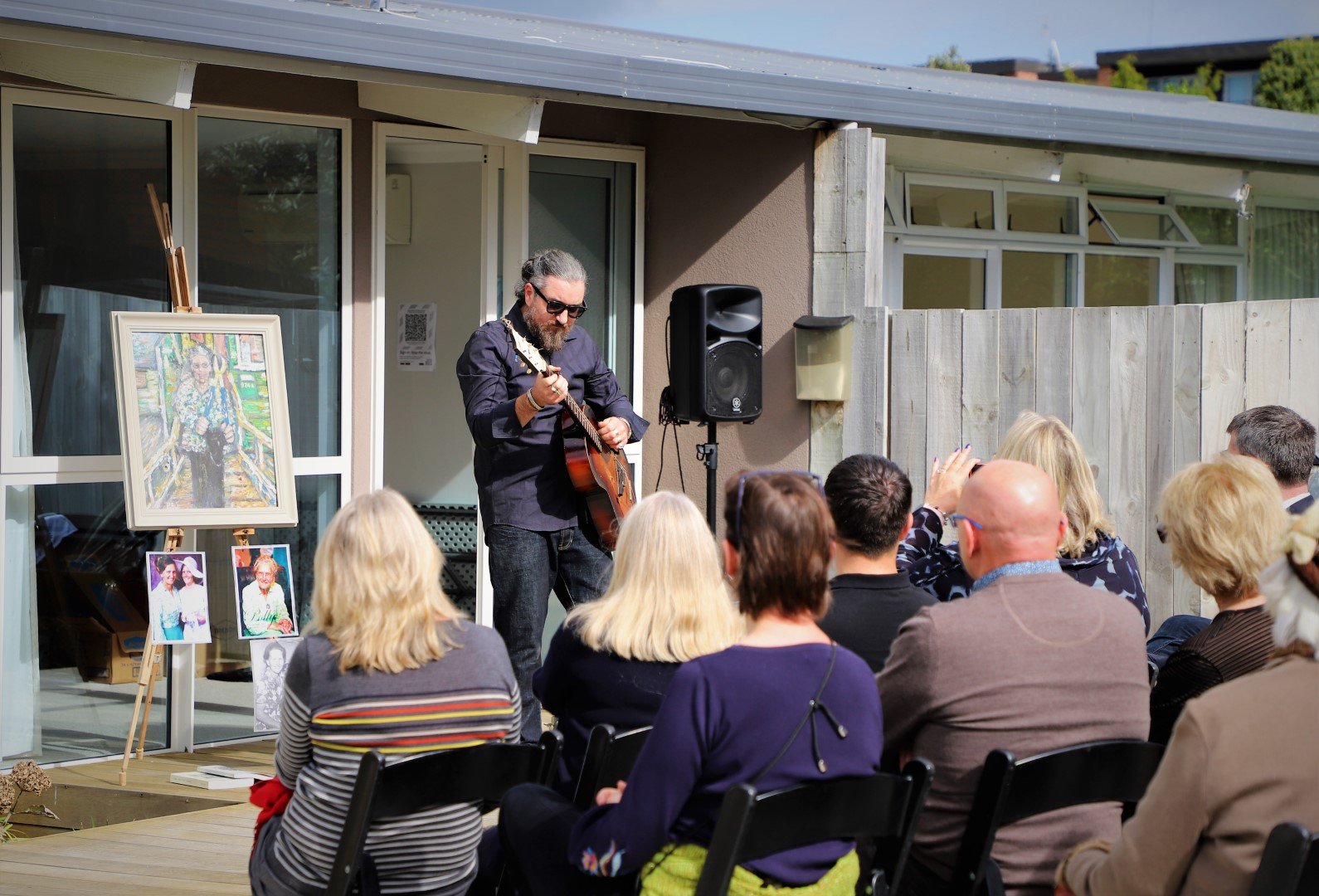 Paul told of a strong character who took it upon herself to almost single-handedly transform three hectares of what was then Navy-run land formerly used as a dumping ground into an urban native forest.
He recalled how Polly would walk to the beach for her daily swim wearing just her togs, towel and jandals, much to the embarrassment of his teenage self.
“Later I realised that was Polly just being her courageous self,” he said. “And preserving her legacy is something I am unapologetically proud of.”
Over the next 16 years she created a living memorial to her late daughter Mary who died from cancer aged 39, and in 2003 she won the Government’s Green Ribbon Award in the category ‘Caring for the Urban Environment’ for her efforts.
After Paul played a song he had written and showed off the official gold coin Polly was awarded by the Deputy Chief of the Royal New Zealand Navy in 2010, his sister Claire talked of the times she helped Polly in the Glade.
“I wouldn’t go round to her house for tea and scones, I would go to the Glade where I would usually find her wheeling barrows of wood chip and planting seedlings!
“I’m so proud to see so many of you here today and I know Polly would be so chuffed too.” 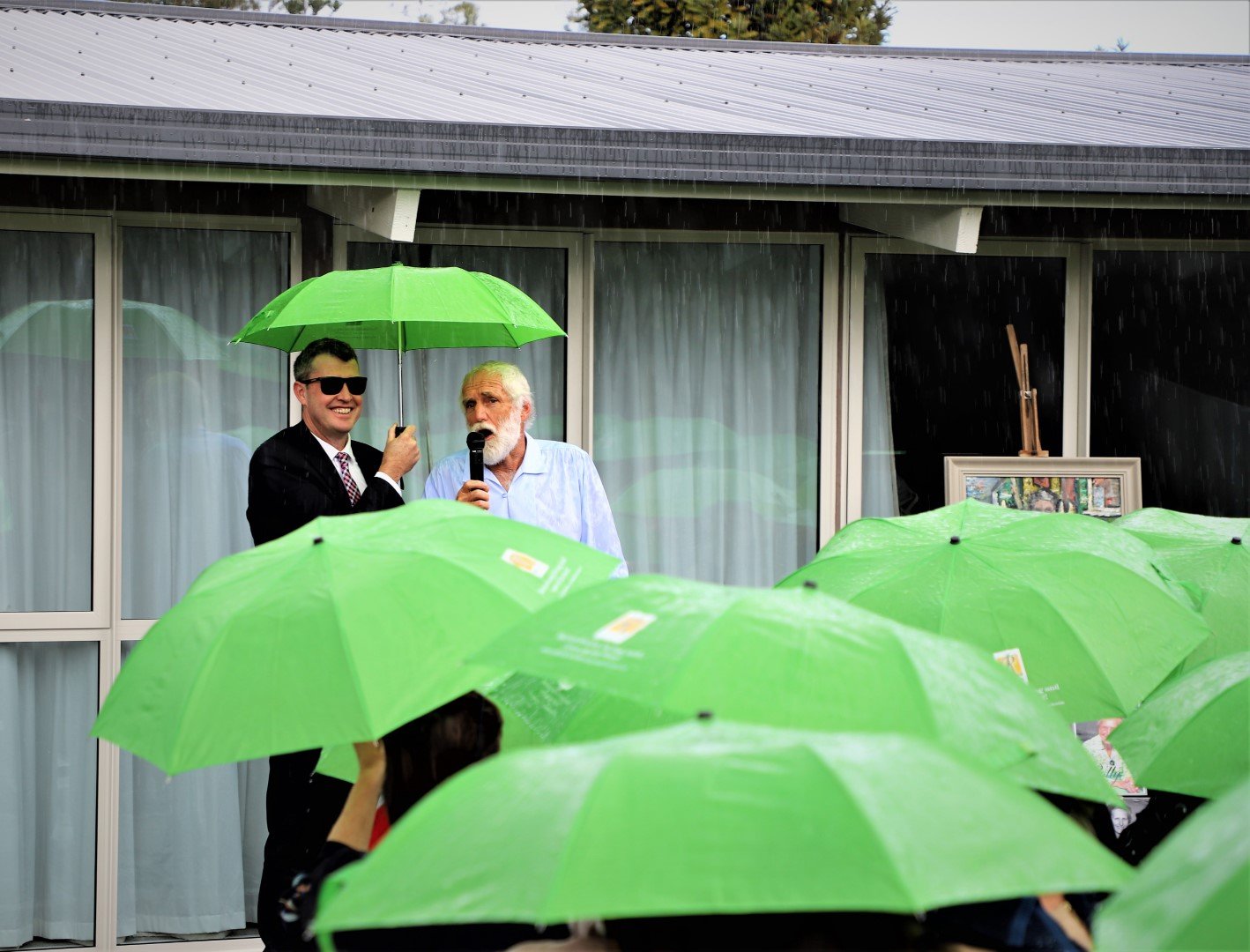 Polly’s son Brian described some of his mother’s early life.
Raised on lighthouses, she travelled extensively, wrote books, and was believed to be the first female to receive a taxi licence in 1950s Auckland.
Midway through his speech, the sun and blue sky were replaced by grey clouds and a downpour of rain, fortunately held off by a supply of green Ryman umbrellas.
“It doesn’t bother me,” Brian said. “Polly raised me to ignore the rain and carry on working!” 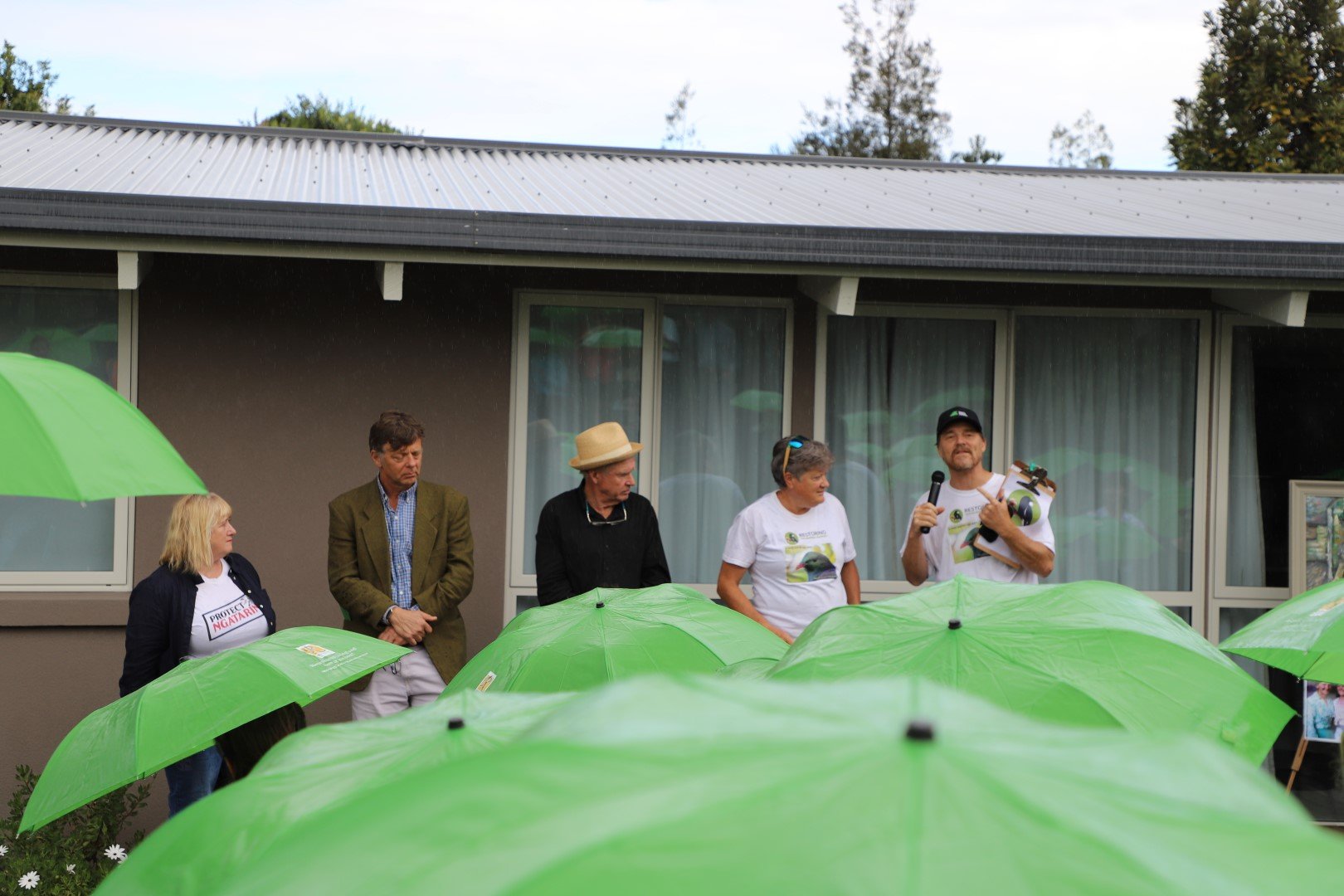 Members of the community groups devoted to protecting the Glade.

Finally, members of Pest Free Devonport, Restoring Takuranga Hauraki, and the Devonport Peninsula Precincts Society stood before the audience to pledge their dedication to preserving the Glade as part of their work restoring the Ngataringa eco-corridor and making it a haven for native birdlife.
Bagpiper Kat Legg then led the group to the Glade where the ribbon was cut and everyone walked through the Glade. 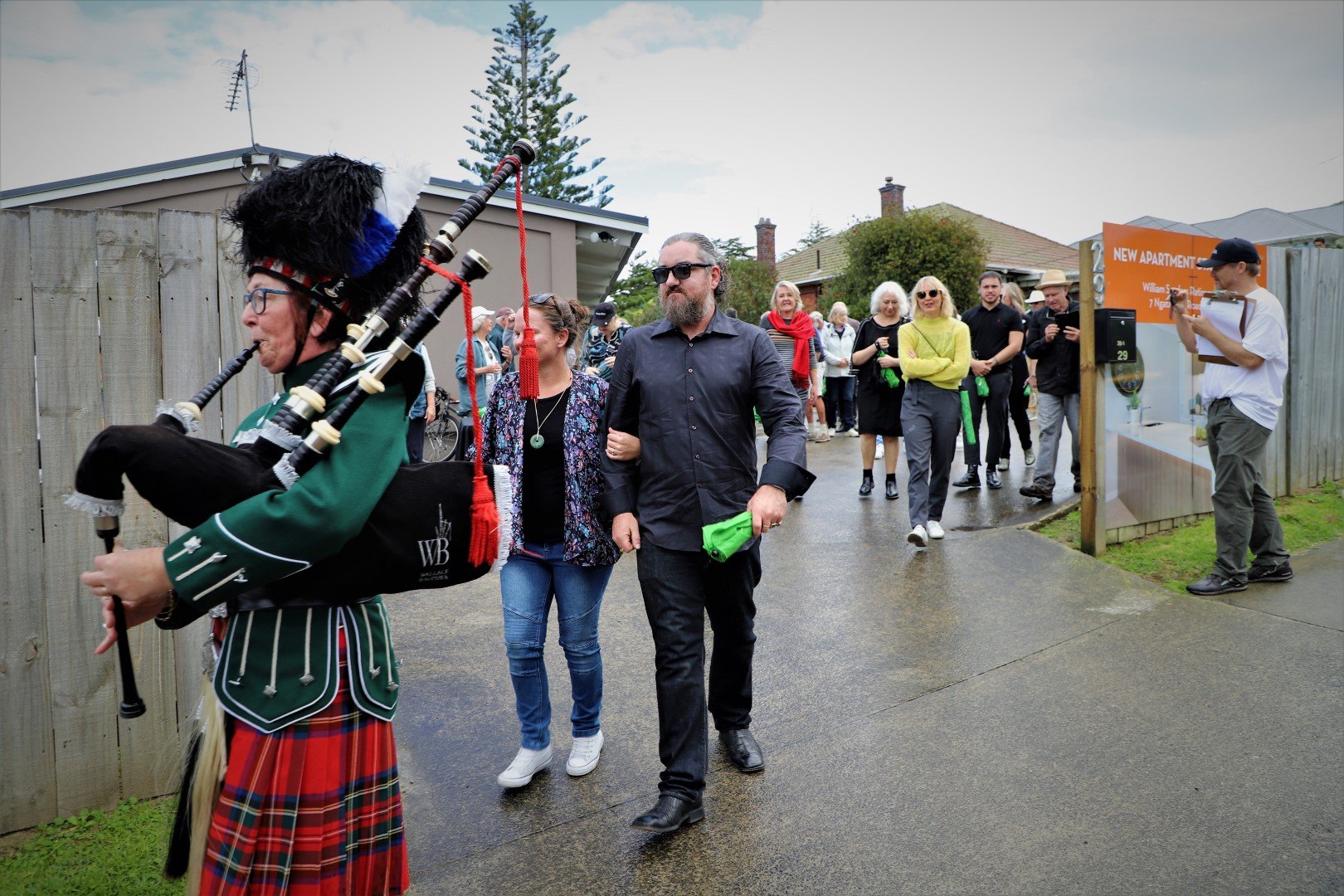 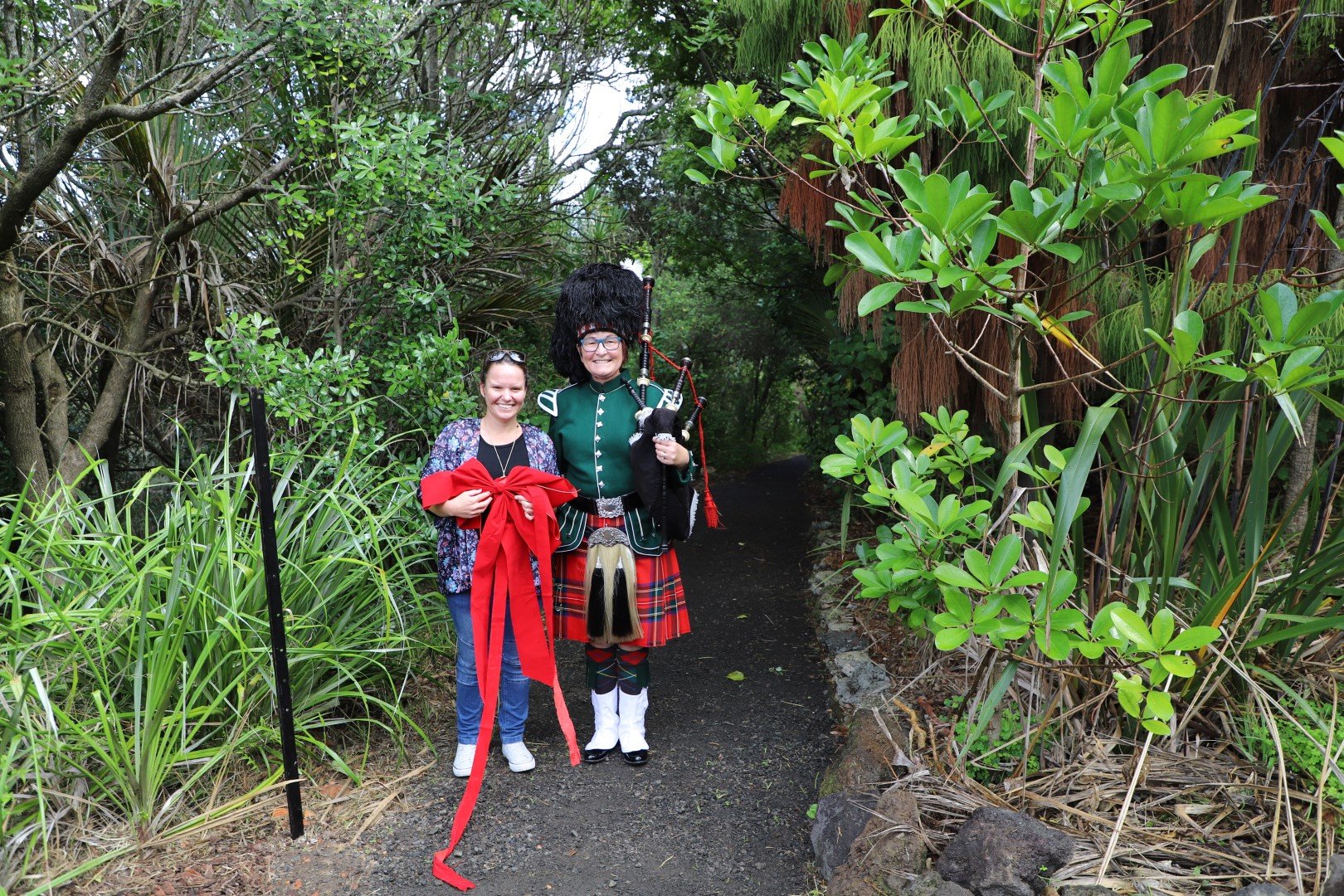 Bagpiper Kat Legg leads the group to the Glade (top) and with Polly's granddaughter Claire Barrett (above).

DOC organised the upgrade of the track with the work being paid for by Ryman Healthcare as part of its resource consent.
Ryman also provided replacement Mary Barrett Glade signs and, as also required under their resource consent, information panels detailing the history of the wider area.
The village’s location was once the site of the former Duder Brickworks, remnants of which can also be seen throughout the Glade.

Ryman was founded in 1984 and has become one of New Zealand’s largest listed companies. The company owns and operates 41 retirement villages in New Zealand and Australia which are home to more than 12,000 residents and the company employs 6,100 staff.