Residents at Murray Halberg Retirement Village were full of praise for a beautiful new portrait of their village namesake, revealed last week.
The painting features two representations of the Kiwi sporting legend, one in his Rome Olympics team uniform and one running his way to victory in the 5000 metres event at those same 1960 Games.
The portrait was revealed after a suspenseful build-up by Ryman Healthcare’s Corporate Affairs Manager David King at the residents’ recent happy hour gathering.

David explained how Ryman villages ended up being named after significant New Zealand individuals.
“It was our cofounder Kevin Hickman’s idea. He thought a person would resonate more than a geographical location.
“And Ryman Lynfield doesn’t sound quite as good as Murray Halberg!” he said.
Kevin Hickman also had the idea to commission artist Craig Primrose QSM to create an original painting of each village namesake.
So far, Bruce McLaren, Bert Sutcliffe, Edmund Hillary, Grace Joel, Evelyn Page and Logan Campbell villages now proudly display their namesake portraits in their reception areas, adding a real wow factor.
“Given we have 41 villages and counting, we think that should keep Craig busy for most of the next decade!” said David. 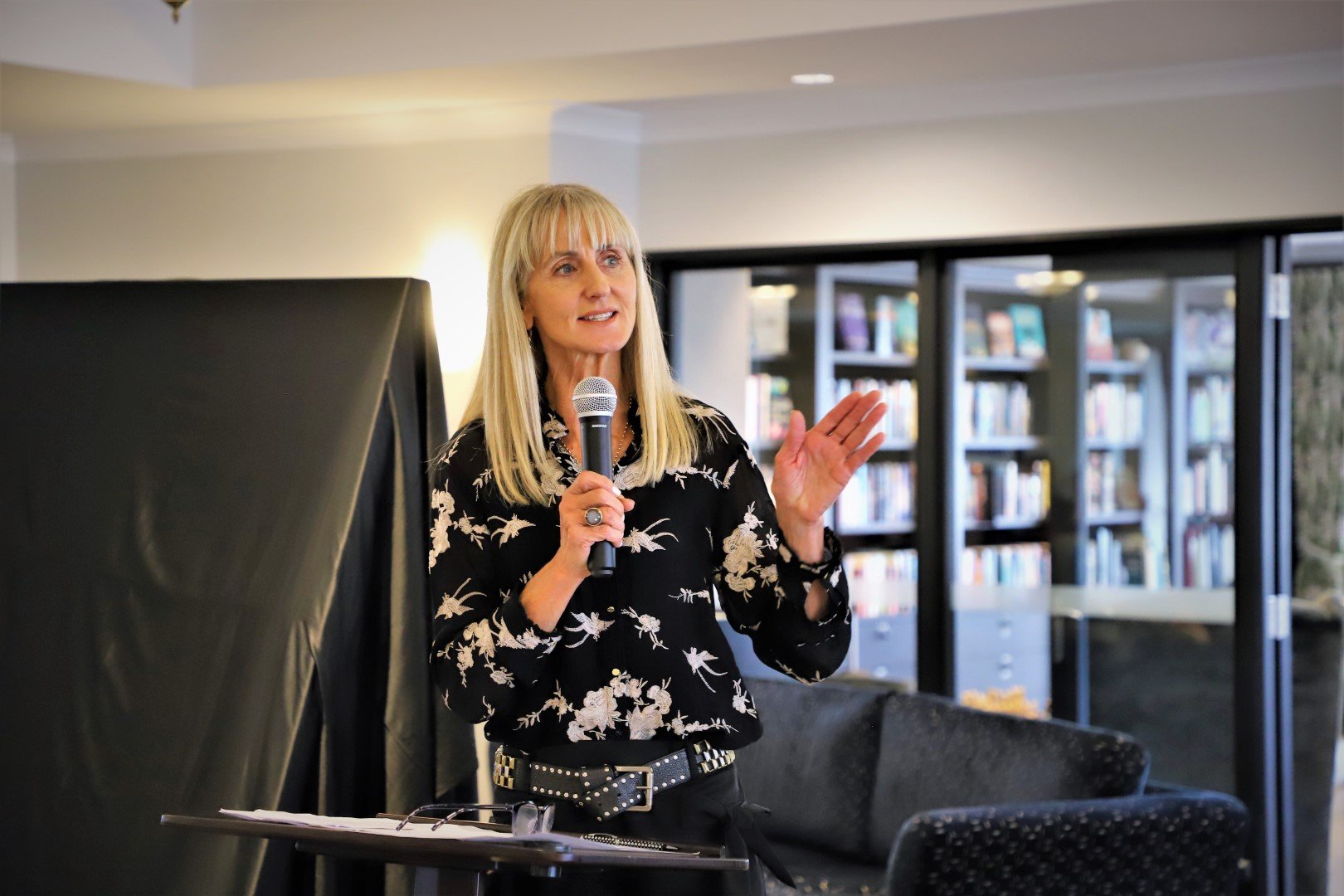 The residents were thrilled to hear more about Sir Murray Halberg from Shelley McMeeken, CEO of the Halberg Foundation which Sir Murray established in 1963.
It was the injury to his arm during a school rugby game which set Sir Murray on a course that would not only change his life, but the lives of thousands of young New Zealanders with physical disabilities.
Having achieved incredible sporting successes despite his disability, he was inspired to enable others to do the same.
“He wanted those with physical disabilities to have the same opportunities to participate in sports and recreation as able-bodied people,” Shelley said.
“He has seen first hand how sport can enhance people’s lives, providing health benefits, new skills, social networks, confidence and ambition that can be transferred into many other parts of their lives.”
Because Sir Murray’s list of achievements is so long, Shelley resorted to rattling off a few fast facts. 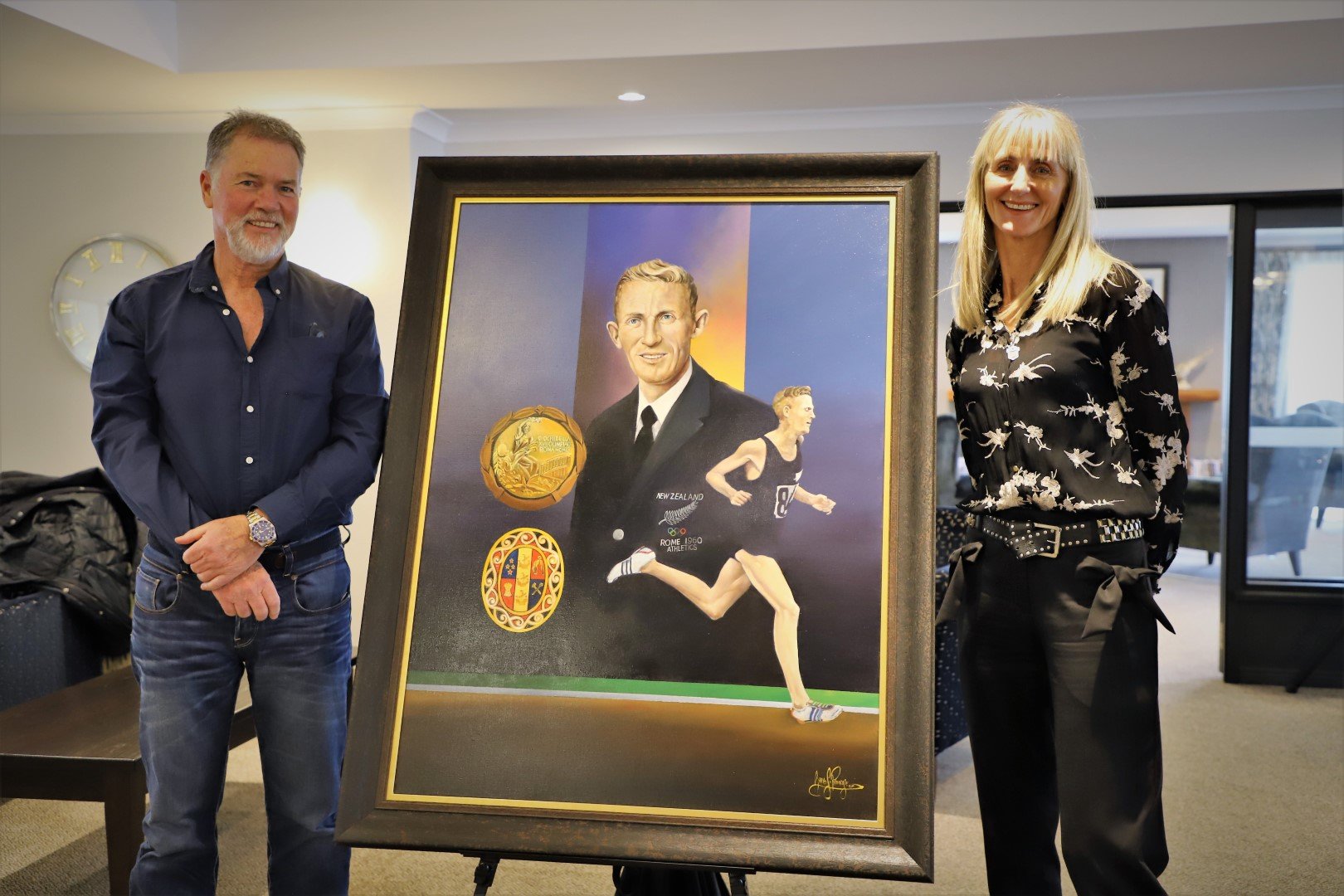 Sir Murray competed at the Empire Games in Vancouver in 1954 and the Olympics in Melbourne in 1956 before winning gold for the three miles at Cardiff in 1958. After his Olympic gold in 1960 he won the three miles at the Empire Games in Perth in 1962, set world two and three miles records and was the first New Zealander, in Dublin in 1958, to run a mile in under four minutes.
More recently, Sir Murray was awarded his knighthood in 1987 and New Zealand’s highest non-titular honour, the Order of New Zealand (ONZ) in 2008.
He was named the 94th New Zealand Olympian in 2009 as part of a four year long project to celebrate New Zealand’s Olympic history.
She turned to the audience at times to test their knowledge – and was suitably impressed with their knowledgeable answers.
“I think you people should be up here instead of me!” she laughed.
Shelley then helped artist Craig Primrose to unveil the painting to the sound of approving gasps and applause.

While it’s commonplace to refer to getting a job at Ryman as becoming part of the Ryman family, it’s quite literal for D...

A talent for ballet and a love of performing has given Murray Halberg resident Bernard Jamieson a long and busy career o...