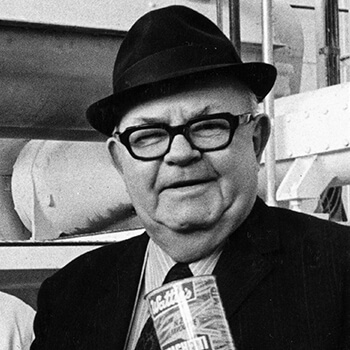 The son of Scots immigrants, Sir James was a bright student who studied accounting at night school while working as a clerk.

In 1934, he spotted the opportunity to open a local cannery in Hastings, making the most of local produce that was being shipped out of the region for processing.

With the support of local farmers and a willing local workforce, Wattie’s started out as a modest canning business but grew into one of New Zealand’s largest food suppliers and exporters.

Sir James was a shrewd businessman. He planned carefully, believed in marketing, travelled overseas to develop new markets and invested in new technology. He shared his success with the growers who supplied him and the workers who kept his factories going.

Hastings became something of a company town and James Wattie was a local legend.

He was prepared to work in any section of the factory where help was needed.

He was on a first name basis with workers, and even in his last few years he would walk through the factory or sit down in the cafeteria mixing with staff.

In recognition of his company's achievements in New Zealand and the establishment of markets overseas, Wattie was invested with a CBE in 1963, and knighted in 1966.

He was modest, approachable, considerate and generous. He acknowledged the role his wife Gladys played in his success.

He was quick to share the credit and acknowledge the goodwill and support he received from others.

By the time he retired in 1972 he had built Watties into the biggest force in the food industry in New Zealand.

When he died in 1974, more than 2,000 mourners attended his funeral and he left a huge legacy in the bay.