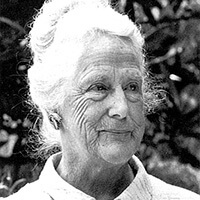 Intending to follow her father’s footsteps into bookkeeping, Evelyn changed tact and shifted mid-schooling to the Canterbury College School of Art. Here she embraced her love for art and began a career that spanned seven decades focussing on landscapes, nudes, still life and portraits.

With a desire to challenge the New Zealand art world’s traditional approach, Page became a founding member of a modernist association of artists in 1927, later known as The Group. Members of The Group exhibited unrestrained, avant-garde art annually over 50 years to introduce a less rigid artistic approach to the New Zealand art world. One Auckland exhibition of Page’s female nudes created a controversy that raged in the newspapers for weeks!

Page was the first recipient of the Governor-General’s Art Award, a Fellow of the NZ Academy of Fine Arts, and was appointed an Officer of the Order of the British Empire for her services to art in 1987.

Leaving behind seven decades worth of vibrant works, Page created innovative art that celebrated colour and portrayed the nuances of human character. She is recognized as “a painter with extraordinary zest and independence of spirit, whose lifetime response to human character and very individual use of rich colour communicates her vivid reverence and joyful celebration of life”.