Number three is a dream for three sisters, who live in or are about to move into separate Ryman Healthcare retirement villages.

Judith Gilbert, Denise O’Connell and Adrienne Lattimore can share a story or two about very busy and varied lives led -- as they travelled, raised families and settled in different places.

In 2022, the three sisters will join together once more, in a sense, as Ryman residents – though under different village roofs.

The three wonderful siblings recently met up in Christchurch at Ngaio Marsh village for a family reunion, accompanied by Judith’s daughter Clare.

Denise moved into the Papanui Ryman Healthcare village in February 2022. Adrienne is “really excited” she is to move into Kevin Hickman village in Christchurch later this year, and Judith lives as a resident at Edmund Hillary having moved there in 2017.

Judith, the eldest, was born in Invercargill and spent 30 years in Christchurch. She was a champion rider at the Christchurch A&P Show and at the behest of the nuns started a horse riding school for the boarders at Villa Maria school.

Judith had her 18th birthday in Melbourne where she met up with Jacqui Hall from Auckland and they visited Youth Groups in Newcastle, Brisbane & Cairns. On her return she worked for four years for Christchurch Catholic Youth, married Jack and later moved to Hamilton where Jack opened a pharmacy.

They had six children when Judith taught part time at Waikato Technical Institute, went to Waikato University and worked for Hamilton Budgeting Service till she retired. Judith & Jack moved to Edmund Hilary Village 2017 to be closer to their offspring, although Jack went into hospital there until he died 18 months ago. “I cannot speak too highly of the staff in their care of Jack and myself over four years,” Judith says. 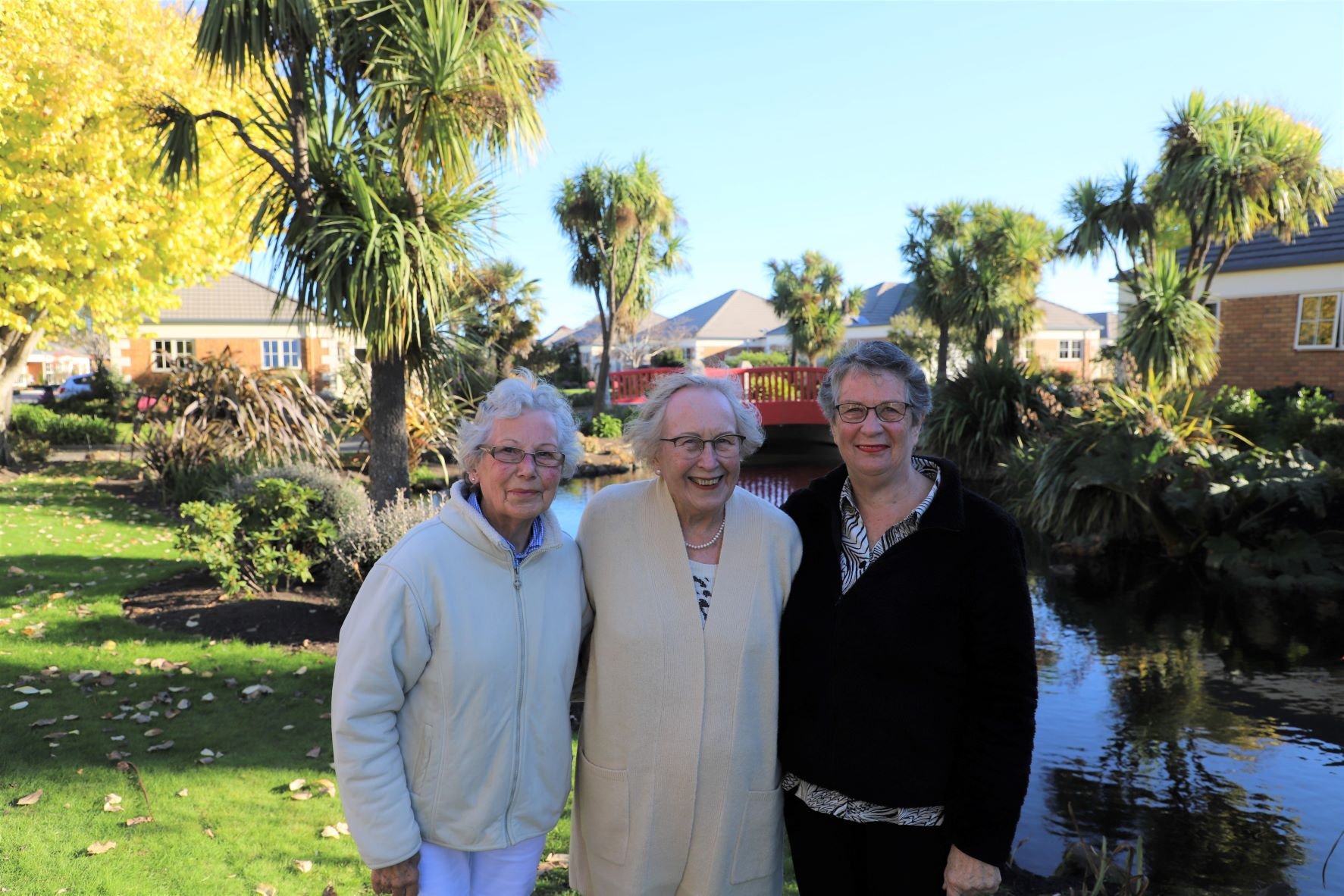 Denise and Adrienne were born in Christchurch and between them the sisters went to school at St Mary’s College and Villa Maria, then surrounded by fields.

The sisters also have another sister, Claire (the second born of the siblings), and remember well their brother Ralph, who recently passed away.

Denise trained as a dental nurse and took those skills as far away as Whakatane and Rotorua. After her marriage to Maurice they lived in Oamaru and had eight children “Maurice was a builder but when things got a bit slack they came back to Christchurch.”

Denise says she is happy her serviced apartment is relatively close to where she previously lived in Clyde Road.  For example, she can easily visit her existing dentist and doctor. With a car, I can just zoom around, I’ve got daughters and family all reasonably close.

“What I would like to say is how wonderful the staff are.  They’re tremendous, they put themselves out for you,” she adds.

Adrienne, who trained as a nurse, travelled around Europe and America. She was in Vietnam with the Red Cross, based near where there were refugee camps and at Qui Nhon, in central Binh Dinh province where there was a hospital with kiwi nurses and there was also a base for American soldiers. Adrienne married John and they had three children. She has three grandchildren.

Adrienne now lives in Avonhead, not far from Kev Hickman where she hopes to move in October. She is looking forward to the social aspects of the village, and says Ryman Sales Advisor Anthea Johnson was “simply superb” in helping with the process.

Given family weddings, often involving their children, the three have had plenty of occasions to keep up.  There will no doubt be further family reunions and reminiscences of their early family days and what amazing lives they are still leading.