After a short time spent in James ‘Curly’ Easton’s company, it’s clear that his sense of humour has in no way been dulled by the passage of time.
Despite a horrific wartime experience as a prisoner of war, who survived three and a half years of starvation, sickness and beatings at the hands of the Japanese in WWII, it was then that he secured his reputation for coming up with a well-timed quip or humorous song to buoy his mates along during those hellish years.
A year of that time was spent on the Burma railway where the men would be made to work 16 hour days with barely any food in their bellies and suffering from all manner of tropical diseases.

His ever-present sense of humour is just one reason why he has such a big place in the hearts of his surrogate family, a group of friends he has accrued after many decades working the showgrounds up and down New Zealand.
He has outlived his wife Maureen and only daughter Vicky and it’s his ‘show family’, plus his daughter’s best friend Lyn Hastie, who join him each year on his birthday, including yesterday for a fantastic afternoon tea to celebrate his 105th.
And what better way to mark such a milestone occasion than finding ways to give him a good laugh.
Both his caregivers at Grace Joel Retirement Village and his friends rose to the challenge this year with a series of presents designed to give him a giggle.

Above: Jim surrounded by his 'show family' (from back left, clockwise) Lyn Hastie, Glenda and Glen McPhee, Cameron, Darlene, Daniel and Russell Jones and Below: Jim's birthday mug from Regina. 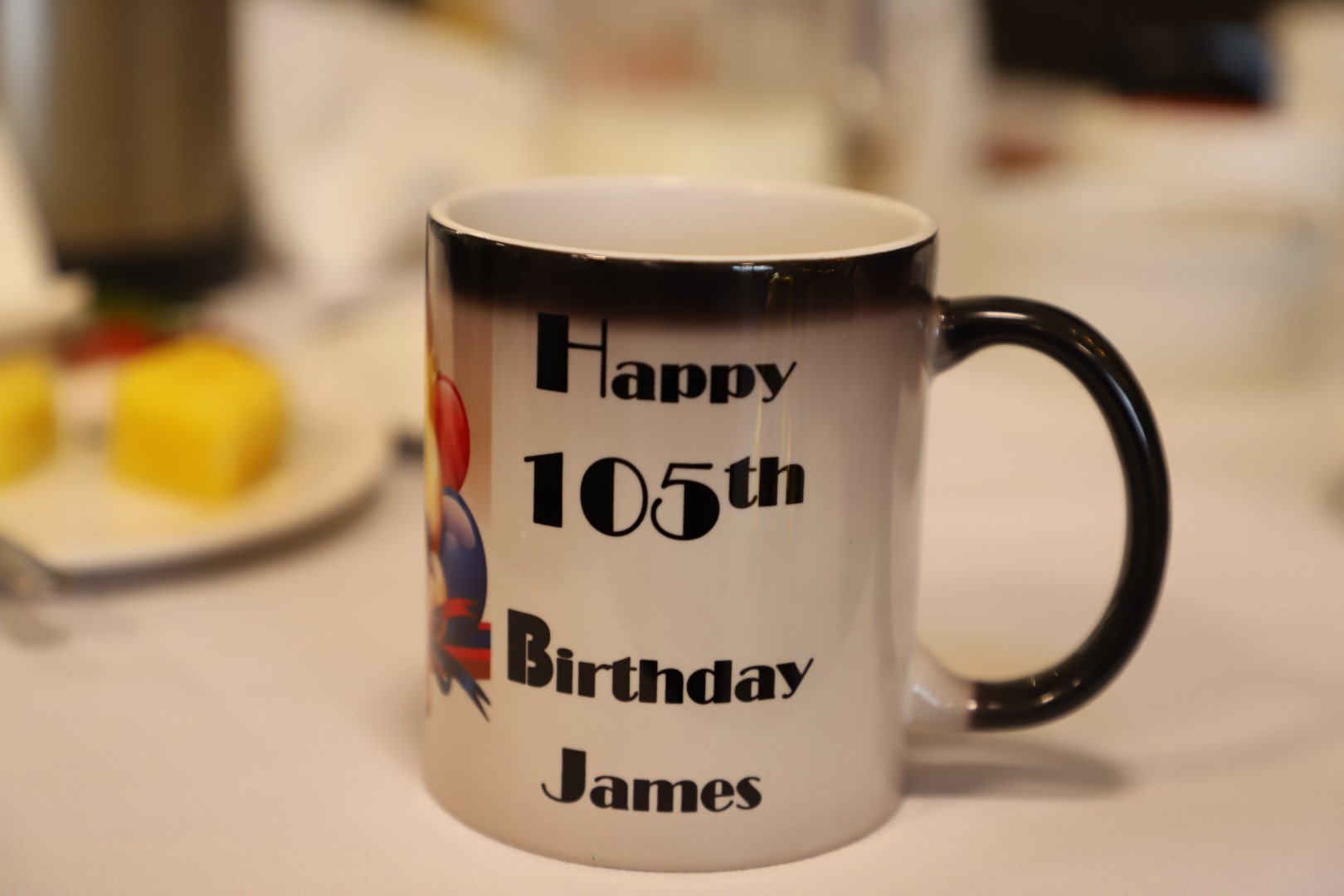 First up was from his favourite caregiver Regina Gounder, who gave him a new mug for his daily lunchtime soup. Not just any mug, this one reacts to the heat and simultaneously reveals an image of Jim’s face on one side plus the message Happy 105th Birthday on the other side!
Old friend Russell Jones and his wife Darlene had a few surprises lined up for Jim.
Matching Jim’s sense of humour, and to give him some memories of the showground days, they wrapped up some of the items Jim used to use as prizes on his stalls which Russell had recently found in a storage shed.
The eclectic items included a silver ornamental poodle, a ceramic reindeer and a stack of coasters, plus the return of a book that Jim had lent him a while back!
“Everyone wins a prize!” laughed Russell, referring to one of Jim’s old refrains from the showground.
“I think it’s the first time I’ve seen him lost for words!” said Lyn.
There was also a toy e-type Jaguar car.
“Jim mentioned he wanted a Jag,” said Darlene, adding out of earshot from Jim: “We’re actually going to try and arrange for him to go for a ride in a Jaguar in the New Year but thought he could have this in the meantime!” 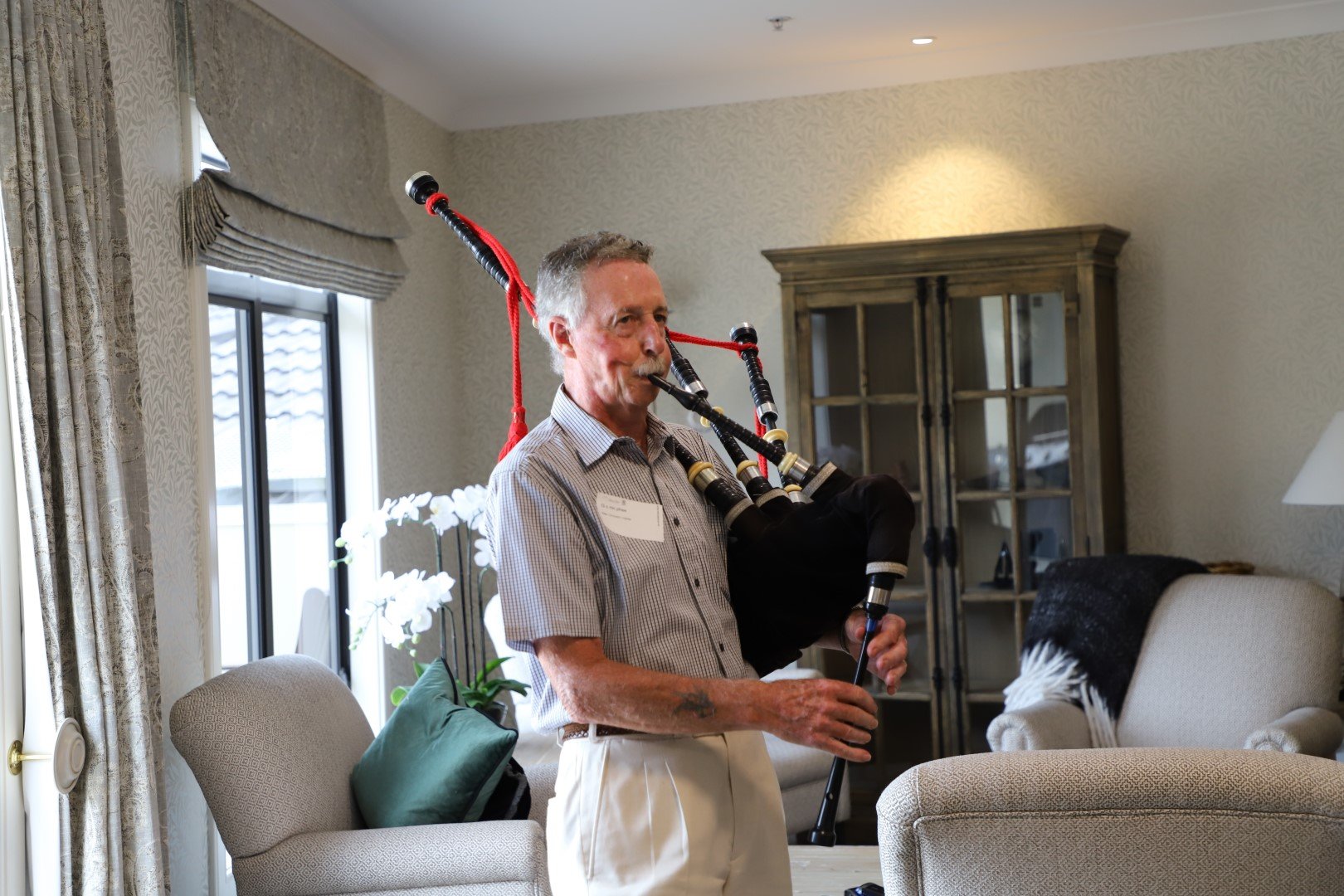 Glen McPhee on the bagpipes

Glen and Glenda McPhee had another surprise for Jim, who was born in Kirkentilloch, Scotland, with Glen bringing out his bagpipes (above) to play Happy Birthday as a special treat.
Then it was time to cut the cake – Jim’s favourite, chocolate, of course. And another rendition of Happy Birthday with everyone singing along. 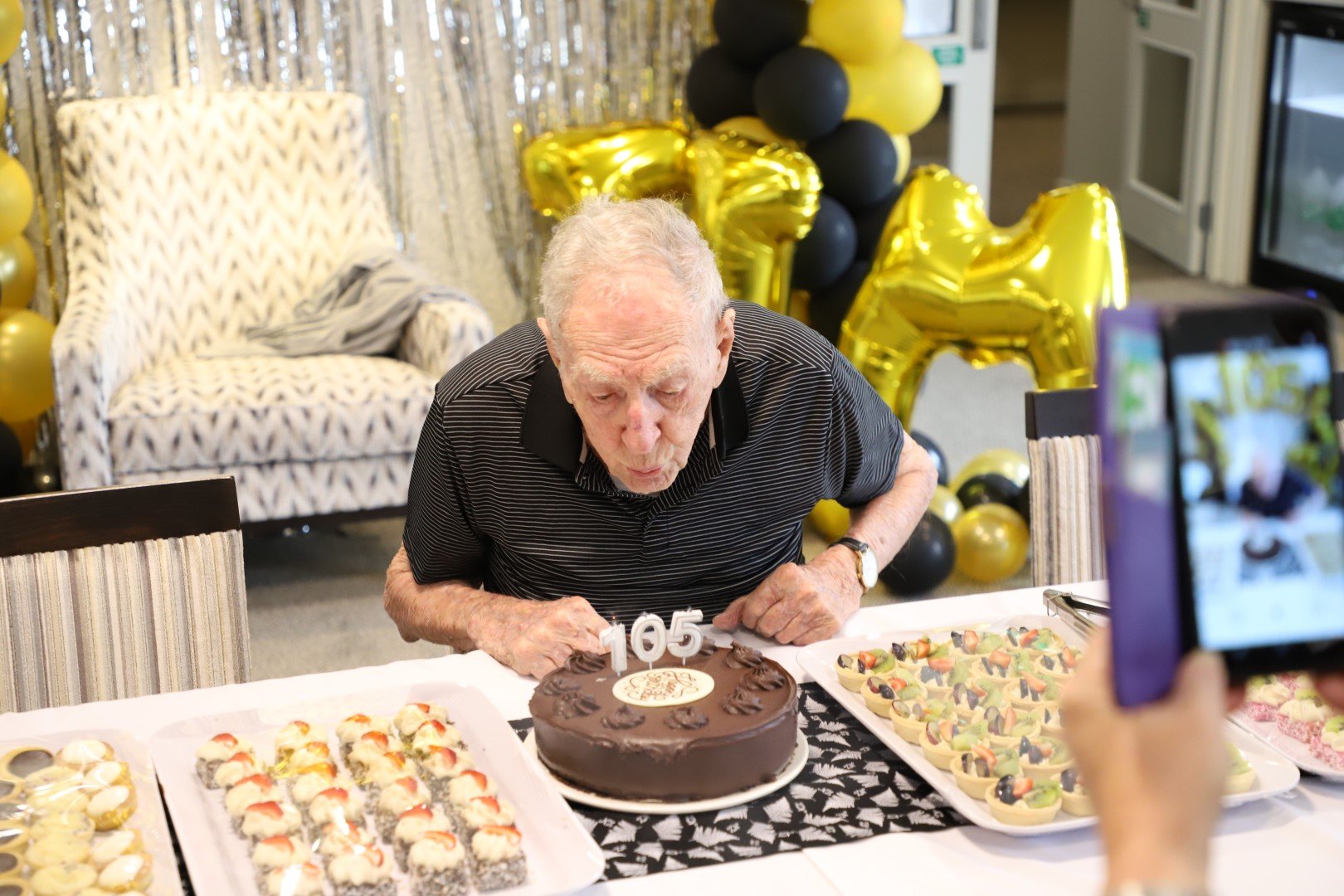 Blowing out 105 candles! (above) and sharing yet another wisecrack (below) 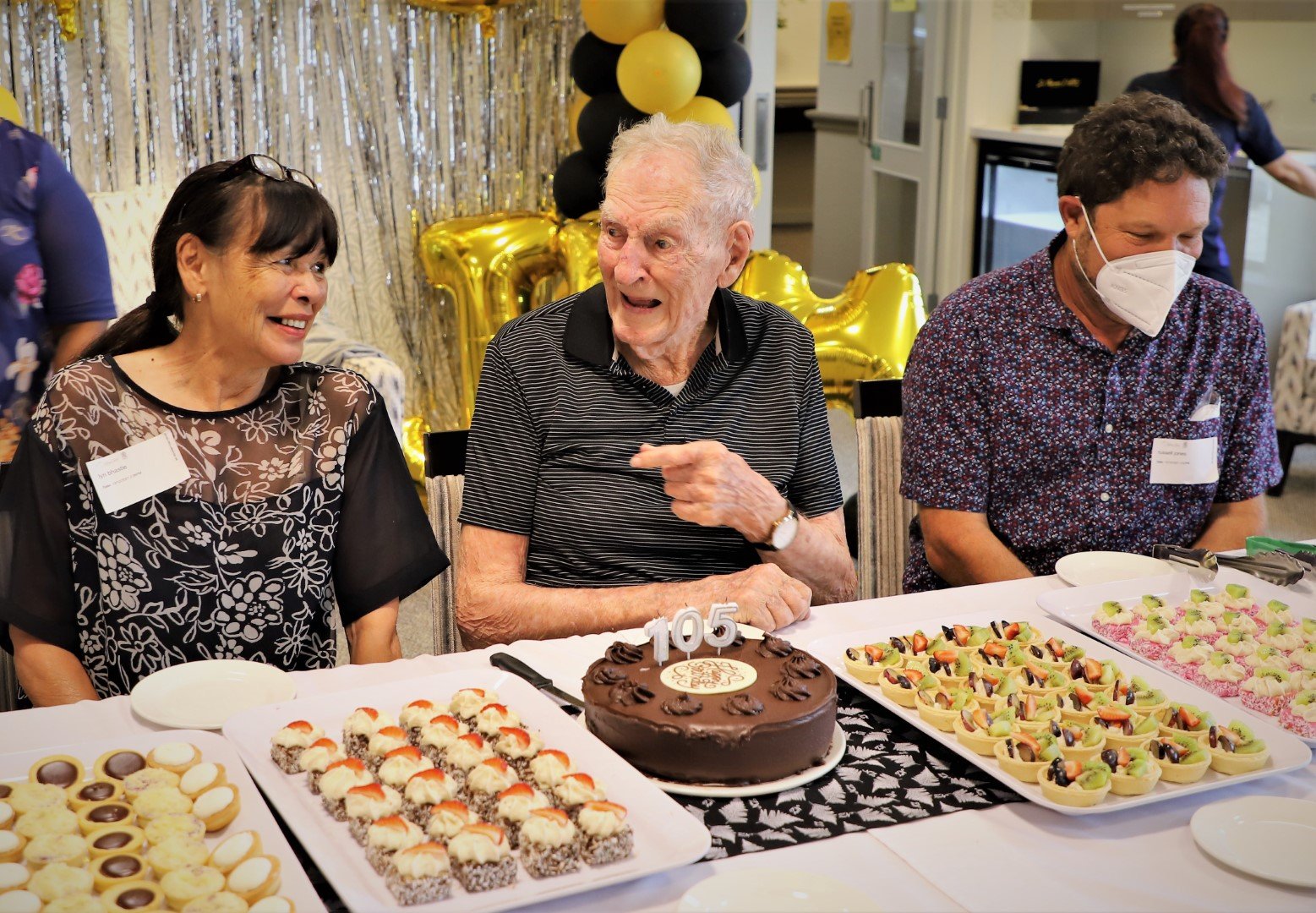 It didn’t take long for Jim to return to his wisecracking self, and share his grandmother’s wise advice.
“It’s better to fart and stink a little, than bust your arse and be a cripple!”
From the collected groans around the table, it’s advice he has shared many times before!
That wasn’t it for the 105th celebrations though. Jim was also looking forward to a visit from film director David Blyth who originally interviewed him as part of his series of war documentaries, Memories of Service.
Now he is returning to speak to him again for a follow-up interview, seven years on, drawing parallels with his own grandfather, also nicknamed Curly, and who lived to 105.
Said David: “It’s a postscript moment of Jim’s extraordinary life, that involved extreme physical and psychological hardship, but then led onto an incredibly productive life.
“Jim had met or knew of my grandfather, Curly Blyth, and with Jim reaching 105 too it has parallels with his story.”
There is one crucial difference though, according to Jim.
“I’ll see you at my 106th!”