When former POW James Easton was released from the WWII prison camp, medics told him the three and a half years of near-starvation and ill treatment would likely knock at least 10 years off his life.
But defying all predictions to the contrary, James has just celebrated his 104th birthday and while he may have slowed down a little and require a walker to get about, his wit is just as quick as ever!

Asked what it feels like to be 104, he immediately replied: “Just the same as 103!”
A friend asked him if he’d received another card from the Queen and he had a quip for that too: “You only get them every 100 years so I’ll have to wait another 96!”
The team at Grace Joel Retirement Village put on a special afternoon tea with chocolate cake for James, officially the eldest resident in the St Heliers village. 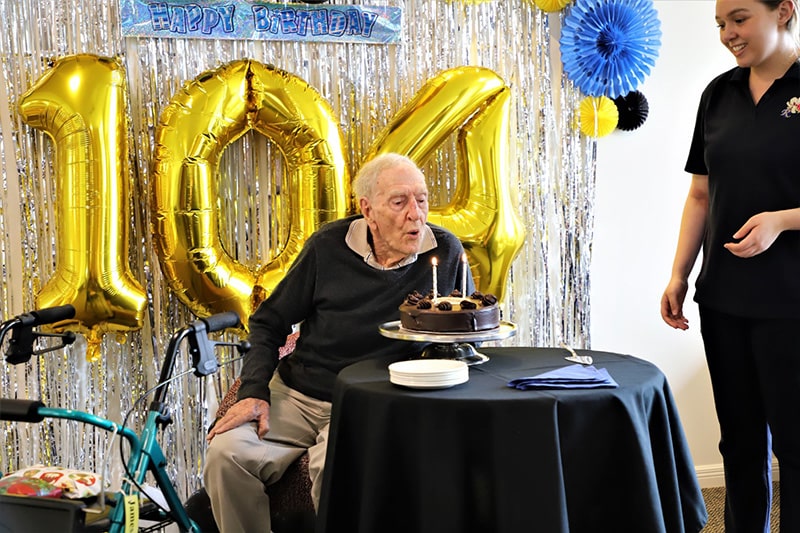 James is relieved there were only two candles out of a potential 104 to blow out!

Having outlived his wife Maureen and only daughter Vicky, his daughter’s friend Lyn Hastie and colleagues from his showground days are his family now and they were thrilled to celebrate the special occasion with him.
Many of them worked for him for decades running game stalls such as the shooting galleries or laughing clowns, touring showgrounds around the north island for A&P Shows, Easter Shows and the like.
The night before his big day, two of his friends, Max Campbell and Robb Kemp, continued the tradition they have upheld for the last decade or so: “We took Jim to his favourite Chinese restaurant in Balmoral for spicy chicken wings,” said Max, adding: “I bring him a fix of chicken wings every week too!” 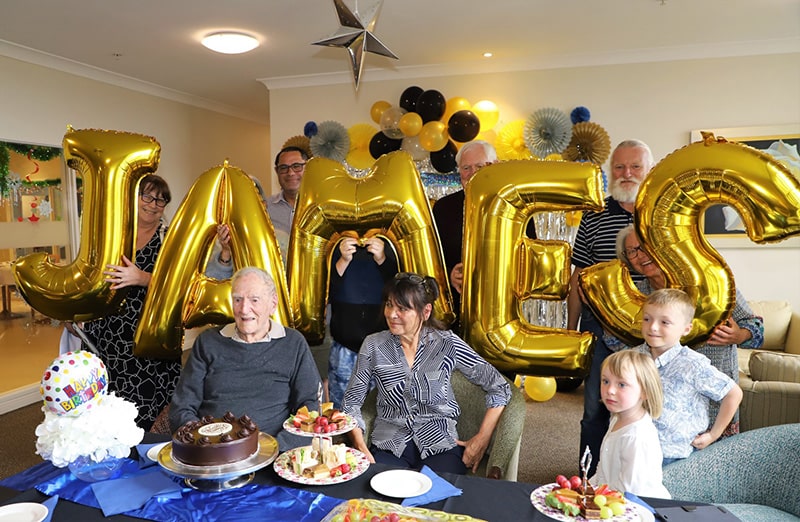 Lyn Hastie said they all agreed that the quality they love most about James is his sense of humour.
“He’s got a very sharp sense of humour!” she said.
Said Max, who recalls James as a boss who was tough but fair: “Every time I come here I always leave having had a good laugh. He’s always got something witty and funny to say.”
Max’s wife Christine credits James for bringing in equal pay for the women who worked for him 45 years ago, well before it was the norm.
“He always had a soft spot for women,” she laughed.
Robb’s wife Cavell added: “He’s been like family to us.”

With some of the Grace Joel team who look after him

James credits his sense of humour for getting him through the hellish years building the Burma railway as a captive of the Japanese during WWII.
He and the other men would have to work 16 hour days doing hard physical labour in tropical conditions whilst suffering the effects of numerous bouts of malaria, dysentery and the dreaded cholera.
James would often come up with a well-timed quip or break into song during the long marches or gruelling work.
By the war’s end, James’s weight was down to 47kg when normally it would be closer to 80kg.
And while the medics predicted a shortened life expectancy, James has a reason for his longevity.
“I have never smoked or drank and I do a lot of reading. That’s kept the Alzheimer’s at bay.”