Hearing the story of Bruce McLaren told by his sister Jan was just one of many Auckland Heritage Festival events about village namesakes organised by Ryman Healthcare aimed at delighting residents and visitors alike.
Jan, who is Bruce’s younger sister and runs the Bruce McLaren Trust to preserve his memory, told the socially distanced audience how her brother overcame two years in Auckland’s Wilson Home suffering with Perthes disease to become an international motor racing legend.

With father Les an engineer, racing enthusiast and service station owner it was no wonder that Bruce would be a petrolhead too.
“The family all had petrol in our veins,” said Jan, who admitted she still gets a thrill from the smell of Castrol R oil.
Despite being in traction to try and prevent his leg from shortening, Bruce was included in family trips out to Muriwai beach which later became the location of his first race – and first win. 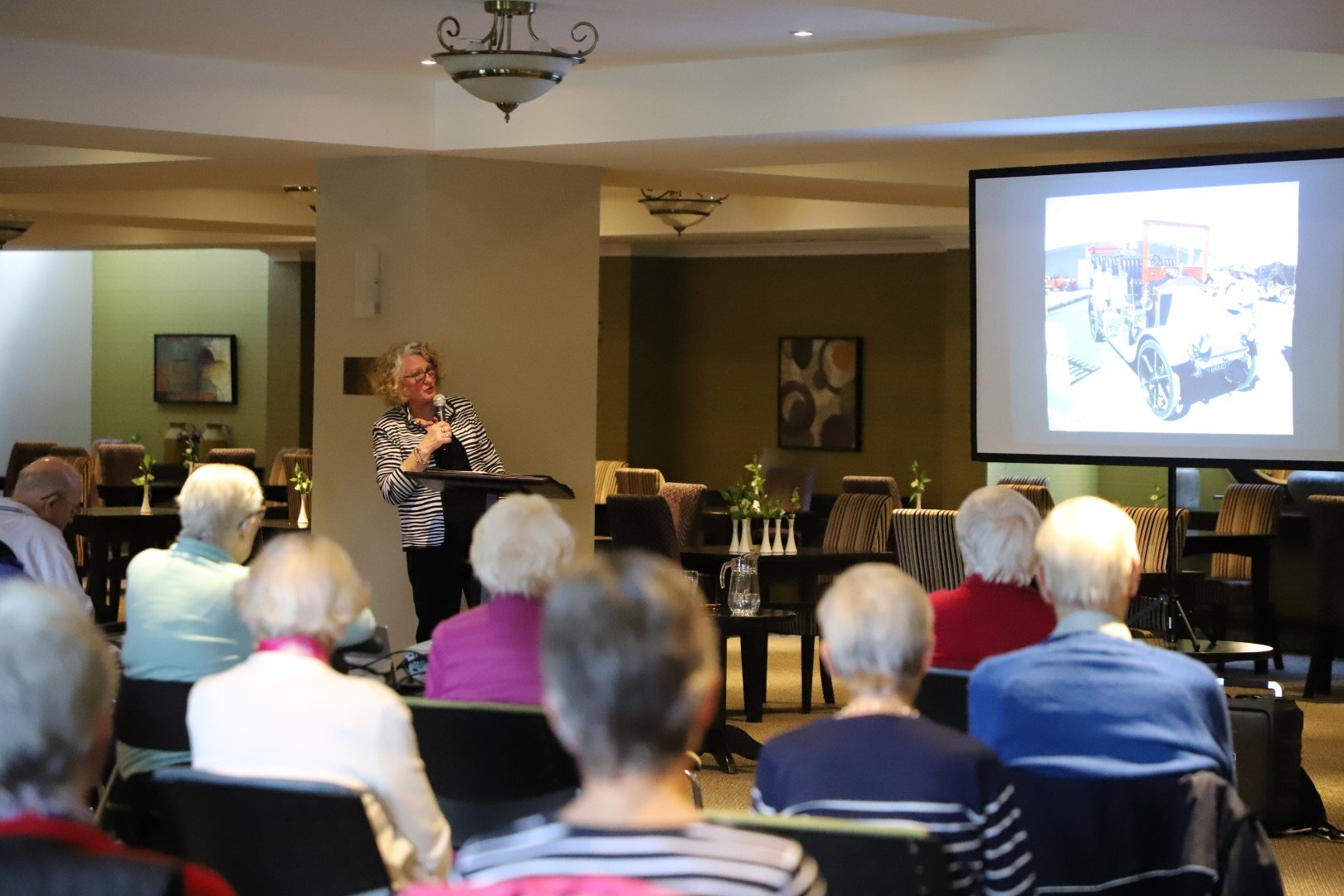 From these humble but supportive beginnings, Bruce quickly got himself noticed and secured a scholarship giving young Kiwis the chance to drive racing cars in Europe.
He earned a spot in Cooper’s Formula One team and in 1959 went on to become the youngest person ever to win a Grand Prix, at 22 years and 104 days old.
“It took 44 years for his record to be broken,” Jan said, her pride still clearly evident.
Bruce also won the 1960 Argentine Grand Prix and the 1962 Monaco Grand Prix and the following year he achieved another major milestone when he founded his own company, Bruce McLaren Motor Racing Limited.
After a failed attempt at the Monaco Grand Prix in 1966, the McLaren team entered the Belgian Grand Prix in 1968 with Bruce at the wheel.
“This became his first win driving his own car designed and built by his own company. There was only one other person to achieve that which was Jack Brabham,” Jan said, referring to the Australian driver and Bruce’s mentor.
Bruce’s list of impressive achievements were cut short in 1970 with his tragic death at Goodwood while testing the latest McLaren car.
While recognition for Bruce is somewhat of a ‘sore point’, Jan said she was extremely proud of his Guinness World Record held for 44 years and being posthumously awarded the Segrave Trophy, an award for a British national who demonstrates ‘Outstanding Skill, Courage and Initiative on Land, Water and in the Air. 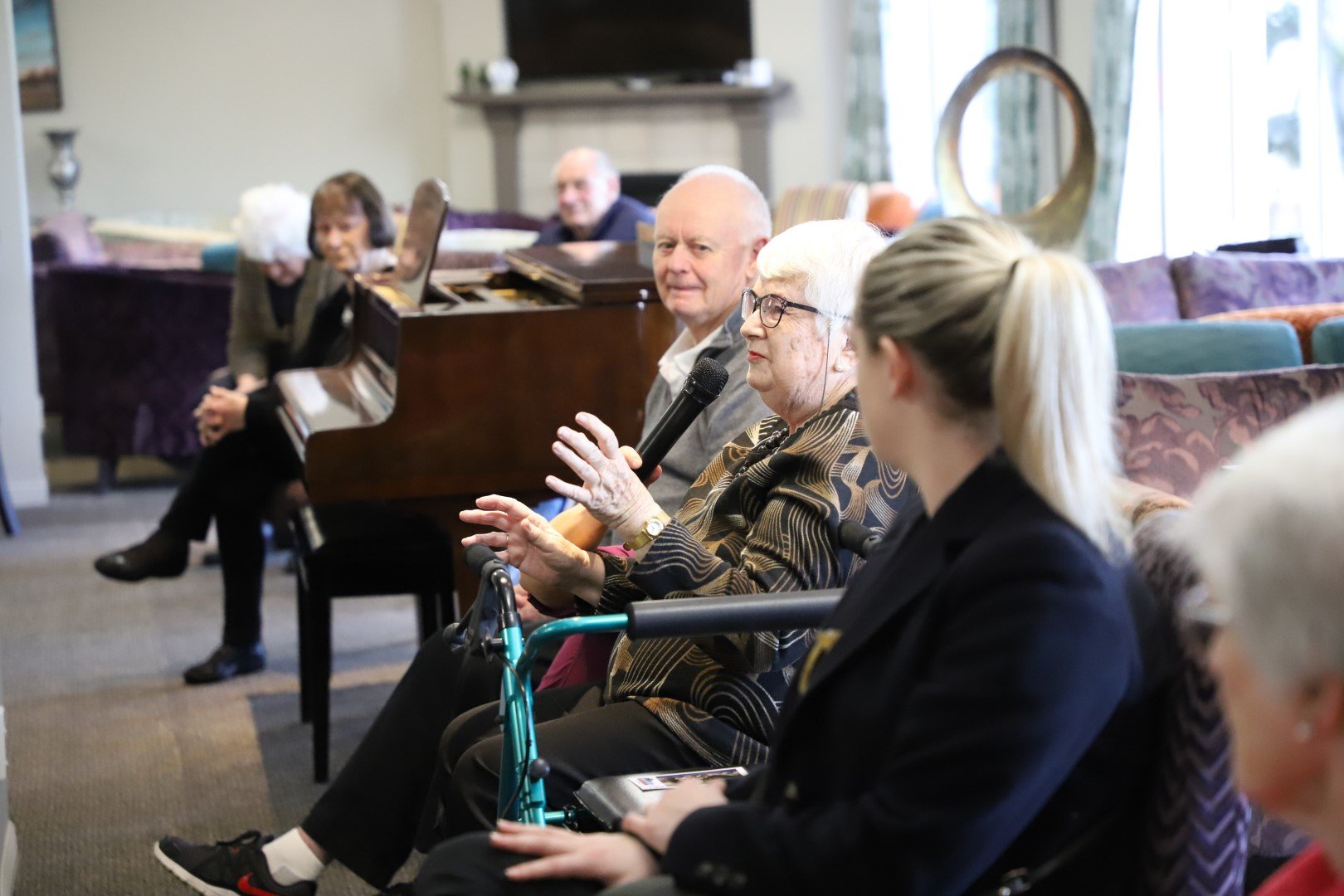 Jan took some questions from the floor and was delighted to hear one visitor to the village, Elaine Gobbie, share her encounter with Bruce many years ago, a photograph of which had ended up in the Weekly News.
“I was part of the pit team for BP and he invited me to do a few laps in his car,” Elaine said.
“He gave me a crash helmet and I sat on his lap with his hands either side of me on the steering wheel.
“He was a heartthrob too and a single man but I was engaged to be married,” she said, adding: “It was a bit of a tight squeeze but it was exciting!”
“The stories keep coming and they’re really special moments,” Jan laughed.
Jan also organised for three vintage cars to be at the village for a real nostalgia buzz. 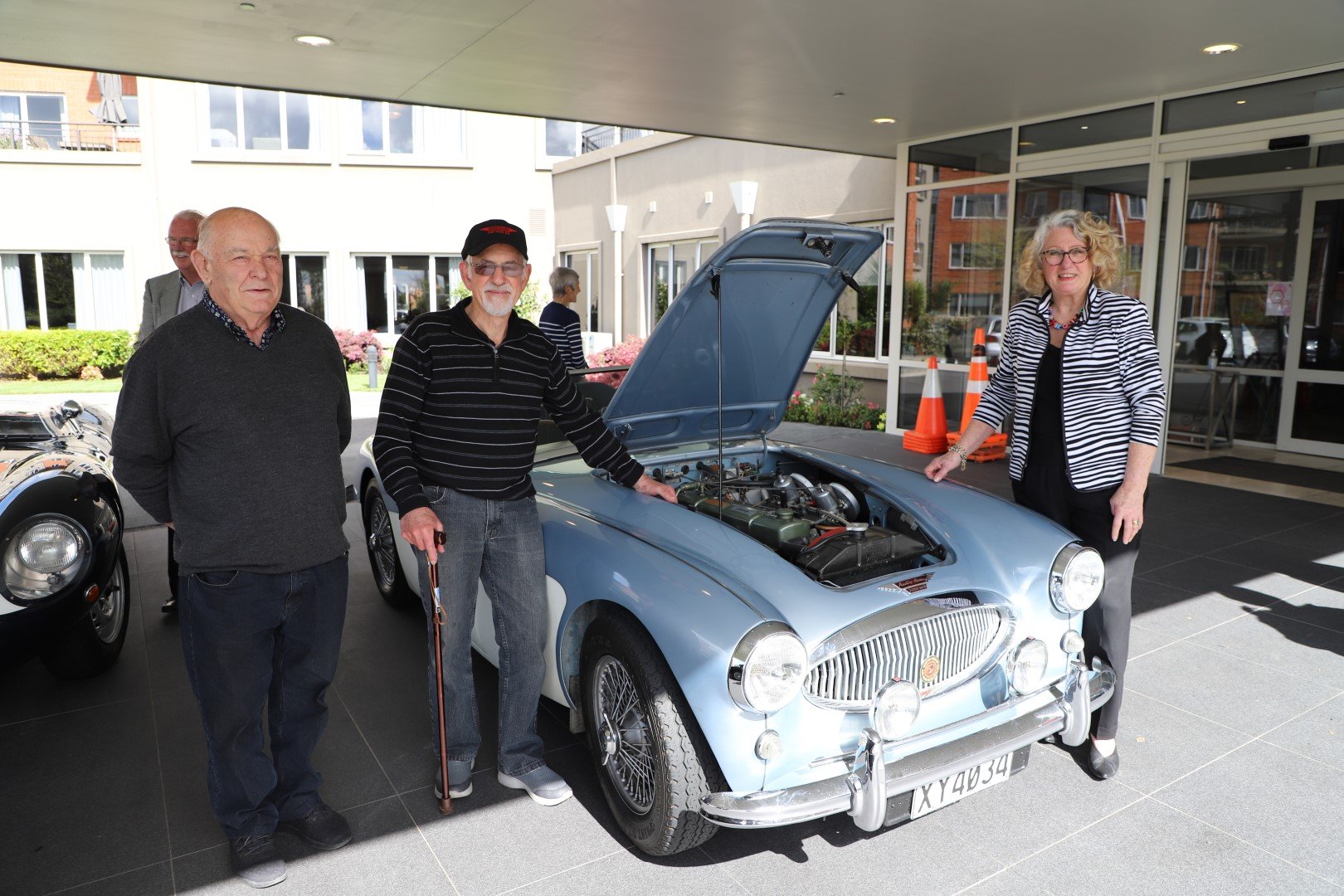 Allan Horner’s Austin Healey brought back memories for recently moved in village resident John Wilson who had owned a 1954 four cylinder Austin Healey which he painted racing green.
John said he took his future wife for a spin but faced a problem when they got a flat tyre.
“It was so low to the ground I couldn’t even get the jack underneath it. I had to drive it up onto a fence post!” he said, adding that he later sold it for the princely sum of £1000.

Ryman Healthcare was founded in Christchurch in 1984 and owns and operates 36 retirement villages in New Zealand and Australia. Ryman villages are home to 11,600 residents, and the company employs more than 6,000 staff.

The Anzac service at Bruce McLaren in Howick last week, was a special day for the whole village and a topic close to the...

With over 43 people getting vaccinated per hour, Bruce McLaren residents and staff were rolling up their sleeves in drov...