As a resident of Murray Halberg Retirement Village, it was only fitting that Olympic medal winner Barry Magee should join seasoned journalist Murray McKinnon at a Q & A themed on New Zealand’s golden era of athletics.
The event was organised as one of many Auckland Heritage Festival events about village namesakes organised by Ryman Healthcare to delight residents and visitors alike.
Murray McKinnon, who covered eight world athletics championships in his career, gave attendees a brief biography of Sir Murray Halberg, who was unable to attend.
Now 87, Halberg won gold in the 5000 metres at the 1960 Rome Olympics plus two golds in the three mile events at the 1958 and 1962 Commonwealth Games.
This was despite a devastating injury caused during a tackle in a school rugby game as a teenager.

A fellow runner from pioneering coach Arthur Lydiard’s stable was Barry Magee, who won bronze in the marathon at the same Olympics as Halberg won his medal.
Barry, who has lived at the Lynfield village for two years, shared his thoughts on why his contemporary had carved out such an impressive legacy.
“That tackle ruptured the veins and arteries in his left shoulder and he had to have a two litre clot of blood taken out.
“He would have been dead within 24 hours if they hadn’t taken it out.
“Fighting for your life like that gives people like Murray Halberg something that us normal people don’t have.”
With good humour Barry said out of the 100 times he had raced Murray over the years Murray had won 92 times and he had won eight.
“I was very proud of that eight though!” he laughed. 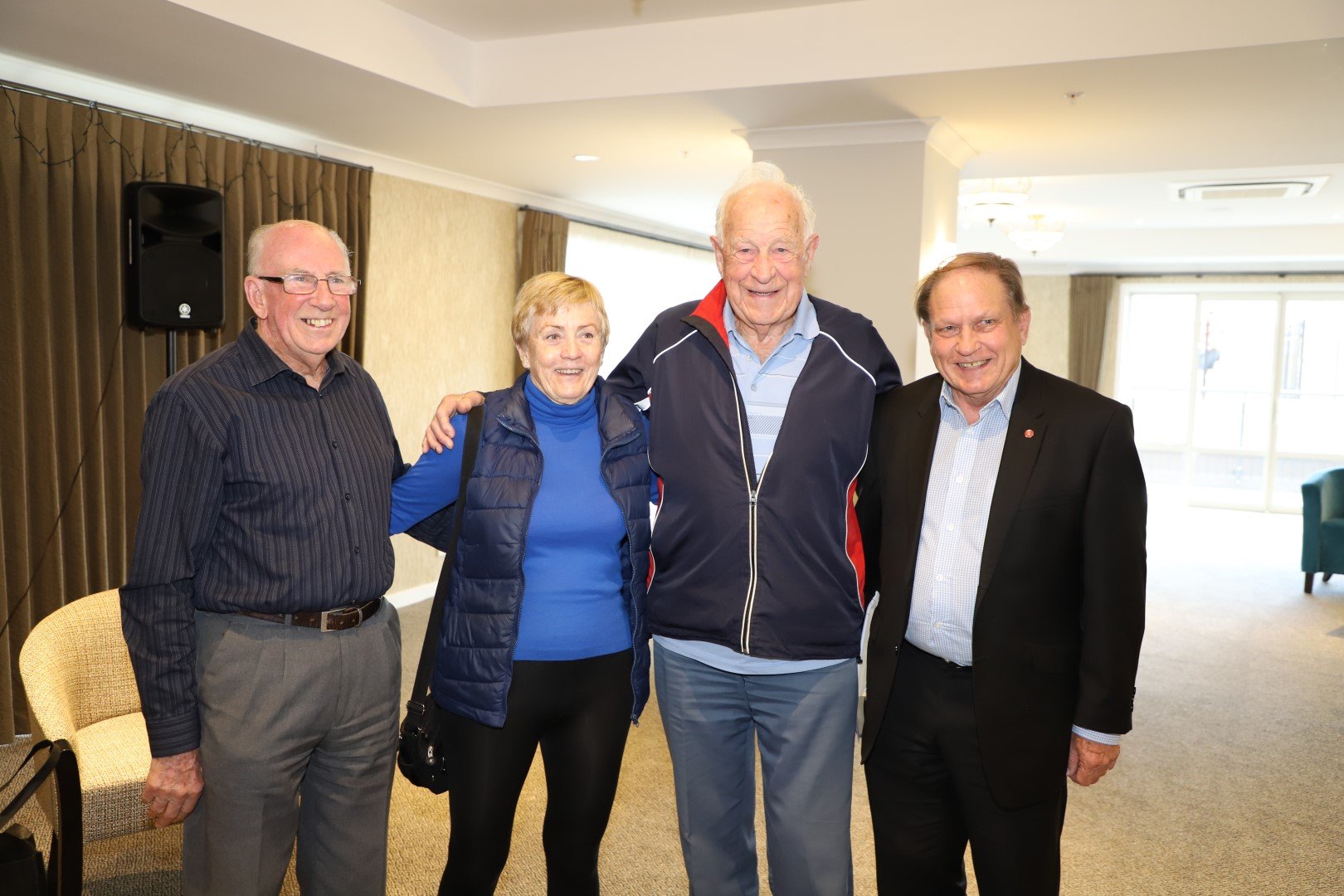 Another attendee, NZ six mile champion 1956 Bill Rodger, shared stories of the time he and Murray worked on a farm in Australia building dingo fences with the idea of training at the same time before the Melbourne games.
“It was a bit of a mistake because the work was too heavy for distance running. Most of the time Murray would cook for us!
“At the end the farmer came over to tally up our pay. It was 25c for every post you cut and 30c for putting them in the ground. With the food added into the equation he said we owed £35!”
Murray’s teammates would help him tie his laces or cut his meat into bite sized pieces but when it came to running, Murray was unbeatable.
“He was a tough character and not many could beat him by the end of the race,” said Bill invited Murray to be his best man at his wedding.
“I had the same problem with Barry by the way! He always beat me just going to the straight!” 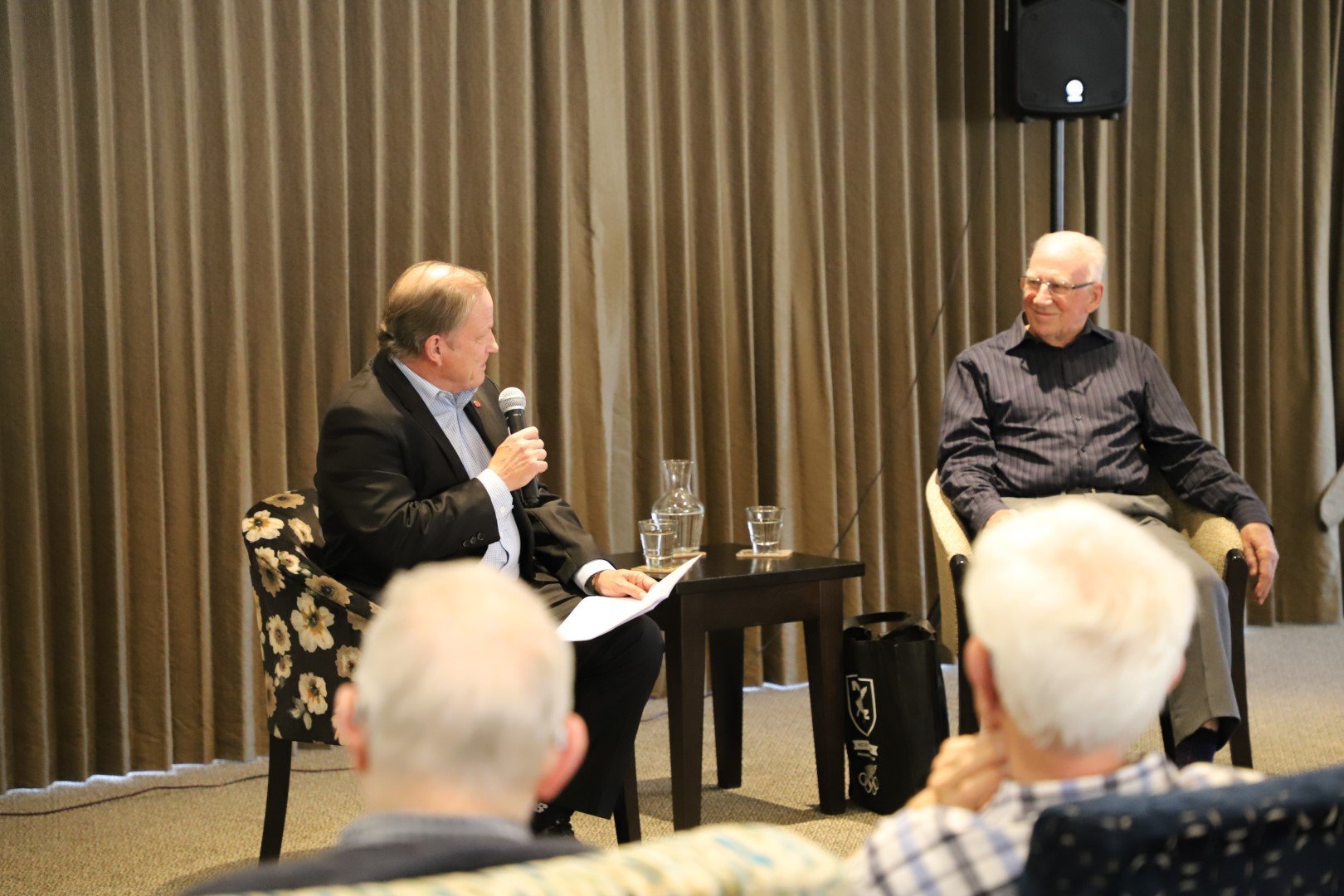 Questions from the crowd included how much shoe technology had improved running times (3-5 minutes on a marathon according to Barry) and the psychological aspect of the sport.
“I’d do exactly what Arthur Lydiard told me!” quipped Barry before detailing the drama of his medal-winning 42km run.
“In Rome, the Russian champ Sergey Popov caught me up at the 12-14km mark. I was in a bunch of eight or nine which became seven, six, five, four… At 30km it was Popov and Barry and I sprinted at 32km.
“That race was 11 years in the making.”