Village aesthetic suits this amateur artist to a tee

It was just a coincidence that art-lovers Brian and his wife Jenny chose to move into Grace Joel retirement village, which is named after the Dunedin-born artist.

Their St Heliers home was just down the road from the village and different health needs had prompted a change.

“My wife developed cancer and my eyesight was failing so we couldn’t stay in our house,” says Brian, 91.

“By chance Jenny had been up here and had replied to an invitation to look at the place three or four years ago.

“She was a very good organiser was Jenny, so the next thing was we were booked to move in here and we had these two studio units put together as one.”

That was back in July 2017 and the couple soon made their corner of the village look and feel like home.

They took the kitchen out of one of the units to make it the bedroom and used the other unit as their living area, turning the second bathroom into a storage room.

Two beautiful silver candelabras, made by Jenny, take pride of place on the window sill. Jenny earned a diploma in fine art at Canterbury University, majoring in silversmithing and embroidery, says Brian.

Then they had to decide what to do with the stack of paintings they had amassed, many of them Brian’s own works.

Although Brian worked as an engineering consultant for most of his working life, he is actually a talented artist.

“I only got through school cert because I could draw,” laughs the former Auckland Grammar student.

“Looking back on it I probably should have been an architect not an engineer.”

The hallway outside their apartment turned out to be the perfect gallery for Brian’s paintings, and reveal his experiments in a range of styles over the years.

There are etchings and watercolours ranging in topics from surreal New Zealand landscapes, to old weatherboard houses, flowers and scenes from the couple’s travels to Ecuador and Mexico.

“It was the old Auckland houses which started me off, drawing those, and I went to night classes on etchings at the Elam School of Fine Arts,” says Brian.

“Freemans Bay was just a treasure trove of places and I tried to capture some of them.”

His experiments with watercolour were equally successful with Brian even holding several exhibitions to display and sell some of his art.

“I enjoyed just doing it, it’s something which I liked and there’s a pleasure in achieving something that does please you,” he says.

There was one particular set of landscapes which Brian displayed in Parnell. The common thread in the series is a precisely drawn colonial-style house set amid brightly coloured hillocks with unusual tree forms.

The inspiration for the landscapes came from a surprising source.

“I found a magazine on the side of the road with beautiful young women in it and I took that and made a landscape out of it,” he says with a chuckle.

“I had quite a successful exhibition and sold a few of those ones.” he adds.

The Village Manager Murray Parkes liked them so much he asked if he could have a couple to display in his office where they now take pride of place.

As Jenny’s illness took hold Brian was even more grateful for the security of the village and the support of its staff.

“All her health needs were met here in the village and while I didn’t need much help myself I knew it was there if I needed it,” says Brian.

“It was a great move coming into the village. The staff are extraordinary and they all know my name,” he smiles.

Brian’s eyesight has suffered quite badly from macular degeneration and glaucoma so while painting is no longer an option he takes comfort knowing his works are all around him. 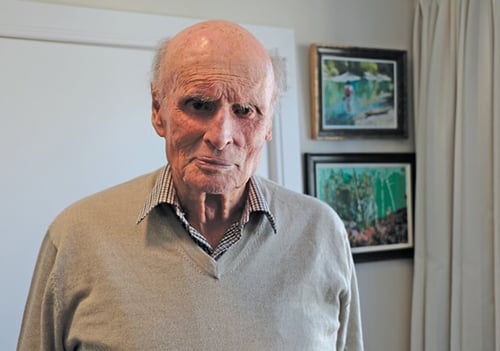 And crucially his independence remains intact.

“I go down to the lounge every night to meet the other residents, and I go for a walk every day or I take part in the exercise class.

“One of the great things about here is having the medical centre next door. Tomorrow I’m getting a hearing check and not being able to drive any longer it’s a wonderful advantage to just take a few steps out the front door.”