The team and residents of Bert Sutcliffe gathered at a laughter-filled Happy Hour yesterday to celebrate the launch of the Justin Timberlake video many of them starred in.
Ryman Chief Executive Gordon MacLeod was thrilled to finally be able to join the party, which had to be postponed from its original date in August due to the second lockdown.
In that time, a few more things were added to the list making it a jumbo celebration – the village’s fourth birthday, the opening of a brand new craft room and two awards.

Firstly, Bert Sutcliffe was recently announced a finalist in the Aged Advisor awards gaining 98.2% positive reviews; and secondly, it was a belated celebration for Village Manager Marika Laflamme’s fantastic win of Ryman’s Kevin Hickman award.
The award is named after Ryman’s co-founder Kevin Hickman and recognises the person at Ryman who best embodies his values of kindness, excellence, leadership and care.
Only one thing was missing – Marika!
The much-loved manager had come down with cold symptoms the day before, and with Ryman’s strict rules in place to protect residents from the ever-present threat of Covid-19, she sensibly stayed away.
But while Marika’s new dress and heels sadly remained hanging in her wardrobe, the red carpet was rolled out and the residents and team members got dressed in their finery and made their best effort to party on her behalf!
Assistant to the Manager Heather Booth opened proceedings for Gordy who started by thanking all the residents for their patience and cooperation during what had been a challenging year.
“You may think I say this to everyone but this is my favourite village!” he said, prompting a big laugh. 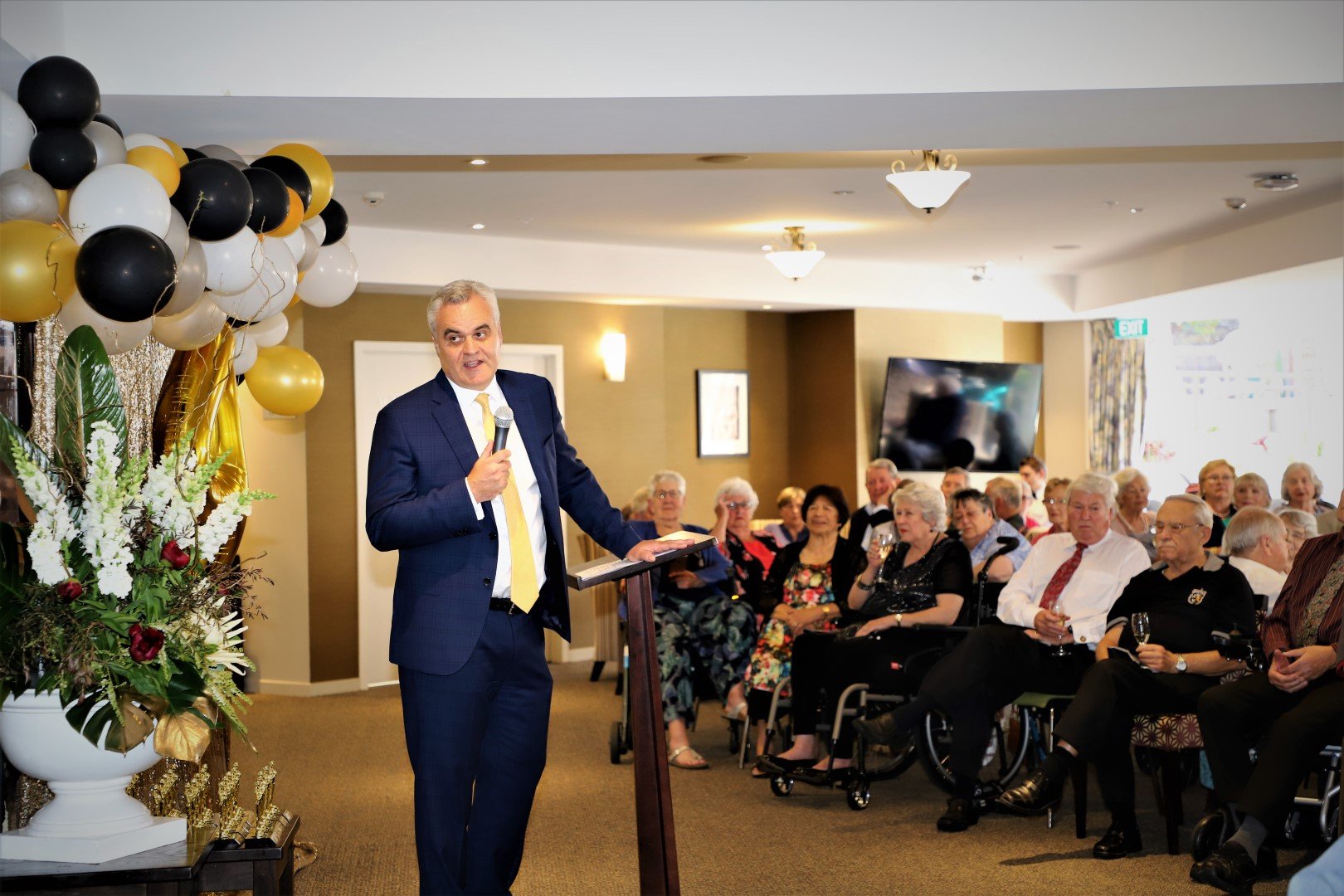 Above: Gordy charms the residents before handing out the mini-Oscar awards (below) 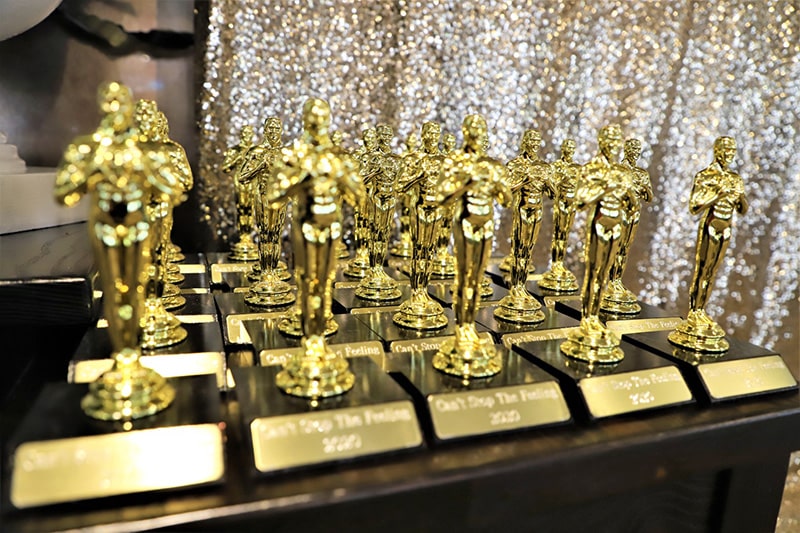 He went on to pay tribute to Marika’s hard work and leadership which earned her the well-deserved win.
“The Kevin Hickman award is our most prestigious staff award and recognises Kevin’s values of kindness, excellence, leadership and care.
“That’s Marika to a tee.”
Next, was the chance to thank the stars of Can’t Stop the Feeling.
Continuing Ryman’s trend of making replica videos which began with Pharrell’s Happy video, the in-house production team Sharn, Suresh and Korin worked with residents and staff over an intensive two weeks at the end of 2019 to create Justin Timberlake’s hit with Norris Aitken playing Justin’s role. 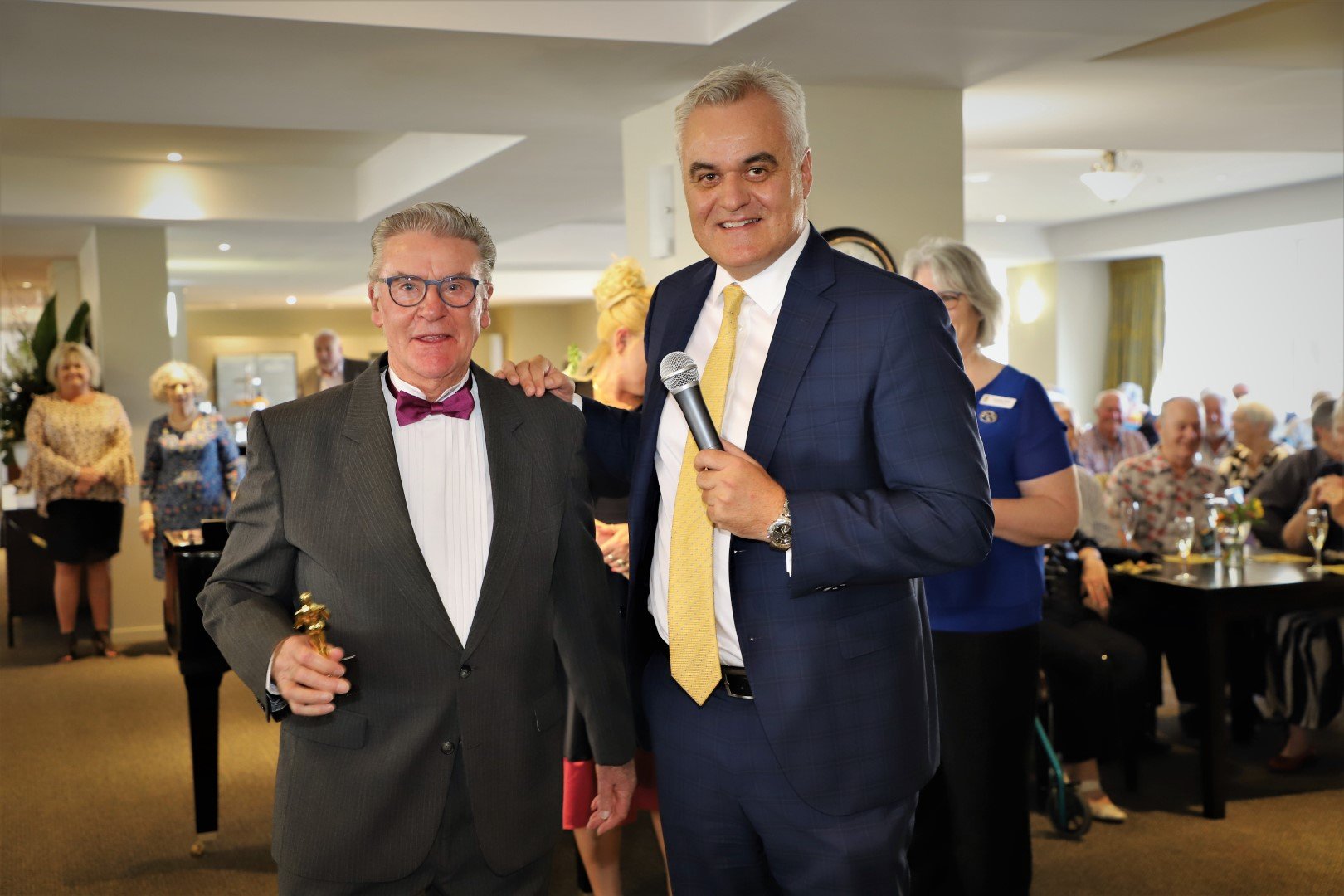 Movie star Norris Aitken gets a personal thank you from Gordy 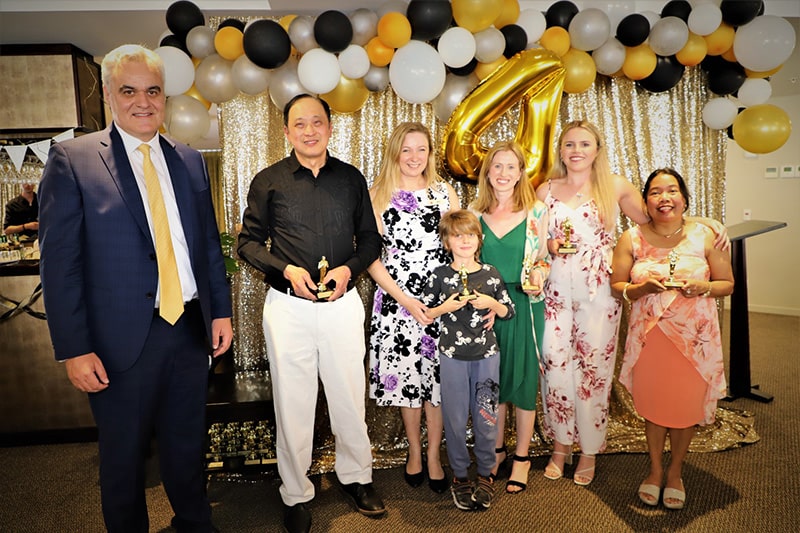 Priscilla Lowry, also the star of Ryman's Pioneers ad campaign, was keen for a photo with Gordy too! (below) 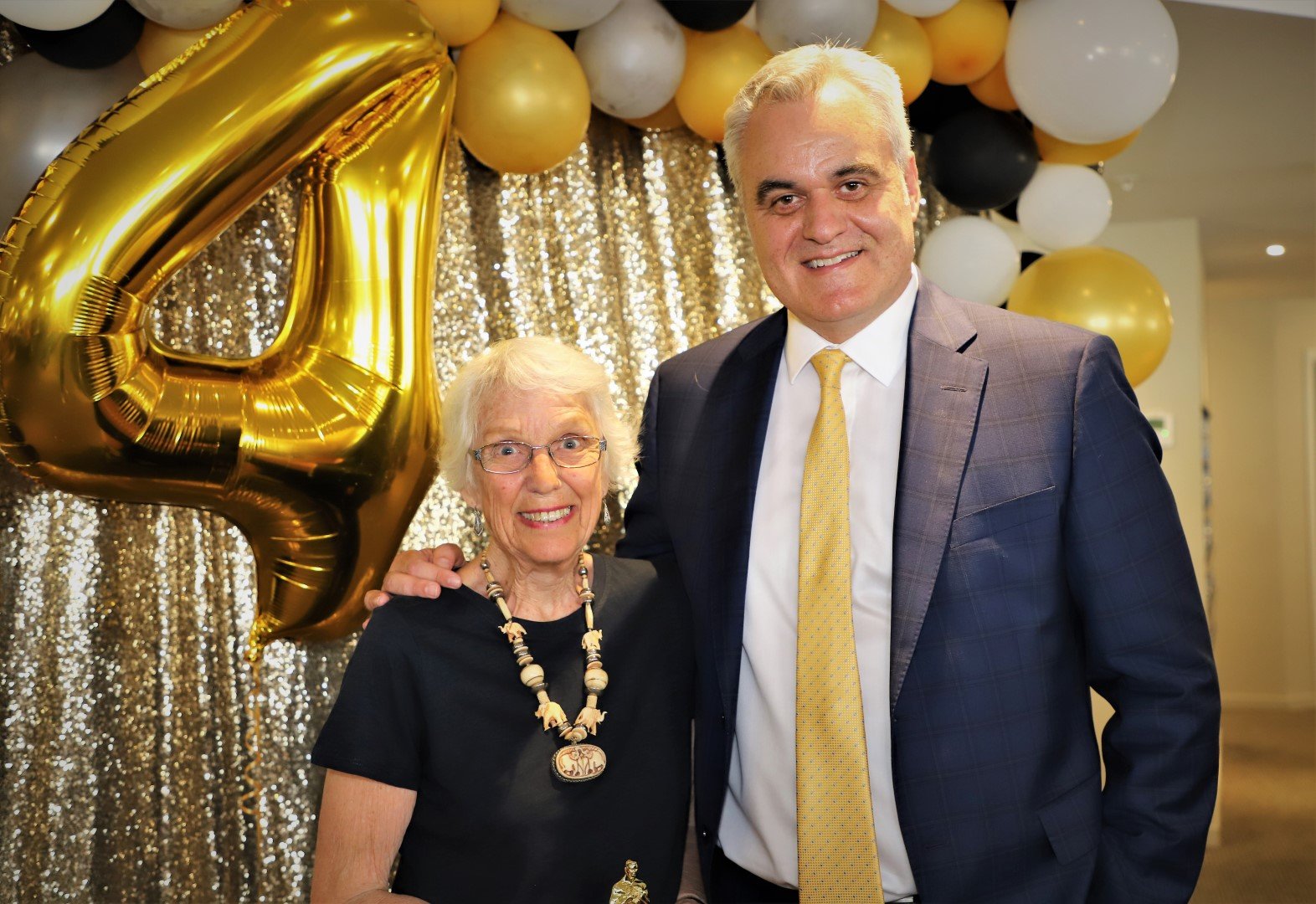 The video was finally released to the world after the second lockdown and has so far racked up over 14,000 views.
Gordy presented all the stars with a mini-Oscar award to say thank you and posed for photos with all the now familiar faces, including Norris, Maureen, Myrtle and Sybil and Priscilla, who also stars in Ryman's Pioneers ad.
Next, it was off down the drive to cut the ribbon and officially open the new craft room – officially to be known as The Studio.
“I know this has been a wee while in the making, but good things sometimes take time,” said Gordy.
“I now declare The Studio officially open!” 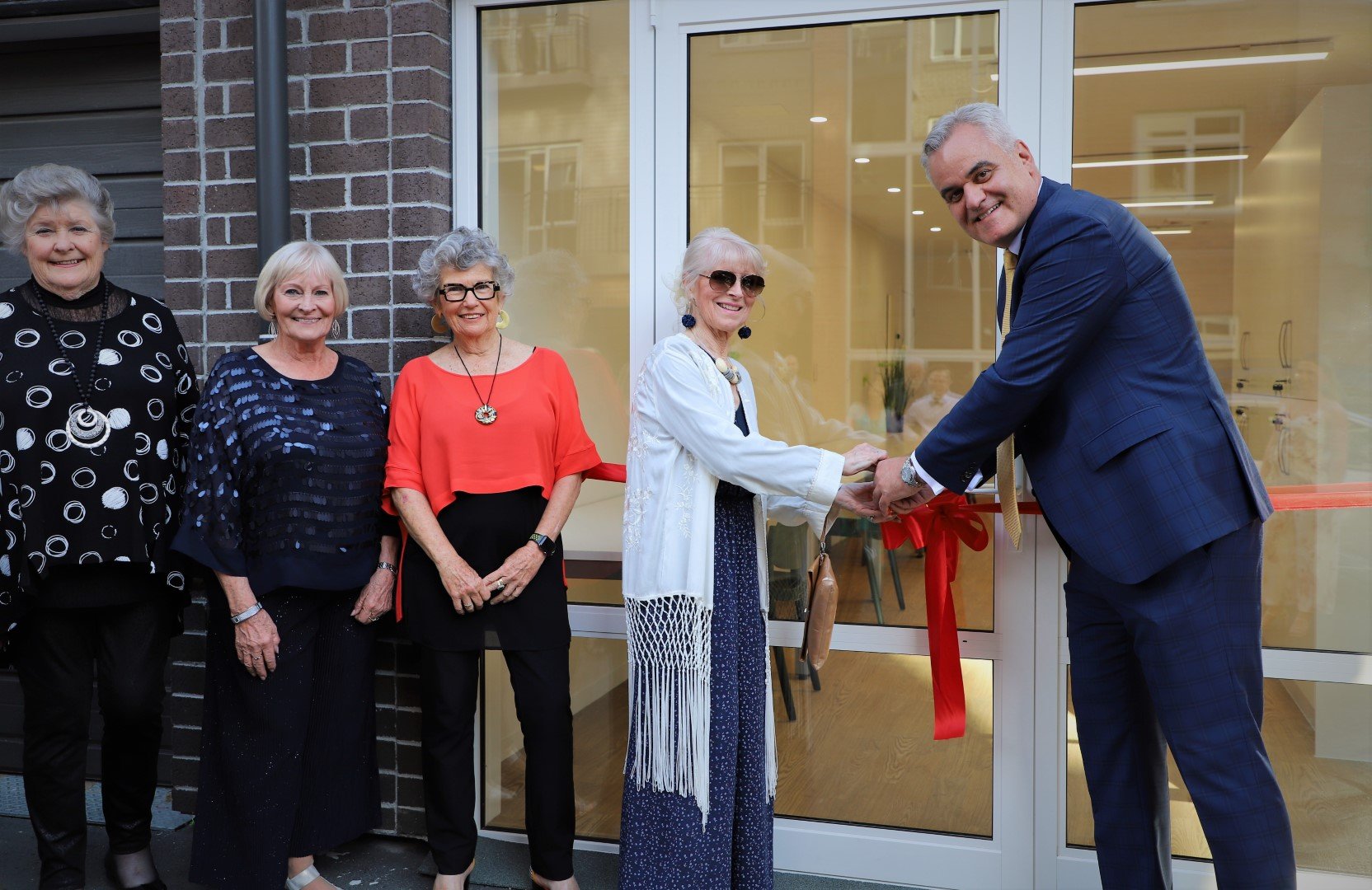 Jean Raw helps Gordy cut the ribbon to The Studio, the village's brand new craft space (above) and (below) Gordy asks if he is now qualified to use the room now that he has scissors! 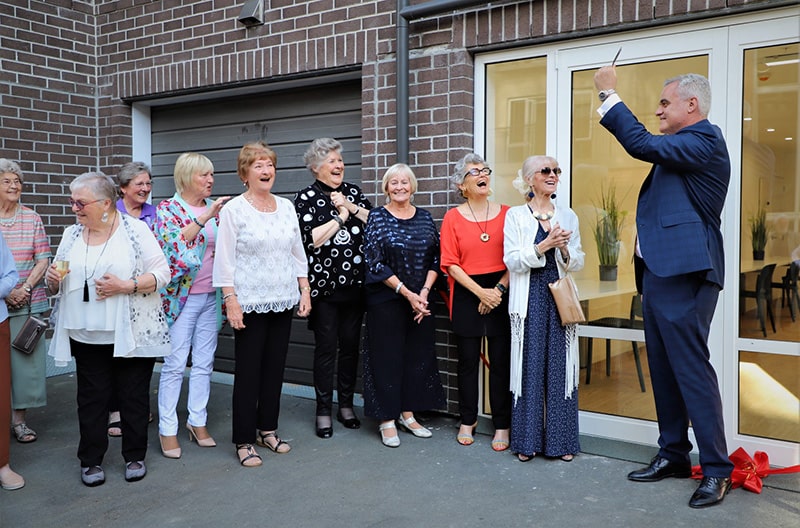