Bert’s biographer explains the legend behind the man

Residents and visitors alike were treated to an encyclopaedic telling of the Bert Sutcliffe story by his biographer Richard Boock at a special event held at the retirement village sharing his name.
Organised by Ryman Healthcare as one of many events celebrating its village namesakes as part of the Auckland Heritage Festival, the presentation saw Richard explain how he ended up writing The Last Everyday Hero: The Bert Sutcliffe Story and just how the master batsman earned his legendary status.
As part of a cricket-loving family from Dunedin, with older brother Stephen a former international cricket player, Richard became a sports journalist for the Otago Daily Times and later the NZ Herald and Sunday Star Times.

But it was the widow of author Rod Nye who convinced Richard to take on the job of writing Bert’s biography after her husband died before completing the mammoth task.
“He had done all the preparation, interviewed people like Walter Hadlee, Geoff Rabone, Johnny Beck for years, all these great cricketers from our past, and transcribed them too.
“It was like someone had come and sanded your whole house down and prepared it and you just had to put the top coat on!” said Richard, who was delighted to reunite with Bert's son Gary at the village.
Bert had enjoyed a ‘phenomenal’ inter-schools career based on the North Shore before heading to teachers college in Dunedin to study physical education where, after a brief stint serving in the military, he would play cricket for Otago.
His first outing for the province saw him score back to back centuries against MCC.
He went on to play all over the world and while his stats may not compare to today’s numbers, his playing helped to put New Zealand cricket on the world stage, Richard said.
“Bert and John R Reid, their scores were higher than any international players and the ’49 tour grabbed him a lot of notice. Bert was announced the inaugural NZ Sportsman of the Year.” 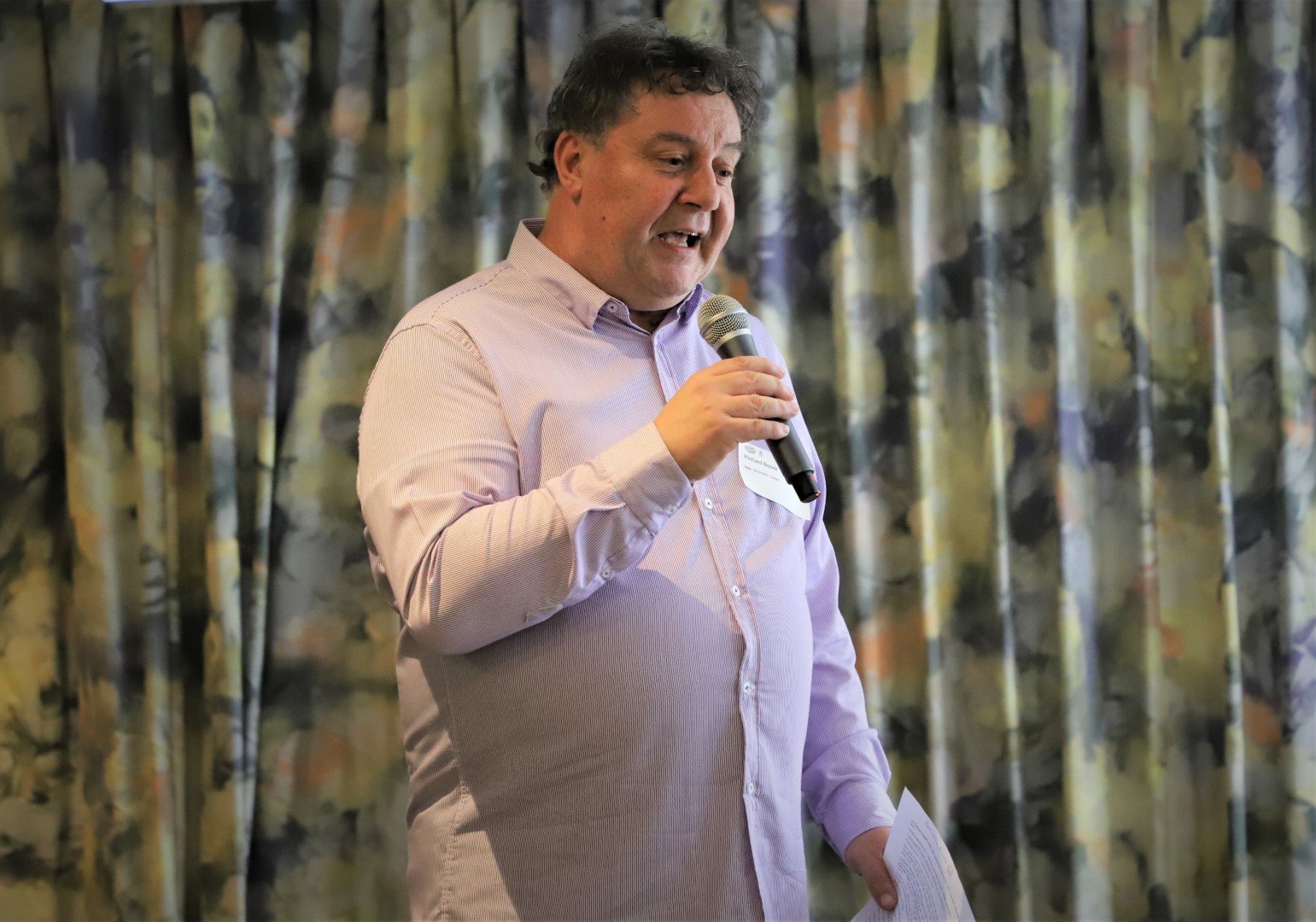 But it was his courageous partnership with Bob Blair against South Africa at Ellis Park in December 1953 that Bert is most remembered for.
The second test coincided with news that the Tangiwai bridge had collapsed on Christmas Eve, taking a train down and killing 151 people, including Blair’s fiancée.
“He was distraught, grieving at the hotel while the rest of the team went to the game and played with the flags at half mast.
“The NZ team were getting hammered. One player went to hospital after getting hit in the chest and Bert got hit on the fourth bowl, falling down unconscious.”
He left hospital heavily bandaged to return to the field scoring a whopping 80 in 59 minutes, falling on the ninth wicket.
As he reached the tunnel, Bob Blair appeared, and on taking his position on the field they said you could you hear a pin drop in the stadium.
“When he hit the six you could hardly hear yourself think!” said Richard.
“New Zealand lost the match and the series but there was so much respect all around the world with what happened with Bert and Bob and they remained the best of mates afterwards.”
He added: “That was the story I was told sitting at my father’s knee so to have Bert tell us at the cricket club as wide-eyed youths was probably one of the great honours I have had in cricket.
“He was a magnificent batsman but also a hugely courageous man and he could tell a good story too!”
The residents shared their own anecdotes about Bert and one visitor brought his copy of Richard’s book to be signed.

Putting fear on hold to get the job done sums up what it was like for Bert Sutcliffe resident Neill Boak flying Catalina...

From babies and kittens to elephants…

A Bert Sutcliffe knitter is adding giant-sized blankets for orphaned and rescued elephants to the long list of craft ite...