Professor Miia Kivipelto has won the 2020 Ryman Prize.
The award recognises Professor Kivipelto’s more than 20 years of research into the prevention, diagnosis and treatment of cognitive impairment, Alzheimer’s Disease and dementia.
Professor Kivipelto was awarded the prize by the Right Honourable Jacinda Ardern, Prime Minister of New Zealand, at a special ceremony at Ryman's Murray Halberg Retirement Village in Auckland, New Zealand today.
The Ryman Prize is an annual $250,000 international award for the best work carried out anywhere in the world that has enhanced quality of life for older people. It is the richest prize of its kind in the world.

The prize has been awarded six times and the prize winner is normally presented with the medal in person – but Professor Kivipelto joined via video link from her home in Sweden because of the COVID-19 pandemic. 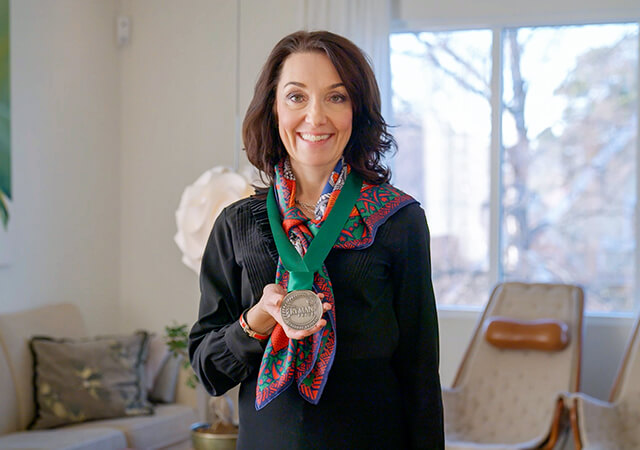 Professor Kivipelto was inspired to take on the research by the experience of caring for her grandmother who lived with Alzheimer’s Disease.
She was delighted to win.
“This is a great honour, not just for me, but for my team. I believe this will give us even more energy for what we do, which is more important than ever. We’ve kept going though COVID-19 and we’re getting great results, and we will keep going.’’
Professor Kivipelto is originally from Finland and is the principal investigator for the world-leading Finnish Geriatric Intervention Study to Prevent Cognitive Impairment and Disability.
Known as the FINGER study, it was the first large scale trial that showed multi-domain lifestyle-based interventions can reduce the risk of cognitive and functional decline among elderly persons who have increased risk for dementia. She is now leading the worldwide FINGERS network adapting and optimising the FINGER model in more than 30 countries.
In 2006 Professor Kivipelto and her team developed a tool that can identify dementia risk, which has been widely adopted and used as an educational and motivational tool and to target the interventions for those at risk clinically.
Professor Kivipelto believes a preventative approach targeting a whole lot of risk factors is the only way to tackle Alzheimer’s and dementia.
“The failure rate in Alzheimer’s Disease drugs under development is 99.6% and there have been no new drugs approved since 2002. There is no miracle cure. Our research focuses on identifying who is at risk and finding ways they can reduce these risk factors. It isn’t just one solution – but there are a whole lot of things we can do to reduce the risk.’’
The Prime Minister said that Professor Kivipelto’s work had directly contributed to improving the quality of life for older people.
“There can be no doubt her research will have a positive impact on many lives in the years to come,” she said. 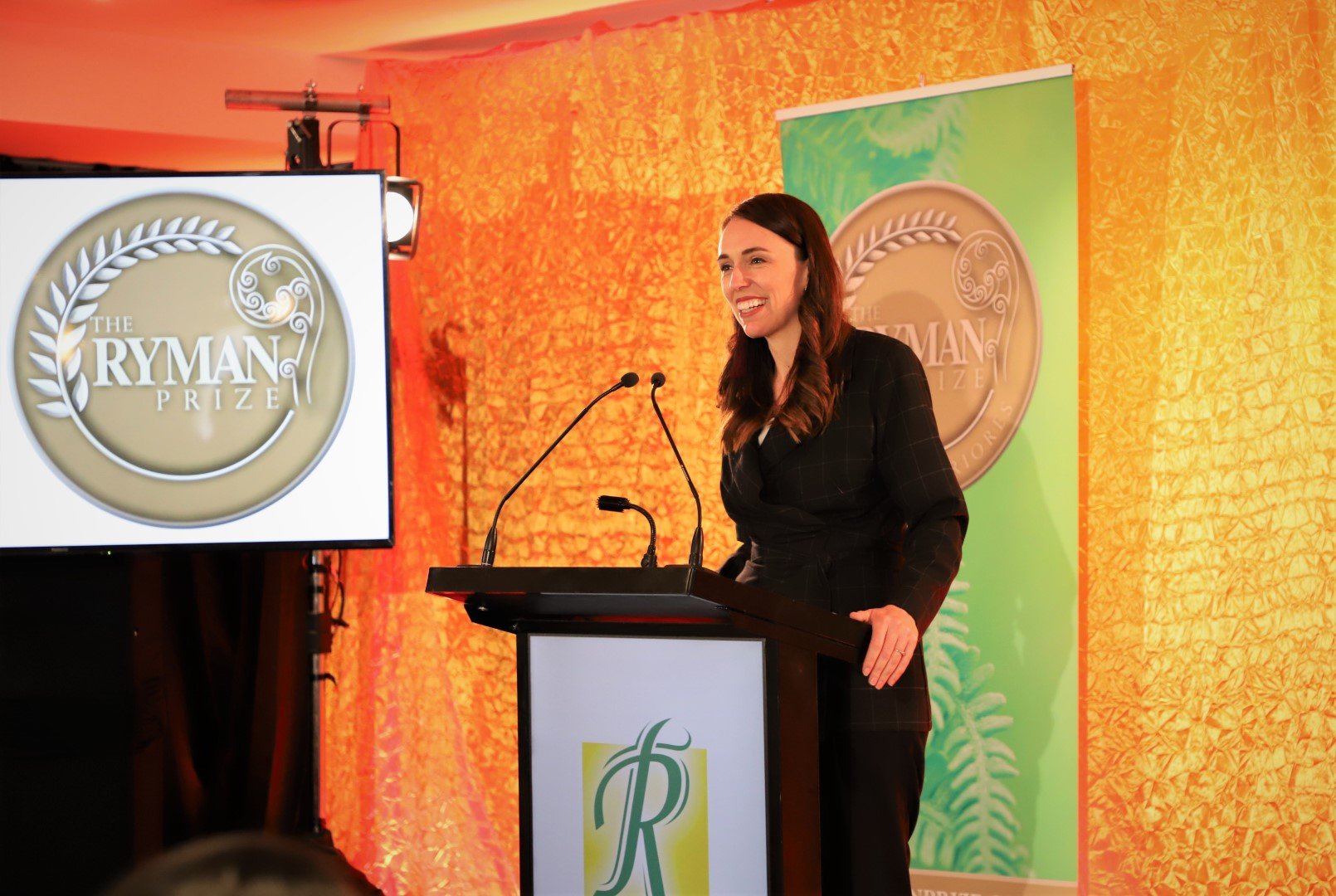 She also praised Ryman Healthcare for establishing the prize.
“It’s a fantastic boost to people who are working hard to improve older people’s wellbeing and will help them to further that work which will directly benefit the lives of everyone in Aotearoa New Zealand and worldwide.”
The 6,100-strong Ryman team received a special mention from the Prime Minister too.
“I want to thank all of the Ryman staff for the dedication and care towards older people and their whanau that you show every single day. You make a difference to thousands of people’s lives on a daily basis and you play a vital role in our health system and for that I want to say thank you.”
The Ryman Prize attracts a world class field of entrants each year. Each winner is chosen by an international jury of experts from across many disciplines.
Professor Kivipelto was singled out for this year’s prize for her tireless dedication to her research, and her far-reaching impact around the world.
“Our jury thought she was an outstanding candidate. Professor Kivipelto’s research is world leading, practical and influential. She leads a team of 100 researchers and clinical staff working on the challenge and her colleagues describe her as a very hard-working scientist who is absolutely dedicated to understanding disease and improving life for older people,’’ Ryman Prize Director David King said.
“She’s a great advocate for her field of research and there is no doubt she will use this recognition to her work. She’s an inspiration and this prize is a thank you for all the work she has done, and will no doubt continue to do.’’
Professor Miia Kivipelto is Professor in Clinical Geriatrics at Karolinska Institutet, Center for Alzheimer Research and Director of Research and Development, Theme Aging, Karolinska University Hospital in Stockholm, Sweden. Her Nordic-UK Brain Network is based also at the University of Eastern Finland, Finnish National Institute for Health and Welfare, Imperial College, London, UK and Fingers Brain Health Institute.
About the Ryman Prize:
The Ryman Prize is administered by the Ryman Foundation. The annual prize consists of a $250,000 grant which is awarded by an international jury to the best invention, idea, research concept or initiative that has enhanced quality of life for older people.
It is the world’s richest prize of its type and was established to create the equivalent of a Nobel Prize for people working in the field of the health of older people.
The prize was launched in 2015 and the inaugural prize was won by Gabi Hollows, the founding director of The Fred Hollows Foundation.
Gabi Hollows set up the charity with her late husband Professor Fred Hollows, and together they worked tirelessly to tackle the problem of preventable blindness in older people in the developing world.
The 2016 Ryman Prize was won by Professor Henry Brodaty. Professor Brodaty is a pioneer in diagnosis and treatment of Alzheimer’s and dementia.
The 2017 Ryman Prize was won by Professor Peter St George-Hyslop, a geneticist and researcher based at Cambridge and the University of Toronto. Peter has spent 30 years researching neuro-degenerative diseases, focusing on discovering the key genes and proteins that cause cells to degenerate.
Professor Takanori Shibata won the 2018 Ryman Prize for his tenacity in pursing new technology to help ease the burden of older people suffering from dementia.
The 2019 Ryman Prize was won by Canadian neurosurgeon Dr Michael Fehlings. Dr Fehlings won the prize for his pioneering work for older people suffering from Degenerative Cervical Myelopathy (DCM), a degenerative neck compression problem which is the most common form of injury to the spinal cord.
The Ryman Prize jury includes:
• Professor Brian Draper, Conjoint Professor in the School of Psychiatry at the University of New South Wales.
• Professor Sarah Harper CBE, Director and Clore Professor of Gerontology at the Oxford Institute of Population Ageing.
• Professor Tim Wilkinson, consulting geriatrician and Associate Dean of Medical Education, Otago School of Medicine.
• Dr Naoko Muramatsu, health and ageing research specialist, University of Illinois at Chicago.
• Professor Erwin Neher, Nobel Laureate and Director and Scientific Member at the Max Planck Institute for Biophysical Chemistry, University of Göttingen, Germany. Dr Neher is a biophysicist who won the Nobel Prize for Medicine in 1991.
• Dr David Kerr, Ryman Healthcare Chairman, Fellow and Past President of the New Zealand Medical Association, Fellow with Distinction of the Royal New Zealand College of General Practitioners.

The semifinalists for Ryman Healthcare Senior New Zealander of the Year Award - Te Mātāpuputu o te Tau for 2022 have bee...

Ryman Healthcare’s Pioneers campaign has taken top honours in the healthcare/beauty category of the TVNZ-NZ Marketing 20...