Back to Ryman news
Written by Maryvonne Gray
on August 01, 2022

Three sisters who all live at Bruce McLaren say moving into the Botany Retirement Village was the best way they could all be together again.
The sisters – Eileen Wing, 101, Lily Lay, 93 and Shirley Chan-Minnis, 86, are three of a total of nine siblings born to Tommy and Ng She Chan, Chinese immigrants from Canton who settled in the central north island.
Apart from oldest brother Wai, who didn’t join them in New Zealand until he was a married man in his 20s, the others all grew up in Raetihi, below Mt Ruapehu, helping out with the family’s greengrocer business.
“We were a very close family, all of us,” says Shirley, the unofficial spokesperson of the three and the baby of the family of six girls and three boys.

“When you’re the only Chinese family in a small community that’s what happens.”
Shirley says their father initially worked in his uncle’s shop and then started his own shop. He would have to ride seven miles on his pushbike to do the banking in Raetihi.
The garden of the farmhouse that they still own there to this day was turned into a farm to grow the produce, which was then sold in the shop.
“We were the workforce but we grew up doing it. We still had our fun and our pranks just like normal children,” she adds.
Shirley recalls that as they got older, the sisters would pitch in to help each other out.
“If one of the girls wanted a frock for a certain social event they would stay up all night and sew.”
As the children grew up and got married, one by one they left Raetihi and settled all around the north island.
“Once we got married and followed other interests you don’t go back so often,” says Shirley. 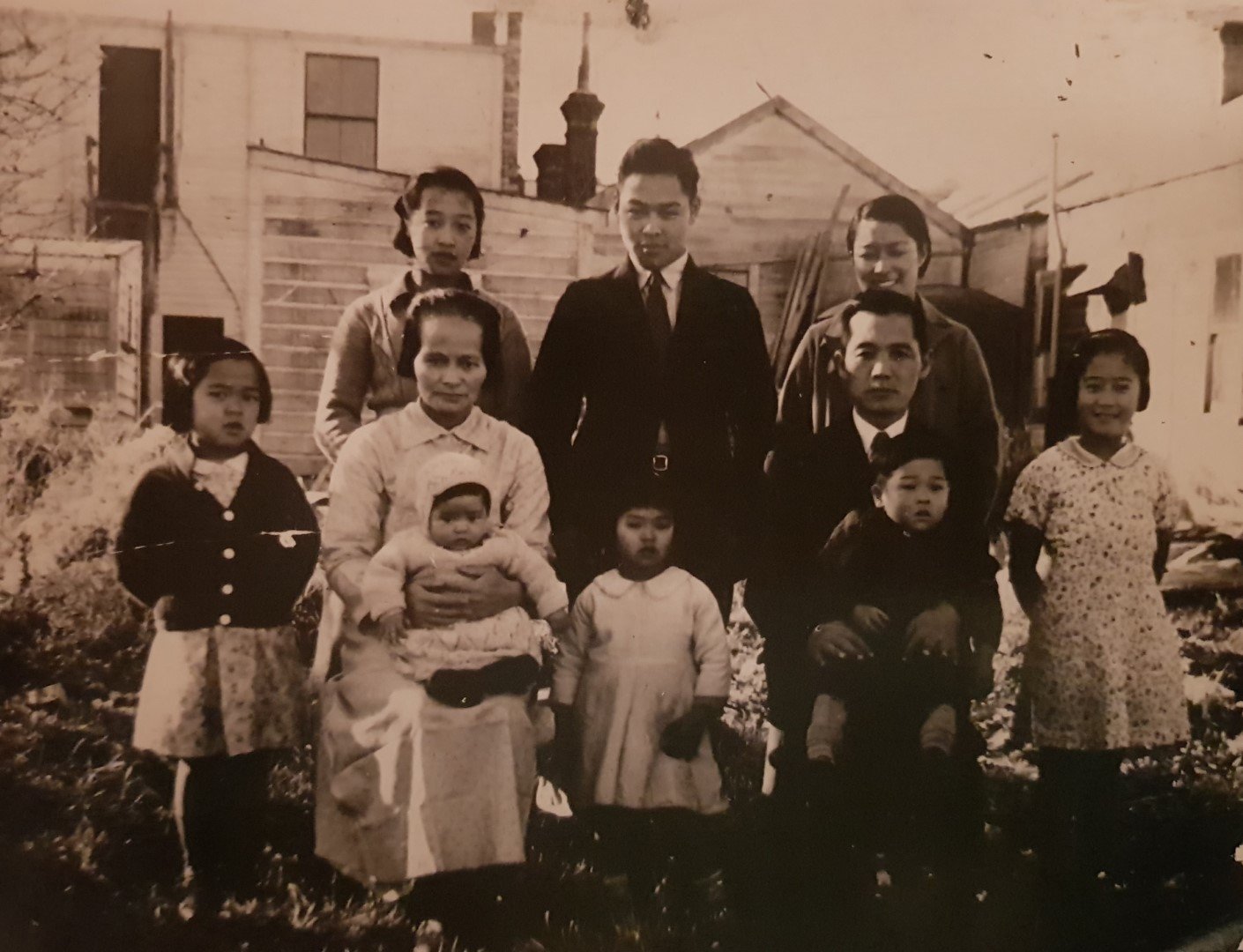 The family growing up in Raetihi. Lily is standing on the left, Shirley is the baby with the white bonnet and Eileen is standing at the back on the right.

Eileen and her husband Alan lived in Hastings and had a roadside fruit shop with an orchard attached where they raised their daughter Elizabeth, who now lives in Sydney with her family. Meanwhile Lily and her husband Bill owned a greengrocery in Pahiatua then later moved up to Hastings, while also raising their children Rod and Hilary.
Shirley moved to Ashurst near Palmerston North where she worked in two offices, one of them for a garage, and helped husband Ron raise his two sons.
Elizabeth says life was busy for her mum and Lily in Hawke’s Bay with little time for a social life.
“‘Hard work never hurts anyone’ was my mum’s favourite saying,” says Elizabeth. “I truly believe that her determination and good health has enabled her to have the quality of life she is getting.”
She says her Aunt Lily was always the great entertainer and talker of the family, with a very quick wit, and the two sisters would often discuss the happy times they shared living together at the back of the shop.
The sisters’ brother, Gordon, who is the second youngest sibling, lives in Newmarket near his son Clayton so, with Lily’s son Rod and his family also based in Auckland, it became the obvious choice as their new base. Gordon, Clayton and their families visit the sisters regularly.
“They’re very well looked after here. The family is pleased they’re here in a safe, secure environment,” says Rod, who said he and his sister feel much more at ease knowing their mum now has 24-hour care after a stroke in 2018 meant she was no longer able to live on her own.
Being together is the icing on the cake, he says.
“It’s a nice bookend to their life story, that they grew up as children together and were so close as a family, and now they can be together again as retirees.”
Lily moved into the village in July 2020, followed by Eileen in December that year and then Shirley joined them in April 2021.
Eileen, the only one who ever visited the family’s home in China, loves to read the newspaper while Lily, who both sisters agree was the smartest sibling of the lot, enjoys regular visits from her son and her grandchildren in Auckland who live close by, and when possible her Wellington-based daughter brings her two children.
Since they’ve all been together they’ve enjoyed a couple of birthdays in the village which makes a great venue for family gatherings.
Shirley, who lives in a serviced apartment, joins Eileen and Lily, who live in neighbouring rooms in the resthome part of the village every day, so that the three of them can dine and pass the time together.
“I live upstairs so I go down and have lunch with them and I stay until after tea,” says Shirley.
“We’re not people that want to socialise much and go out every day. We prefer to just sit and talk, or just doze! We’re quite happy because we’re all together.”
She says: “We have never lived a very exciting life, just a good life.”
“And a long one!” adds Rod.