Residents and guests at Ryman’s Ngaio Marsh village today sat back for a historical view of Canterbury and New Zealand rugby, and they enjoyed every minute.

Les, a member of the Board of Control of the Canterbury Rugby Football Union from 1981 to 1994, took the audience through a snapshot timeline of Lancaster Park from early events.

He said Lancaster Park, renamed Jade Stadium in 1998, and AMI Stadium in 2007, contained a treasure trove of memorabilia that he and others helped salvage before the earthquake-damaged stadium was pulled down. Items including photos of cricket games dating back to the 1920s and even earlier Canterbury Rugby pics were showed to the audience.

The South African Springbok tour of 1981 was a talking point for both Les and Gary, who at that point was well into a career as a policeman and who would serve more than 40 years in the force.

Les said approaching the first test, scheduled for Lancaster Park on Saturday August 15, 1981 the South African team had taken a low profile, staying on the West Coast. The night before the game they’d been unable to secure hotel rooms. Being of the Canterbury Rugby board as a liaison member for visiting teams he helped set up sleeping mattresses on the Linwood Rugby Club floors.

For the record the first test was won by the All Blacks 14-9.

Les told the audience Lancaster Park was used for many other sports, including of course cricket and league, events and even a public mass held by Pope John Paul II in 1986. Bands who played the park included Deep Purple in 1975 through to U2 in 1989 & 1993.

Gary Tibbotts, now a Canterbury Rugby Team Liaison Officer, said he was a policeman, standing between the playing sides and the Lancaster Park crowd, at the first test and that and the tour was a tough sometimes terrifying gig for the boys in blue.

The audience at Ngaio Marsh Retirement Village took up the opportunity to ask questions. Guest Shirley Forbes, the Mum of Northwood Retirement Village Sales Anthea Johnson, said she had been a peaceful protester during the ’81 tour and Gary congratulated her for doing that. “It split families. Mum was for the tour and Dad against it, and vice-versa.” 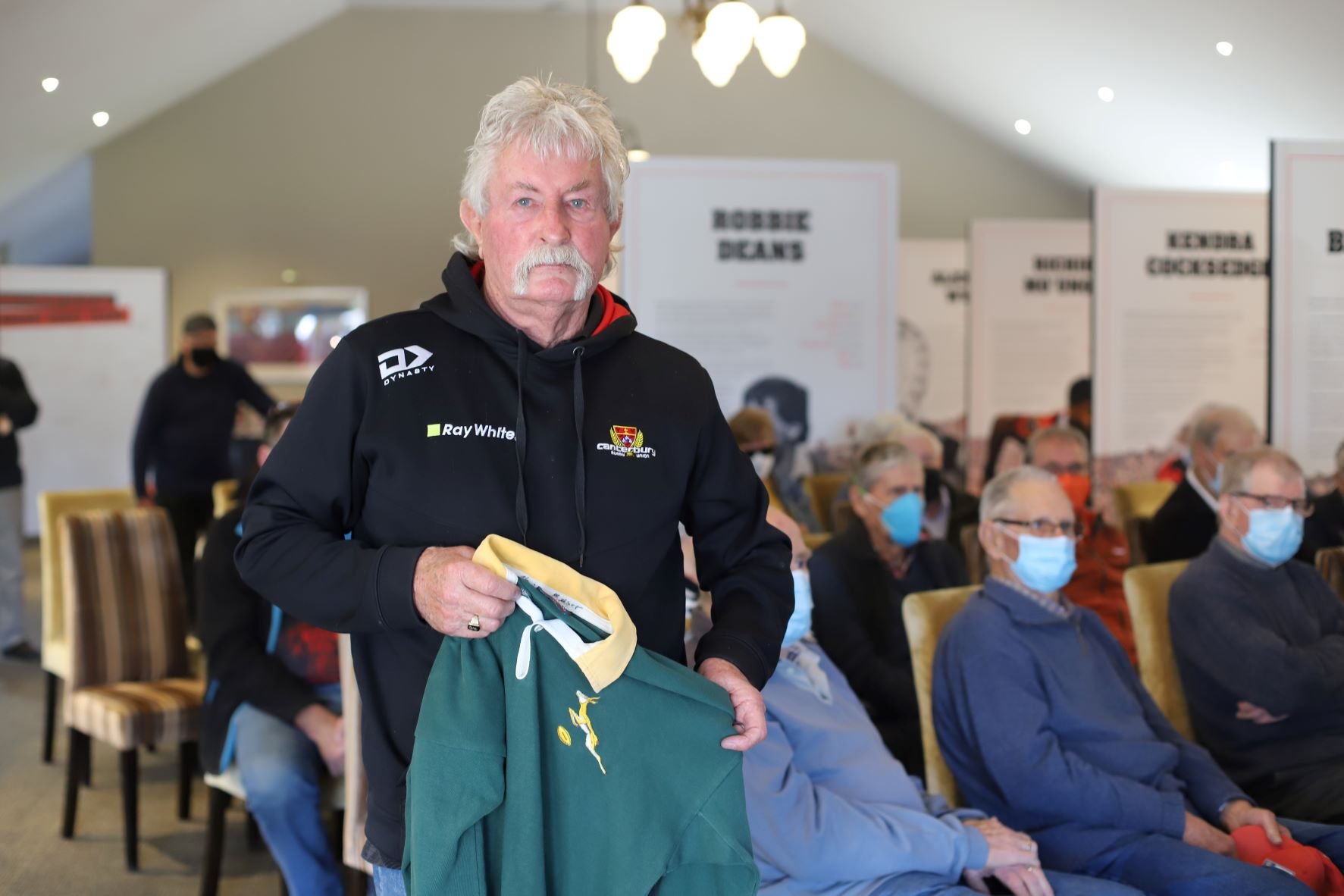 Gary also showed off a piece of memorabilia from the first test, having swapped his white police helmet for South African lock forward Hennie Bekker’s jersey in which he had scored a try.

The tour polarised opinions of Kiwis, even those in the same families. Many protested both the apartheid system in South Africa but also used the platform as vehicle for wider social action.

One visitor to Ngaio Marsh today was Stephanie Te Ohaere-Fox, who brought family members to the village to look at the presentation material.

Les made reference to other historic moments at the park. In 1962 Peter Snell, the 1960 Rome Olympics champion, broke the world 800m and 880 yards records at the ground. At one low point in the union’s finances, the turf was churned-up to grow potatoes.