Residents at Ryman Healthcare’s Bruce McLaren Retirement Village held a special Platinum Jubilee-themed Happy Hour yesterday to celebrate the Queen’s 70 years on the throne.
The village centre was decorated with union jack bunting and portraits of Her Majesty and a special cake was made to share around.
The ladies wore tiaras while the men showed off red, white and blue hats, bow ties and even a decorated face mask, like Ivan Davies (above), all while raising a toast to Queen Elizabeth’s remarkable milestone.

Village Manager Chantelle Hand even dressed up as the Queen, complete with red cloak and gold crown.
Many ex-pat Brits shared stories about their brushes with royalty, such as Hugh Martin, who comes from Newbury which is, fittingly, in the Royal County of Berkshire. 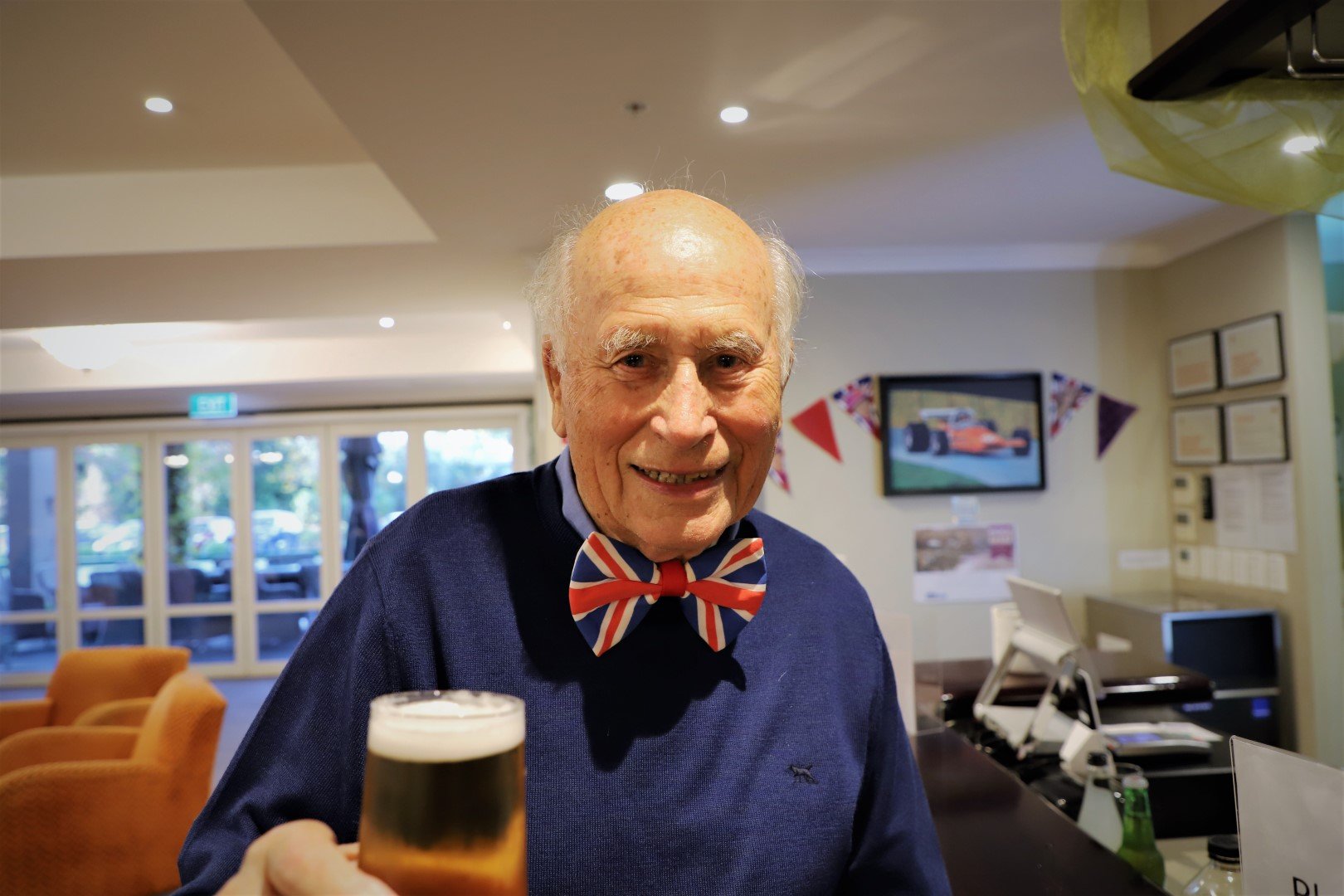 Hugh Martin raises a glass to Her Majesty.

Hugh worked as third engineer on the Trinity House yacht, Patricia, that escorted the royal yacht Britannia out of British territorial waters, so encounters with the Queen and Prince Philip were commonplace.
“We escorted the Queen on a number of occasions when she was leaving for state visits.
“I never actually spoke to her but she would give us a little wave and a nod.
“I think she had a soft spot for us at Trinity House.”
The Corporation of Trinity House of Deptford Strond was founded in 1514 by Henry VIII as a way of regulating shipping along the River Thames.
It later became the official authority for lighthouses, seaway marks and other navigational aids in England.
Hugh worked there for seven years and says being part of such an ancient institution and being in such close proximity to the royals was something he was very proud of.
“I’m very much a Royalist - for the simple reason that what’s the other option? It’s an institution that puts that barrier between you and having a dictator which we do not want.”
He has huge admiration for the Queen and admits it’s a sobering thought to think of life without her.
“She’s the only person in my entire life that’s still going, and I’m coming up for 90!”
He thinks the younger generations have lost some interest in the Royal family.
“I think that could change if William was in the job.” 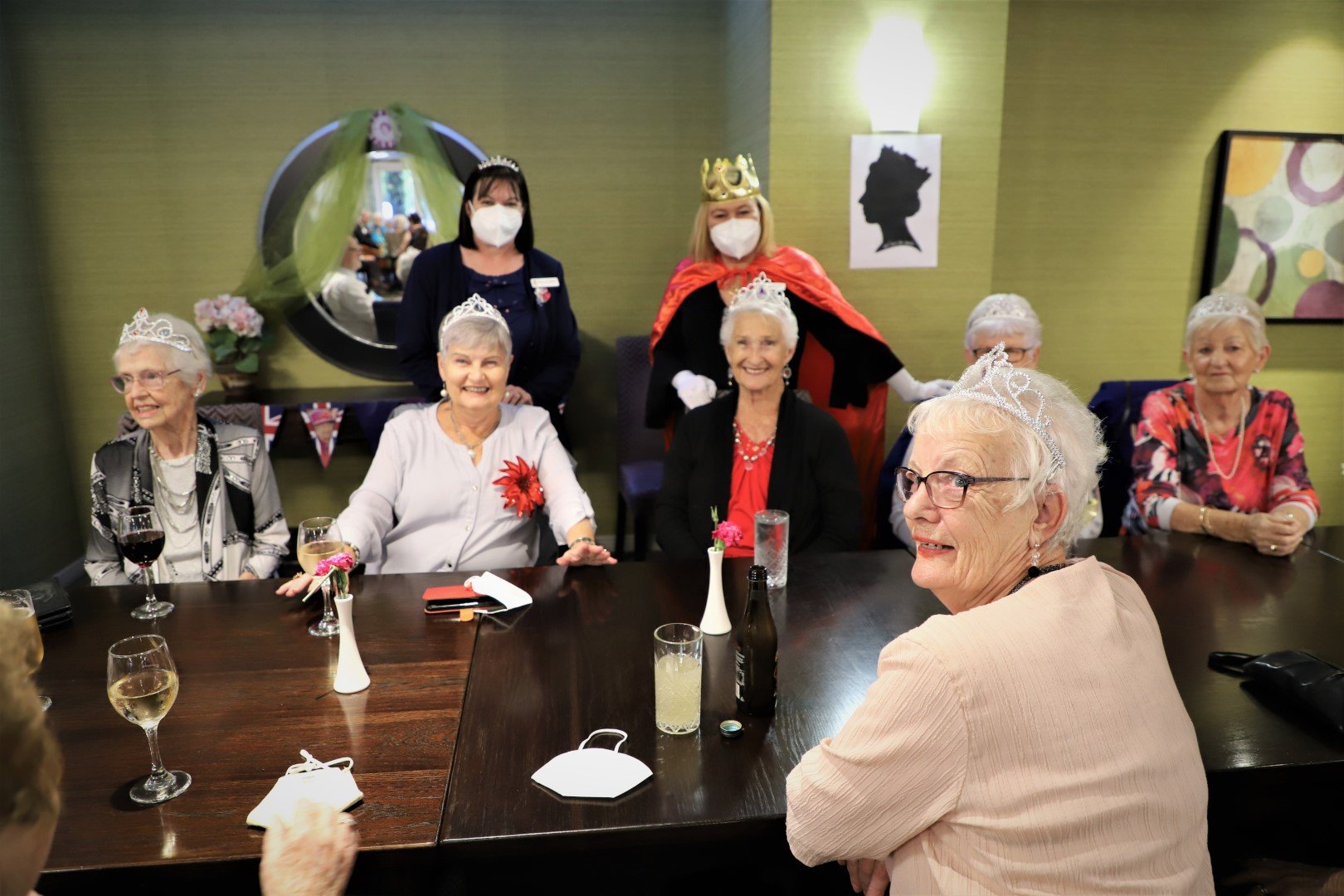 The tiara table: Queen of the Village Chantelle Hand meets her subjects, many of them ex-pat Brits such as Jane Clancy, Kay Webb and Sylvia Crittenden.

Other Brits in the village, Jane Clancy, Kay Webb and Sylvia Crittenden, were all in agreement about the Queen.
“I think she’s amazing, she’s fantastic!” said Sylvia.
Jane, who has lived in New Zealand for 40 years, is from Hertfordshire originally and said it was great to celebrate the incredible milestone in the village.
“It’s nice to see this, it reminds me of the ones we had at home when we were little and we had parties in the street,” she said. 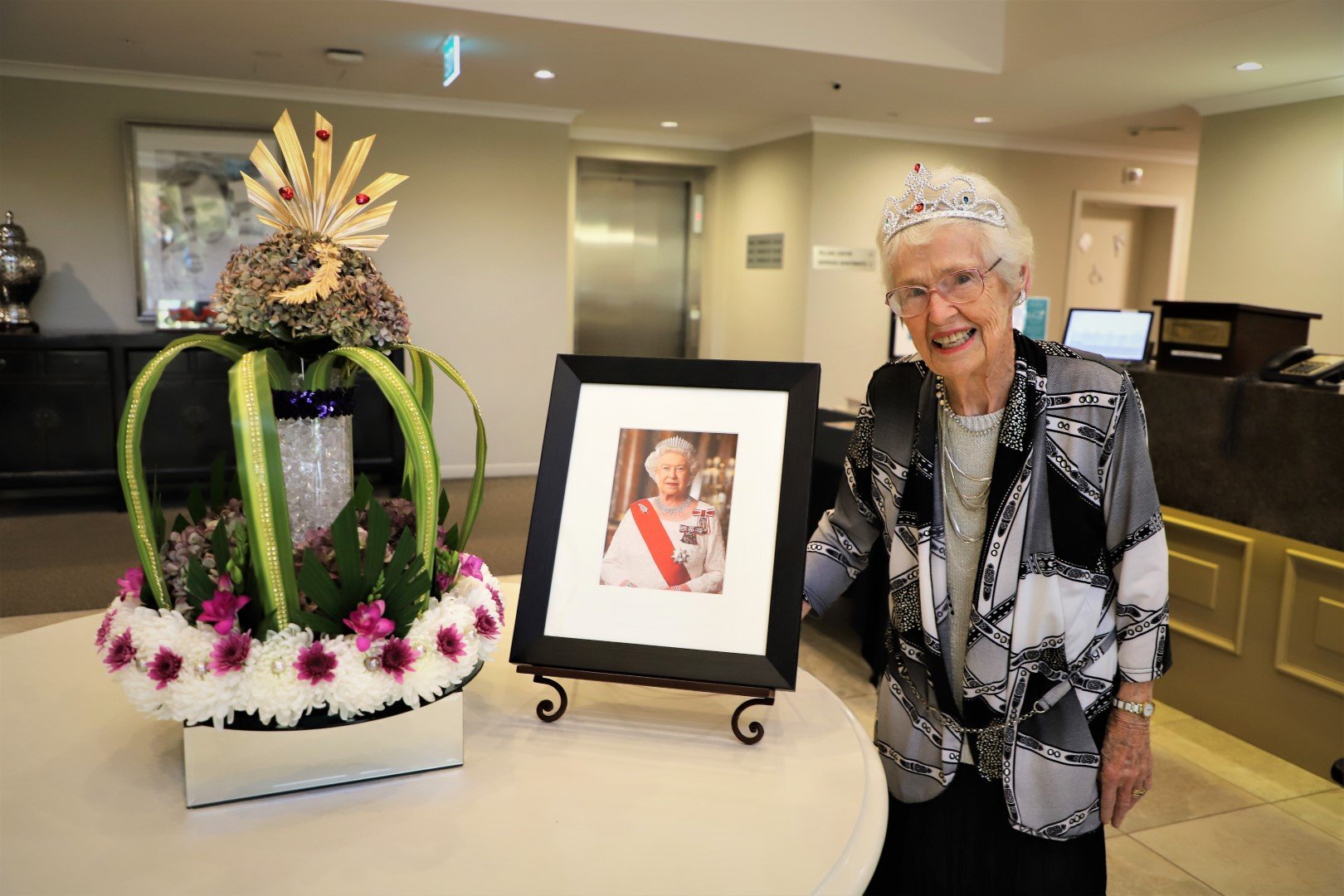 Fellow resident Betty Gate was happy to be photographed with the portrait of Queen Betty and even took out one of four best dressed prizes handed out that evening.
Heralding and playing out the evening was piper Lex Calder, who despite being a third generation Scot says he still has huge respect for the Queen.
“I’m not anti-Royalist!” he said.
“I played the bagpipes for the Queen when she came off the Royal Yacht at Mount Maunganui for the Royal Surf Lifesaving Carnival in 1963,” said Lex, who was 15 at the time.
The Platinum Jubilee celebrations at Bruce McLaren were being mirrored at Ryman villages up and down the country with many residents enjoying sharing their royalty-related stories or just soaking up a sense of the old country.