Back to Ryman news
Written by Maryvonne Gray
on March 23, 2021

Three soon to be next-door neighbours at Ryman's newest retirement village In Hobsonville are all connected by the common thread of serving in the Royal New Zealand Air Force - but their matching choices in retirement living occurred quite by chance.
Ian Curtis, Don Bennington and Darrell Simpson (pictured above) unknowingly bought three adjacent apartments on the top floor of the first block at Ryman Healthcare’s new village, and only caught onto the unfolding coincidence when Don bumped into Darrell at an information meeting.
Says Don: “My wife Janice and I decided to buy here because of my time spent based here at Hobsonville and we went to the same meeting as Darrell and Jill who had already purchased at that stage.”

The former airbase at Hobsonville was always viewed as the most coveted posting due to its stunning location.
“It was considered the best base in the air force,” says Don. “With the palm trees along the driveway from the entrance it was like having a bit of Fiji in Auckland.”
With all three currently living down the road in West Harbour, Darrell adds: “Each of us got used to living in the area so it seems fitting to retire here too.”
It was Don who sowed the seed for his old friend Ian’s decision to move in with the pair originally becoming friends through the Mess.
“Don got the book and I had a look and decided that’s not such a bad idea,” says Ian whose wife passed away three years ago.
“It’s important to look at your future health and welfare and I liked that Ryman has the hospital care and dementia care and the whole nine yards.
“I like the idea of the companionship too.”
Ian served the longest time in the air force out of the three, signing up as a boy entrant at 16 in 1958 and retiring after 34 years in 1992.
Originally from England, he arrived in New Zealand as a child migrant and first tried to join the force when he was 15, being so intent on the life it offered.
“The air force had what I needed – friendship - although I didn’t realise it at the time.”
He was stationed all around New Zealand including Whenuapai in 1986, Woodbourne, Ohakea and Wigram and also Singapore, working in the avionics service bays and on aircraft.
“I enjoyed it, I’d do it all again. To me it was a wonderful life,” Ian says.
Both Don and Darrell signed up for the force on the same day – January 13, 1965 – and while they had crossed paths over the years without realising it, they got to know each other at committee meetings for the No 5 Squadron Association for ex-members of the Whenuapai squadron. 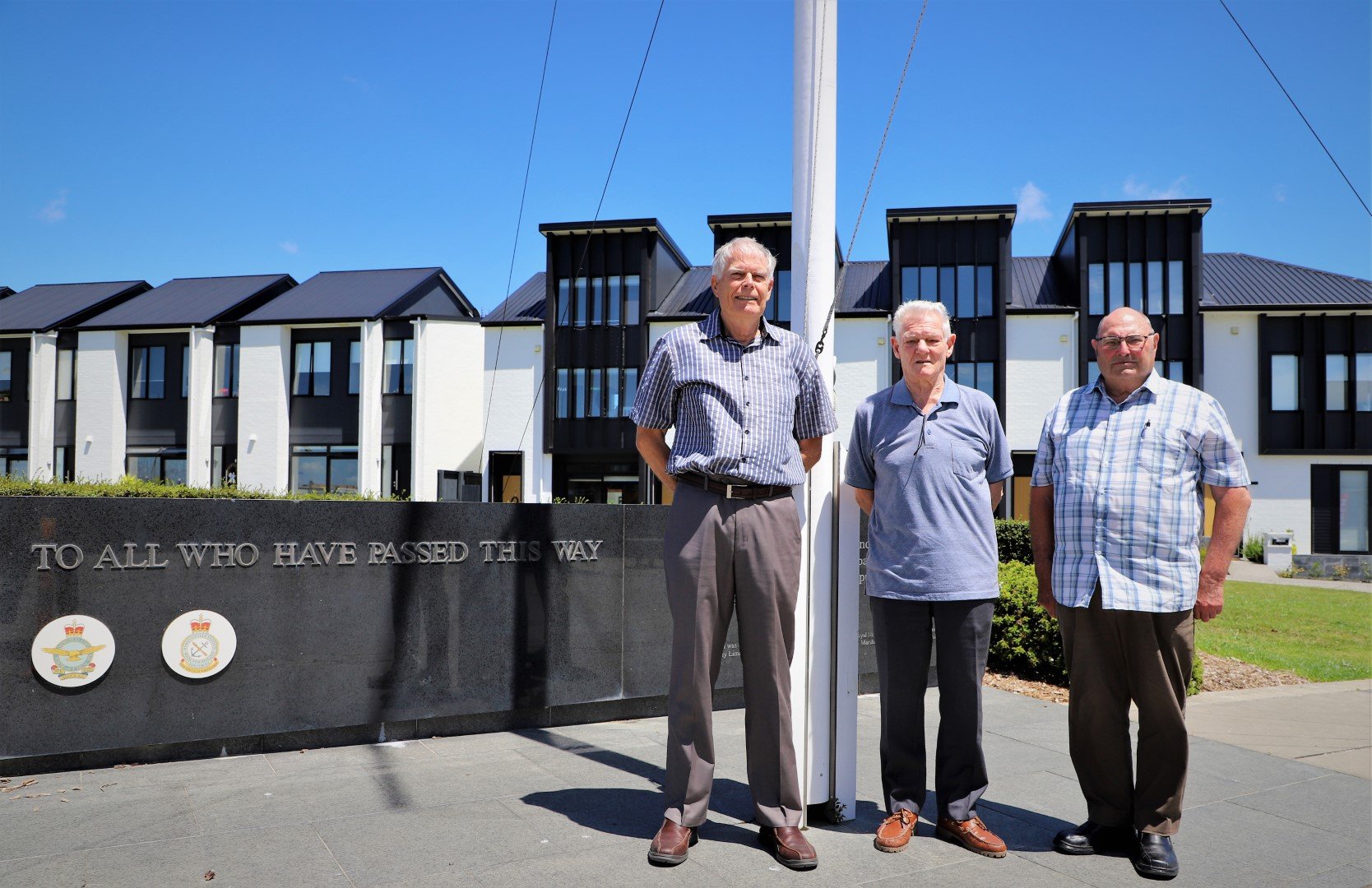 The men stand by the flagpole at the former NZRAF Headquarters on Buckley Avenue.

Don was an aircraft technician and helicopter mechanic with Vampire Jets, DC3s, Harvards, Devons, Bristol Freighters, Orions, Iroquois and Wasps all around the South Pacific and Asia.
He even survived a hair-raising May Day landing at Hobsonville after the Iroquois he was in stalled over the Harbour Bridge!
Darrell meanwhile fulfilled his childhood dream of becoming a pilot flying both planes and helicopters and later training upcoming pilots, something he still does part time for Auckland Rescue Helicopter using flight simulators.
During his time based at Whenuapai his tasks included flight patrols around New Zealand, escorting Skyhawks to Australia, and search and rescue for the Pacific.
He enjoyed an exchange posting with the US Navy in California training all the crew positions for the US Navy from 1979-81 and then returned as Commanding Officer of No 5 Squadron for three years.
Now, united in their delight at hearing the village is being named after RAF war hero Sir Keith Park, all three are looking forward to recreating the camaraderie they loved in the air force in their new home.
“We want to join in as much as we realistically can,” says Darrell enthusiastically.
“I’d like to convince these guys to come to 10 pin bowling with me,” says Ian.
“I won’t take much convincing!” Darrell laughs.

When Mark and Grace left for Malaysia in 2020, they had no idea only one of them would come back.

Jane Mander men’s shed team does its bit for charity

A group of handy residents from Jane Mander Retirement Village have rallied resources to help out their local branch of ...