Back to Ryman news
Written by Maryvonne Gray
on July 15, 2022

Nearly 3,500 ready-made frozen meals have been donated by Ryman Healthcare to the Auckland and Christchurch City Missions and Age Concern charities.
Now, hundreds of people experiencing food insecurity for a whole raft of reasons will benefit from the gesture in the coming days, say the charities’ leaders.
Age Concern Auckland said the approximately 500 meals gifted to them would be a welcome addition to give out to their clients who were doing it tough in these uncertain times.

CEO Kevin Lamb said: “The frozen food that Ryman has generously provided will make life easier for an older person who is struggling, or just not feeling great.
“Our army of volunteers who visit people experiencing isolation and loneliness will take them out to people so they will have a bit of respite from preparing food, or for some people it will be the difference in having one or two meals a day.”
Kevin, who is pictured with the Age Concern team above, said this time of year just added to the difficulties plus with the cost of living going up, so Ryman’s gesture could not be underestimated.
“Wintertime is the time our clients experience these colds and flu like symptoms and then there’s the extra fear and anxiety with COVID flying around so anything that gives that extra relief and something to look forward to is brilliant.
“To be able to give them a really nice, good quality meal, it’s a sign that people care, and a sense that they’re not alone and it gives a sense of priority. We’re very grateful.” 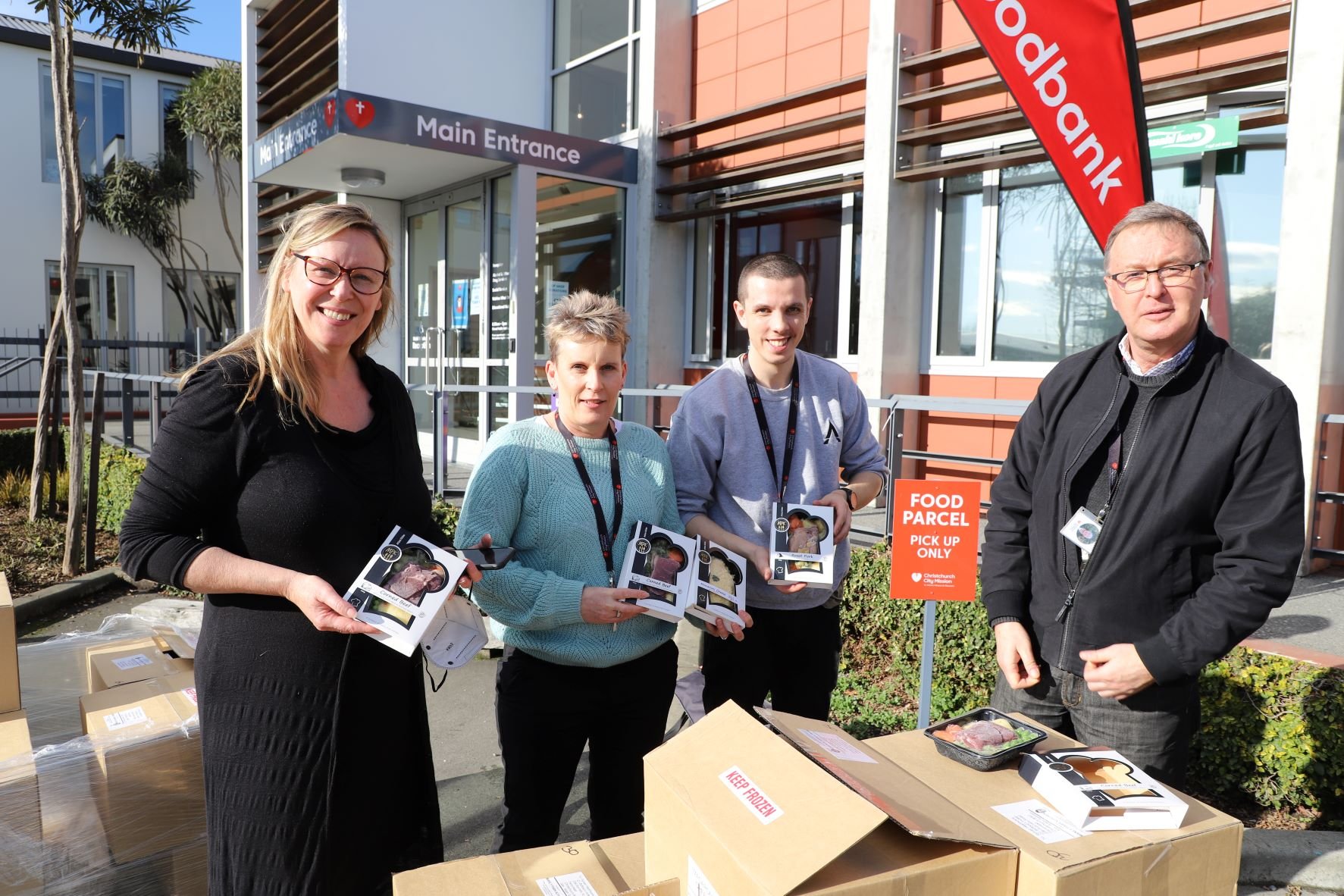 In Christchurch, the City Mission has a variety of clients including those caught in a hard place, those taking part in a drugs detoxification programme and those who simply cannot afford to feed their families in these times of high food prices.
Leanne Carter, Christchurch City Mission Foodbank Client Coordinator, said the frozen meals would be delivered in food parcels of differing sizes to cater to individuals through to larger families that need access to an emergency or fill in meal.
“We’ve set some aside for people who are elderly, who are sick. We have other agencies who will come in and say they have clients who are very ill and they can’t cook for themselves,” said Leanne.
“At the moment there are a lot of people who are sick with flus and colds and COVID.”
Families struggling with those with mental health or relationship issues are amongst the most vulnerable, she added, with around 60 food parcels a day being given out at present.
The meals vary from roast chicken, beef or pork dinners, lasagne, tagine – both with vegetarian options - or cottage pie, smoked fish and curried sausages, with all tastes catered for.
In Auckland, Ryman’s distributor Bidfood delivered 45 boxes to the Auckland City Mission – Te Tāpui Atawhai distribution centre in Grafton for storage in their on-site container-sized freezer.
From there they would be despatched to the Mission’s new HomeGround building in Hobson Street which opened earlier this year and offers housing, health and social services for people experiencing great need. 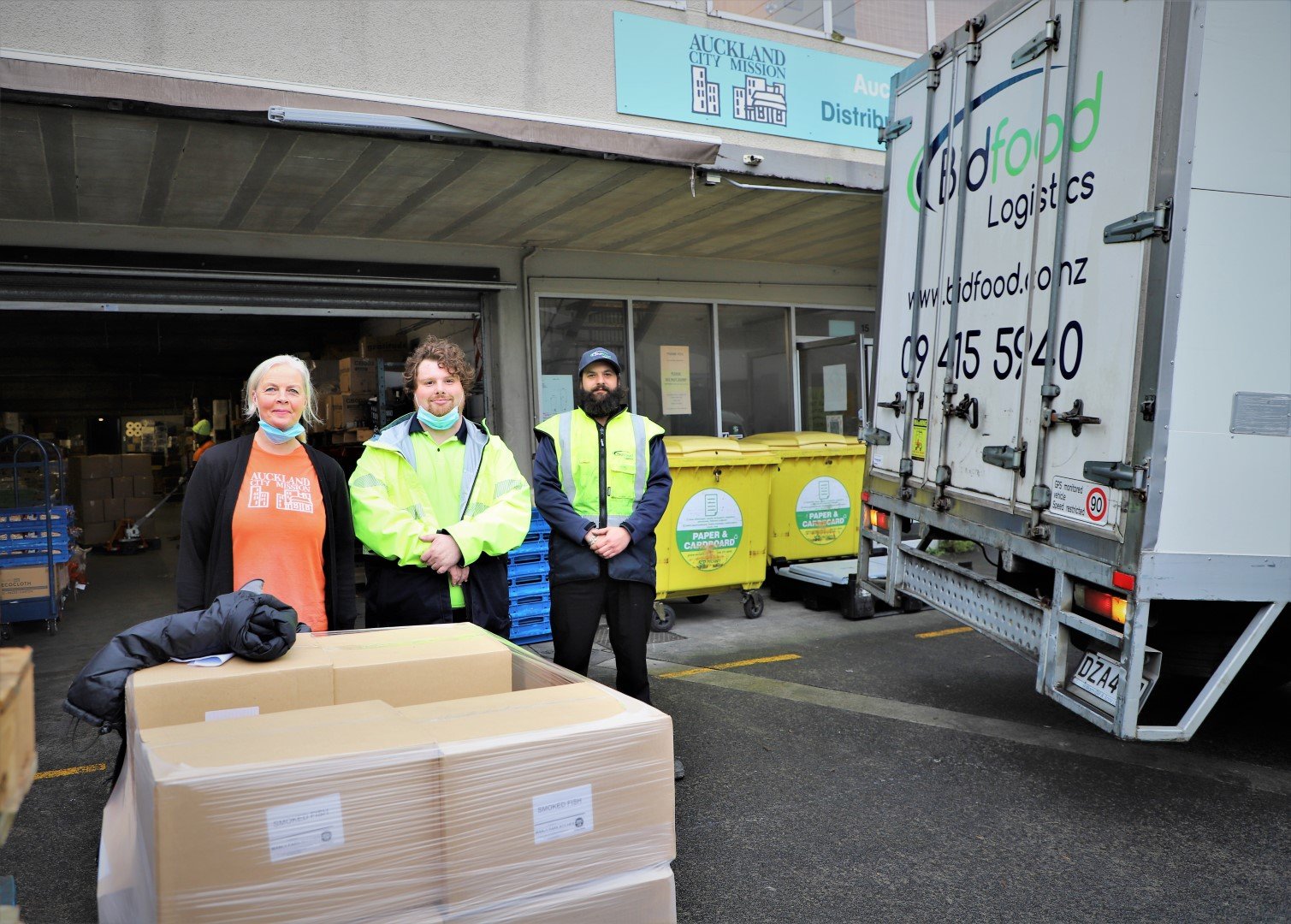 Currently, the City Mission team is giving out up to 300 meals every day from Haeata, the community dining room at HomeGround.
One in five Auckland families now struggle to put food on the table and Manutaki Helen Robinson, Auckland City Mission – Te Tāpui Atawhai CEO says the charity is grateful for the support of Ryman Healthcare.
“Helping people in Auckland who are facing the greatest need is a very real way to connect in with the city," she said.
“In 2021, the Auckland City Mission supported more people than ever before – in one particular week about 2,000 parcels of food were distributed, which is more than four times the weekly amount prior to COVID-19.
“Quite simply, we cannot do that without the generosity of our supporters.”
The frozen meals were made by specialty foods manufacturer Frozen Fresh and were ordered as part of Ryman Healthcare’s COVID-19 contingency plan.
With the meals approaching their best before date, the company decided to support the charities who could get them to people who needed them the most.
Ryman’s Chief Executive Richard Umbers said he was delighted to be able to help both the Auckland and Christchurch City Missions and Age Concern Auckland.
“They do a wonderful job and we’re sure the meals will be appreciated at such a tough time of year,” Richard said.

Transcribing documents may sound like a tedious task for some, but for one Miriam Corban resident, it has been a labour ...

Linda Jones has officially opened the Hamilton retirement village named in her honour. The pioneering Kiwi jockey and ca...