Gasps of delight and awe sounded out at Ryman Healthcare’s Devonport village today (Thursday 5 August) as a striking new portrait of village namesake William Sanders was unveiled.
Doing the unveiling was the artist Craig Primrose QSM and none other than the great niece of William Sanders – Glennys Adams – who is now a resident in the village herself.
“My grandmother Emily Keith, his sister, would have been so proud,” she said, after taking her first glimpse of the painting.

The portrait was revealed after Ryman Healthcare’s Chief Operating Officer Cheyne Chalmers explained how Ryman names its villages.
“Our cofounder Kevin Hickman had the idea. He thought a person would resonate more than a geographical location,” Cheyne said.
It was also Kevin Hickman’s idea to commission Craig to create an original painting of each village namesake.
So far, Bruce McLaren, Bert Sutcliffe, Edmund Hillary, Grace Joel, Evelyn Page and Murray Halberg villages now proudly display their namesake portraits in their reception areas, adding a real wow factor.
“Given we have 43 villages in New Zealand and Australia, and counting, we think that should keep Craig busy for most of the next decade!” Cheyne said.
The residents were thrilled to hear more about William Sanders’s story and how he came to be the nation’s most highly decorated naval hero from Royal New Zealand Navy historian and WW1 specialist Michael Wynd.

Michael Wynd (above) tells the story of William Sanders to enthralled residents, which include William's great-niece Glennys.

William was the only New Zealander to win a Victoria Cross in a naval battle, but sadly died after his ship was torpedoed by a German submarine in 1917.
Michael told how William Sanders grew up down the road in Takapuna before going to sea as a cabin boy at the age of 16 and rose through the ranks.
When World War I broke out he joined the Royal Navy Reserve and served on several ships before being given command of the HMS Prize.
The Prize was a Q ship – a decoy vessel that was used to lure German submarines into an attack.
Outwardly the Prize looked like a conventional merchant sailing ship, but it was fitted with concealed weapons.
Michael said they were essentially used as bait.
Once they were attacked a few members of the crew – known as a panic party – would abandon ship and paddle away in a life raft.
The remainder would wait for the U boat to get closer, and then attack.
“You can only imagine how dangerous that was – playing cat and mouse with a ship that was much bigger and more powerful than they were,” Michael said.
In April 1917 the Prize was sailing off the coast of Ireland when it was attacked by submarine U 93. 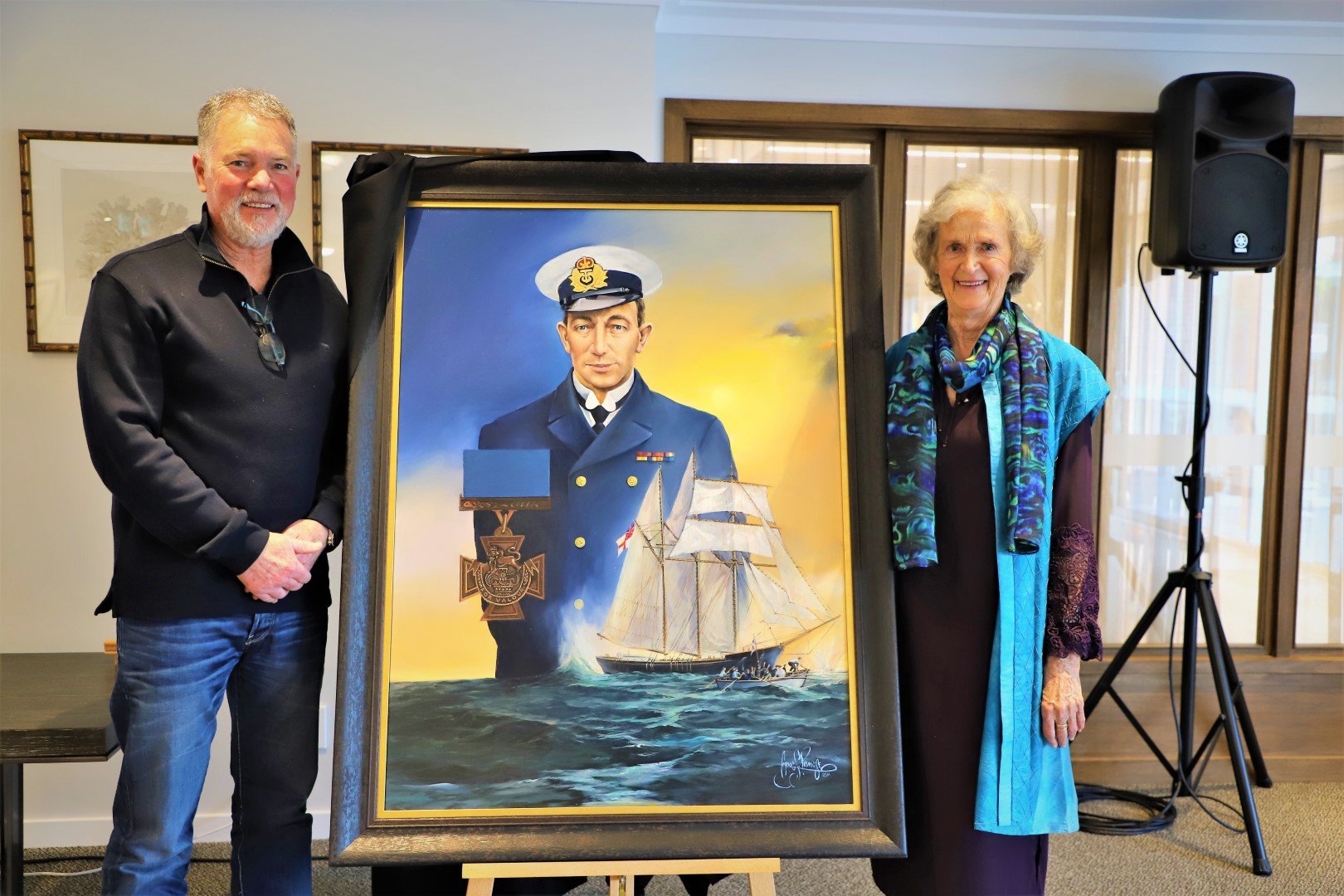 William and the crew kept their nerve while under intense shelling by the U boat for 25 minutes. As the submarine moved in for the kill, they struck back in a surprise attack, badly damaging the enemy.
Described as a man of iron nerves, William was awarded the Victoria Cross for his 'conspicuous gallantry, consummate coolness and skill in command' while in action.
Just four months later, in August 1917, William was killed when the Prize was attacked by another submarine. He was 34 years old when he died and had never married.
He was awarded a posthumous DSO for his bravery in another attack in June 1917.
“William Sanders remains the most highly decorated naval officer in our history,” Michael Wynd said.
“He was a man of great courage, he was a man of great leadership and it is an appropriate name for this village.”