For Pete and Marg Walker, the seed of an idea to move into a Ryman retirement village was first sown more than 10 years ago.
The Remuera couple had invested in Ryman shares and attended a shareholders meeting at Edmund Hillary where they enjoyed a tour of the village afterwards.
“We were very impressed,” says Pete, a former financial officer and chief executive for a photography company. “Then when we realised the old hotel on Campbell Road was being demolished and Ryman was building a village we tucked that away in the back of our minds.”

Both Pete and Marg had been to the hotel in its heyday attending accountancy and nursing balls, and felt a connection with the area.
On visiting the newly built Logan Campbell Retirement Village on the first open day it cemented the idea and after attending a couple of events held at the village the seed had grown into a sapling.
“We met some residents over a cup of tea who invited us to look at their apartments. They kept saying, ‘we like you, come and live here!’” laughs Marg.
They talked things through with their two daughters, who were relieved their parents were future-proofing, and checked things out with their lawyer, who also gave the thumbs up, and the couple decided that 2020 would be the year to make the big move.
They came and viewed an apartment on Anniversary Day and paid the deposit just two days later. The move happened in May, as soon as the lockdown restrictions were lifted.
“It’s a beautiful corner apartment with a double aspect – so we look out towards Ellerslie Racecourse and Motutapu Island in one direction and Cornwall Park in the other,” says Marg.
With their last home being in an apartment block, the couple found the transition very easy as they were used to community living, but settling in was a dream come true, thanks to their wonderful new neighbours.
“The neighbours and general friendliness just blew us away. There were knocks on the door with cakes and scones and our lovely neighbour opposite even offered to help set up the kitchen – which she then did!
“We just can’t believe how happy and friendly our fellow residents are,” says Marg.
They wasted no time in joining into the various activities and are now dedicated members of the village singing and chorus group, the Loganberries.
“Pete has found his voice again,” says Marg, adding: “We’ve always been contributors to our surroundings and we just feel as if we have fitted right in.” 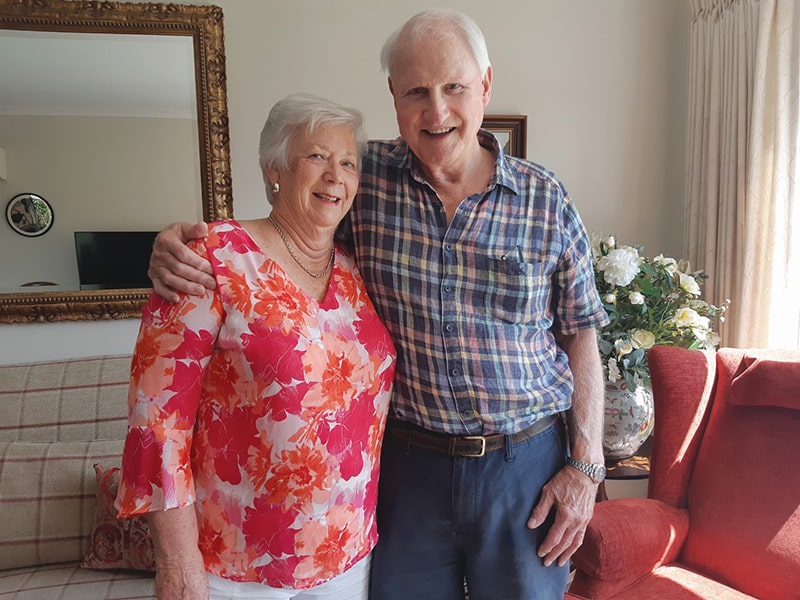 The camaraderie continued when Auckland went into a second lockdown, a measure that Marg, a retired operating theatre nurse, appreciated.
“I understand that whole process of infection control, and even though we missed going to our holiday house at Piha during that time we didn’t want to put stress on our family if we got into trouble and needed rescuing!”
A touching moment occurred when the lady who previously lived in the apartment, but had moved into the care centre, came to visit.
“Would you believe we were both born in Waiuku and went to school in Pukekohe,” says Marg recalling her upbringing on a farm in Aka Aka.
“There’s 15 years between us but we started talking names and realised it’s such a small world!”
Now, as their first anniversary of living at Logan Campbell looms, the couple feel confident and secure in their future.
“We love our routine here, participating in Triple A twice a week, spending time in the library, and playing the odd game of 500 and our singing sessions of course,” says Marg.
“Our kids laugh as we’re so hard to pin down these days. Our daughter was coming over from Waiheke and wanted to meet us for lunch but I said we had exercises at 11am, singing at 11.45am and then the dentist at 2pm, and it was a similar story the next day as well!
“There’s no time to be bored!”