At 90-years-old, former Olympian Allan Tong has only just retired from coaching rowing after first taking up the sport as a 16-year-old.
“I just retired this year! It was getting to be a struggle getting in and out of the boat. It’s part of old age I suppose!” says the Evelyn Page Retirement Village resident, who is now turning his focus on supporting his fellow residents in Ryman’s own upcoming Olympics.
Ryman Healthcare is bringing together 12,500 residents across 41 villages in New Zealand and Australia to compete in the world’s first international retirement village Olympic Games.
Allan fully endorses remaining physically active and credits his passion for rowing for keeping him fit and healthy all these years.

Incredibly, the former Whanganui Technical College student only got into rowing on a whim.
“My school put the word out that they were putting together a team and I went along.
“They said ‘you’re a bit small but if there’s a seat in the training barge we’ll take you but otherwise you’ll be cox’. Luckily there was a seat!” he laughs.
“My first year of rowing was the first year of the Maadi Cup, in 1947.
While his school lost out to Mt Albert Grammar School at the inaugural regatta, Allan went on to join the Union Boat Club and continue with his new passion for rowing.
“I rowed for four years before I started winning a race or two.”
However, just as he started to achieve some success, disaster struck.
After completing his Cadet Military Training (CMT) aged 20, Allan contracted rheumatic fever and didn’t row for a whole year.
“I was told by the doctors that I would never row again. But at that stage that was all I wanted to do and I found a specialist who gave me the go-ahead.”
In his 20s, Allan’s rowing talents really came to the fore. He took part in the 1950-51 Centennial Games in Christchurch, winning the Youths 4 and 8, followed by the National Championships in 1951 where he came second in a couple of races, and this pattern continued over the next few years. 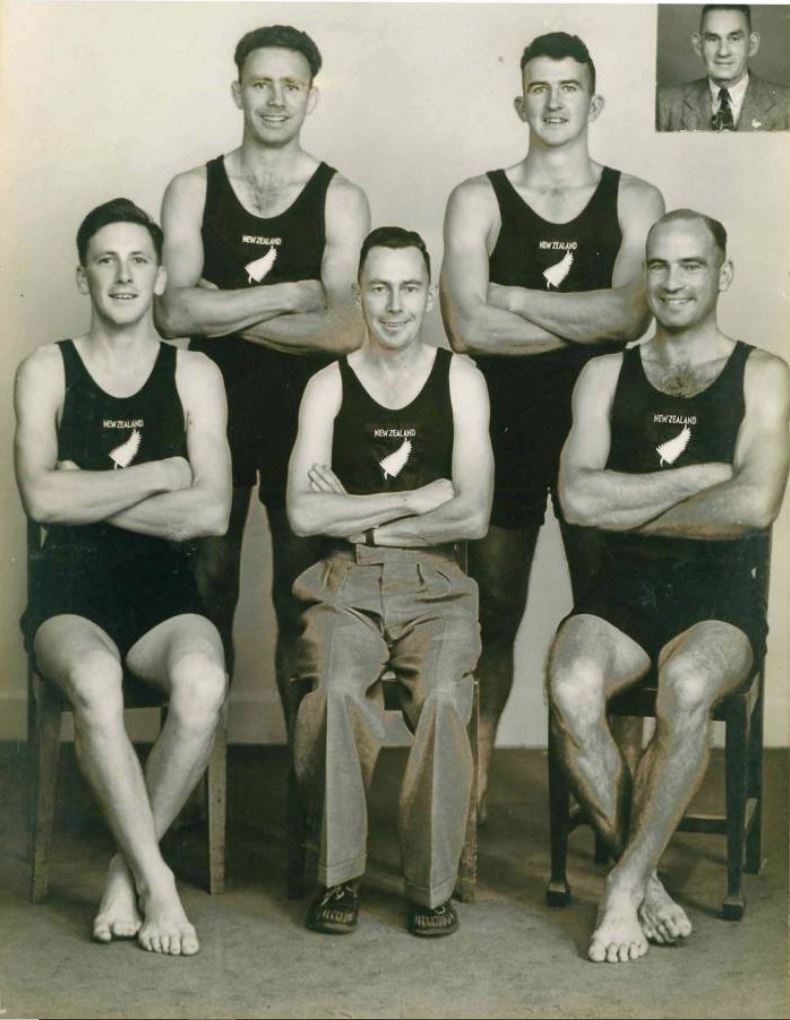 After marrying Jean in 1955 he went to Picton to trial for the upcoming Olympics.
“We raced against the NZ coxed 4s champions and won by four lengths. Then we raced the composite crews and won decidedly.”
When 25-year-old Allan was announced as a member of the NZ Olympic coxed four rowing team, and the 123rd person to represent New Zealand at the Olympics, Jean was heavily pregnant with their first baby.
“I couldn’t have done any of it without Jean’s support, she’s been the lynchpin. And later the kids.”
Life was also decidedly busy with helping his father in his painting and contracting business, often going back to work in the evenings after afternoon trainings which would end with their coach guiding them in with a torch in the winter darkness.
“It was truly amateur. We never went to any regattas as there were none to go to and we never went overseas. We did three or four days training at Karapiro, wearing bush singlets with silver ferns sewn on, and that was the only training out of Wanganui that we did!”
Their son Peter was born two weeks before the team left for the 1956 Melbourne Olympic Games.
In those days, resources were nothing like they are today. The team’s coach Clarrie Healey funded his own trip while team manager Bill Stevenson, a businessman and former first class rower himself, leased a bus to transport them out to the rowing venue in Ballarat, which was 70 miles from the Olympic village. 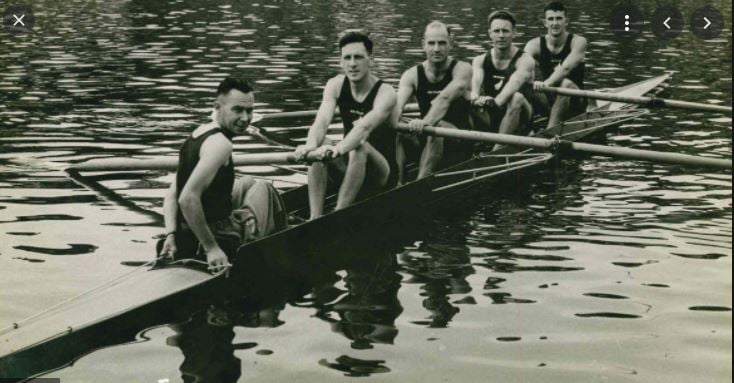 Front rower in the coxed four.

Stevenson also organised for a boat to be shipped out from the UK otherwise they would have had no boat, says Allan.
“We lost the heat and then won the rep charge but we got beaten in the semi-final, we were the also-rans!” laughs Allan.
His rowing career was far from over however.
He continued to row competitively until 1960 winning two redcoats in the 8’s then turned to coaching students from his old school, renamed Whanganui Boys’ College.
Later he managed U23 squads touring to Australia and worked as a liaison officer of the sport to the west German team.
He also passed on his love of rowing to his three sons, Peter, Bruce and Ross with Ross winning a bronze medal at the 1984 Los Angeles Olympics, rowing in the same crew and seat as Allan, stroking the four.

Peter coached at Wellington College and his children Matthew, Rebecca and Michael represented their schools and Bruce, with Allan’s help, set up the rowing team at Wentworth College, where he is also principal. Bruce is also chair of the NZ Secondary School Rowing Association and a member of the NZ Rowing Council.
And daughter Andrea even got roped in to cox at weekends when they were short!
“In rowing, it’s like a disease once you’re involved – you can’t let it go!
“It’s also like a family – everyone knows everyone in rowing,” says Allan.
When Allan compares the early days of rowing with the incredible resources and facilities available to rowers now, he is philosophical.
“I don’t regret that.
“Each Olympic Games I have seen a stepping stone and each year it gets higher and becomes more organised and professional. You see the set up at Karapiro now and it’s just magic.”
While he says the biggest challenge facing the NZ competition is keeping rowers in the sport, he says the basics remain the same.
“I believe anyone that wants to do any sport has got to have the passion, will, determination and enjoyment to train.
“If they don’t like their training, they’re never going to achieve.”