With a peak rate of 15 people being vaccinated every 10 minutes, it was no surprise that residents attending a Covid vaccination clinic at Edmund Hillary Retirement Village were singing the praises of the team.
“They’ve done an amazing job of organising it, but they always do a great job here at the village,” said Lyvernne Ambridge, an independent resident of two years.
Lyvernne was one of hundreds of independent residents receiving their first dose yesterday (23 July) in the next phase of the vaccination rollout.
The village team coordinated and assisted the process with Amrit Ram, pharmacist and director of Pharmacy Care Group and his team of 18, beginning at 5.30am.

The majority of care centre residents and staff had already had their first dose in the preceding weeks and the aim this time was to complete the second dose for them and do the first dose for everyone else in the village.
Village Manager Dean Jackson said even contractors working at the village were invited to receive their dose, and with six vaccination cubicles set up they had the ability to complete 800 doses during the day.
“We started out at around 15 people per half an hour to ease into it but once things got up and running we were doing roughly 15 people every 10 minutes, possibly even more than that,” said Dean.
Groups of residents were booked into each 10 minute window and were required to register with Clinical Manager Ashleigh Griffiths and Regional Operations Manager Lynn Charlton on arrival.
From there, the residents had their details loaded into the system by members of the pharmacy team before being escorted to a holding area near the cubicles. 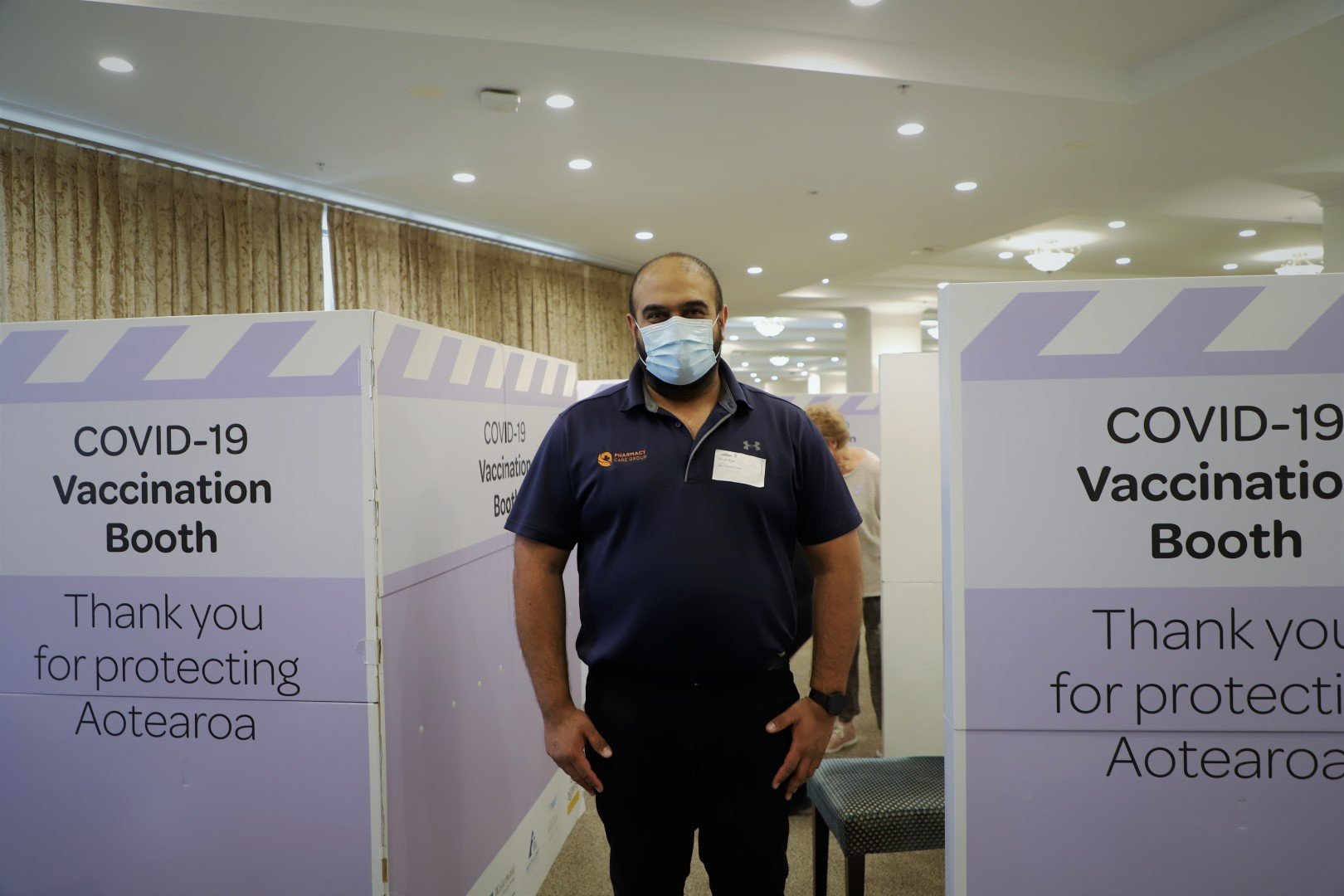 Pharmacy Care Group Director Amrit Ram next to the vaccination booths set up at the village. 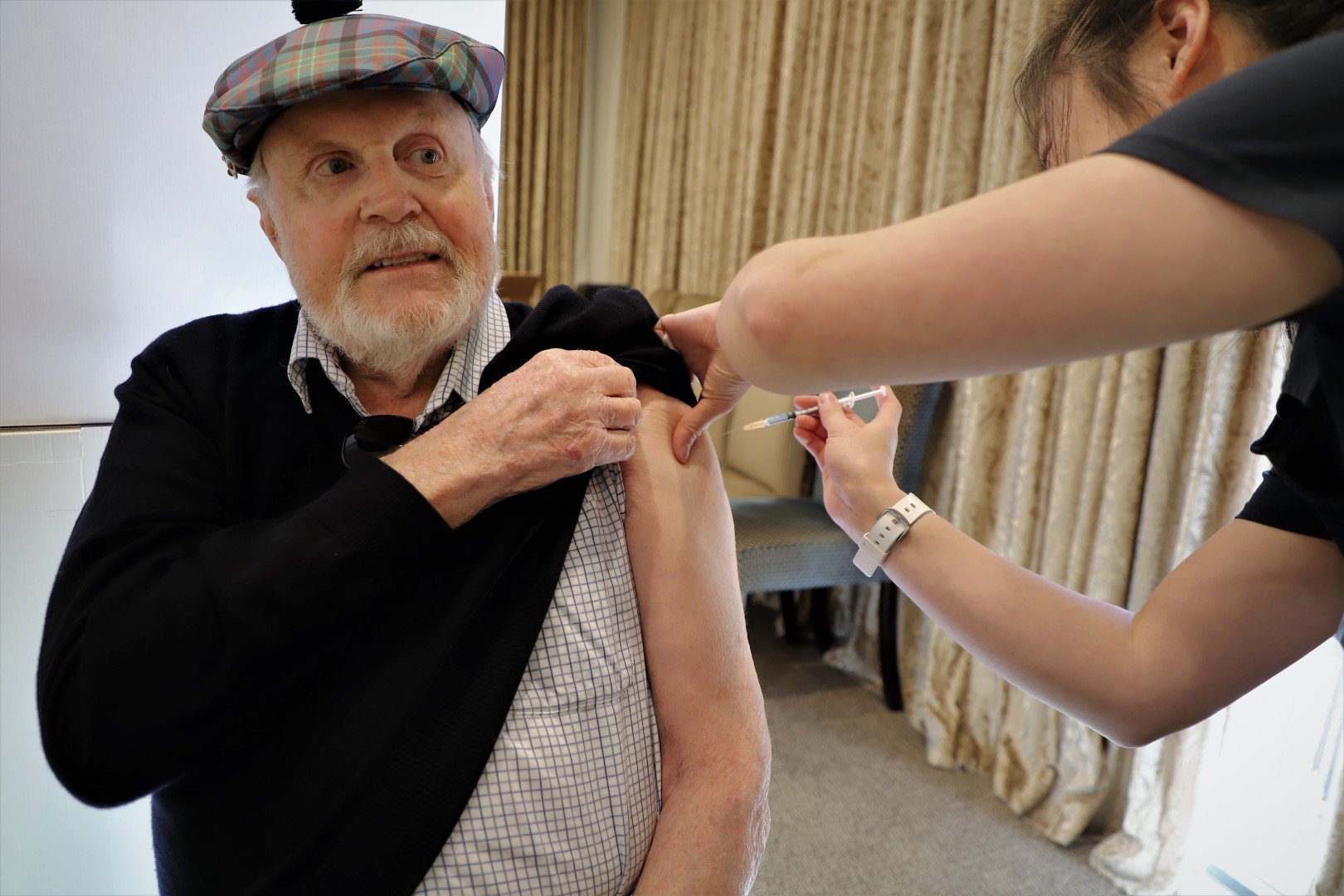 Resident Tom Bowie gets his second dose of the vaccine.

Amongst the questions being asked was whether they felt well, whether they were on any medication and had they had any other vaccinations recently.
As soon as a vaccinator became available, residents then entered the cubicle to receive their jab.
Resident Paul Driessen, also receiving his first dose, didn’t hesitate when the village sent word out about the clinic and was positive about the experience on the day.
“I didn’t even feel it go in, it was so quick. No problems at all.”
Ross Johnson, a retired commercial pilot, said being properly vaccinated had been essential for his job.
“Cholera was a bad one, they must have used a big needle or something because that used to hurt!
“We would carry a yellow card to show we had been vaccinated, and if you didn’t, you wouldn’t have a job.”
Tom Bowie and his wife Gillian received their second dose at the village with Tom happy to be photographed getting the jab – whilst sporting his Bowie tartan cap for the occasion!
“I didn’t feel a thing!” he said.
Fellow resident Joan Swift had a particular goal in mind after receiving her jab, especially in the light of the scare in Wellington which made the news that day: “I can’t wait to stop thinking about Covid all the time!
“The sooner this is done the better!” she said. 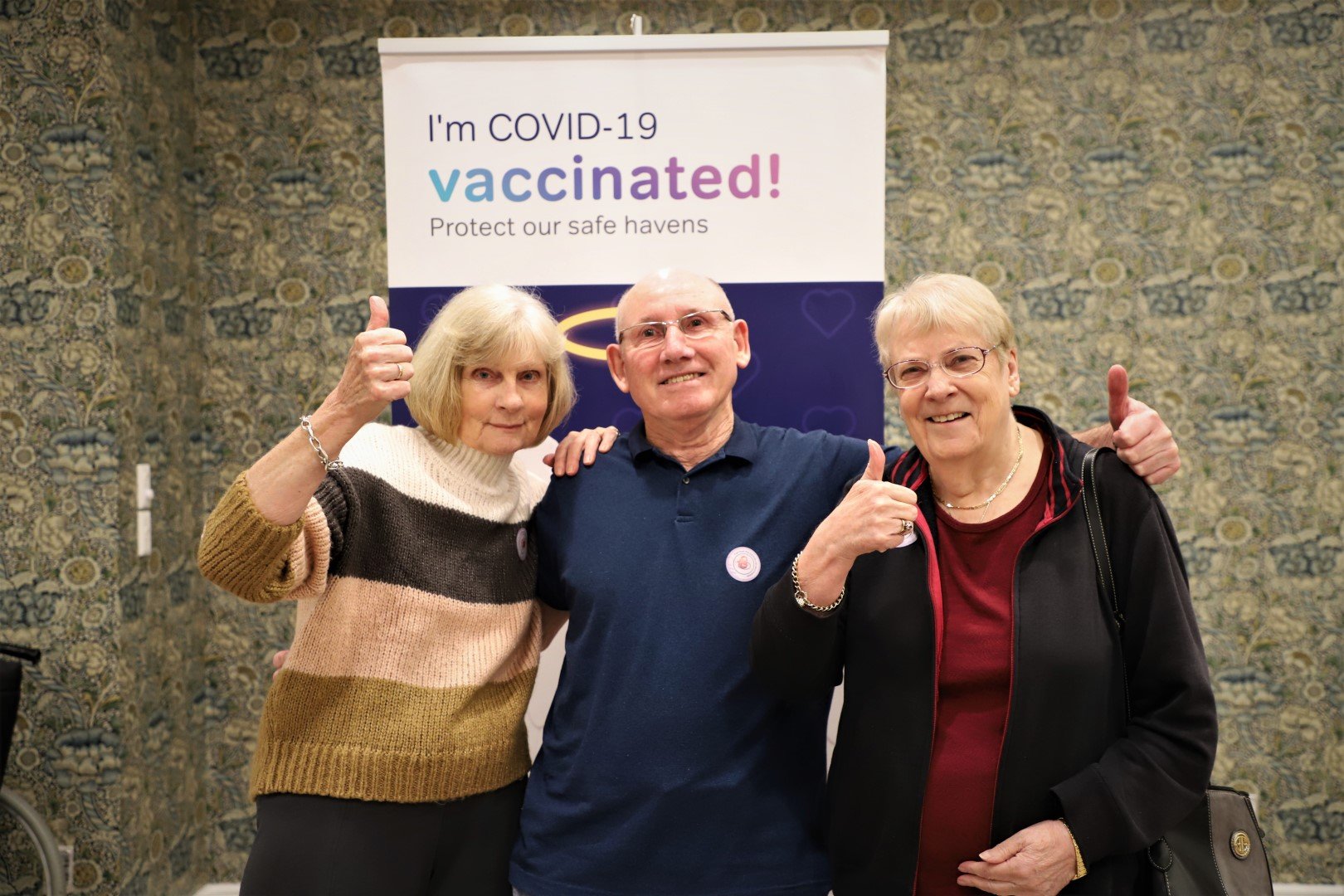 Ellen Lund (left) with Doug and Ann Gibbon after getting their jab.

Others receiving their dose included 102-year-old Joan Daniel who served in the Voluntary Aid Detachment in WW2, Yvonne McNabb, who wasn’t going to let the jab interfere with her usual three hour session of gymnastics coaching at a nearby school, and friends Ellen Lund, and Doug and Ann Gibbon who used the 20 minute stand down period to catch up over a cuppa.
Newlyweds Brian and Pam Armstrong were also pleased to get their injections done. While Pam needed an ice pack for a while to soothe a somewhat stingy arm, that was reportedly the most adverse effect of the day.