Val Dale became the first ever resident at Ryman Healthcare’s Keith Park Retirement Village today after looking forward to the big day for months beforehand.
Everything went like clockwork for the long-time Hobsonville resident, with her housemovers turning up early, taking just 1.5 hours to load up and then a matter of minutes to drive the short distance from her home to the village on Scott Road.
With her daughter Maree and granddaughter Jess following in a convoy behind to help with the unpacking, all that was left to do was take the lift up from the basement car park, cut the red ribbon and turn the key in the lock, all while members of the sales, operations and construction teams looked on!

While her first impressions of the block were the lovely wide hallways, Val saved her biggest compliments for her new two bedroom apartment.
“I’m in! she said. “Oh it’s beautiful!”
Meanwhile, Maree and Jess explored the layout, cooing over the wide waterfall benchtop, the luxurious curtains and the elegant marble tiles in the bathroom.
“She’s really been looking forward to this day,” said Maree. “I’m so happy for her, it’s going to be great.” 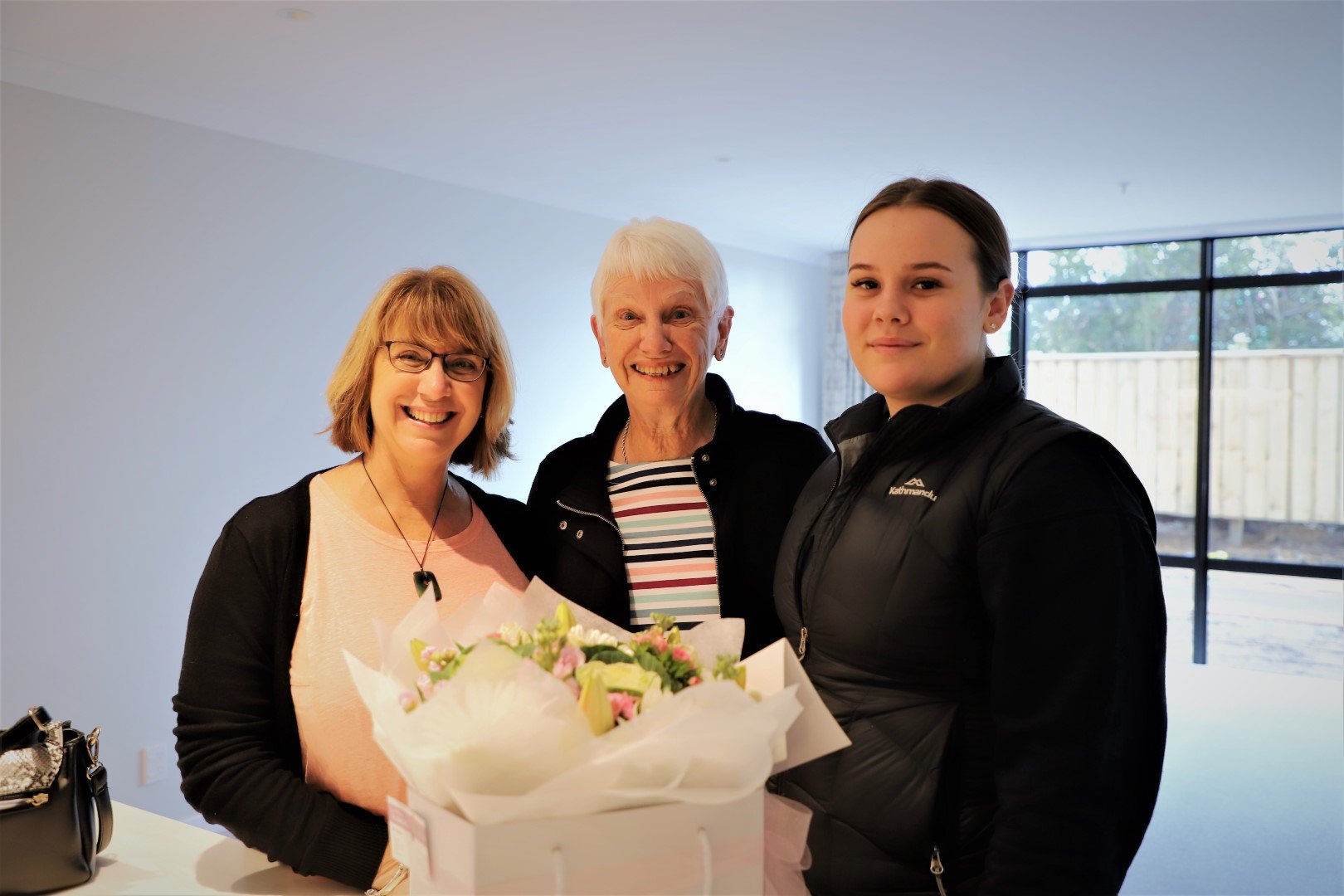 First Keith Park resident Val Dale with her daughter Maree (left) and granddaughter Jess (right) and (above) with Sales Advisor Rosalind Hayhoe about to enter the apartment for the first time.

Having lived in Hobsonville for 21 years, West Harbour for six years before that and then 35 years down the road in Ranui previous to that, Val is glad to be able to remain out west, and the same distance from her beloved Helensville Golf Club.
“I play every Wednesday and Saturday, so depending on how well we go here today, I still might go tomorrow!” she said.
By midday, Val’s family, joined by grandson Ethan, had already filled the kitchen drawers and cupboards and were setting up the bedroom and lounge furniture.
Joining her on the first day was Vic and Alena Ollerenshaw who will also become her next door neighbours. 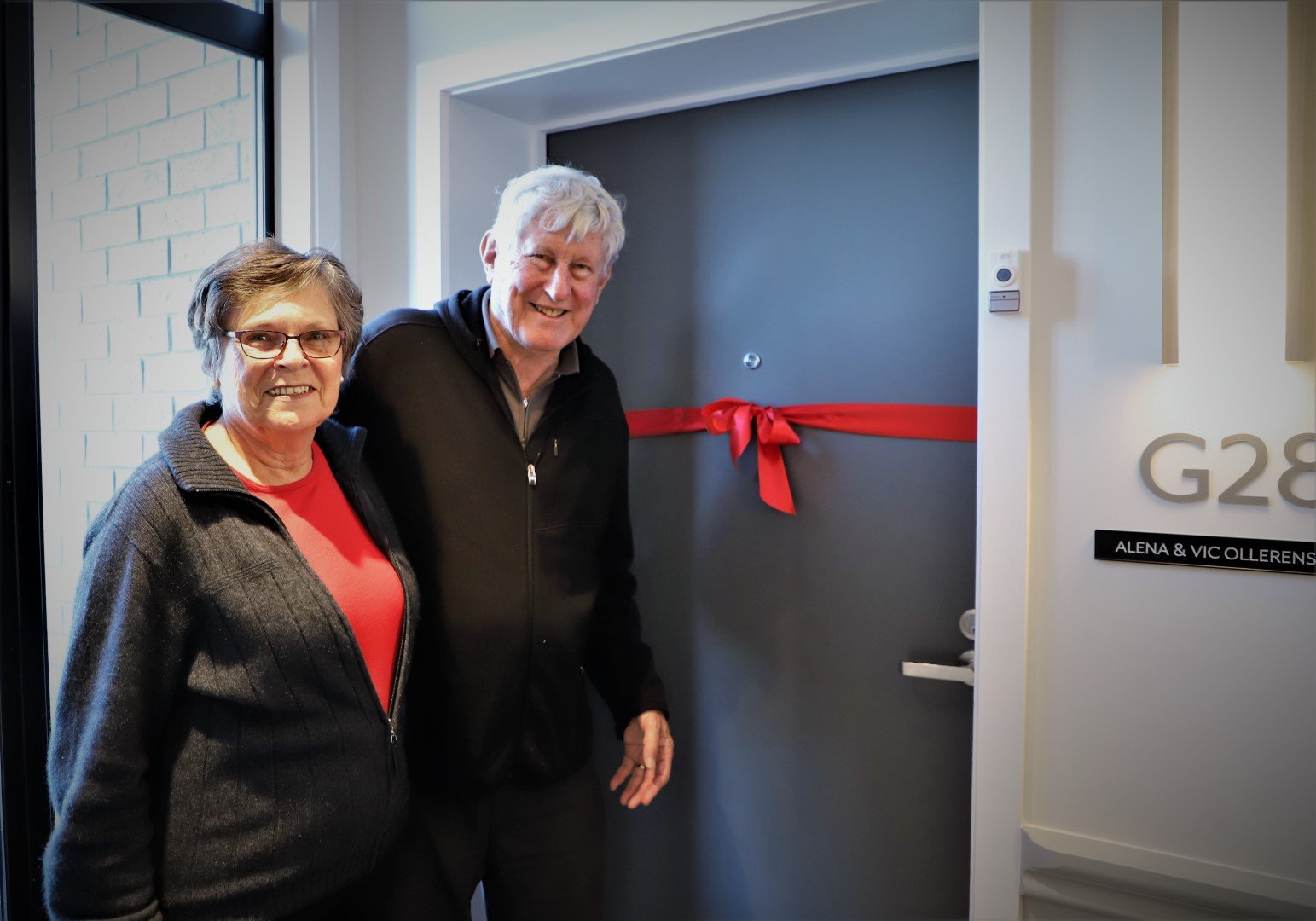 Alena and Vic Ollerenshaw about to cut the ribbon on their brand new apartment.

Their reaction on seeing their sunny corner apartment was equally enthusiastic.
“It’s lovely! It’s bigger than we expected,” Alena said.
“It’s great to finally be in,” Vic added, alluding to the six months of being ‘homeless’ after selling their house. 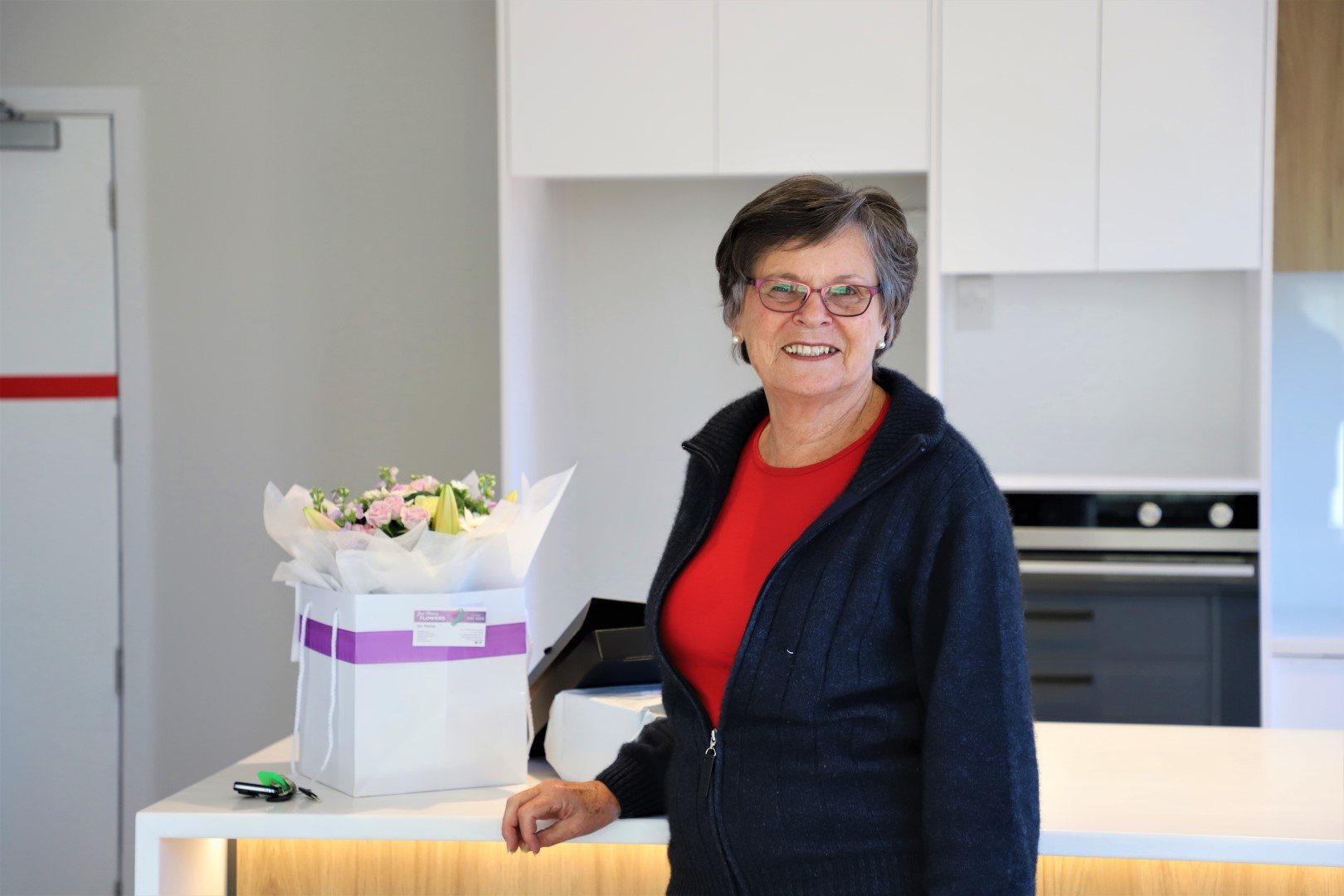 Alena is all smiles on seeing her new home.

Project Manager Aurelian (Ricky) Ciobanu joined the sales and operations teams in welcoming Val to her new home.
“It’s been an intense few weeks getting to this point and the whole team has put in a huge effort to help us get over the line which I am so grateful for,” he said.
Although the weekend’s tornado and wild weather had delayed some last minute landscaping from being completed, Ricky said the key thing was that the building was safe and ready to start enjoying.
“We did have some challenges but we pulled through and we made it and it looks really beautiful.”
The focus is now on ensuring that the next group of residents have a great move-in experience. Residents moving into the next block to open will start moving in during July.