John, a New Zealand hockey team member from the 1956 Melbourne and 1960 Rome Olympic Games, remembers close matches and physical tussles, as the team played its heart out from the get-go.

John and New Zealand team made their Olympic debuts in Melbourne. He recalls the Australian adventures, as he sits alongside his wife Dawn - both residents of Diana Isaac Retirement Village in Mairehau, Christchurch.

Now, John is looking forward to his next Olympics adventure. Ryman Healthcare is bringing together 12,500 residents across 41 villages in New Zealand and Australia to compete in the world’s first international retirement village Olympic Games. The residents will be competing in cycling, swimming, bowls, a 21.6 km team walking relay and Quiznastics (gymnastics for the brain).

Back in 1956, John and other Kiwi Games athletes were invited, and went, to social events hosted by gracious Melburnians.

“Even if you were wandering around outside the village, a car would pull up and they would say ‘hey you guys, we’re having a barbie tonight, would you like to join us?” John says.

Times at the Games were different back then, and security settings were much lower. In 1960 John was able to watch, trackside, the performance of Kiwi medal winners including Barry Magee, Peter Snell and Murray Halberg.

As well as these memories, John and Dawn have plenty of Olympic memorabilia on their walls in their independent apartment at the village. 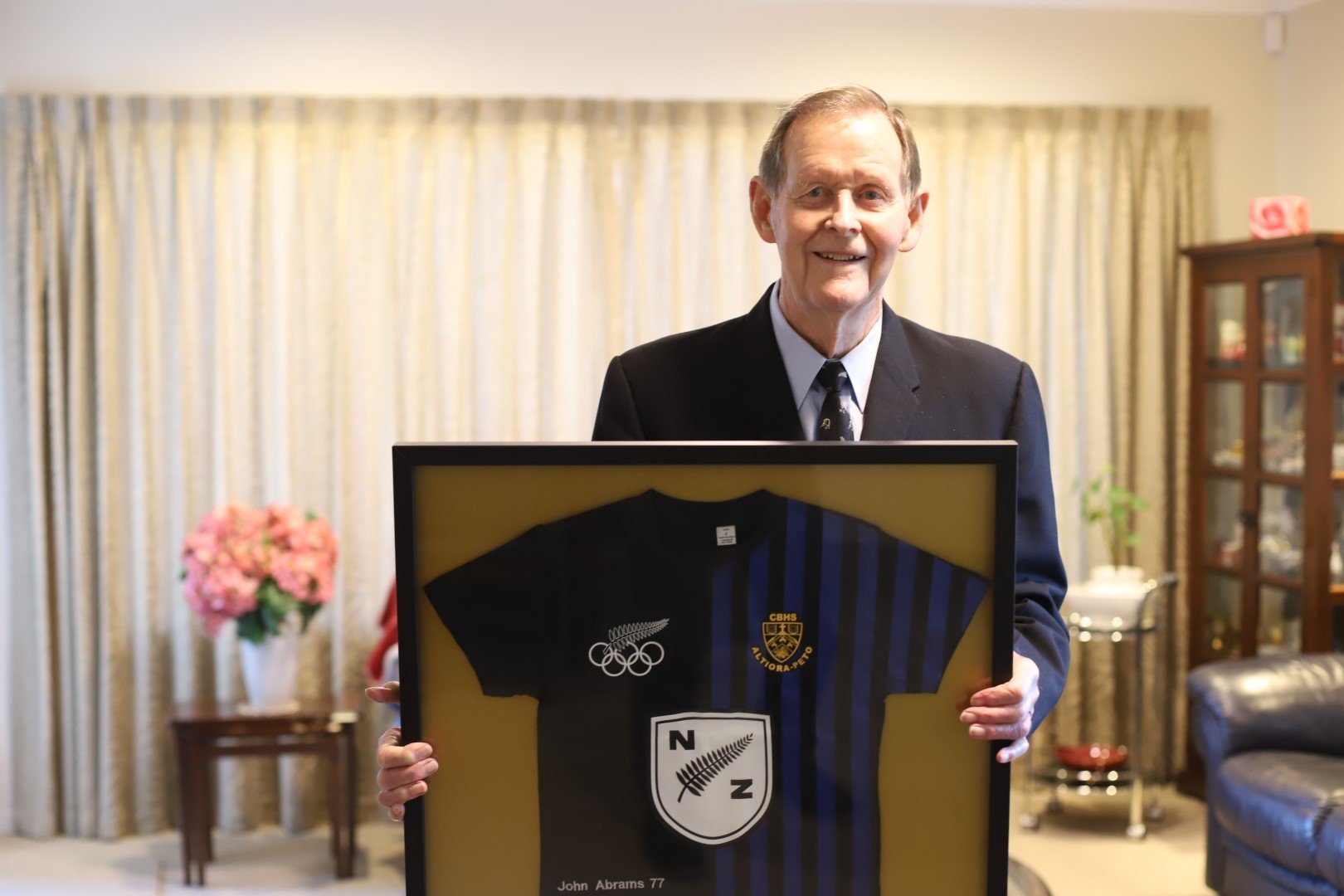 John’s historic collection includes photos, an Olympic tie and an Olympic the blazer from Rome. The items date back to the Games and more recently to get-togethers. As Olympians he and others were honoured by the Christchurch High School (CBHS) Old Boys with names inscribed on a sports shirt. His shirt is now framed and mounted on the wall.

Both Woolston Primary School, CBHS and later Woolston Hockey Club were proving grounds for John and others. His school mates Noel Hobson and Ross Gillespie (who later coached the Kiwi 1976 gold medal-winning team) played together in 1960.

Provincial and national representation followed, then John says that he and his family had to listen to a 6pm radio broadcast to find if he was included in the team for Melbourne.

The departure for Melbourne was quite a ruckus. His father, Dawn and young daughter, Nicola, saw him off only to discover the car keys (to get home) were in John’s pocket and on the plane. They were eventually tossed down by the pilot to ground level before the aircraft took off.

In Melbourne the team finished in 6th place just behind Australia.

The Rome Games were long-haul in terms of travel, with the hockey players ending in 5th place this time after beating Australia in the final match.

John says the team were very close to contending for a medal, but lost 1-0 in a thrilling quarter-final against Spain. The score could have been reversed; he says.

“We had a penalty corner and the ball was definitely going into the net, and it hit one of their defenders in the jaw and went out,” John says.

“A few minutes after that, they scored, and then it was full time.”

The team was consigned to the sidelines. “(But) one of the marvellous things, then and in Rome, the competitors had a reserve stand at the main stadium,” John says.

John got to sit beside athletics coach Arthur Lydiard in the Rome stadium to see the arrival of the marathon athletes including Barry Magee (now a Ryman resident at Murray Halberg) who finished with a bronze medal.

“It was a fabulous effort,” he says.

Snell, in fact, spent a lot of time at the dining table with the hockey team, knowing well the Auckland team members having played hockey against them.

“Peter used to come and eat with us, because he knew these guys. And it was quite interesting because he said: ‘I’ve got some heats today’ and you’d see him the next morning (asking) how’d you go Pete and he said; “oh yeah I got through, I’m into the quarters …”

Years later John, a trained lifesaver, found Snell cramping in the water at Tahunanui Beach near Nelson. He pulled him to safety, with Snell forever grateful.

Both John and Dawn are looking forward to the Tokyo summer Olympics and Ryman’s version of the Games. 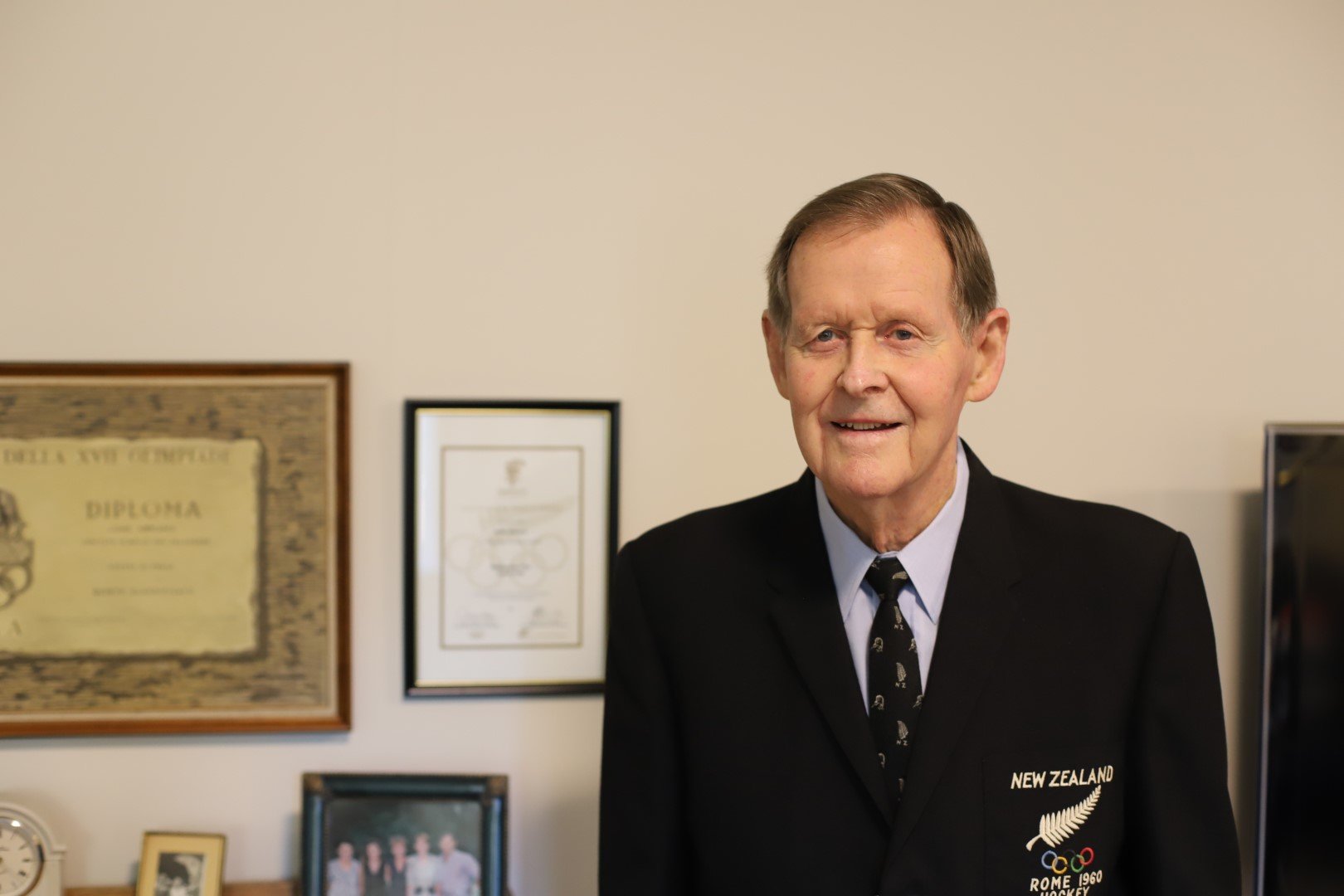