An online cooking challenge designed to keep residents entertained in lockdown has seen newly arrived Keith Park resident Jilly Waldock beat off the competition to take the prize.
Jilly won Ryman Healthcare’s Covid Cupboard Challenge after celebrity chef Brett McGregor singled her pasta with pumpkin and carrot sauce dish out from the dozens of entries from around New Zealand.
Brett, the winner of the first ever Kiwi Masterchef competition, chose the dish as the one he would demonstrate cooking during an online cooking zoom session, adding a few of his own tweaks to juge it up even more.

While winning was a thrill, Jilly said the whole idea had been ‘good fun’.
“It was just something different to do in lockdown.
“You can only read your book or watch tv for so long!”
The challenge set to residents was to come up with either a sweet or savoury dish using five of the ingredients listed along with anything else they had in the pantry.
Jilly used pumpkin and carrot to make a sauce topped with capers, croutons, cheese, bacon and even an improvised garnish and used all her years of preparing food to create what Bruce predicted would be a winning dish.
“I made it up as I went. We didn’t have any fresh herbs so I used the top of Bruce’s radish seedlings instead.
“But I have done a lot of entertaining in my time and eating out at restaurants.
“Bruce said he knew I was going to win – he ate it for lunch and I think he was quite delighted to get something a bit more than a bit of cheese and bread!” she laughed. 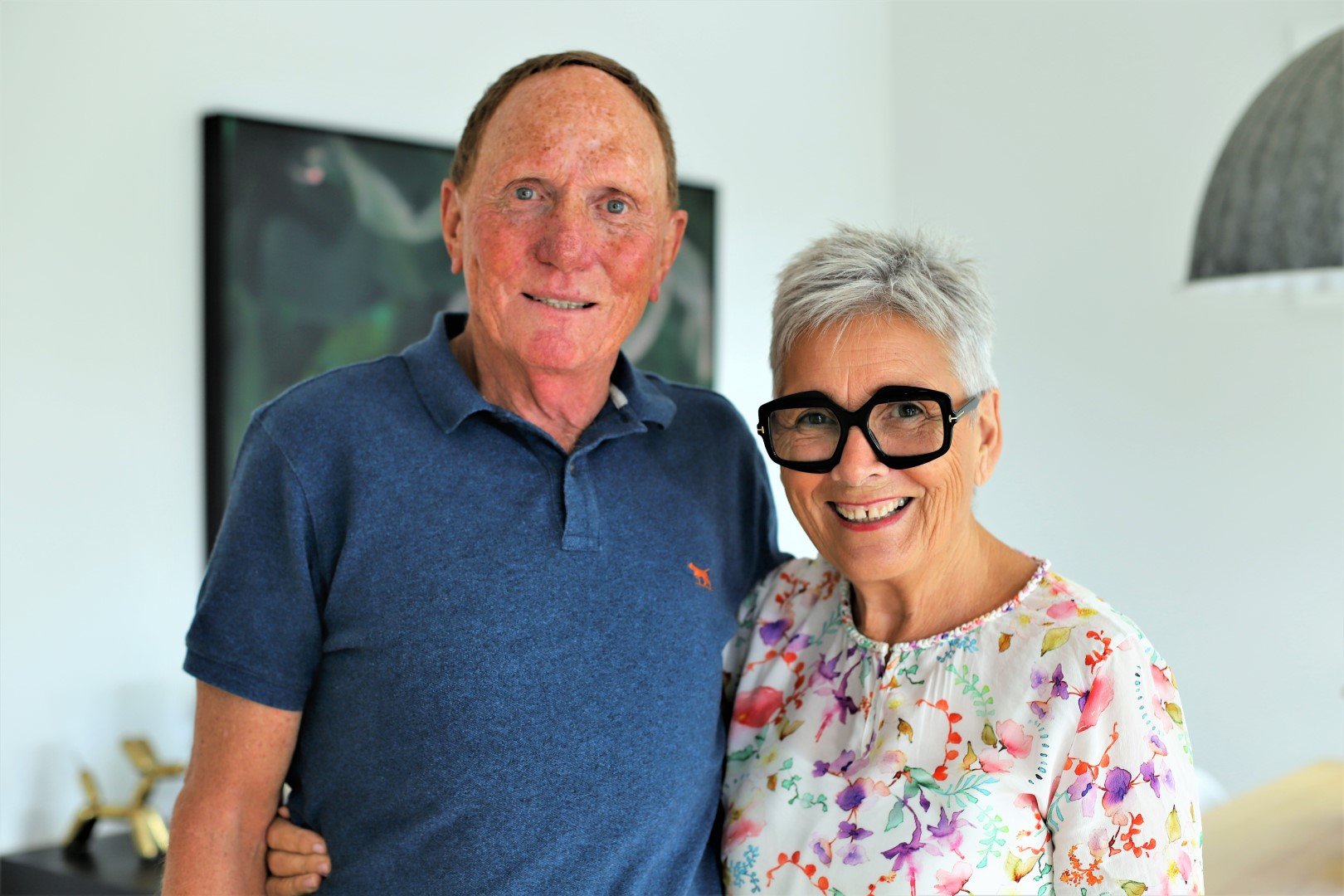 Jilly Waldock with husband Bruce (pictured above before they moved into the village) tuned into Zoom to watch celebrity chef Brett McGregor cook up her winning dish (below). 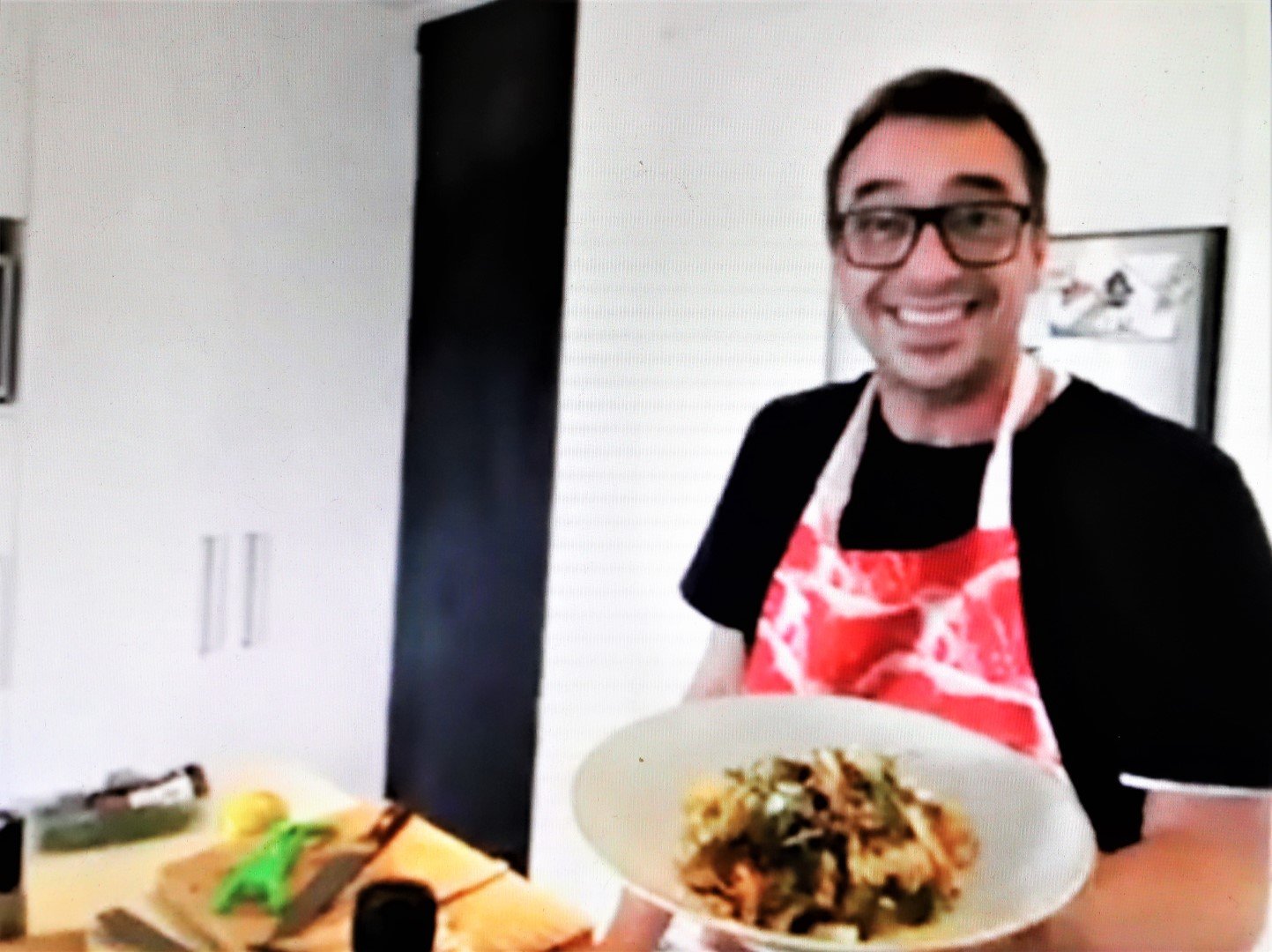 Brett tweaked Jilly’s dish by using prosciutto instead of bacon, parmesan instead of tasty cheese, and fresh pasta instead of dried.
With his teenage son filming him as he cooked, Brett said it was something of a first to invite 150 guests into his kitchen at home via zoom.
“A huge thank you to everyone who submitted. I was floored by some of them and they’ve given me some great inspiration,” Brett said of the entries.
“A few things I’d never seen or tried and I’ve thought I’m going to try that!
“I thought Jilly’s dish was amazing. It’s a delicious creation and has inspired me to recreate the dish using the same ingredients but just adding something to it to elevate it and give it a little bit of magic.”
The other finalists were Valda Entwisle from Hilda Ross for her Japanese Curried Mince with Pasta, Jo Moore from Murray Halberg for her Berry Delight, Carol Kenworthy from Jean Sandel for her Tropical Risotto and Elizabeth Wagner from Malvina Major for her Lockdown Self Crusting Quiche.
Jilly’s efforts are all the more impressive when you consider they have only the barest of essentials in their kitchen.
“I had Bruce beating the sauce with a fork – we didn’t have any stick blenders or anything like that,” Jilly said.
“Before we went into lockdown we had been all over Auckland buying furniture but we were still waiting for a lot of it to be delivered.” 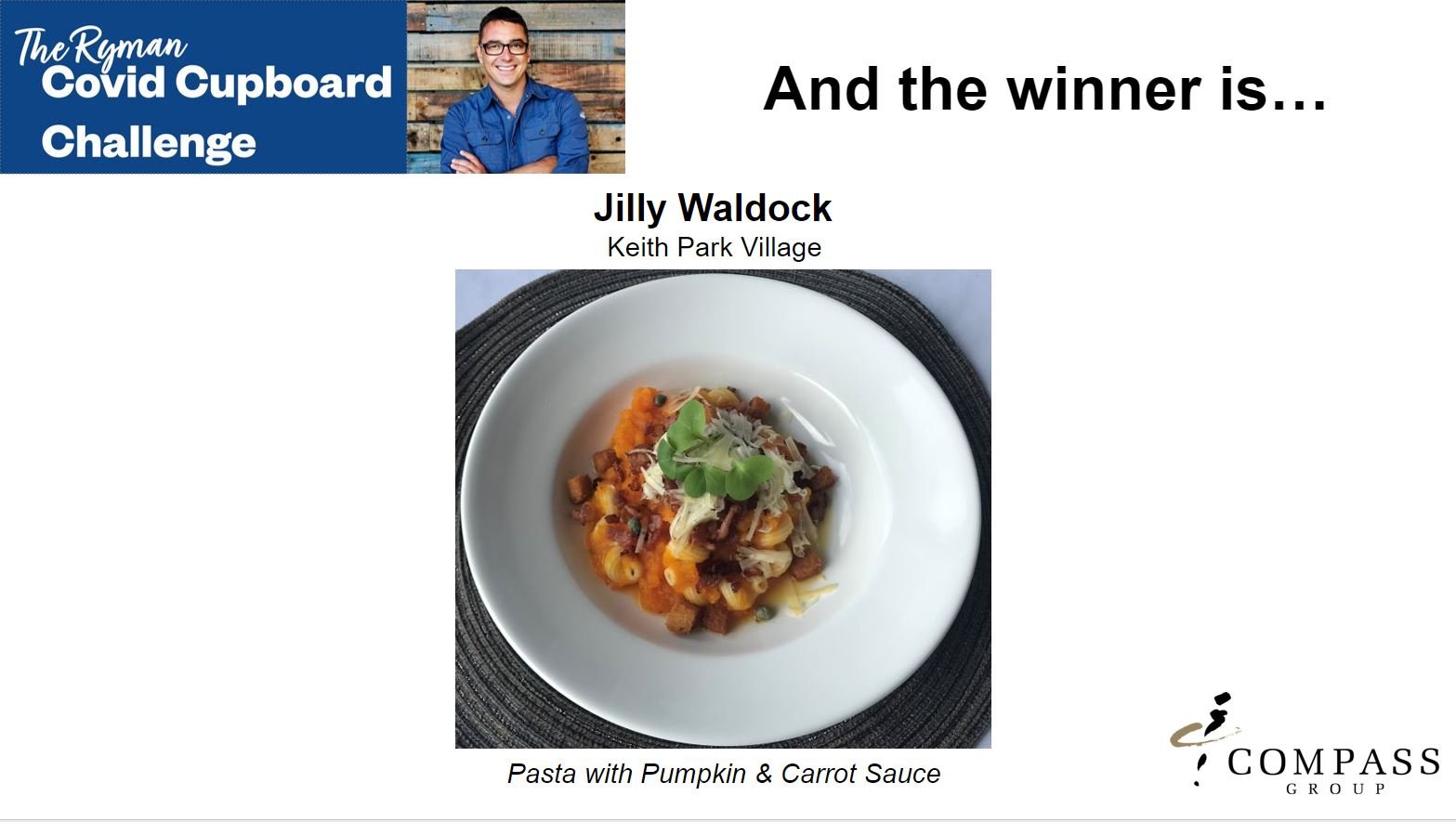 Jilly's winning dish before Bruce ate it for lunch!

Luckily they had their beds and a couple of garden chairs and Village Manager Kim Dawson loaned them the card table plus a couch from the show unit to tide them over.
Jilly said they were now looking forward to the competition prize – meeting Brett in person for a cooking demonstration in the village after lockdown.
The champion village for the most entries submitted was Edmund Hillary Retirement Village.
They were Richard Ward with his Chocolate Peppermint Truffles, Bruce Burton with his Vegetable Orzo Pasta with a Twist of Streaky Bacon, Glennys McGlashan for her Meatloaf and Sue Wakelin for her 3 Cheese Lasagne.
Village Manager Dean Jackson said: “I am extremely proud of my talented residents and their amazing and creative skills with limited ingredients.
“I think there will be a few requests to sample some of these culinary creations.
“Could this be the start of Ryman’s own MasterChef competition?!”

Jagdish and Valerie love being part of the Ryman family

As Jagdish and Valerie Natali near their first anniversary of living at Murray Halberg Retirement Village, they grow inc...

Bubble buddies bring the best out of lockdown

The misery of returning to lockdown was relieved in a surprising way for three Keith Park Retirement Village residents w...