A triumphant bowls four from Hilda Ross have taken the win in the world’s first remote lawn bowls final using Artificial Intelligence.
It was a tense tussle with the finalists from Jean Sandel in New Plymouth and Hilda Ross in Hamilton lining up for the final – 951km apart.
The Hilda Ross team, made up of Wendy Cunningham, Frances Bryant and brothers Lloyd and Neil Clarke (skip), had the home town advantage, playing just down the road from their village at sister village Linda Jones in Flagstaff.

The Jean Sandel team – Allan Bridgeman, Allan Madgwick, Margaret Cole and Gloria Shaw (skip) – were hosted by the friendly southerners at Diana Isaac in Christchurch, 951km down the road.
The teams were playing for the gold medal in the inaugural Olympics@Ryman competition with the sun shining at both venues, albeit with different temperatures, and plenty of backers, many of them singing their support. 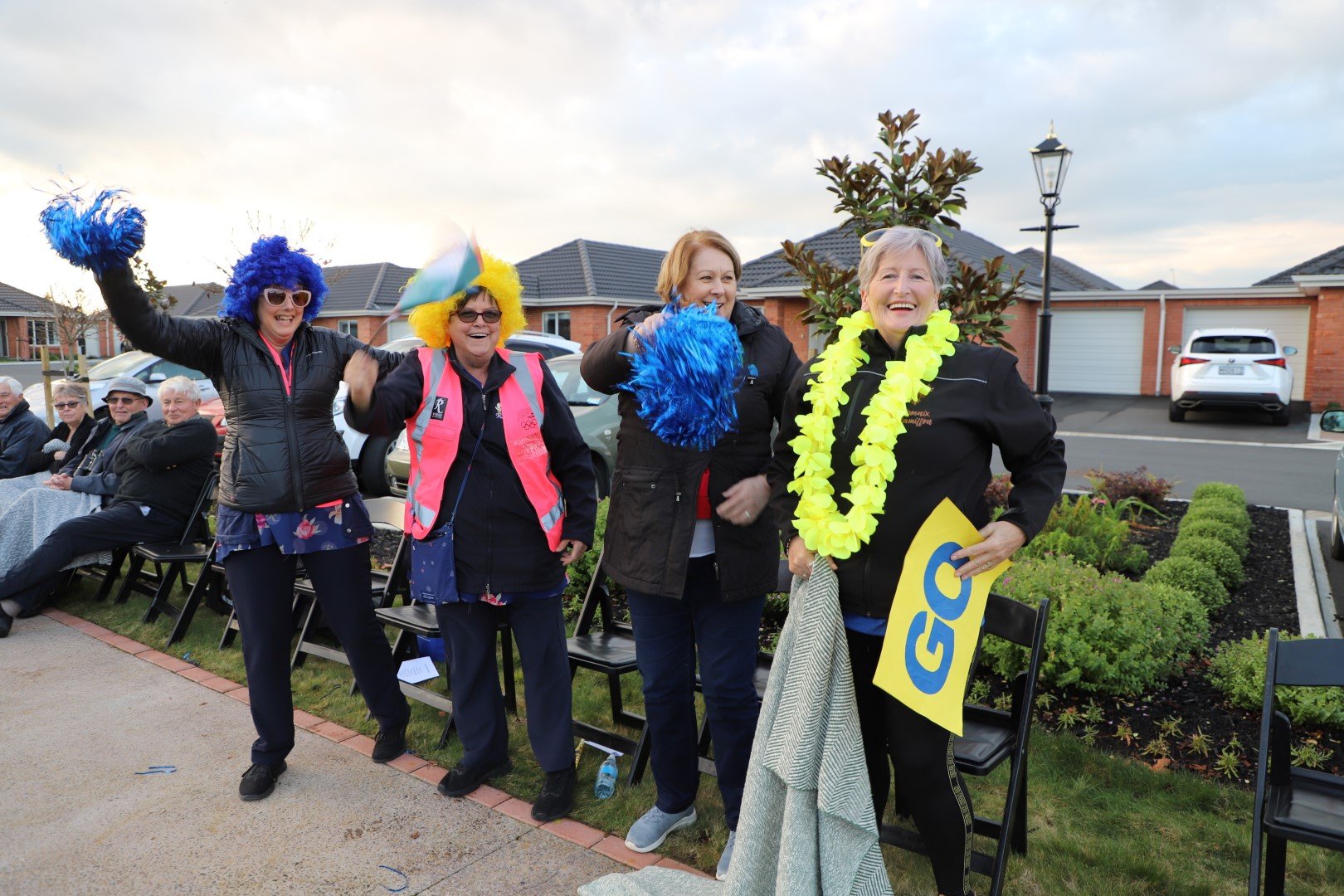 Jean Sandel started strongly, going out to an early lead, and were three up after three ends.
There was a palpable shift of energy in the fourth end after Hilda Ross rallied, taking one shot back, and then finishing with two strong ends, to take the match 6-3 and becoming the Olympics@Ryman’s first gold medallists.
Margaret Cole is the most experienced player in the Jean Sandel team, having played her first game of bowls in 1970.
Margaret was selected to play for New Zealand in 1988 and is the 20th female player to represent the nation.
Gloria has played for Taranaki as a junior and a senior; Allan Madgwick has played as a junior for Taranaki and Allan Bridgeman plays out of the Oakura Bowling Club.
In the Hilda Ross team, Lloyd Clarke has been playing for over 30 years and has repped for Waikato while his younger brother Neil has racked up 28 years of bowls, repping for Canterbury and Wellington. 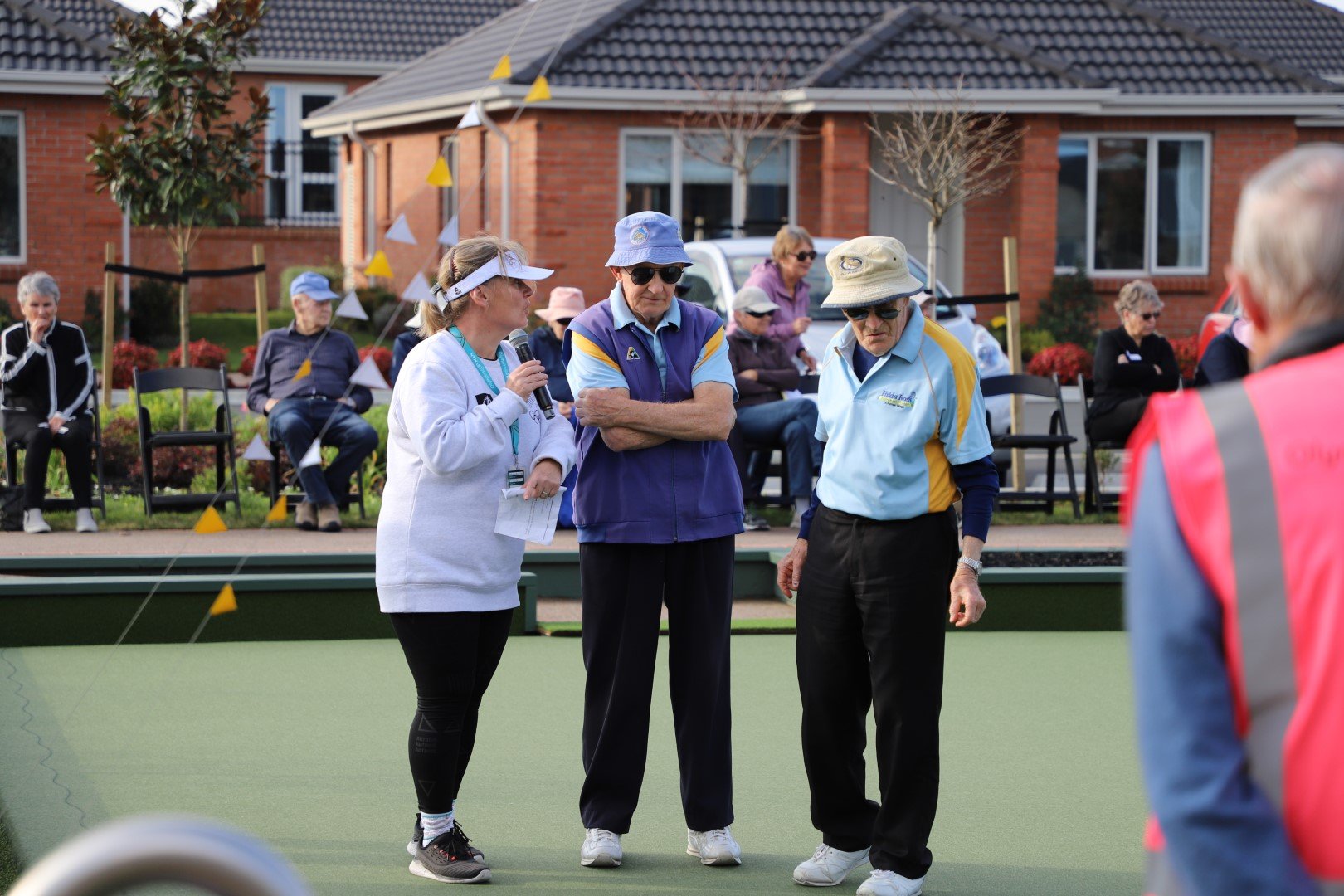 The Clarke brothers and Frances, who has also repped for Waikato, all play for Hillcrest Bowling Club.
After the match, which was attended by bowling ‘royal couple’ Marlene Castle and Kevin Hickland, Lloyd said winning was ‘a nice surprise.’
Neil said the four of them had bonded well as a team, and good communication was the key.
“It’s necessary to have everyone confident with what they need to do.
“Francie and I have played enough together that we communicate well,” he said. 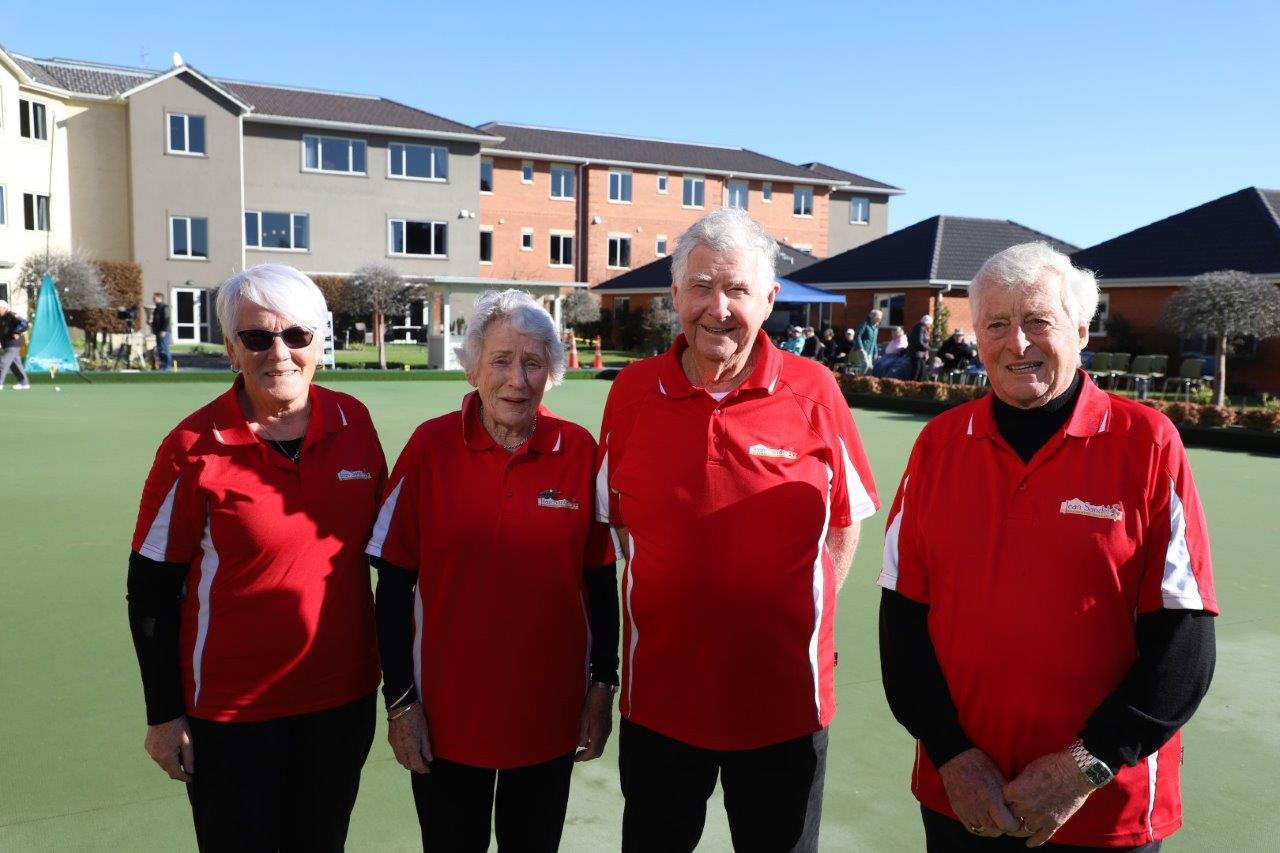 They said Jean Sandel had played ‘very well’.
“They come from Taranaki and some lovely people come from down there,” Neil said, referencing the Clarke family’s Taranaki origins.
While all four appreciated the fitness side of playing bowls, Wendy admitted that she preferred line dancing for a workout.
They described the atmosphere and support from fellow Hilda Ross residents as ‘100%’ and the use of technology in the game as a ‘great start’.
“It’s going to develop even more and will be fascinating to see how that turns out,” Neil said.
The game was played using technology developed by Hamilton-based Aware Group. 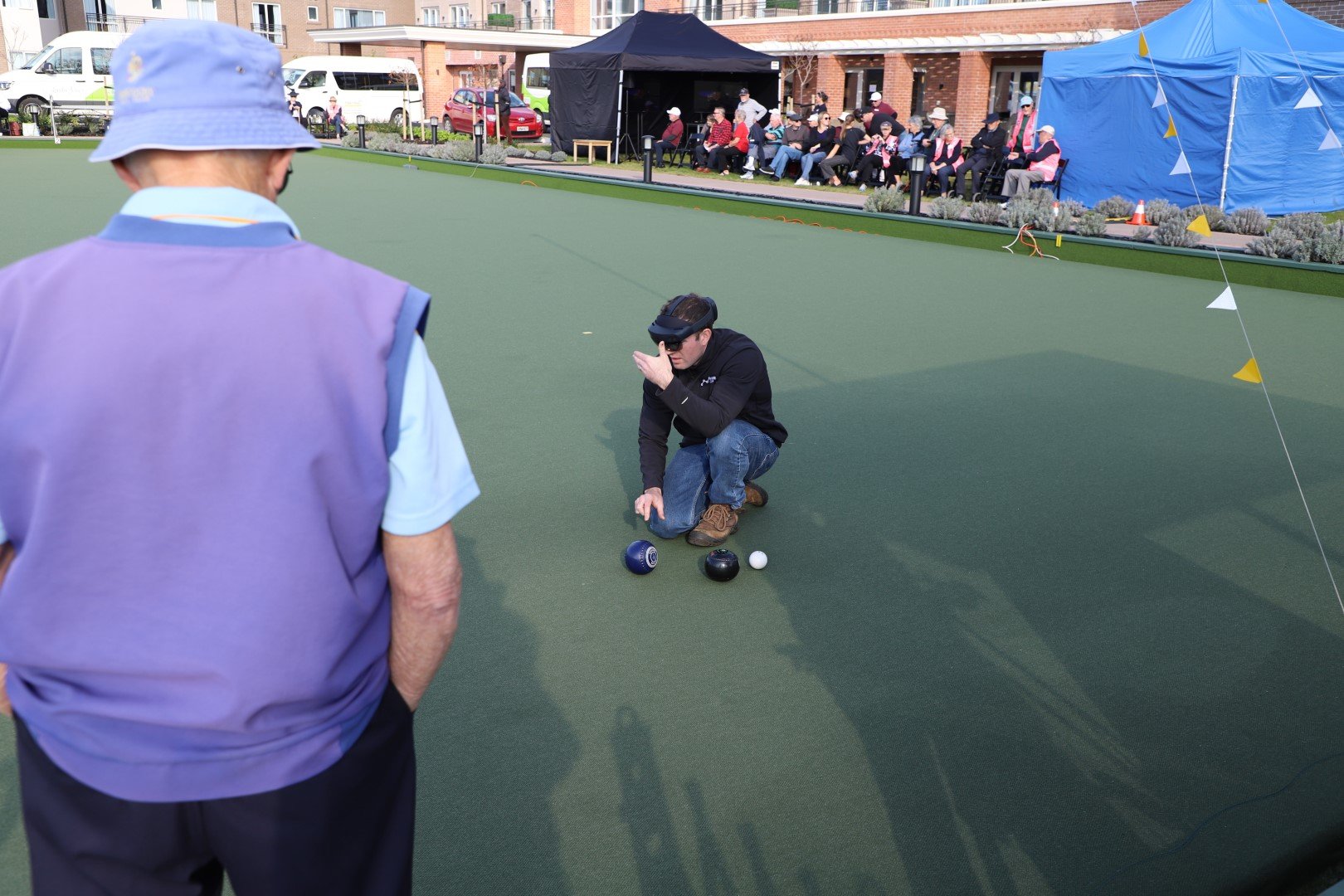 Using overhead cameras set up at each green and Microsoft video streaming technology and a headset that interprets the bowls’ location via GPS, the technicians could accurately place the bowls on the two greens, making it possible for the two teams to play each other.
Ryman Healthcare’s Chief Strategy Officer Mary-Anne Stone, said this was the future of lawn bowls.
“In the future, when we have perfected this tech, any bowls team anywhere can challenge any other to a real contest, pitching all of their physical skill and expertise, against a worthy adversary across distance, assisted by technology.”
She added: “While it is a slower game of bowls than usual, each of our competing teams have already earned the right to be part of making history. It’s truly pioneering.”
Ryman Chief Executive Gordon MacLeod said it had been a wonderful day, and thanked everyone who had worked so hard to put on such a ground-breaking event.
“Congratulations Hilda Ross, you’ve made history,” he said.

Izak Luther might be a new face as Village Manager at Ryman Healthcare’s Hilda Ross Retirement Village but having previo...

Erick Abille started at Ryman in his manager's office in sandals and shorts.