Disabled athlete Alison Smith’s sharp shooting instincts took her to the Big Apple, to compete successfully for an air rifle bronze model in the 1984 Paralympic Games.

Recently, Alison has been relaxing watching some of the Olympics@Ryman events at Diana Isaac Retirement Village, where she lives. While Alison is low key about her bronze from the 1980s, she does open up about a truly amazing life.

The Big Apple or New York proved a mighty exciting place for her. Alison took out the Women’s Air Rifle Integrated event, and while Los Angeles was the main location for the Olympics, the Paralympian competitors competed in other locations including Long Island, New York.

“The big excitement was the President of the United States was arriving via helicopter to open the Games. I had never seen so many policemen, (and) snipers on top of the buildings… four helicopters arrived, hovering over the stadium. Eventually one landed and out hopped Ronald Reagan along with his entourage,” Alison says.

Alison is the first and only woman ‘shooting para’ athlete to date to have represented New Zealand at a Paralympic Games.

“I competed in a three-positional shoot competition: prone, kneeling, and standing, all from the wheelchair. It was 60 shots in each position… I proudly came home with a bronze medal,” Alison says. 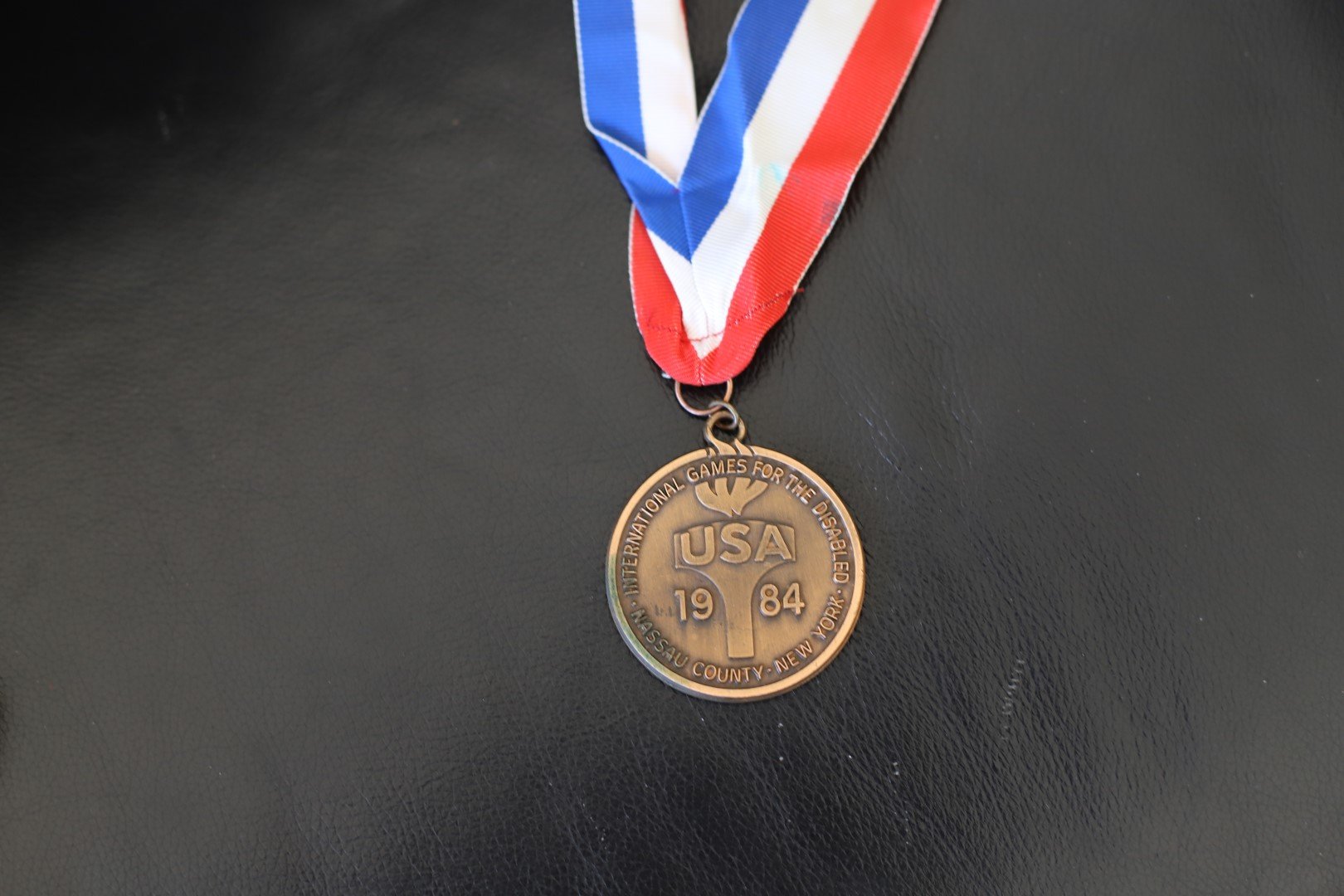 Alison is upfront about her life. She was born on September 13, 1950 minus her right leg, from the hip, and the left, from the upper third of the thigh.

“So, it is just easier to say I am a double leg amputee. Her car licence plates, and her email, refer to her as ‘legles’, showing her fantastic sense of humour.

Life was not always easy though. Initially, after her birth, she was “whipped up to Wellington” to live in a place run by Catholic nuns and to be fitted with her first artificial limbs.

“These consisted of little rocker-type pegs on which I learned to balance and move about on,” Alison says.

Her mum and big sister would travel from Lyttelton by ferry to visit her in Wellington once a month, until she returned home to Woolston at the age of four to her parents, three sisters and brother.

Her parents made sure she had as near normal life as possible, and later she had prosthetic limbs that helped keep her on the move. She remembers famous World War II RAF pilot and amputee Sir Douglas Bader coming to the Glenelg Health Camp, on Murray Aynsley hill, Christchurch, in November 1956.

While her memories of the visit have dimmed there is a newspaper article saying that when Bader met Alison he lowered himself to the ground so he could talk to her on level terms of height.

“The photo shows me with a brown paper bag, him sitting on the floor with his pipe in his mouth. I was clutching three autograph books (for) my sisters and brother.”

Following the completion of a ‘commercial course’ at Cashmere High School she took on various roles, including working for the NZ Refrigerating Company. Following the purchase of a “brand new mini… fitted out with hand controls, I was able to go to all the NZ Refrig social dos.”

She joined the Paraplegic Association, receiving some archery training from Olympian Neroli Fairhall, then was convinced by a couple of guys to try out air rifle target shooting at the Ollivers Road rugby league hall.

“One of the guys that came with the air rifles later became my husband Len.”

She has other strings to her bow. In 1986 she competed at the FESPIC Games in Surakarta, Indonesia, where she won an amazing total of four gold medals in air rifle and air pistol. In March this year she says she was honoured to be awarded ‘no. 53 Paralympian’.