Back to Ryman news
Back to Ryman home
Written by Maryvonne Gray
on June 12, 2019
The Himalayan Trust, founded by Sir Edmund Hillary in the 1960s, received a $5,000 boost raised by residents at the Ryman Healthcare village named after him last week.

The residents who took part were inspired by the Trust’s Summit Challenge, where fundraisers seek sponsorship to climb, bike, run or hike the height of Mt Everest – 8848 metres.

At the village, residents decided to take 8848 steps and for those who couldn’t manage it, they sewed stitches instead.

Village Manager Dean Jackson, who dubbed the effort the ‘Stitch ‘n Step’, said it was an incredible effort by the residents.

One resident, Yvonne McNab, completed a beautiful quilt for raffle while others rallied their neighbours to dig deep into their pockets to sponsor their stepping efforts.

General Manager of the Himalayan Trust, John Loof, joined Lady June Hillary and her grandson Sam to receive the $5,000 cheque.

“On behalf of the trust I would like to thank everyone for their efforts in raising this amount for us.”

John told the residents that he had just returned from Nepal having shown the Trust’s new patron, Helen Clark, firsthand how they continue Sir Ed’s legacy with the work that they do. 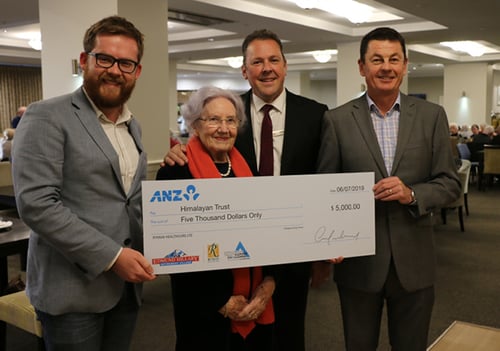 “I couldn’t think of a better person to have as patron,” he said. “She was just fantastic. She reads up on all the information and asks questions and with her large social media following it’s great to have her on board.”

While Mt Everest had received some bad press recently with a number of deaths related to queues and crowding to get to the summit, John said it shouldn’t detract from the work that the Trust continues to do in Nepal.

John went on to outline the kind of work that the money raised by Edmund Hillary village residents will help to continue.

He said two key projects recently completed included setting up a water storage system and fire hydrant system in a remote village usually one hour on foot away from the nearest river, and rebuilding a high school which was damaged during the devastating earthquake in 2015.

“Education is at the heart of success in developing countries like Nepal and this school, which is one of the best high schools in Nepal, has been largely rebuilt by the Himalayan Trust.”

He added: “We are now working with the teachers and doctors who have all come through the schooling system that the trust helped to set up.

“Their parents were illiterate and now they’re educated and taking control of their country’s destiny.

“It’s very rewarding to see, and that’s an example of the work that the trust is doing and continues to do thanks to the support of wonderful people like you.”