A record $473,000 donation by Ryman Healthcare to the Stroke Foundation will be used to make a difference to the lives of thousands of Kiwis.

Residents and staff at Ryman Healthcare’s villages raised the money at hundreds of fundraising events over the past 12 months.

Ryman funded a Stroke van which has travelled the length of New Zealand delivering 10,000 free blood pressure checks over the past eight months.

“About 1% of the people we’ve checked so far have had dangerously high blood pressure, so it’s likely that we’ve saved lives already.

“What’s even better is that we’ve helped a whole lot more people to do things differently to manage their blood pressure and that will make a big difference to their lives.

“Having the funding and the van has allowed us to extend our blood pressure awareness work from one week in October each year to all year round.’’

The money was raised at hundreds of events at Ryman Healthcare’s villages and offices in New Zealand and Australia.

In Melbourne, where Ryman has two villages, an additional $14,000 was raised which will be donated to the Stroke Foundation in Victoria. 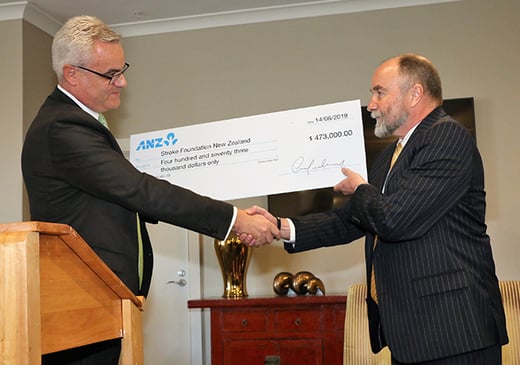 Ryman Healthcare Chief Executive Gordon MacLeod said it was a record year for fundraising, taking the amount raised over the past 20 years to more than $3.6 million.

“Everyone’s got in behind the Stroke Foundation and it’s the most we’ve ever raised for a charity partner.
“It’s been a huge success at raising awareness about the risks of stroke, and has made a tangible difference to many lives.’’

Residents and staff focus their fundraising efforts on the charity for the next 12 months, and Ryman Healthcare matches every dollar they raise at the end of the year, so the charity receives double the amount raised.

Ryman has donated more than $3.6 million under its charity partnership programme since 1999.

The board of Ryman Healthcare has announced that Greg Campbell will succeed Dr David Kerr as its Chair from January 1, 2...