The buzz of excitement was almost tangible as the teams and their enthusiastic supporters from five Auckland villages gathered at the AUT Millennium Centre today for the Olympics@Ryman relay walking finals.
Residents from Possum Bourne, Bruce McLaren, Murray Halberg, Edmund Hillary and Grace Joel prepared to strut their stuff in a combined effort to cover 21.6km with each individual walking 1.2km three times.

The five villages were joining other groups of villages up and down the country competing over three days at different venues in the relay walking finals.
They were kitted out with bumbags which would scan each lap via a special reader as they went past, plus a fitbit to measure the time, distance and of course steps. 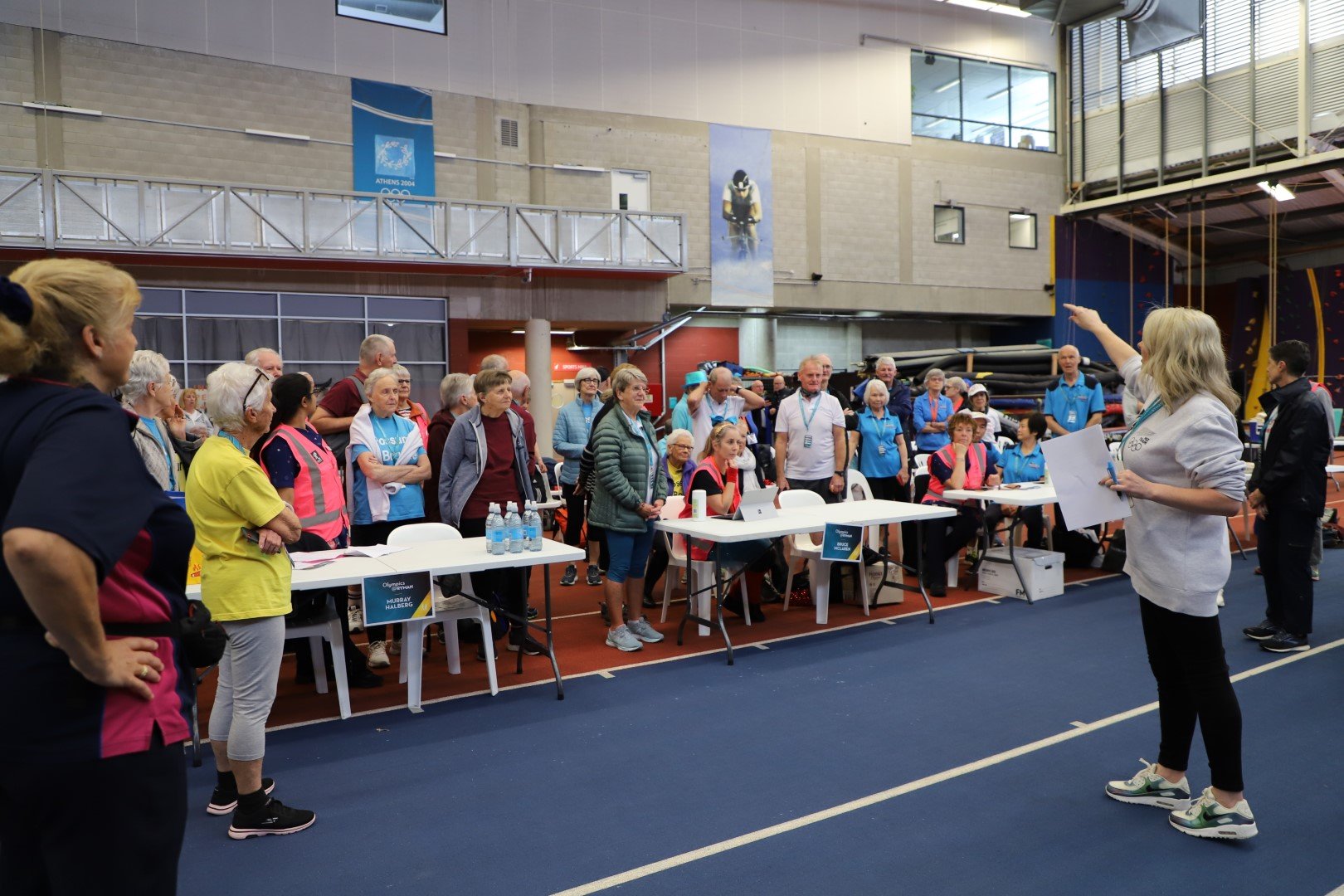 After a briefing by the Ryman team, including a reminder that the whistle would be blown on anyone breaking into a run, the first walker from each team of six took their place on the start line.
And then they were off!
With upbeat Abba songs playing on the boombox it provided a fitting tempo to walk in time to, as the first of many laps were marked off.
Bruce McLaren’s Edward Woo took an early lead after setting an incredible pace, quickly matched by his wife Jeanette in the number two position, much to the excitement of the Botany village’s support crew. 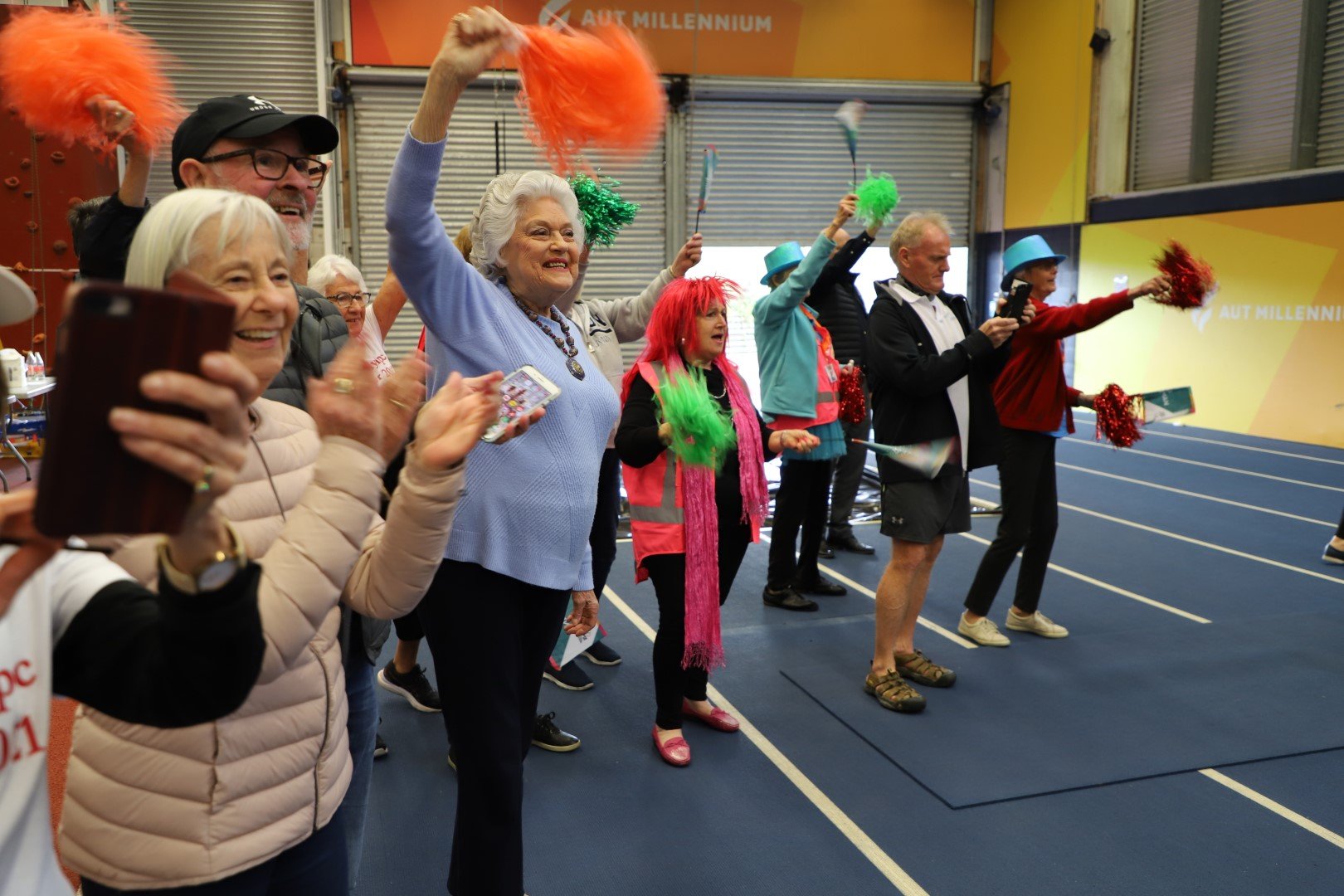 Cheering on the walkers

Indeed, every time a walker passed their village group they would be given a huge, rousing cheer of encouragement often accompanied by a shake of tinsel and pompoms.
The next challenge was the bumbag/fitbit changeover. Each village had a changing station where a nominated duo would unclip the equipment, give them a wipe down and then fix them onto the next walker. 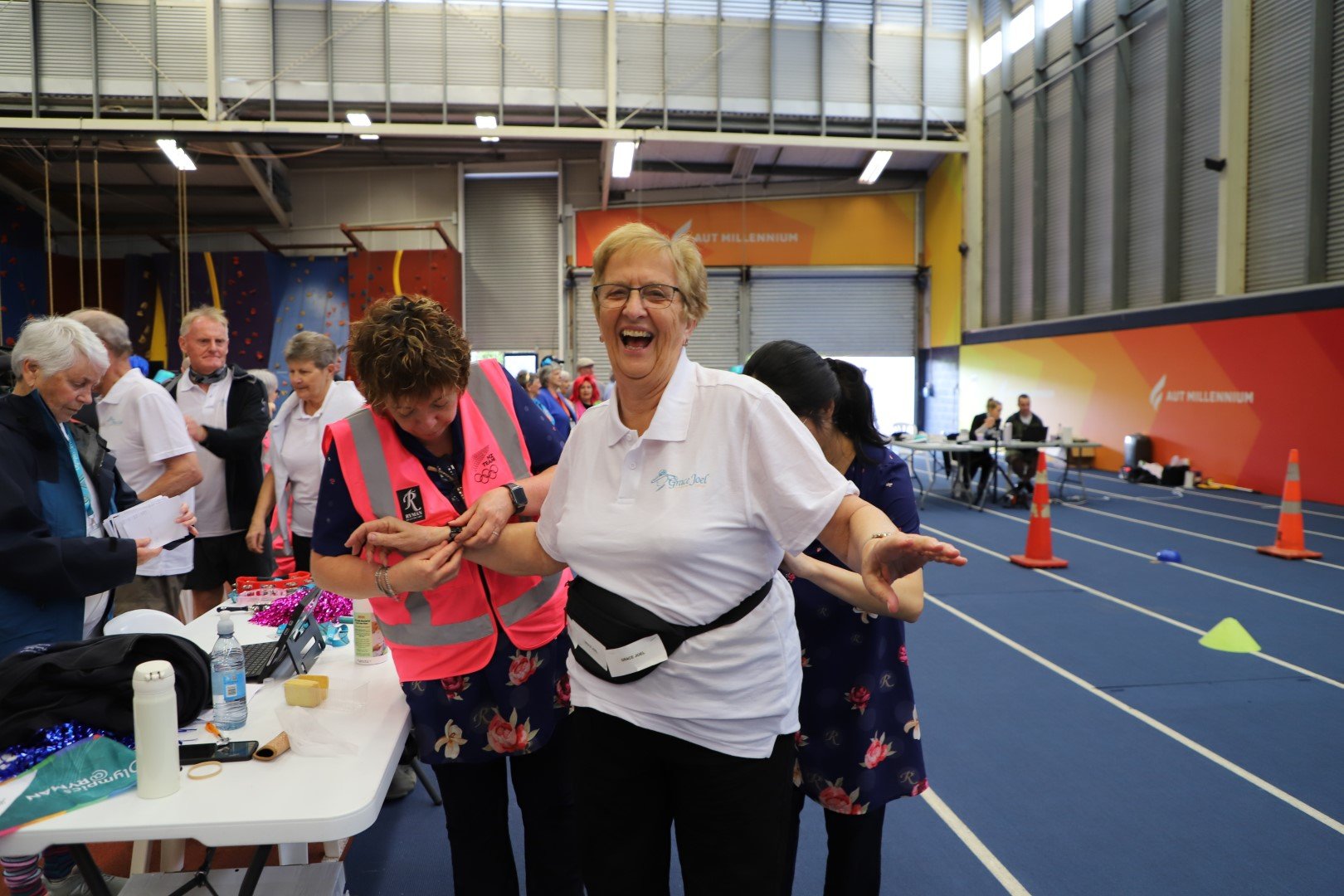 This process would vary in speed and could be a little fiddly but no major hold-ups occurred and the next walker was quickly on their way.
The other standout team was Edmund Hillary with their middle walkers quickly helping to match up the pace with Bruce McLaren.
Meanwhile, Grace Joel’s team also had a husband and wife duo, Brett and Christine Murray, who were putting off their packing for a six week trip to see their daughter in the Netherlands despite leaving the next day!
Possum Bourne boasted a ladies only team and a very aptly named Viv Fitness taking the number one walker position.
Then there was Murray Halberg which included Kathy Doheide, fresh from the bronze medal win in the lawn bowls final at the weekend and still prepared to go the distance for the Lynfield village.
“I have put a few steps in recently,” she grinned between laps.
Proving they are absolutely still gunning for gold were two visitors from the William Sanders team, Eric and Glynne Cockerton, who came along to suss out how it would all play out for their turn tomorrow.
“Anything that gives us the edge,” laughed Eric.
Their village activities coordinator Joanna Legall-Misikini joined them adding, “None of my walkers are allowed any alcohol at happy hour tonight!”
There was a wide range of sporting abilities amongst the walkers, from those who have regularly run marathons to those who just love walking to enjoy exercise and fresh air. 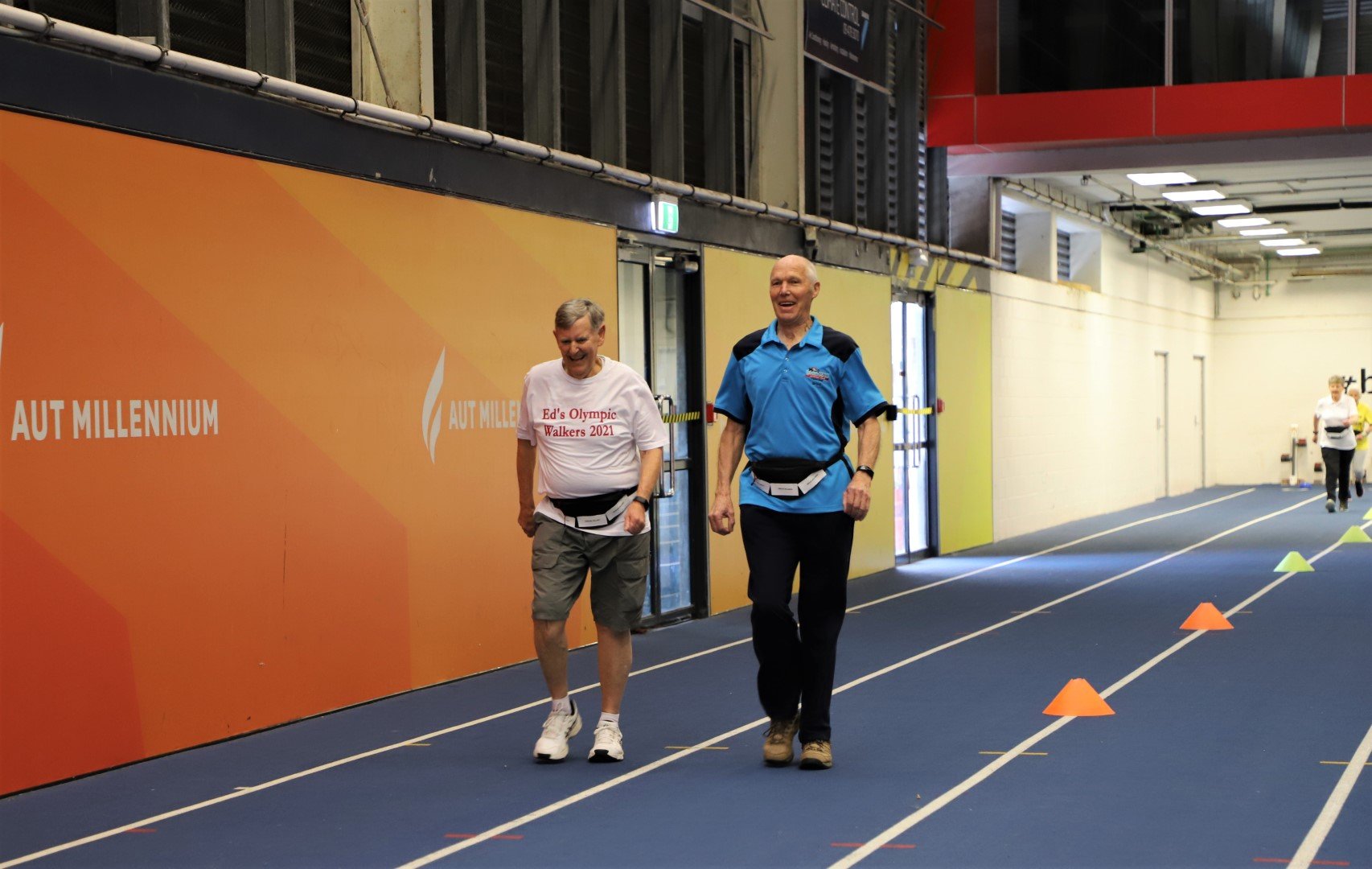 Bruce McLaren walker Herman van Cingel (above right) said taking part in the Olympics@Ryman was ultimately about having fun.
“I have never done any competitive sport in my life. But if they catch up I will try to stop them!” he said.
After nearly three and a half hours of constant walking, Bruce McLaren were declared the winners of the day, with Edmund Hillary and Grace Joel next in line. 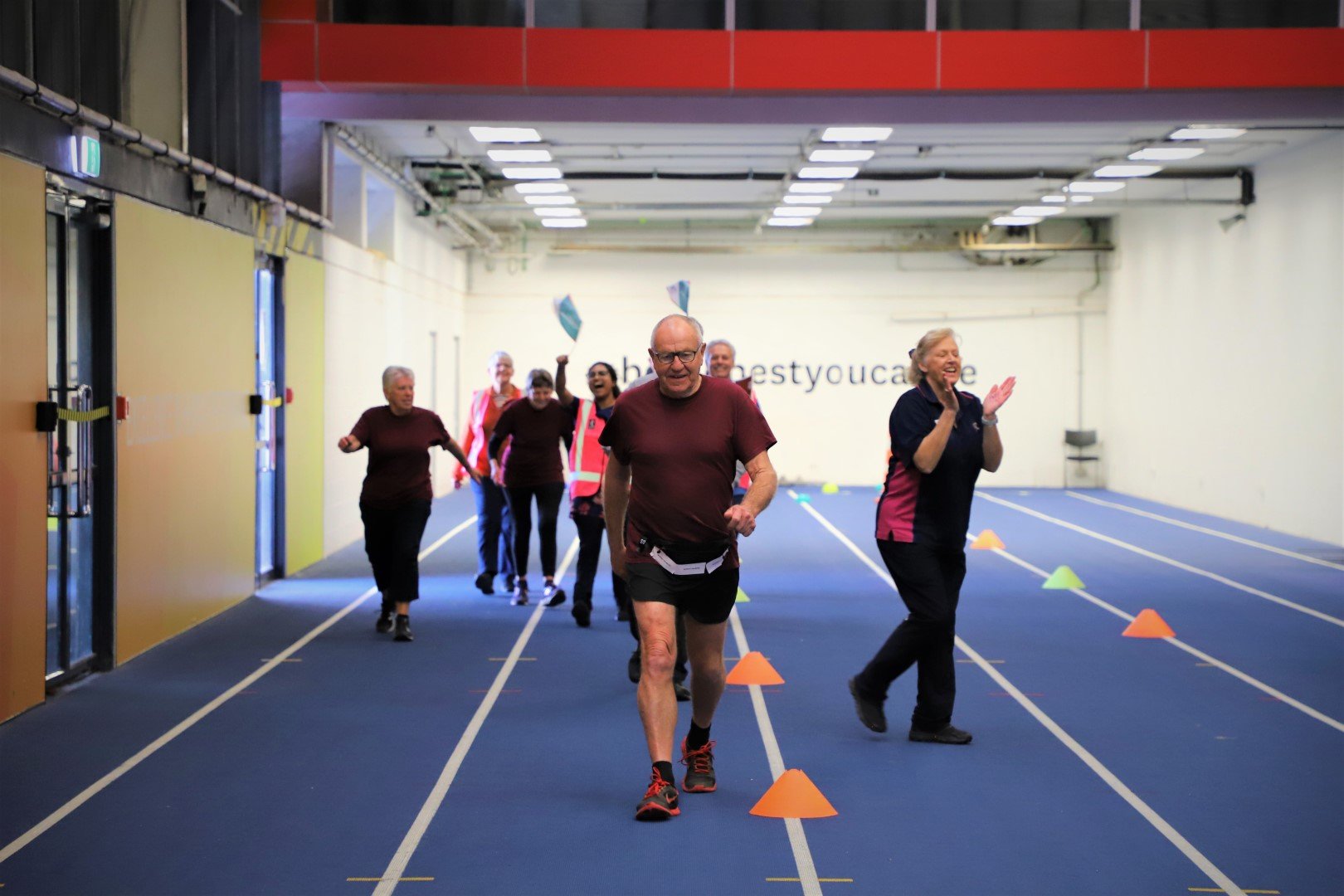 A heartwarming moment occurred when Murray Halberg’s Doug Shadbolt, by this point the only remaining walker on the circuit, was joined by Possum Bourne van driver Gail McGuinness and the rest of the Murray Halberg team and support crew to complete the final lap.
The teams’ times will be tallied up after the final group of villages complete their walks tomorrow (Friday 30 July) which will then enable the gold, silver and bronze medal winners to be announced. 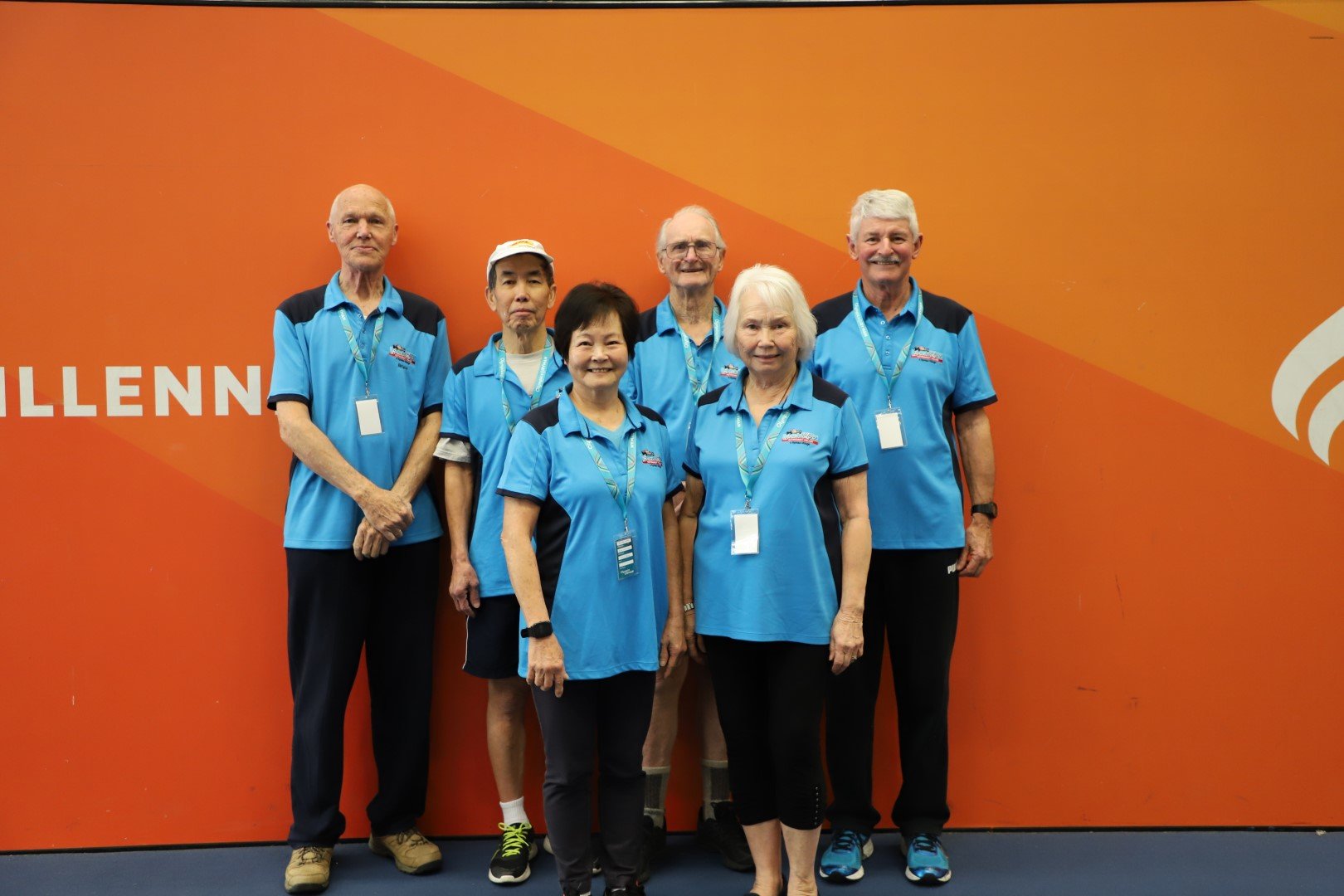 The winners of today's heats