A fairy tale day with the ballet

Audrey’s love for dancing has not dimmed and at 85 years old she still dances whenever she can.

“I started dancing when I was four and haven’t really stopped since then,” Audrey laughs.

Audrey was part of Ryman Healthcare’s Pioneers Campaign earlier this year which took a different tack on expectations about retirement life.

The ad showed the true spirit and dignity of our residents and Audrey’s lifelong love affair with dancing featured strongly.

Audrey can well remember the first time she saw the Royal New Zealand Ballet (RNZB) perform and has closely followed the artistic directors over the years.

“It’s (ballet) just been a part of my life. The biggest change in the company over the years has been the technique of the dancers. The difficulty just keeps going up and it’s a much larger company now.”

The RNZB was formed in 1953 by Danish Royal Ballet Principal Dancer Poul Gnatt and is based in Wellington. Ryman Healthcare is a sponsor of the RNZB and this year’s Christmas performance is The Sleeping Beauty.

Audrey and her daughter, Wendy Burton, were there on opening night in Christchurch’s Isaac Theatre Royal.

“I had tears, it was just so beautiful. Just lovely,” says Audrey.

“Mum and I come to every show,” says Wendy.

“It doesn’t matter if it is contemporary or classic. We love it all.”

Audrey and Wendy not only attended the opening performance, they were also invited as special guests of the RNZB for a backstage tour as Audrey is planning a ballet performance at the village early next year.

She is very excited as she is designing the costumes herself, and so the costume department was a real highlight!

Touring Wardrobe Master Alison Roigard showed Audrey and Wendy the intricacies of prepping for a show, how the costumes were sorted and how it works behind the scenes during a show.

“We have roughly 330 costumes, but for this show we only have two quick changes which is tricky,” Alison said.

“The Queen is especially tricky, and we need to be quick! The costumes have a lot of hooks and you need to muscle your way through it!”

Asked if they get nervous helping the dancers, Alison laughs and says that its mostly muscle memory and being focussed.

Audrey’s favourite costume was for Carabosse – a dramatic black sparkly costume with a long train at the back. This was closely followed by Aurora’s pink costume with beautifully embroidered flowers.

Next up the mother and daughter were delighted to observe company class onstage, seated at the front of the auditorium.

“It was fascinating!” quipped Wendy.

However, the day did not end there. Audrey and Wendy also got to meet Ryman-sponsored dancer Madeleine Graham. Madeleine and Audrey shared stories of their dancing and performances and Madeleine shared back-stage titbits and tales.

The action-packed day concluded with a school performance which Audrey and Wendy loved.

Although Audrey has never danced in The Sleeping Beauty she did perform once in The Nutcracker. Both of these ballets were composed by Piotr Ilych Tchaikovsky of Russia.

“I so much wanted to be the Sugar Plum Fairy but I’m short, so I ended up dancing Clara,” giggles Audrey.

And with that the curtain closed on a magical day. 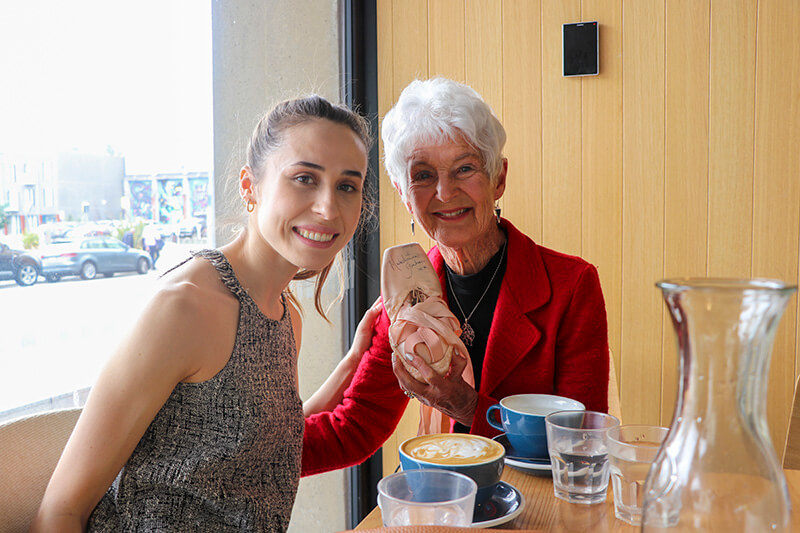