​​​​​​​As Brian Stedman approaches his 101st birthday he looks back on his life journey including military service in the remote tropics during World War II.

He has memories of flying over the Pacific Ocean as the Allied troops made forays between the islands during the battles against the Japanese. The air was heavy and humid, and the action continuous.

Brian wasn’t a pilot but rather a meteorologist, making sure the conditions were favourable to allow the bombers and following fighter planes to get safely to their destination and back.

His service during an always dangerous war was not surprising given his family background.

He was born and raised in Greymouth, on the West Coast, but around the age of four the family moved to Christchurch.

Brian’s early education was at Waimairi Primary School. Later, due to ill health during the South Island winters, his parents decided to send him to boarding school at Nelson College, although he was often back in Christchurch. Brian lived in the same Perry St, Papanui house for 87 years  until he moved into Margaret Stoddart Retirement Village in 2013.

In his early days, with his encouragement from his father Maurice, he joined the Territorials. His father had a role as camp commandant at Burnham, and Brian’s Territorials training sessions, before the outbreak of World War II, took place in and around Christchurch.

At university, he concentrated on mathematics, physics, and chemistry, and completed a bachelor’s degree. In 1942, he transferred from the Territorials to the New Zealand Royal Airforce. He started as an airman and began his training in meteorology. While learning the basics he visited various bases including Harewood, Wigram, Wellington and RNZAF Station Waipapakauri, north of Kaitaia.

In the North Island, he heard talk of German surface raiders, that were essentially merchant or cargo vessels outfitted with guns. He remembers war wreckage located along 90 Mile Beach. He also has wonderful memories of visiting Spirits Bay and recalling how it is known as a sacred place in Māori culture. The memories are precious to someone who has spent many years in the South Island. 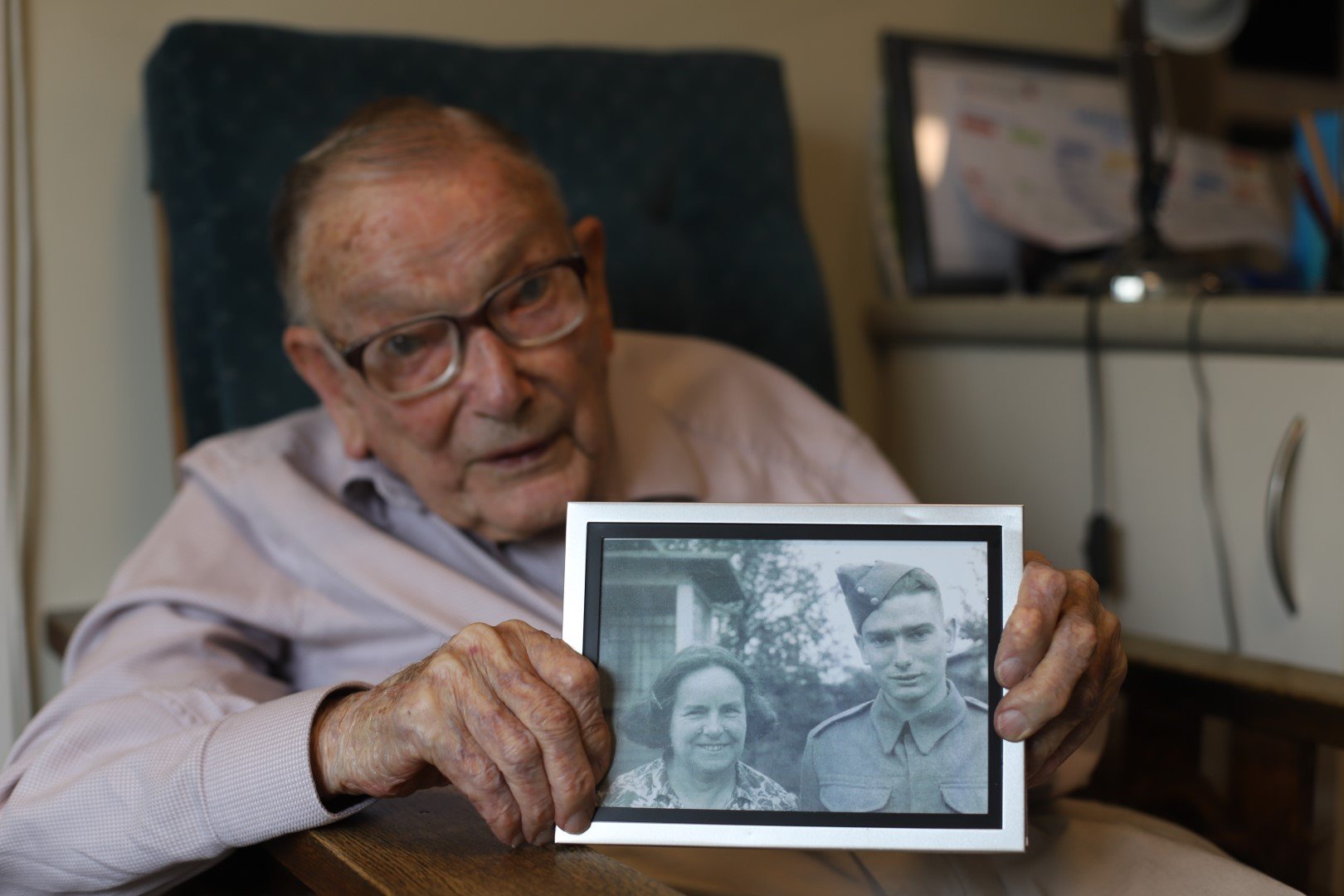 One lovely item Brian has on his desk at his Margaret Stoddart home is a photo of himself and his mother, May. Brian never married and since he is without siblings he has no immediate family members to call on. Rather, it is the residents and staff of the village that are now his family.

His Pacific wartime memories are strong. He was part of a station personnel on the islands, and was the squadron’s weather observer. He also flew on occasion as part of a bomber reconnaissance group.

By this time Brian was a commissioned officer, and at the start of his Pacific travels. The bombers would fly in clearer weather to help those manning the fighter planes.

Initially he was based at Guadacanal, part of the Solomon Islands. Guadacanal had been the location of bloody fights between the Allied forces, including US Marines, and Japan. Brian says by the time he arrived in the Solomons the Allied forces were pushing forwards to the Marshall Islands.

From Guadacanal he would be on board bombers as they flew north or south to help with weather predictions for Allied aircraft manoeuvres in and out of Pacific airfields. Those destinations included Bougainville, Vanuatu, and Noumea/New Caledonia. He remembers an electrical storm causing one flight cancellation.

The Lockheed Hudson or Ventura bomber aircraft and Corsair fighter planes would fly in formation, he remembers.

“The bomber planes had navigators on board, so they could do the long ocean flights, but when it came to the fighters they would equip them with an extra droptank (for fuel) which they put underneath the fuselage in between the legs of the undercarriage.”

On one formation flight southwest to Vanuatu, he witnessed a fighter pilot having trouble with aircraft hydraulics. Eventually the pilot, who had flown close enough to the island to be rescued, had to bail out. The pilot was fished out of the sea by a RNZAF Catalina flying boat team.

“He bailed out over the sea. By this time, of course, the Catalina was in the air and picked him up… all the pilots would have air-sea rescue gear on, automatically. We didn’t see the plane hit the water, but a colossal cloud of black smoke went up just for a few seconds.”

He later moved across to the nearby Florida Island and eventually to Manus Island to the north of the island of New Guinea. Manus, part of the Admiralty Islands, had been occupied by the Japanese from late 1942 but US troops re-occupied it in early 1944.

He was on Guadacanal for VE Day, then on Florida Island for VJ Day, where there were victory celebrations. “There were more fun and games. The sergeants managed to burn their toilet block down, but once again (overall) it was very restrained.”

He stayed on Manus Island, and then Bougainville until he was repatriated via the troopship TSS Wahine to Auckland, New Zealand. The return trip saw a break from the ‘wartime footing’. “When we went back on the Wahine and went down for our first meal, in the dining room… the staff there of course were all there in civilian clothing. It was quite a big shift in culture.”

Back in Christchurch he finished a Master’s degree and eventually worked for most of his career for the NZ Refrigerating Company. He worked in the laboratory of the company’s Islington works, retiring in 1984. Brian also enjoyed playing tennis at the Hagley Park-based United Lawn Tennis Club. He turns 101 on December 26.