With sport dominating most of her life, it was no surprise that Hilda Ross resident Sue Cargo was up for the challenge when invited to join the village’s relay walking team as part of the Olympics@Ryman.
The 91-year-old was still playing tennis well into her late 80s and only hung up her tennis racquet for good when she moved into the Hamilton village three years ago.
“I was a PE teacher so I love that sort of thing,” says Sue, who is committed to her daily walks.
“I like to do the exercises with the group here at the village too.”

When her fellow residents began signing up for the different events going on for the Olympics@Ryman, Activities Coordinator and Village Champion Sandra Berridge asked Sue if she would join in the relay walking team.
Luckily, Sue said yes, and in so doing became the only serviced apartment resident at Hilda Ross to join in an activity and also the second oldest resident in the entire Olympics@Ryman competition.
Crucially, says Sandra: “Without Sue we couldn’t have had a team.”
The team travelled out to the Avanti Stadium in Cambridge for the 21.6km walk, along with teams from sister Hamilton village Linda Jones and Tauranga village Bob Owens.

Each individual took turns to walk 1.2km three times to make up the total distance and between each of their three turns would have to strap on a fitbit and a special bumbag that would scan the lap reader on the way past.
Sue said it didn’t take her long to get into the swing of it.
“I do a lot of walking here around the village in the mornings and evenings – I think it’s important to stay fit.”
She was also surprised to be the second oldest resident taking part in the competition.
“I don’t feel old because I’m looked after here,” she said.
Sandra said Sue was the sixth walker of the team.
“We saved the best ‘til last!” she said.
“We all got up and walked the final lap with her- it was great team spirit on display!” 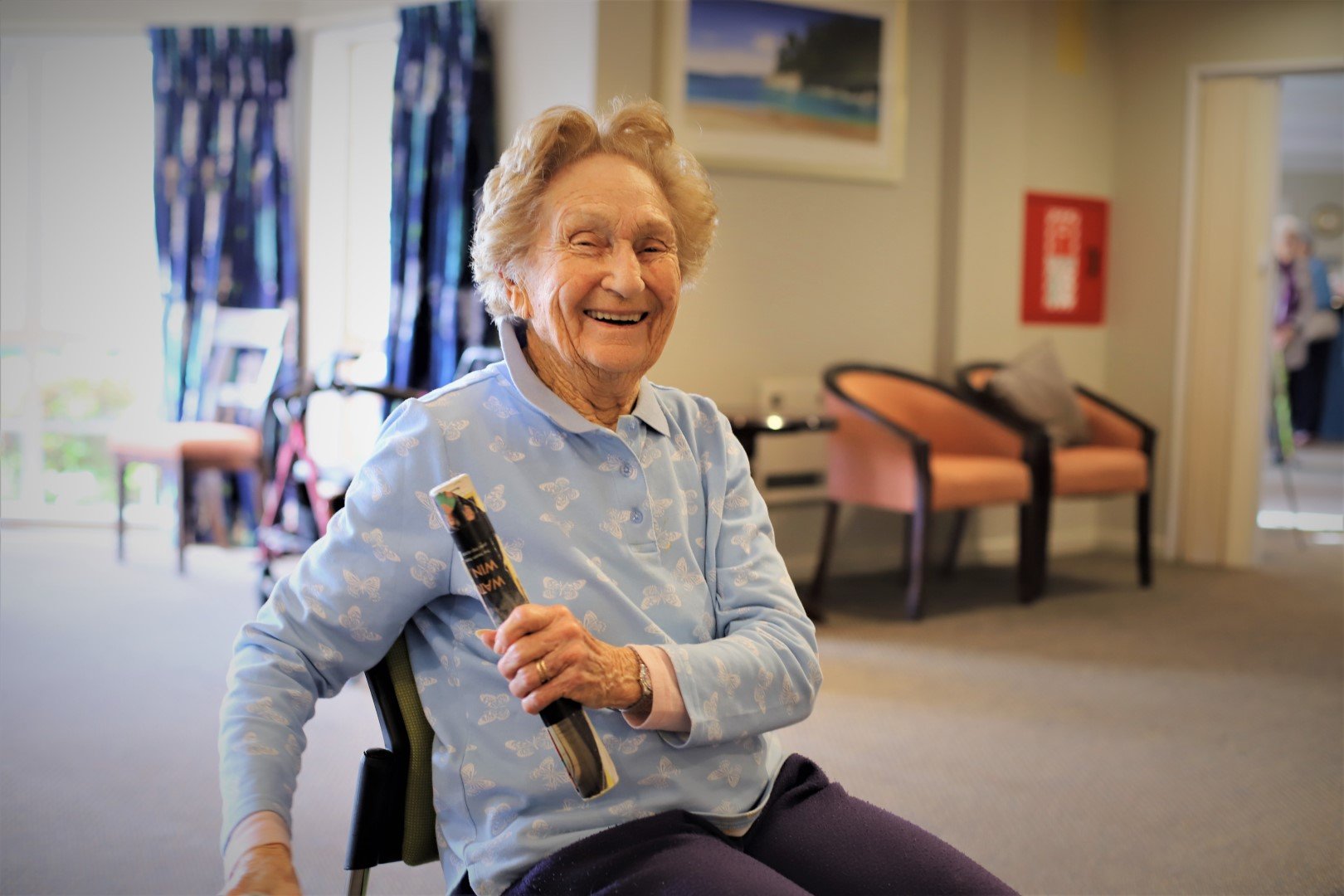 Sue loves doing the Triple A exercise classes at the village

Sue puts her ability to rise to this latest sporting challenge to her commitment to regular exercise.
In her youth she taught swimming and life saving but it was tennis where she really showed impressive skills.
“It’s a challenge,” she says of tennis. “You’ve got to learn the skills and you’ve got to be fit and you’ve got to have a good brain.
“And I liked the socialising side of it too.” 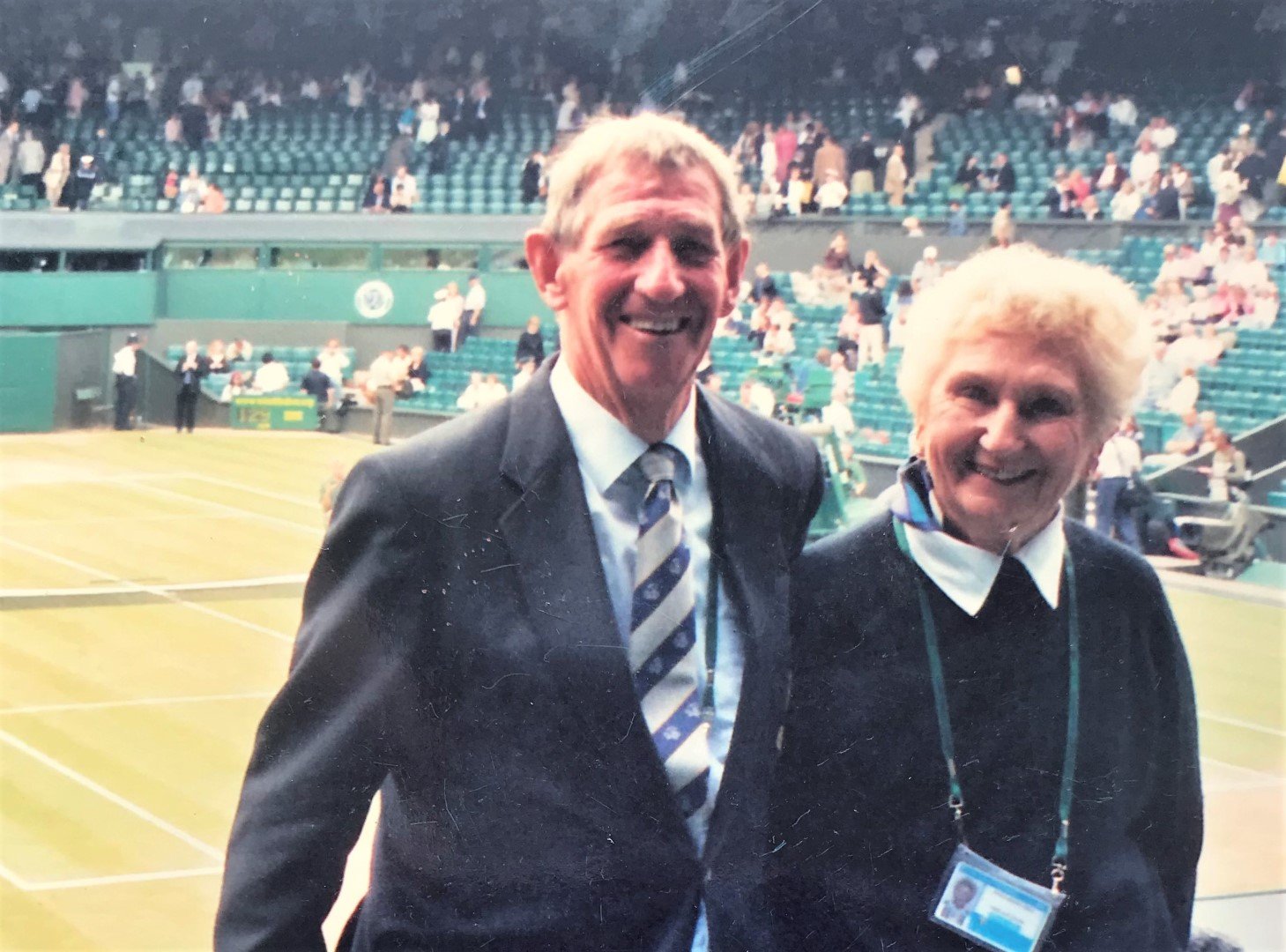 Sue and Malcolm were hosted at Wimbledon in 2005

Indeed, Sue and her late husband Malcolm and their four sons all played tennis and were well known on the tennis scene, with Malcom being President of New Zealand Tennis from 2003-2006.
Because of this the couple were hosted at Wimbledon’s Centre Court in 2005. They got the chance to speak to the men’s and women’s champions, Roger Federer and Venus Williams at the Champions Ball at the end of the competition.
She racked up an impressive list of wins and overseas travel to competitions in her later years, including coming 2nd in the women’s 70+ in the World Team Champs in Melbourne (2001) and 3rd in the same category in Philadelphia (2004).

She also won the NZ National Senior Champs in the singles 65+ category in 1997 and 70+ category I 2000 and 2001 and was invited to play in Austria for an international team of 70+ women against Europe.
A special highlight as far as Sue’s proud son Jason is concerned is that as well as numerous singles titles, his parents won several titles at mixed doubles playing together in the national seniors, something quite rare for a married couple.
“It can put a lot of pressure on a couple when competing at this level but probably because Mum is a very good player, they were a strong combination,” he said.