Special stopover for The Mace tour at Rita Angus village

It was an emotional but thrilling day for former New Zealand cricketer Trevor McMahon (91) when New Zealand Cricket representatives visited his home at Rita Angus Retirement Village in Kilbirnie, bringing with them the prestigious ICC World Test Championship trophy. 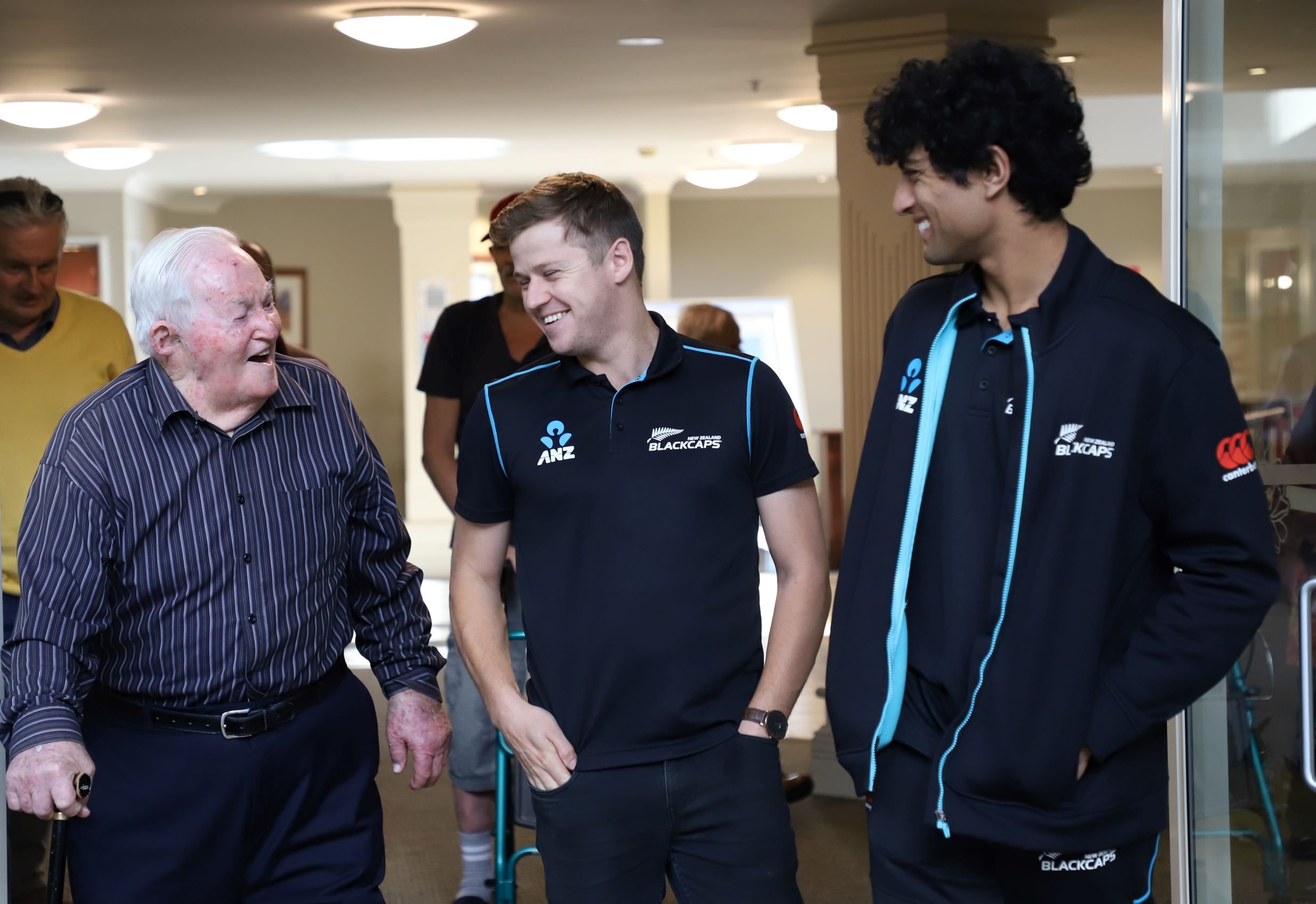 The Mace, won by the Blackcaps in the final against India at Southampton in June, is currently on a tour of New Zealand but had a more personal stop-over at the village in Wellington to visit McMahon.
Trevor (TG) McMahon, New Zealand’s oldest living test cricketer went on the 1955/56 tour of India and Pakistan and recalled some of his memories of that time with cricketers Rachin Ravindra, Blackcaps assistant coach and former NZ wicketkeeper, Luke Ronchi and NZC’s Willy Nicholls plus the crowd of residents who shared the visit with him. 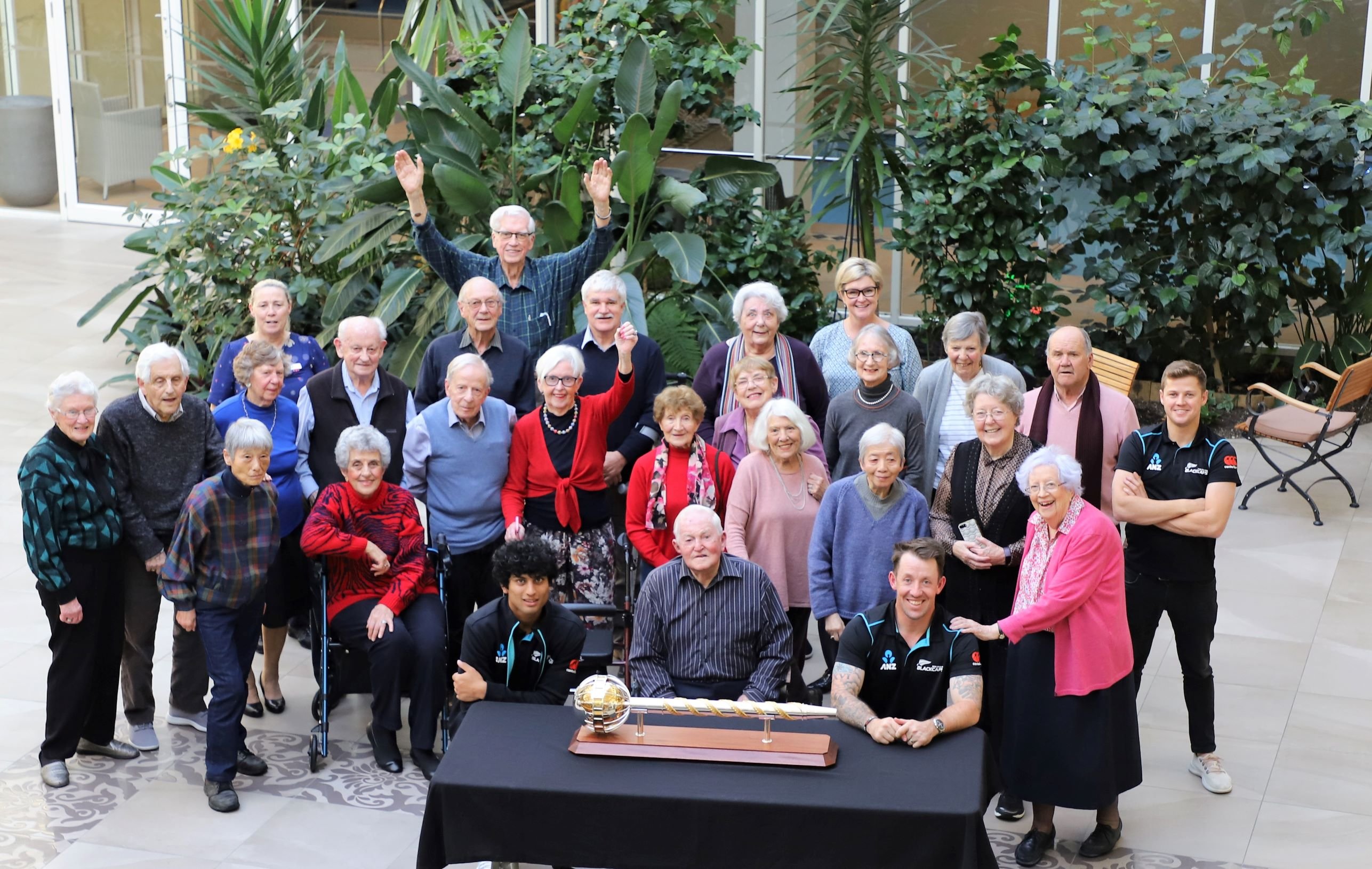 The New Zealand cricket team who went on the tour of India and Pakistan in 1955 were the first team to visit the subcontinent and the first to travel by plane.
After flying to Sydney, they boarded a Super Constellation which had four piston engines. It took three days to get to India, refueling in Darwin, Jakarta, Bangkok and Singapore where they stayed the night in Raffles Hotel.
However, arriving in Karachi was a totally different experience for the team. The different culture and climate proved challenging at times.
“The team had a lot of stomach troubles.” said McMahon who recalled fast bowler John Hayes coming in to bowl, then continuing to run past the batsmen at both ends, past McMahon wicketkeeping and off the field straight into the bathrooms!
There were no independent umpires, so McMahon, said it was very difficult for an umpire to make a decision against their own team in front of a home crowd.
“In Pakistan we played on coconut matting wickets, over grass but sometimes over concrete. If Pakistan were batting, they tightened it to make it easier to bat on, and if we were batting, they loosened it to help their spinners! He laughs. “We put up with it.”
“As were the first team to go to India and Pakistan they wanted to meet the NZ cricketers, so we had a lot of social engagements. The last 30 days in India we had 34 official functions – it was tiring.
“There’s only three of us left from that tour now. Me, Jack Alabaster and John Guy.”
On returning home to New Zealand, Trevor married two days later.
Eyeing the Mace, Trevor comments, “It’s a very handsome trophy.” It’s heavy too weighing in at almost 10kg.
Trevor had to wear gloves to hold the Mace - quite different to the gloves he wore back in the day. Still he manages to squeeze his wide wicket-keeper's hands into the small white conservator’s gloves. 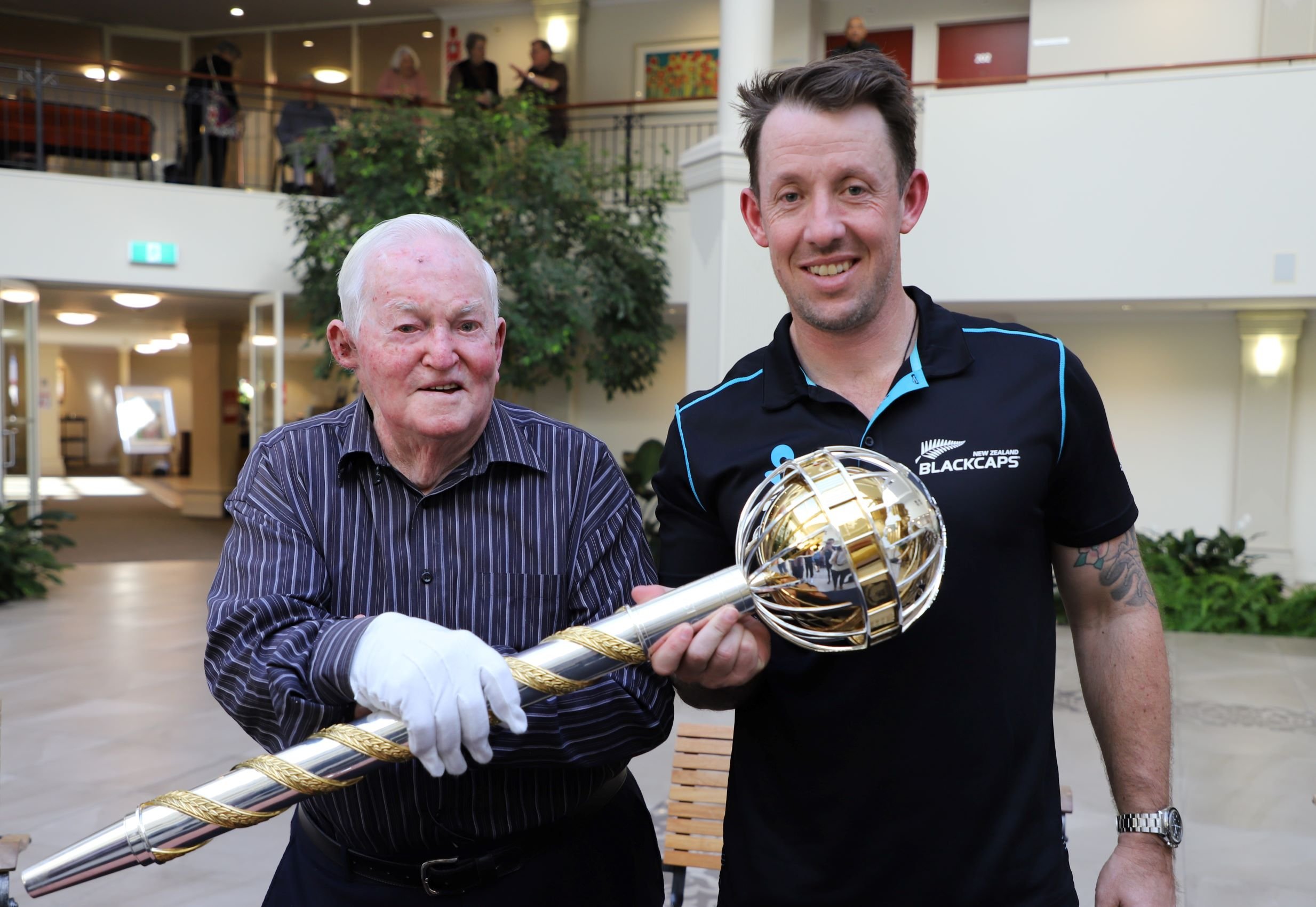 The Mace is a work of art, designed in the UK by Thomas Lyte. The impressive silver and gold handle is crafted to resemble a cricket stump and the top designed like a cricket ball with engravings that show the reach of cricket across the globe.
Trevor is delighted he could share the day with the residents of the village who are immensely proud of him. “It’s been like a reunion today. Bryan [Waddle] and I played club cricket together.

“I loved ‘keeping’, as you’re always in the game.”
And his thoughts on the current Blackcaps team? “I agree with Sir Richard Hadlee that without a doubt the present team is our best, all-round team.” 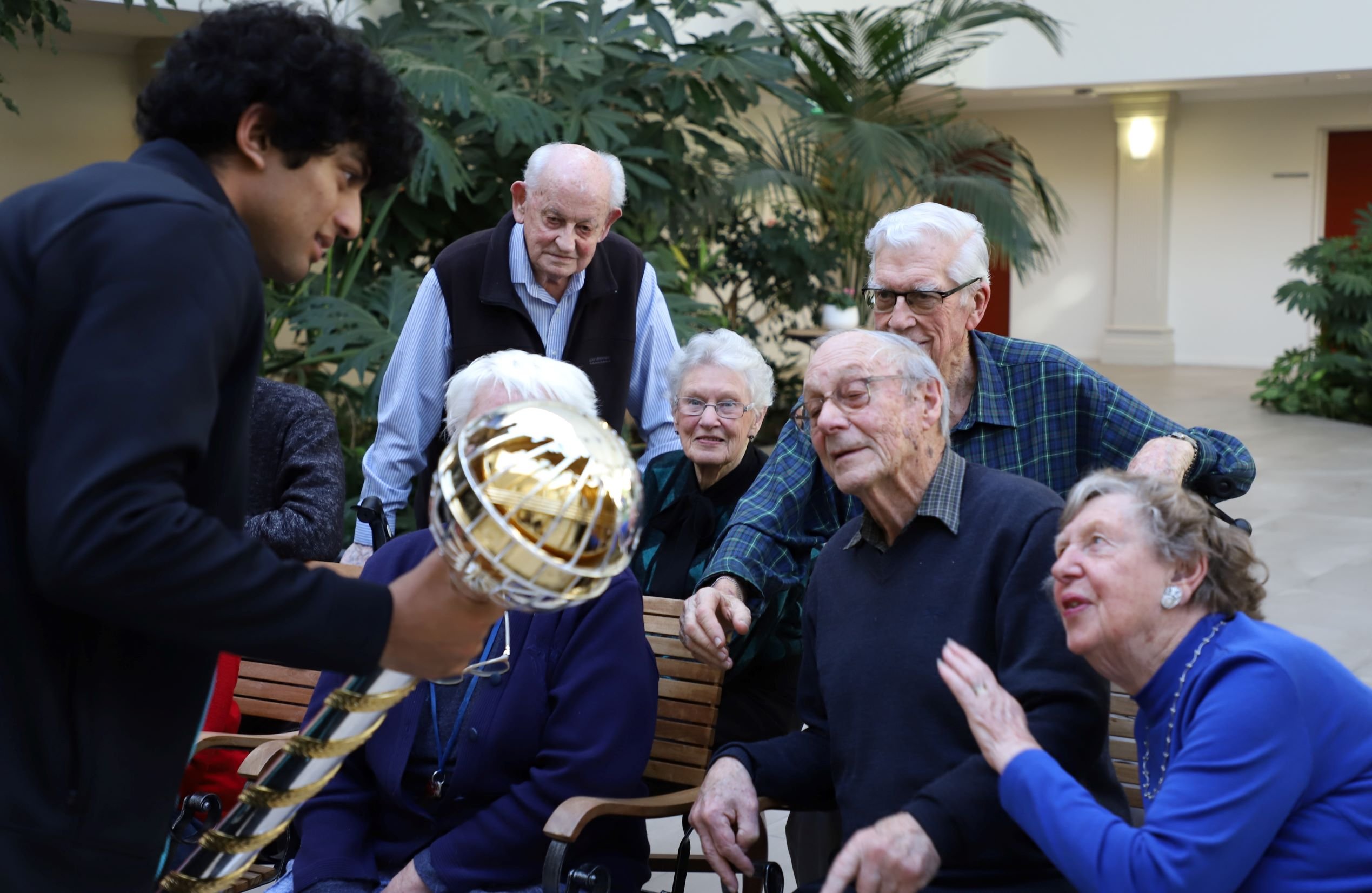