A team of residents from Linda Jones Retirement Village has repeated their success at the annual Hamilton Gardens Scarecrow Festival with a second win in the adults category.
Following on from last year’s winning effigy of the village namesake Linda Jones, the team came up with a Wizard of Oz themed display – and it clearly resonated with the more than 4000 admiring visitors who came through, claiming 357 of the winning votes.
“It was amazing to hear we had won again,” said John Higgins.
Added organiser Pam Hide: “We had a lot of fun!”

The display’s main feature is the Tin Man, who is accompanied by a two dimensional Cowardly Lion, both standing on the yellow brick road next to Dorothy’s ruby slippers.
From inception to putting it on display the process took about six weeks and was a real team effort.
Pam, who used to volunteer at the Hamilton Gardens, was the main motivator who got the rest of the team organised.
John Higgins had the original idea and the other team members – Allan Reading, Bob Clarke, Carl Rofe, Wally Roberts, Owen Henderson and Howard McNally – designated themselves to getting the various materials and completing various tasks.
Said former aircraft engineer Carl: “I had just finished laying the floor in my garage and had some material left over. We painted it yellow and it came up really bright and colourful.”
For the Tin Man, Allan came up with the pipework, Howard tapped up some former roofing colleagues to source some ducting, and Wally cut up the arms while for the Cowardly Lion John cut the outline out on plywood while Owen’s granddaughter painted the details on.
Dorothy’s ruby slippers were an old second hand pair of black shoes which were painted white and decorated with red sequins from Spotlight.
“We made sure we screwed them down hard because they would have been easy to walk off with!” said John. 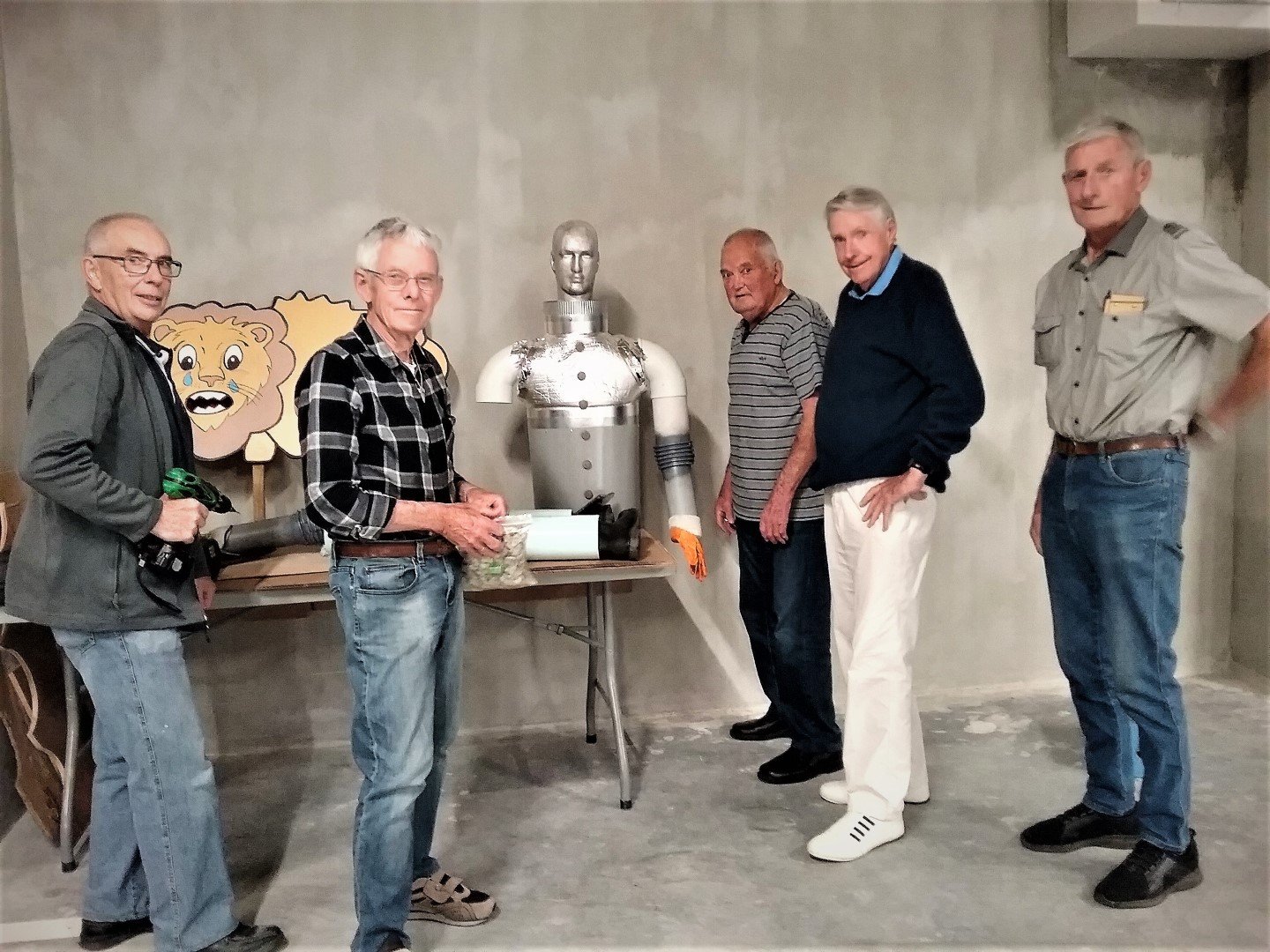 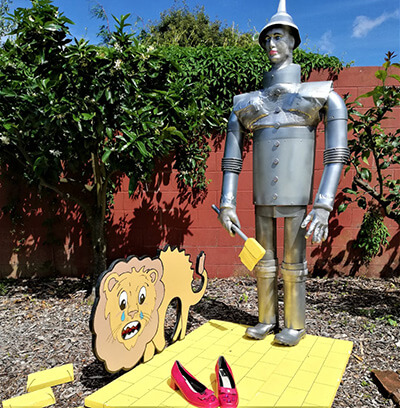 Allan went to the Hamilton Gardens to look at the display in situ and admits he put all four of his voting buttons into the box for their display, much to the surprise of a young boy nearby.
“He asked me why I was doing that and I replied ‘Because it’s the best!” he laughed.
The group recall how the display nearly didn’t happen at all after the Tin Man suffered a mishap in the car park during construction.
“We found him sprawled across the basement one morning with a sunken chest,” says John. “He had suffered a wee hit and run!”
They were able to fix him up and the experience gave the team an idea for next year’s entry.
“We might have to do the man from Operation!” said Pam. 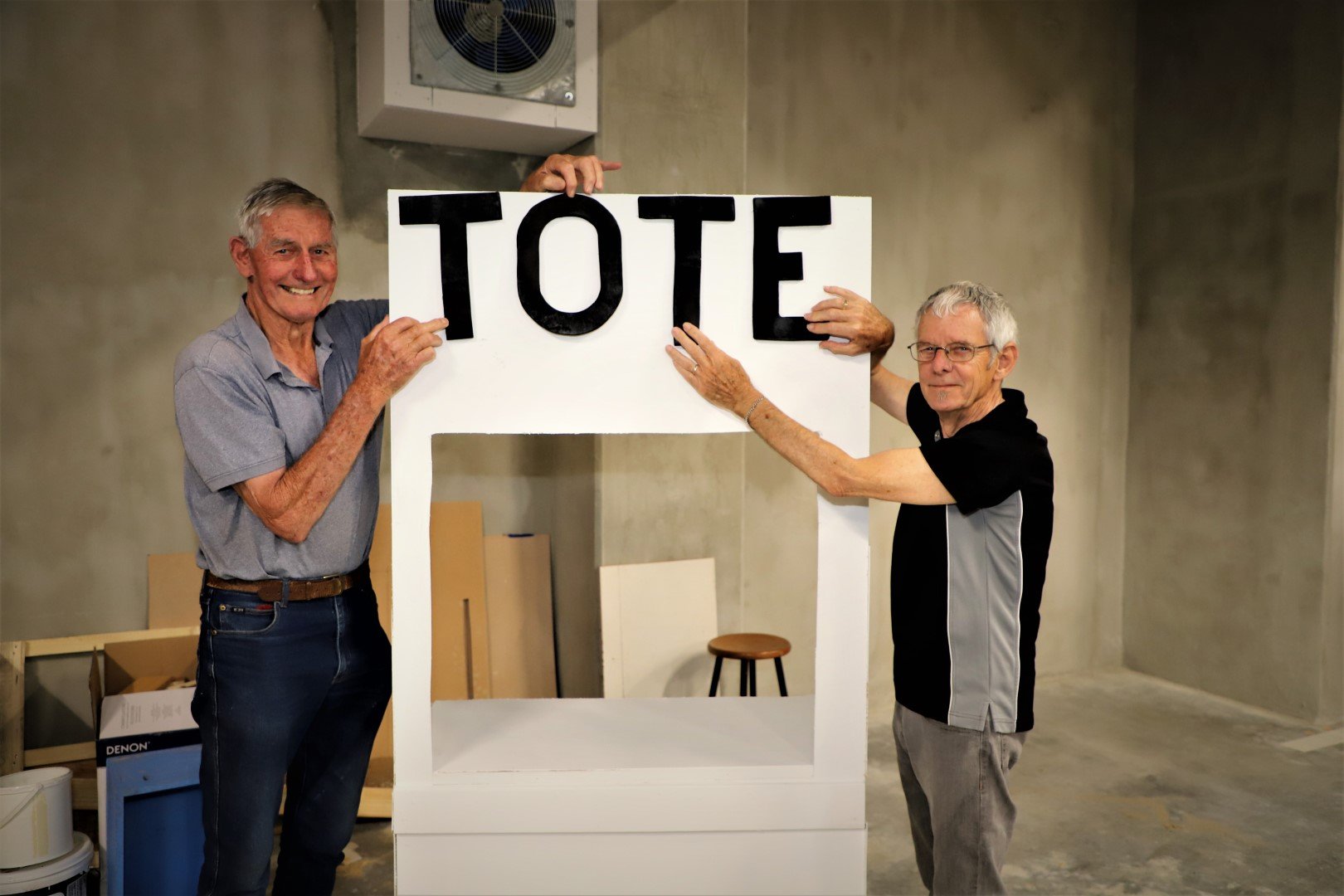 Bob Clarke (left) and Carl Rofe with their latest creation

The men, who between them boast a range backgrounds in carpentry, farming, electrical, cabinet making and engineering, have since made a tote booth for their Melbourne Cup night and are counting down the days until the village centre opens up with one particular area set to be their favourite hang-out.
Said John: “We’re setting up for the men’s shed which will be opened soon so I’m getting a list of everyone’s specialities in preparation.
“It will be great being able to do projects like this in that space, we can’t wait.”