When Ryman IT worker Paula Fa’aoso heard the terrifying news of the massive underwater eruption in Tonga on 15 January, his thoughts immediately turned to his family back home.
Not only was there the eruption of the Hunga-Tonga-Hunga-Ha’apai volcano which left volcanic ash blanketing the islands, but also a huge tsunami wave which later reports revealed had caused the death of three people, flattened coastal buildings, and knocked out vital communications to the rest of the world.
“I called my family straightaway while the eruption was going on. We were worried about a tsunami so I asked my mum and dad to go to my wife’s auntie’s place which is on higher ground,” he said.

Paula’s parents live in the downtown area of Tonga capital Nuku’alofa, just 5km from the shoreline, and his Dad can often be found down at the church right on the beach.
As they were on the video call a huge bang could be heard and then the sky turned dark as rock and ash began to rain down.
“My mum was so scared so she went to pick my Dad up and the waves were chasing them!” 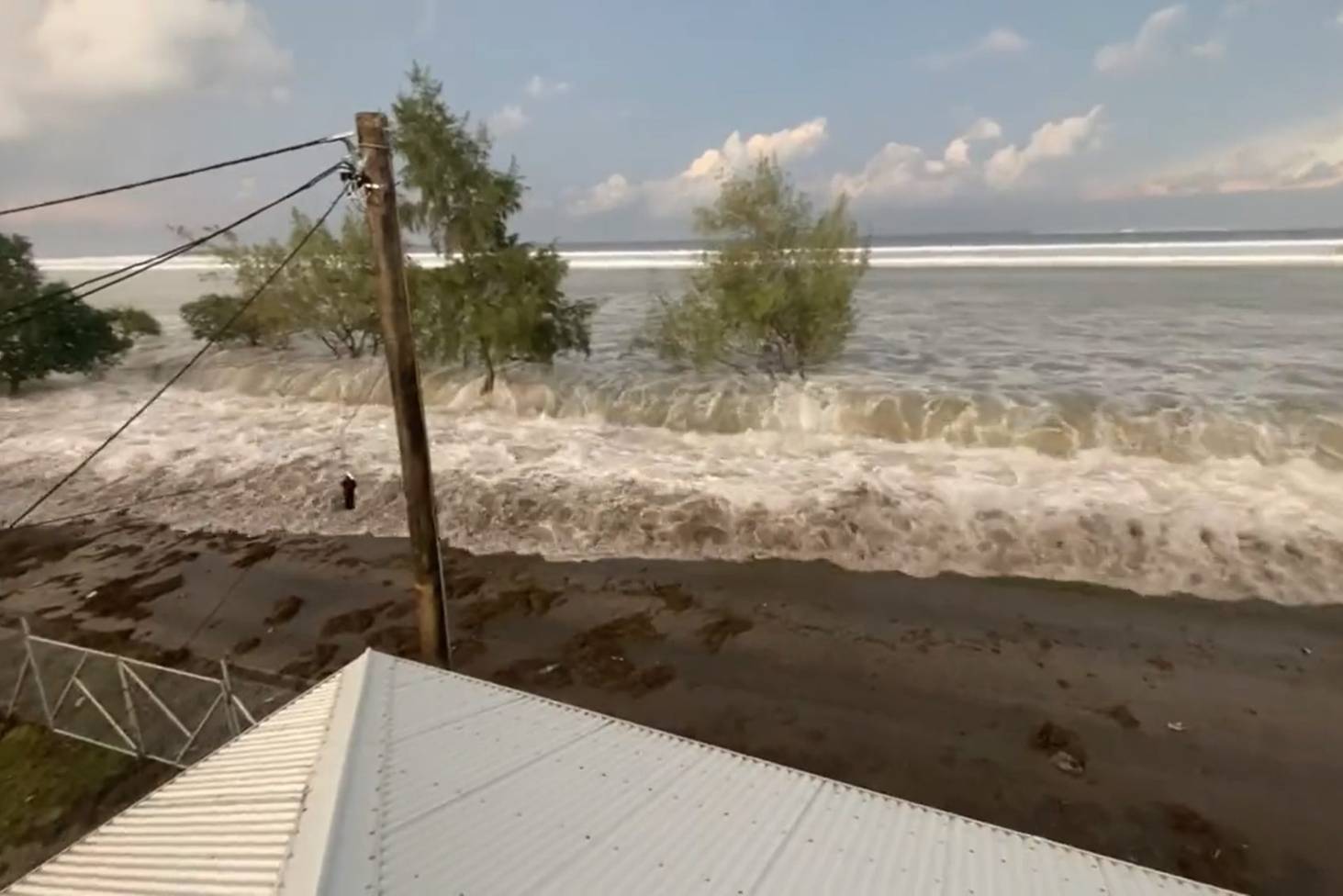 The tsunami wave which struck following the massive eruption.

Paula admits it was incredibly scary listening to the events unfolding so far away, helpless to do anything, but then all communications suddenly cut out leaving him desperately worried for their safety.
“Normally we call every night,” says Paula, the second oldest of five siblings whose three children are the first grandchildren in the family. His two older children even stayed with his parents in Tonga for a few months when baby Eniketi arrived.
“We were sending messages and calling, calling, but nothing was getting through. It was hard to hide how worried I was while I was at work.”
It turned into an agonising five-day wait until he finally got word that his family was safe.
“It was a huge relief when we finally made contact. They are all okay, there was just some damage to the house.”
Despite being unsure of the situation back home, the Tongan community in New Zealand began rallying together to get supplies to send back, filling containers full of essential supplies, and Paula and his wife ‘Alaisia were no exception. 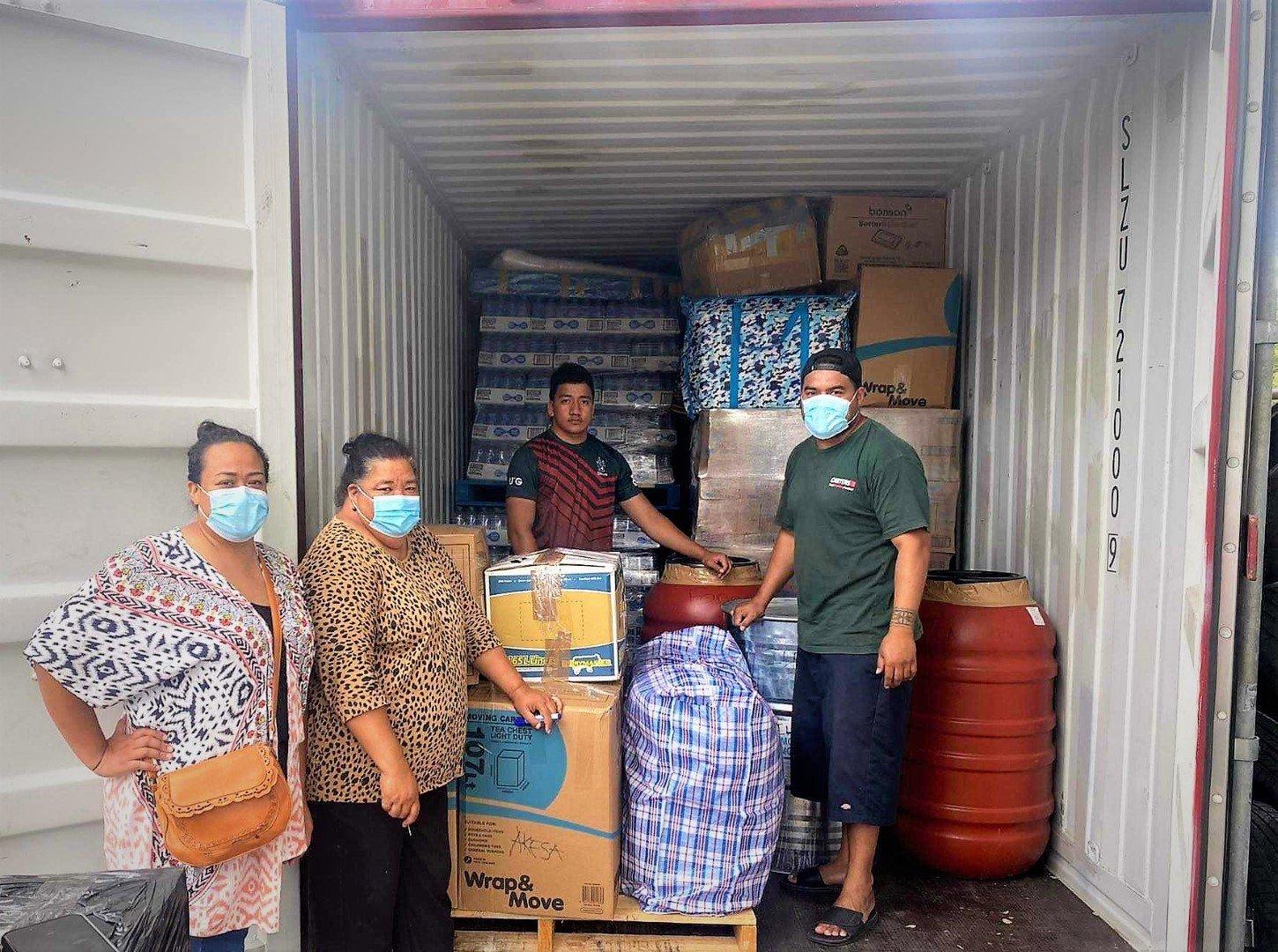 Paula (right) pictured loading up supplies in the container, along with (from left) his wife 'Alaisia, her auntie 'Akesia Halatanu and 'Akesia's son.

Ryman Healthcare offered to contribute 10,000 face masks along with hundreds of dollars worth of bottled water and essential pantry staples.
Ryman has also donated the cost of shipping a container from Christchurch to Tonga for the Free Wesleyan Church of Tonga.
This donation followed an approach from Ryman Health and Safety Coordinator Natasha Richardson.
Natasha, who also has family affected back home, said the church was very grateful and excited to be able to get going with relief.
“I can’t thank Ryman enough – it means a lot to know that your work family is there to help at times like this.’’
Paula is equally grateful for the help.
“I was so happy, I didn’t know what to say,” said Paula, who has organised a separate container to be sent to Tonga on 2 February along with other donations of food, water and clothing they are collecting at their New Lynn home.
‘Akesa Halatanu, who is ‘Alaisia’s auntie who is currently staying with them and also the Matron of Tonga’s 220-bed Vaiola Hospital, said the masks in particular would be a massive help.
She had also been provided with sanitiser, gloves, emergency kits and saline solution from Medical Aid Abroad plus Middlemore and Waitakere Hospital where her sister Lile works as duty manager, but Ryman was the only one to provide crucial masks, she said.
“I was absolutely shocked and so grateful when Paula mentioned that Ryman offered some masks. I can’t thank them enough!
“The ammonia and sulphur is very strong in the air and the ash is making their eyes red and irritated.
“For people like my husband, who is an asthmatic, it is essential that they wear a mask, especially when they are clearing away all the ash.”
It was ‘Akesa’s house that Paula’s mum took refuge in when the tsunami threat emerged.
‘Akesa admitted the long wait of not knowing if everyone was safe was incredibly stressful and worrying.
“It was hard to sleep. My five kids and sister are all here but my husband is at home and I was worried about my team and how they are all coping.”
Out of Tonga’s 169 islands, 36 are inhabited and there are community nursing teams travelling to each of them to check that people are okay.
She is now waiting for word that she can return so that she can help to distribute the containers full of supplies to the people that need it most.
Paula also added a big shoutout to his colleagues in the Ryman technology team who pitched in for their fundraiser to amass almost $1,000 to go towards Tonga relief efforts.