Edmund Hillary residents were thrilled to join a group of legacy Olympians and Commonwealth Games athletes in helping the Queen’s Baton on its four-day journey around New Zealand.
Many got dressed up or waved flags to follow the Baton on a COVID-safe parade around the streets of the village while others waved from outside their townhouses or from their apartment balconies.
Ryman’s very own legacy Olympian, Evelyn Page resident Allan Tong, joined in the fun, travelling down from Orewa.

Allan competed in rowing at the 1956 Melbourne Olympics and sported the original badge on his blazer for the special occasion.
“I’m 91 and it’s a privilege to stand here with these fine athletes now,” he said.
“You guys have been an inspiration to the country at large.” 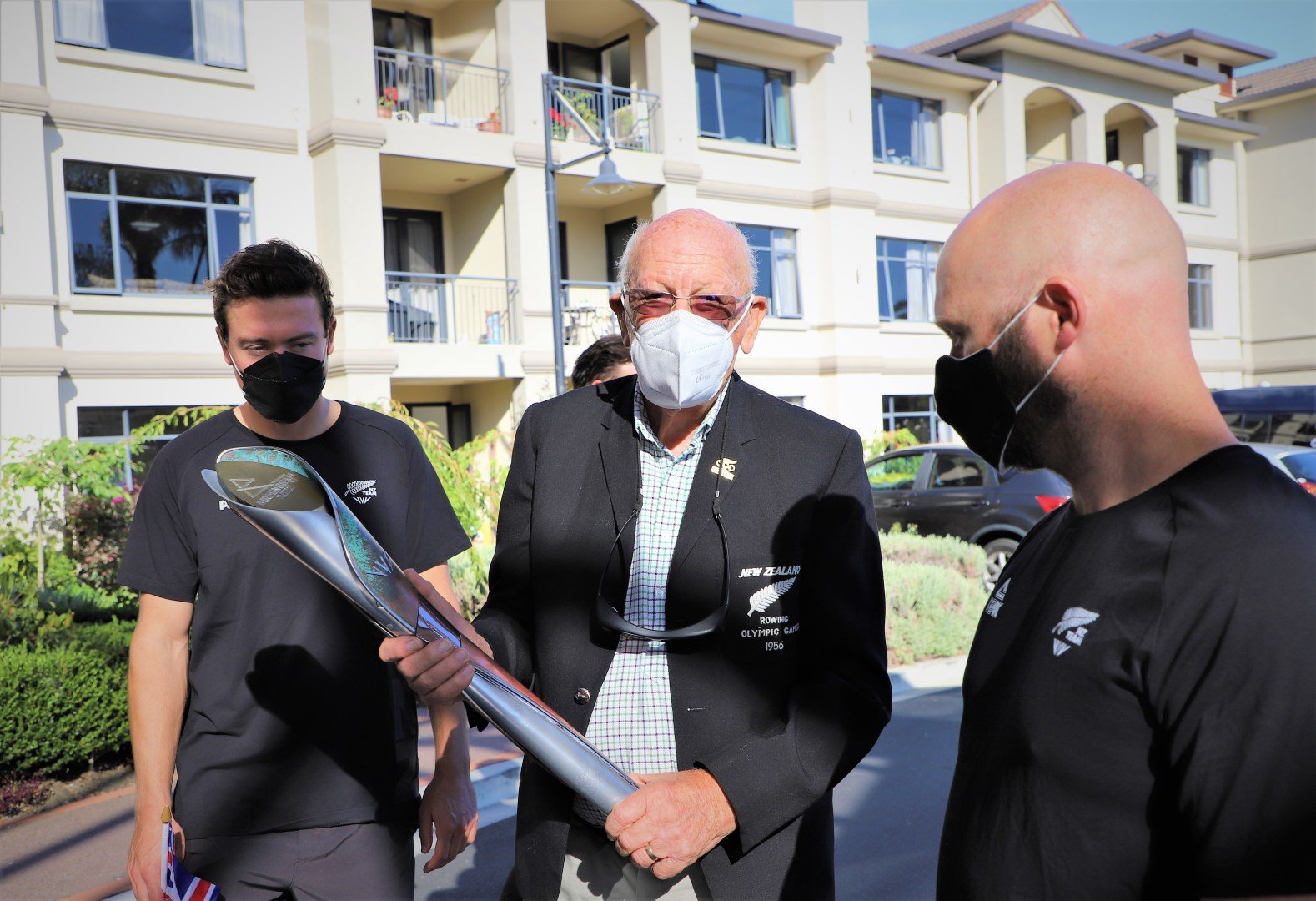 Allan was one of several athletes celebrating the event who represented a range of sports including boxing, weightlifting, track cycling, triathlon and racewalking.
They were, respectively, Alexis Pritchard, Richie Patterson, Ethan Mitchell, Evelyn Williamson and Alana Barber, with all enjoying the great response that the village residents had made.
Notably, Richie has competed in an incredible three Olympic Games and four Commonwealth Games, winning gold at Glasgow in 2014 and silver in Delhi in 2010.
Resident Alex Linn, a former competitive runner, took part in the 1990 Queen’s Baton Relay when New Zealand last hosted the Games.

He wore his original shirt from 1990, with many impressed that he had held onto it for so long.
“My wife Shona should get the credit for that!” said Alex, who still walks every day to stay fit.
The Queen’s Baton Relay is a relay held in all 72 nations and territories of the Commonwealth and helps to build up excitement for the Commonwealth Games.
The Baton was in New Zealand for four days before heading to Australia in the run up to the upcoming Birmingham Commonwealth Games, set to run from July 28-August 8.
Ryman Healthcare has partnered with the New Zealand Olympic Committee which was why the village was able to play a part in the Relay. 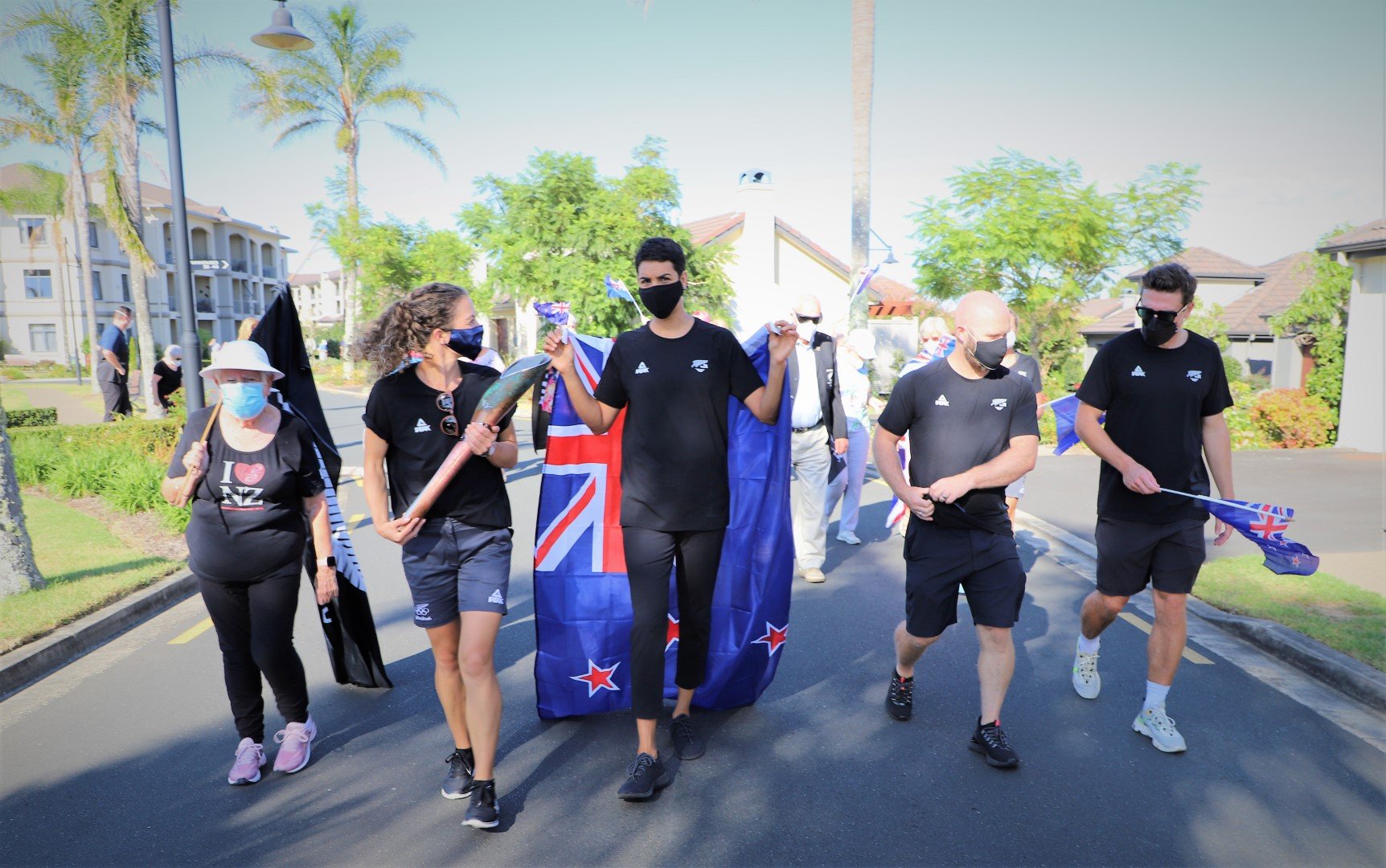 Olympic and Commonwealth Games athletes mingle with Edmund Hillary residents during the parade around the village grounds. 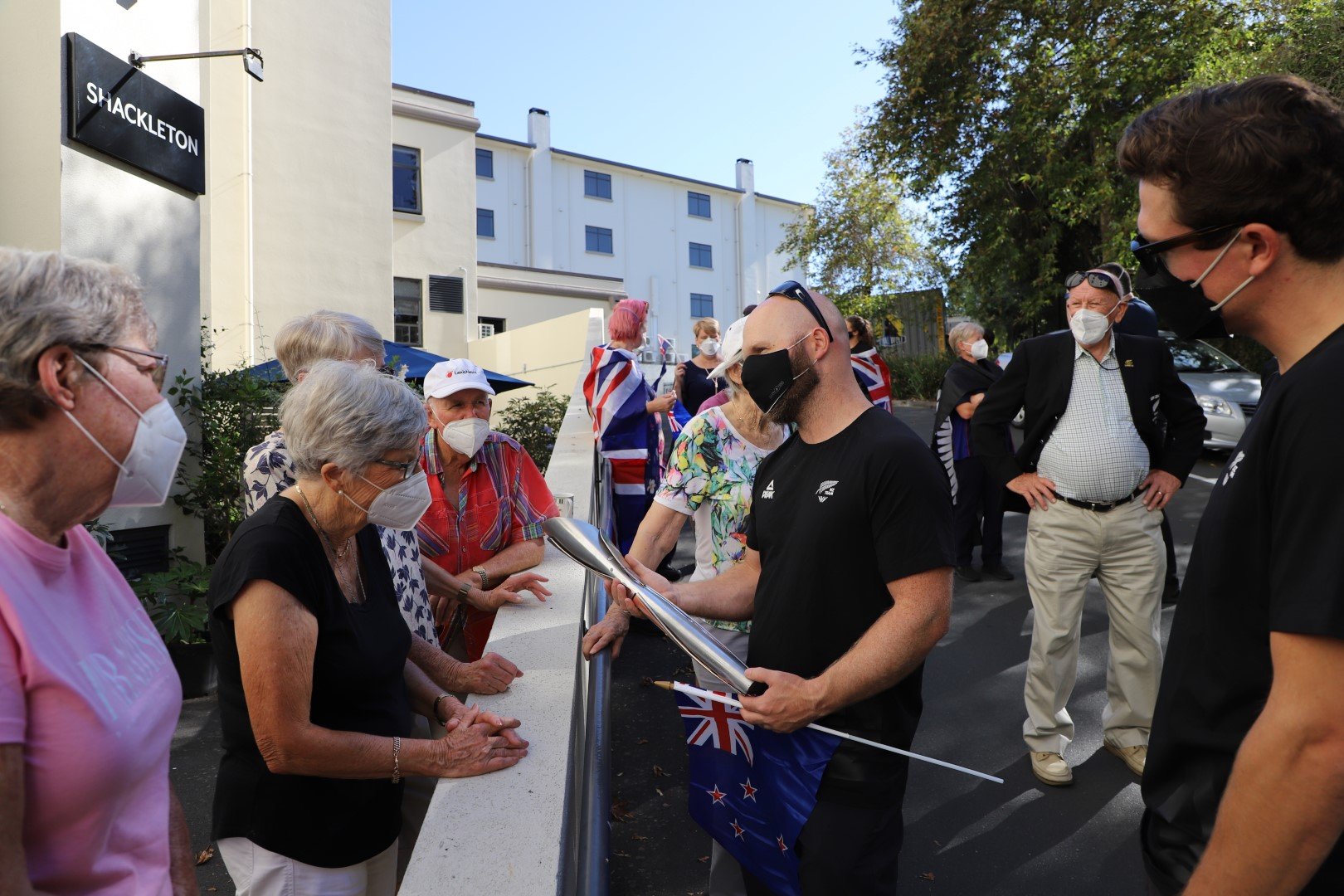 Medal-winning weightlifter Richie Patterson explains all technology behind the 2022 Baton to residents (above) while triathlete Evelyn Williamson shows it to the Edmund Hillary kitchen team (below). 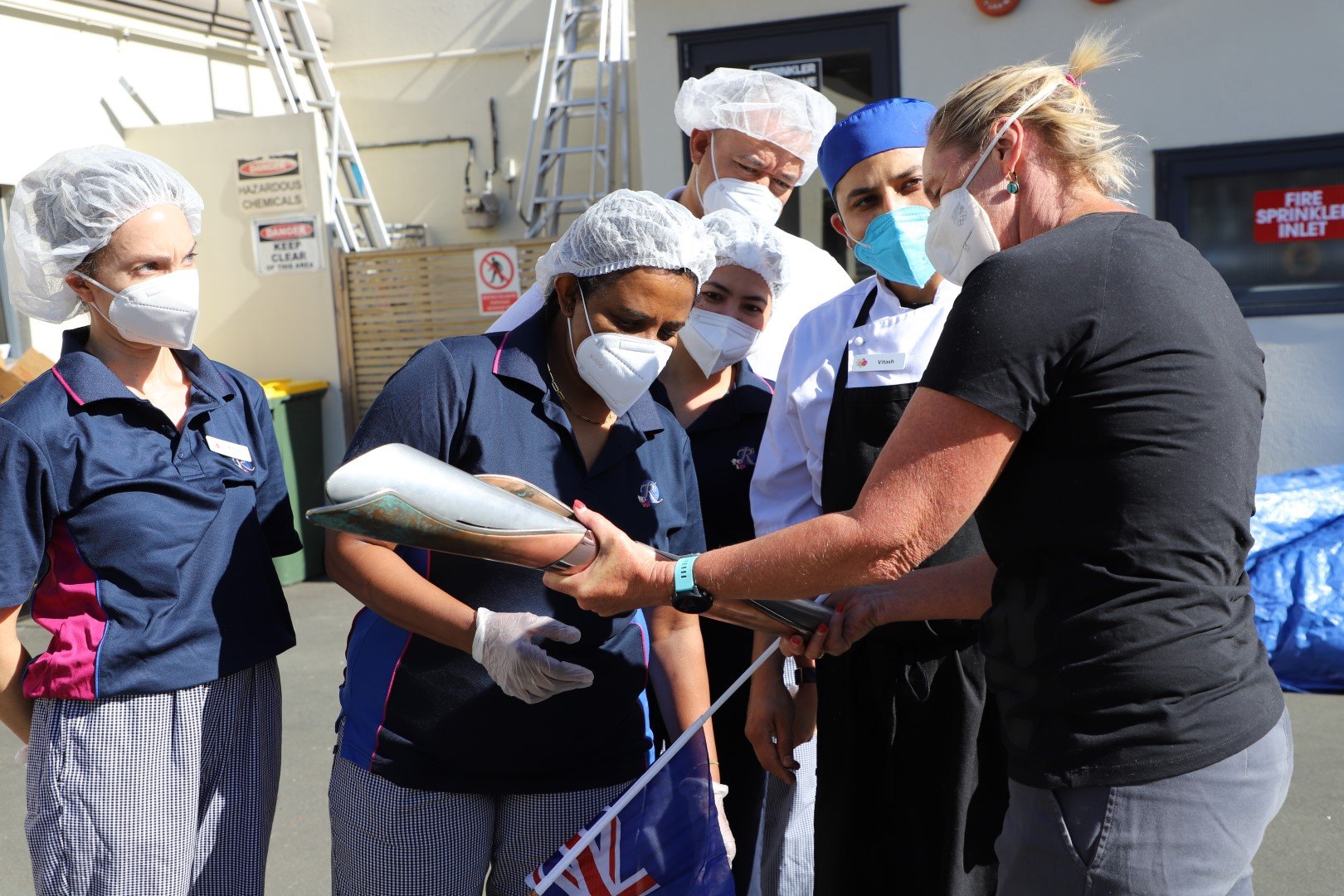 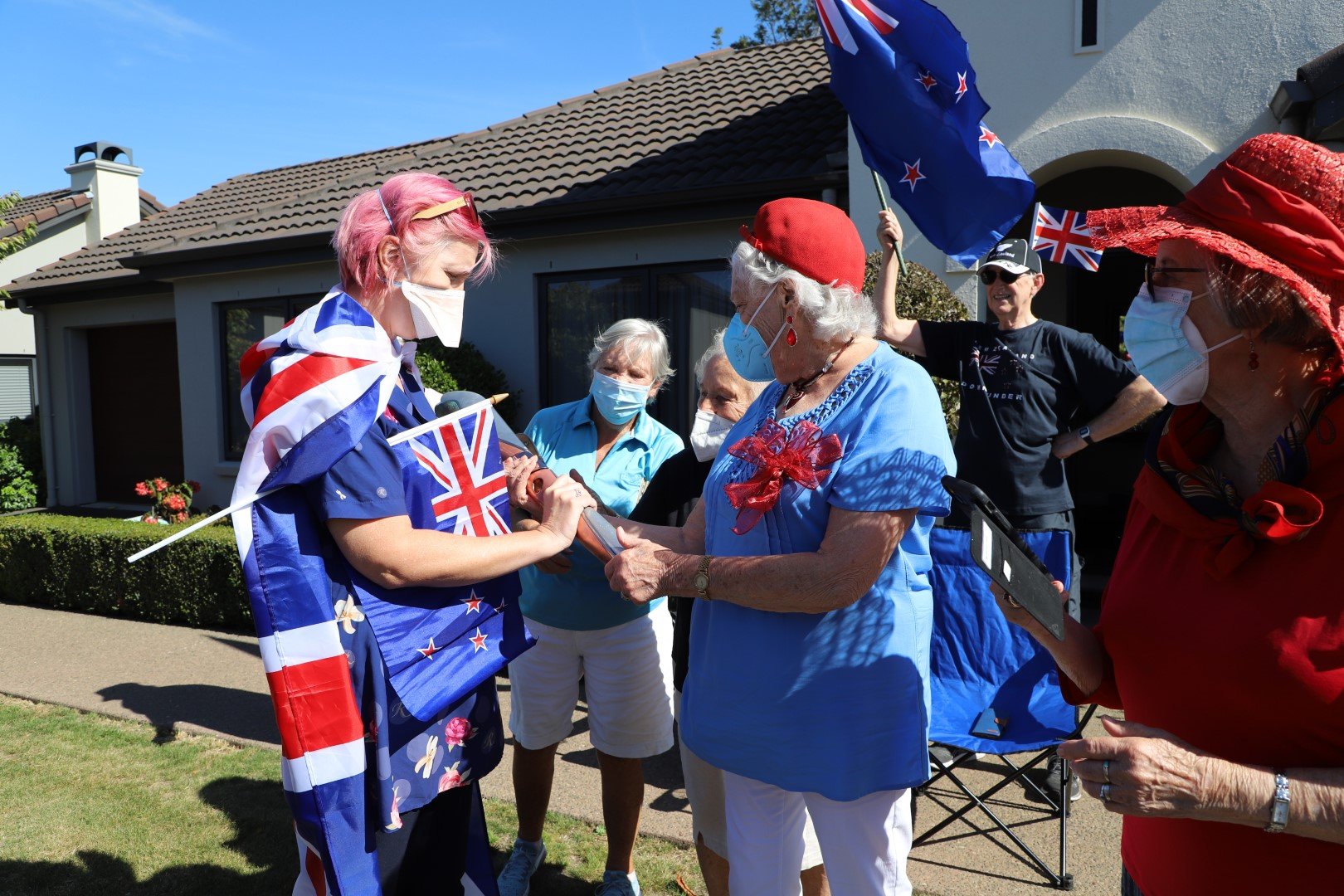 Both residents and team members from Edmund Hillary welcomed having a taste of normality, with many events and activities having to be postponed during the Omicron outbreak.
Val Murray, who stood with a group of friends wearing red, white and blue clothes cheering the parade-goers on, said: “It’s wonderful to be part of it. We love supporting our athletes.”
Senior Community Relations Representative Steph Cawte drove a buggy decorated with flags and playing upbeat music around the village while the parade group waved flags and danced as they followed behind, stopping off for photos as residents and team members took turns to hold the Baton.
Many were blown away by the newly-designed 2022 Baton model, which is a technological marvel, explained New Zealand Olympic Committee Operations Manager Stu Davies.
“There is a 360-degree camera built in to record and transmit images, and there is a special chamber beneath the brass leaf plaque on the top which holds a message from the Queen.
“No one knows what it says and we won’t know until it’s read out at the Birmingham 2022 opening ceremony,” he said.
Parts of the Baton are made from copper, aluminium and brass and there is also a platinum strand woven through it to pay homage to the Queen’s platinum jubilee year.
Added to that three are LED lights and a heartrate sensor to display the heartbeats of the Batonbearers and special sensors which analyse environmental conditions using laser technology.