Back to Ryman news
Written by Maryvonne Gray
on August 02, 2022

Murray Halberg construction site has become the first Ryman Healthcare site to achieve Mates in Construction accreditation.
The milestone achievement is proof that the Lynfield team means business when it comes to striving towards good mental health and wellbeing on site, in an industry where suicide rates are shockingly high.
Now, the hopes are that other Ryman sites will quickly follow suit.
James Sendall, Field Officer for Mates in Construction, presented the accreditation certificate to the Murray Halberg team, and praised them for their efforts in embracing the programme at a time when stress levels were at record levels in the construction industry as a whole.

“There were 607 suicides in New Zealand last year and in our industry it’s about one person every week,” he said.
“We’re actually six times more likely to lose someone to suicide than a workplace accident.”
The pandemic had compounded the various stressors that affected construction, with supply and labour shortages adding to the pressures.
Young men aged 20-24 were typically the most at risk, he said.
“It’s a time when they might be leaving home for the first time and going flatting, they’re organising their own finances, there could be a relationship breakdown or maybe they’re getting bullied.
“That’s actually the number one in terms of pressures, especially when you’re young and then you get shouted at when at work and that old school attitude where it’s just ‘get the job done’.”

The site team gather for the Mates accreditation presentation.

Mates in Construction is a preventative programme which originated in Australia in 2008, following the Global Financial Crisis. It launched in New Zealand in 2019.
Ryman Healthcare partnered with the not-for-profit organisation in November 2020 in a bid to raise awareness around suicide prevention and to encourage people to check in on their fellow workers.
Murray Halberg Wellbeing Coordinator James Earls used to be a field officer for Mates in Construction so was perfectly placed to lead the team through the accreditation process.
He encouraged other sites to do the same, saying accreditation was a way of formalising their commitment to having processes in place should someone on site find themselves in need of help - or wanting to help a colleague.
“It’s more than just putting up signs and flying the Mates flag,” said James (Earls).
“It’s about encouraging people to feel comfortable talking about themselves and changing the perception that you’re being weak if you’re struggling.
“We need to educate people of the need to be open and support each other, and if you see your mate struggling, to empower you to ask that hard question – are you thinking about suicide?
He added: “You don’t need to solve the problem, but you know there are people on site to go to for help.”
These people are known as Connectors, who link up the person with someone who is ASIST trained, which stands for Applied Suicide Intervention and Skills Training.
If a site is accredited it means 80% of the team must have received general awareness training at all times and there should be a ratio of 1 Connector per 20 workers. The site should also provide access to someone who is ASIST trained.
James (Sendall) said: “It’s about being that available resource before things happen, the fence at the top, and helping others to know what it looks like when someone is struggling, and not just saying ‘harden up and move on.’
Knowing team members well enough to spot changes in behaviour was key, he said, referring to these changes as ‘invitations’.
“They’re inviting you in. And if you take that 10 seconds of courage to step into that person’s world and ask ‘are you okay?’ it can make a world of difference.” 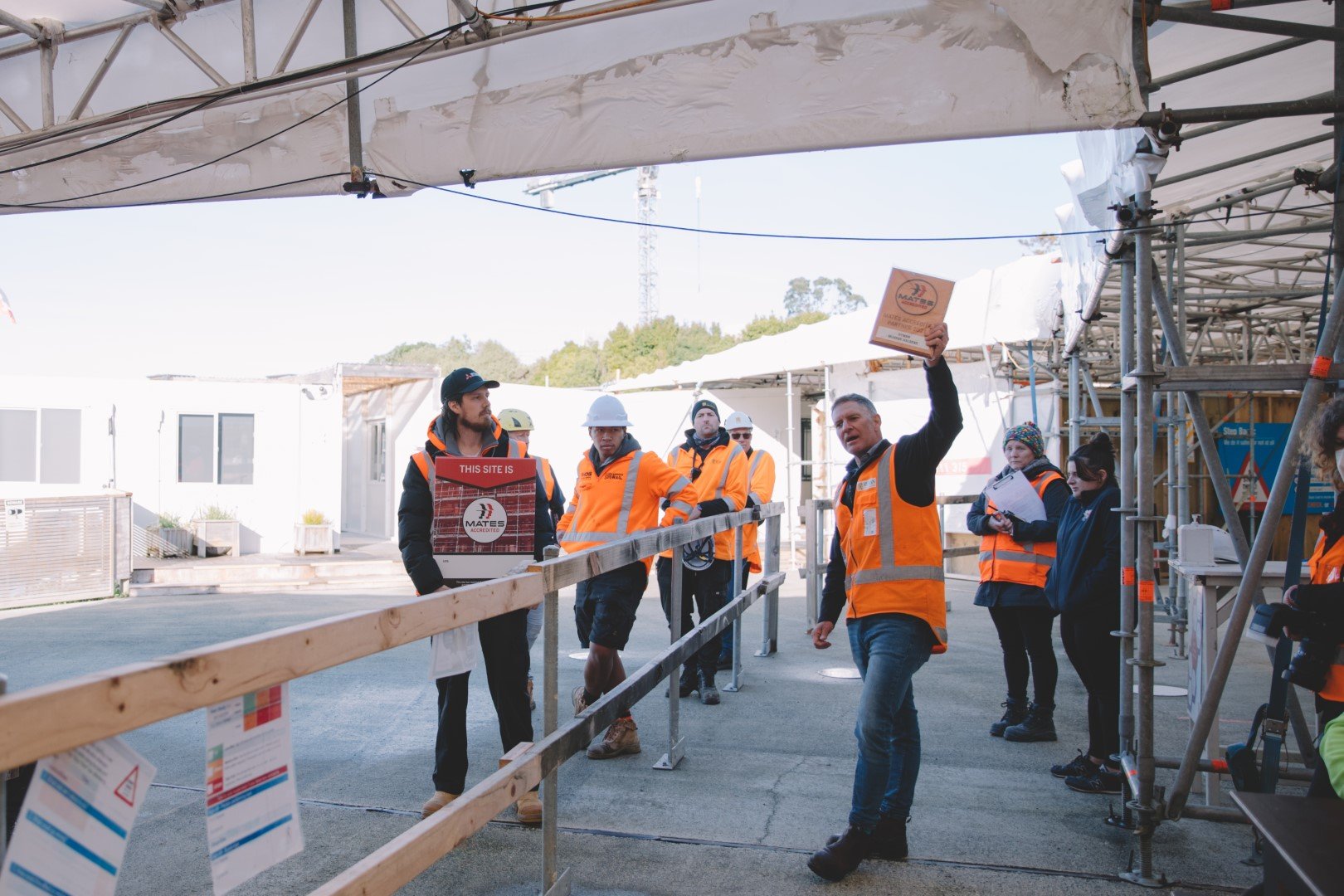 The two connectors at Murray Halberg were Health & Safety Coordinator Denise Chandler and Hammerhand Feiloeua ‘Tiny’ Tuipulotu.
Outgoing Project Manager Dale Sadler praised the team for being ‘part of the solution’.
“This accreditation really demonstrates the intent and desire of all the workers on the Murray Halberg site to better understand the impacts and signs of life stresses which we all experience.
“Be they at work, at home or in whichever sector of our lives, these workers have all considerately put themselves in a position to assist in identifying any possible issues and becoming part of a solution to help out their Mates.”
Natalie Finn, Ryman Healthcare’s HR Manager Construction, agreed.
“It’s a fantastic achievement for the Murray Halberg team, and is recognition for their hard work promoting Mates and encouraging people to have these important conversations on site,” she said.
“We’re looking forward to seeing our other sites becoming accredited in the future.”