It started out as a way for Mia Bernard to pass the time during breaks at work in the Diner Bolt café at Murray Halberg construction site.
But since the former art teacher and qualified artist finished her stunning drawing of a tui, it has grown wings and taken flight in a way she didn’t expect.
“It was just something I was drawing on my breaks and then James saw it,” she laughs.
Site Covid Wellbeing Coordinator James Earls, who Mia refers to as like her ‘work dad’, was blown away by Mia’s talent and posted it on the ChattR Wellbeing channel to brighten everybody’s day.

“I was so impressed with her artistic prowess I asked if I could share it. I felt very proud of her,” he said.
It was there that Edmund Hillary Sales Advisor Becky Gillanders spotted the beautiful bird.
As a member of the Tui group in the sales team, where advisors post tui emojis every time they complete a sale, Becky was keen to use Mia’s tui as her next emoji.
“I thought it was beautiful and so I asked her if I could use it in the Sales team’s ChattR. I just think she’s an amazing artist!” Becky said.
Mia used Prisma coloured pencils to draw the tui on a plain plywood wall at the back of the site construction café.
“I find them much easier to blend and they’re tidier to work with than paints so ideal to use when I’m on my break at work.”
And now, the tui has a wee mate next to him, a cute pīwakawaka, prompting James to suggest Mia fills in the whole wall with an indoor mural of bird life.
“I did a garden fence with native birds and I’d love to share more of my talents with Ryman,” says Mia.
“It’s great knowing that what I create makes people happy.” 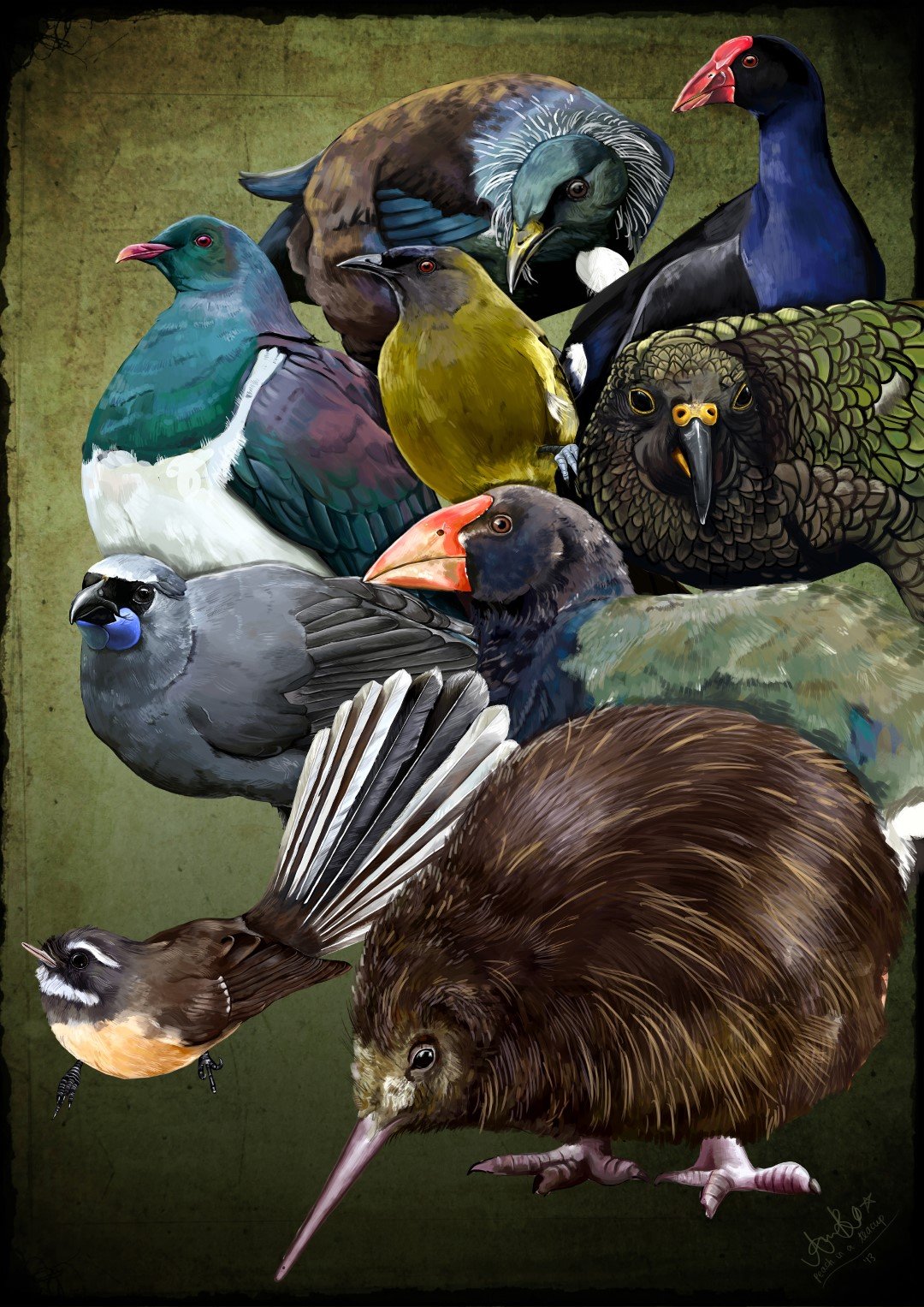 Native birds are a favourite of Mia's

Explaining her artistic background, she says: “I’ve always been into drawing and painting. I went to art school after I finished high school and it’s my number one passion.”
After finishing her studies at the Learning Connexion – School of Creativity and Art in Lower Hutt, Mia worked for a few years for the Realisticus Art Academy, teaching primary school kids how to do art in an after school programme.
She has since embarked on a certificate in journalism and picked up the job at the Diner Bolt café to support her studies.
“I only just started with Ryman in July and then of course we went into lockdown.
“I had the tui in my head – they’re my favourites, but I think it was also that feeling of missing the freedom we previously had and the tui have that feeling about them.”
Mia, who also loves painting and drawing portraits of people, has since brought in a few of her artworks to show colleagues. 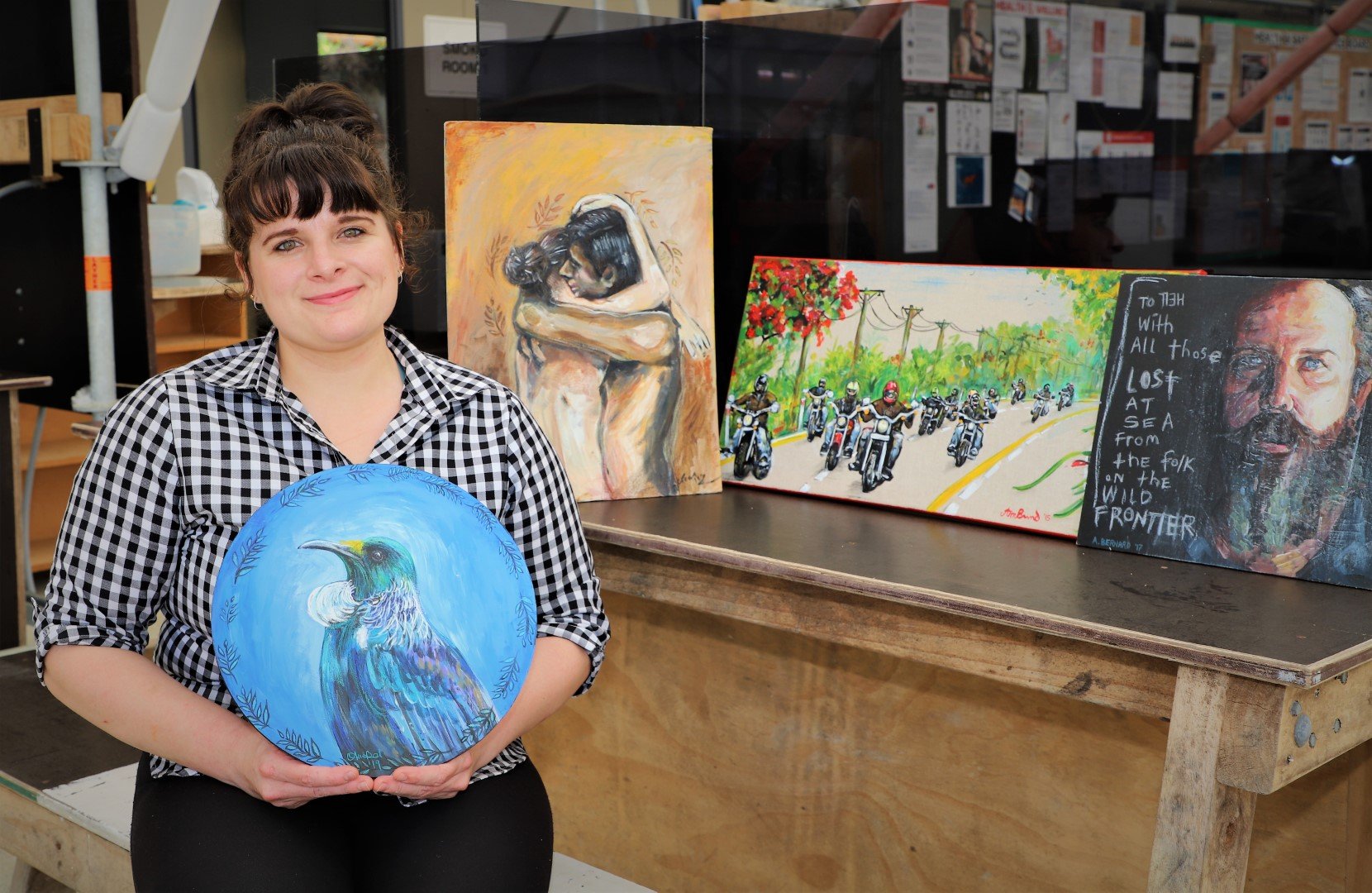 Mia shows off more of her amazing art

They show an eclectic taste and a keen eye for colour and form.
Amongst them are a couple in an embrace, a group of bikers riding to the beach, a portrait of late British DJ and music producer Andrew Weatherall and another brightly coloured tui.
“My boyfriend is one of the bikers so that was based on a real scene, and the couple was inspired by an album cover, and then Andrew Weatherall, he is my muse basically.
“I actually sent him one of my paintings because I love him so much.”
In the meantime, Mia has the café wall to keep her occupied – and we can’t wait to see what goes on it next!

Check out more of Mia’s art on Instagram at unearthlings_art.