The first hug with his mum Joan after three years apart was ‘absolutely lovely’, said Paul Breed, as he gives Joan another loving look.
And Joan’s reaction to seeing her son: “Unbelievable!”
Paul faced a marathon journey to visit Joan, who lives in the hospital unit at Linda Jones Retirement Village, and dad Noel, who is in a townhouse with Louis the 11-year-old toy poodle.
“It was exactly 38 hours and 20 mins to travel to the door,” said Paul, who flew out from the UK on Monday 14th March, the day New Zealand relaxed its MIQ requirements, and endured three transits in Dubai, Kuala Lumpur and then Auckland before flying into Tauranga.

Then, like his older brother Stephen had done a few days beforehand after arriving from Australia, Paul self-isolated for five days before visiting his mum and dad.
“It wasn’t really a hardship being on my own for a few days at the beach,” says Paul, who stayed in accommodation at Mount Maunganui.
“Because I was coming in here the sensible thing to do was go over there and spend five days by myself.
“I just phoned in my Day 1 test result and then Day 5 and then I hired a car and came over.”
He agreed with Stephen, who had felt the risk was too high for a vulnerable community.
“I didn’t want to be that person who brings Covid into an aged care facility, I saw what happened in Australia,” said Stephen, during his visit last week. 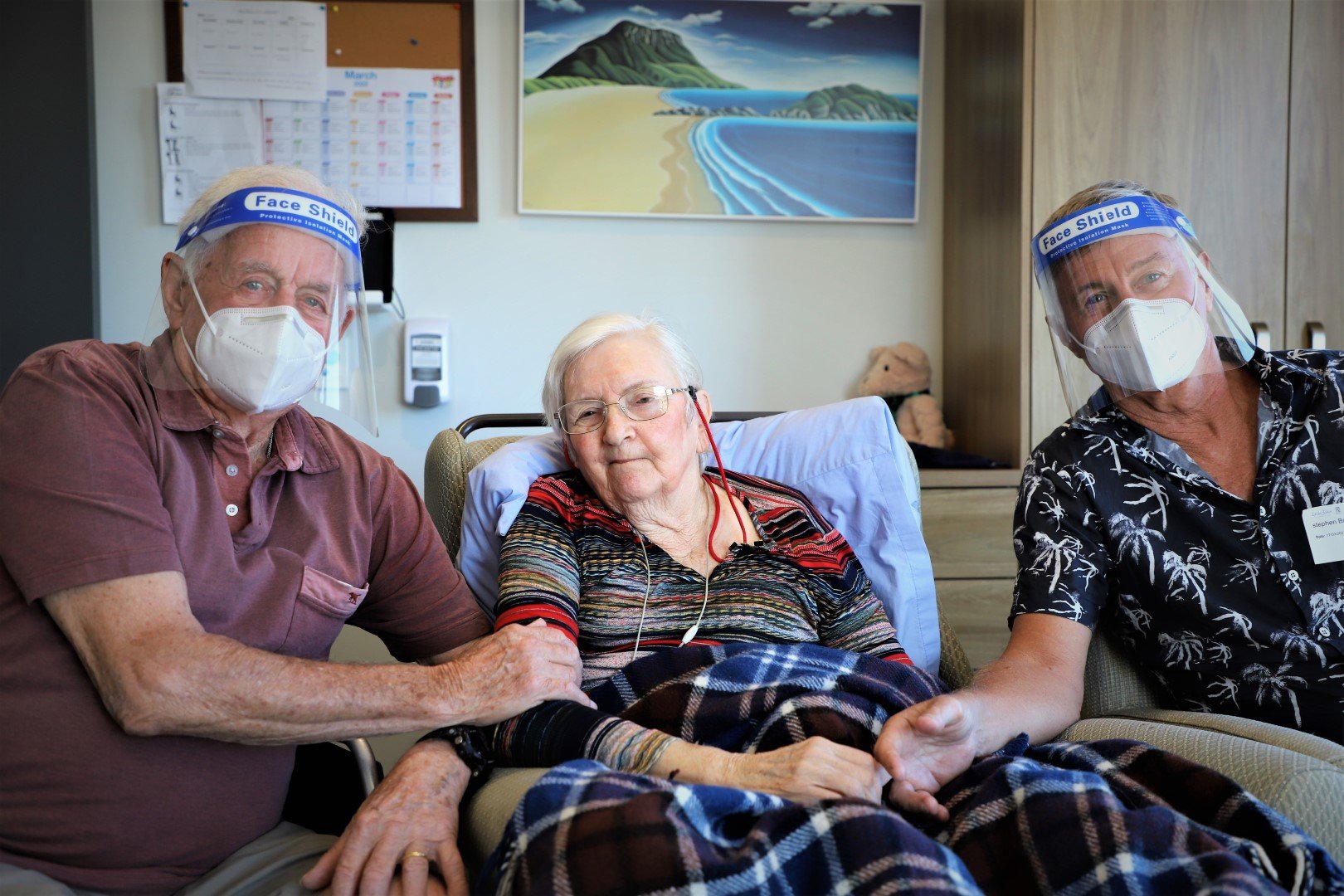 Because of their dedication to reducing risk, it meant the two brothers didn’t actually see each other in person, but they said they will save their reunion for another time.
Right now it was all about spending time with their mum Joan, who suffered a debilitating stroke in 2018, and dad Noel.
Stephen had been fortunate enough to visit Noel and Joan last July when the trans-Tasman bubble opened up.
That time he brought his two children, aged 11 and 15, with his teenaged daughter delighting residents with her piano playing.
It has been close to three years for Paul however.
“June 2019 was the last time we saw each other, when mum and dad came over to see us,” Paul said.
Joan had recovered enough from her stroke to manage the trip, and during the two months they were there, she would walk for a mile each day.
“Everybody was telling me ‘you can’t do it’ but when people say you can’t do it, it makes you want to prove that you can,” said Joan.
“And I knew that my brain was still working!”
Paul lives across the road from a pub in Dunchurch, near Rugby in the Midlands, and says the lure of a cold glass of cider was a great encouragement to complete the walk.
“Mum would walk one mile every day and the reward was half a Strongbow afterwards!”
The Breed family would see each other every year, with either Noel and Joan flying over to see Paul and his three children, or flying them all over to New Zealand.
Said Noel: “We went over there every year for 20 years.
“We’re a close family, even though geographically we are far apart.” 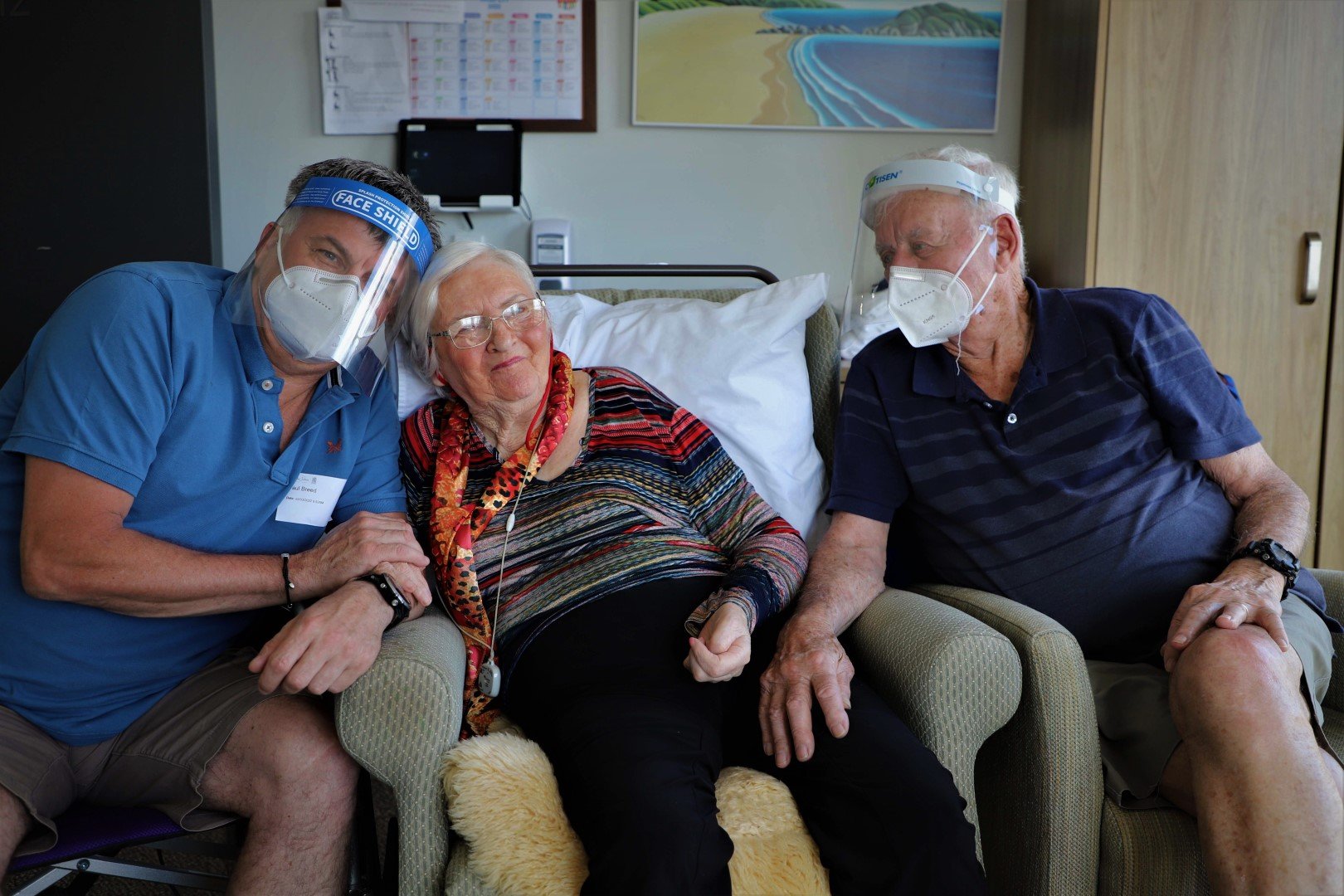 Younger son Paul is delighted to give his parents a hug again after years apart.

“It’s brilliant to be back, the last couple of years have been hard,” said Paul.
“We have built some amazing memories. Both Stephen and I have lived overseas for 30-35 years so when we get back together we have some real quality time.
“It’s great to be back.”
The family was now looking forward to some more quality time together, taking walks around the village grounds and enjoying the fresh air until Paul leaves on 7th April.
This was the first time Paul had seen his parents in their new home, as they moved into Linda Jones two days after returning from the UK.
While he had always felt assured that they were safe during the pandemic, it was great to see first-hand the strict measures being taken by the village team, he said.
“I always got the sense of how brilliant the staff are here, but it’s really nice and really reassuring to see it for myself.”