Linda Jones has officially opened the Hamilton retirement village named in her honour.
The pioneering Kiwi jockey and campaigner for women’s rights flew to New Zealand from her base in Queensland to officially open the village with Ryman Healthcare’s Group Chief Executive Richard Umbers today (Thursday June 30).
Linda said having the village named in her honour was a thrill.
“I’m very proud of it – I still can’t quite believe it. It’s a beautiful complex and it turns out I know some of the residents – and I know how much people enjoy living here and what the staff do for them.

“It’s an unreal feeling, I still have to pinch myself.’’
The opening also marked the 45th anniversary of her winning her battle against the New Zealand Racing Conference (NZRC) to compete against men. 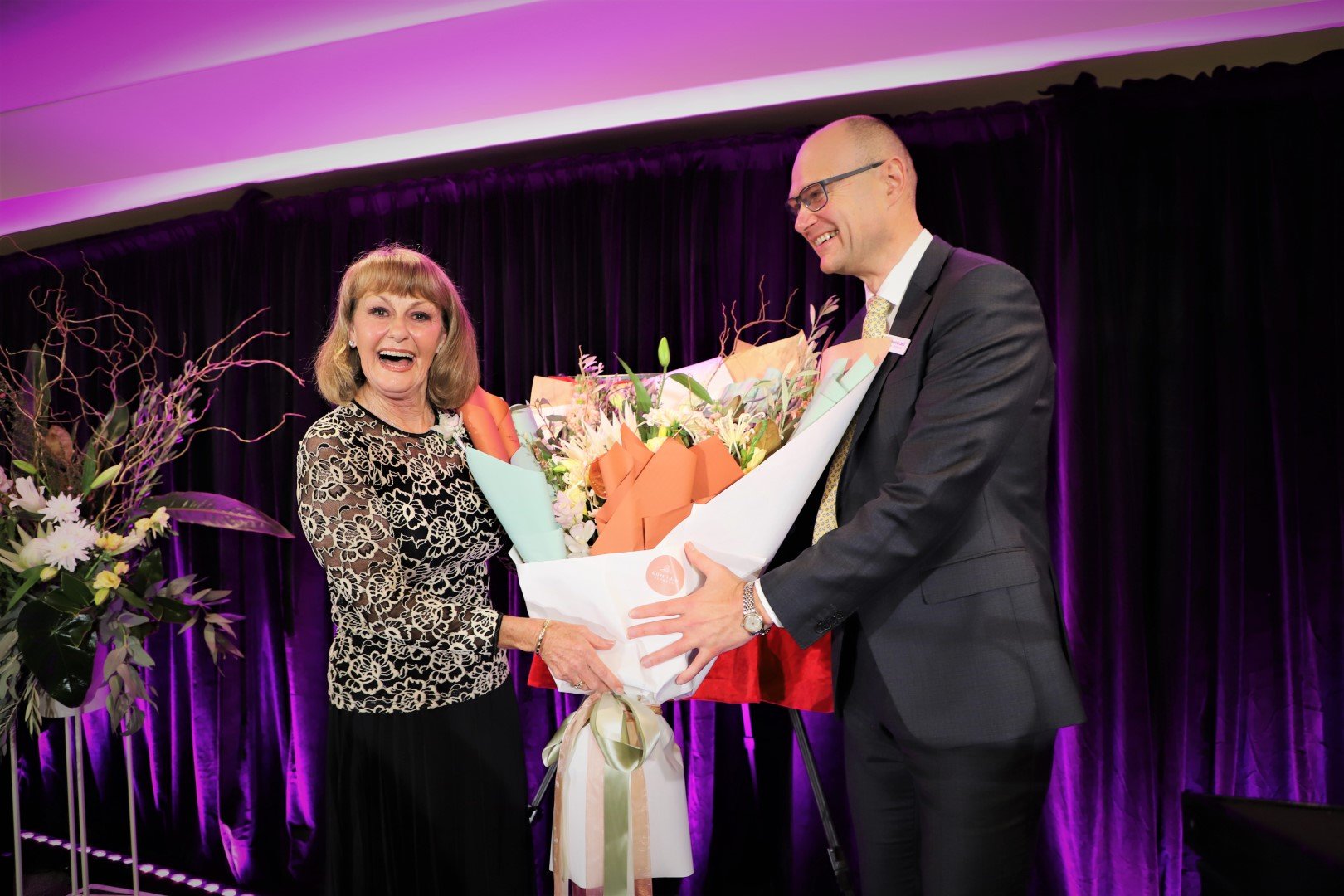 Richard Umbers presents Linda with a huge bouquet of flowers.

Back in the 1970s women were restricted to female-only races known as ‘Powder Puff Derbies.’
Linda, backed by her trainer husband Alan, campaigned to get equal status for women. The NZRC refused, but the passing of a new Human Rights Commission Act in 1977 meant that position was no longer tenable, and she was granted her licence.
She went on to beat the men at their own game, chalking up a whole lot of firsts for women.
Linda was awarded an MBE in 1979 for her contribution to racing and women’s rights.
Richard Umbers said it was an honour to have been able to name the village after Linda.
“Linda stands out as a trailblazer for women, a brave and fierce competitor in a tough sport.
She’s a New Zealand icon whose career was forged in this region and we’re incredibly proud to have her name on this village.’’ 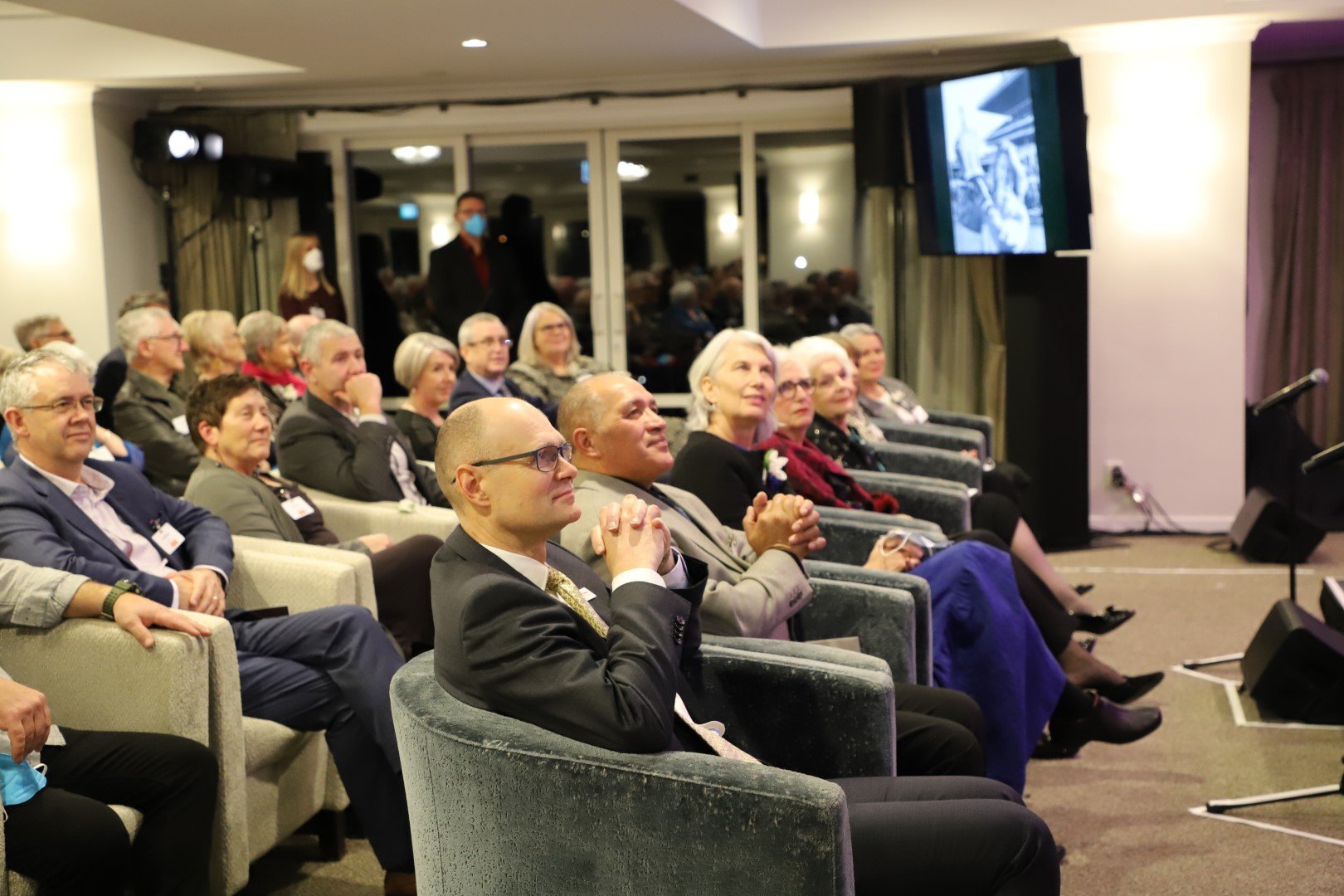 Work started on the $260 million village on River Rd in 2018, and it has been a strong seller, with more than 330 residents living at the village on the banks of the Waikato River.
“It’s gone better than we had ever expected, and the momentum has grown with the community,’’ Richard said.
The village includes townhouses and apartments, as well as a café, indoor swimming pool, movie theatre, library and billiards room.
Main buildings are named after Linda’s favourite winners, include Holy Toledo and Big Bikkies.
Ryman arrived in Hamilton back in 2002, when it opened its Hilda Ross village.
Last year Ryman Healthcare announced plans to invest another $150 million in a new village west of Cambridge.
The new village, which is on 8.6 hectares of land on Cambridge Road, will be home to more than 300 residents. 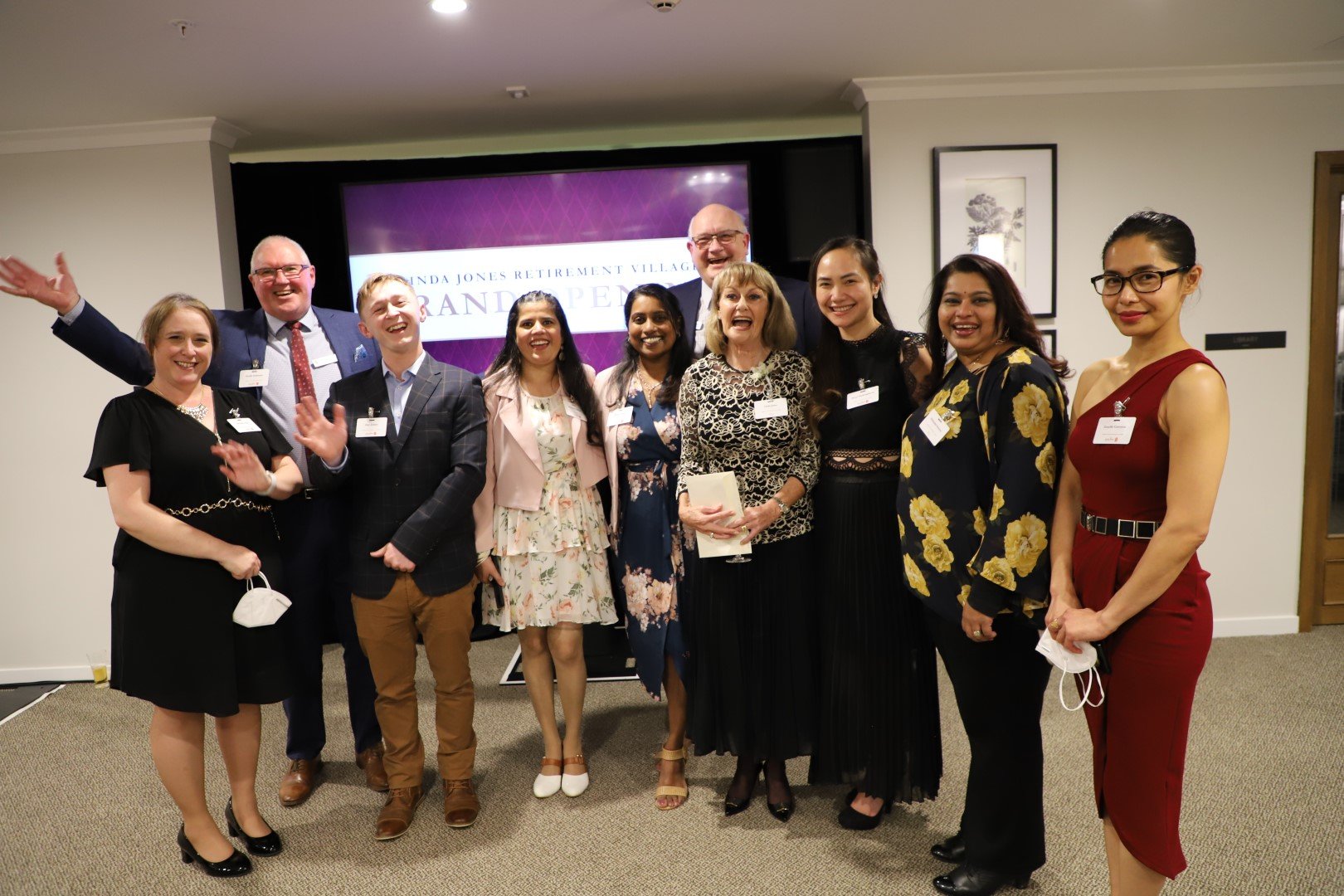 About Linda Jones: Linda Jones is recognised as a trailblazer for New Zealand women in sport.
As the first woman to be inducted in the New Zealand Racing Hall of Fame, Linda is a true Kiwi icon.
Her brilliant career was forged in the Waikato.
After getting noticed in the women-only ‘Powder Puff Derbies’, Linda became a media sensation by leading the campaign for equal rights in horse racing.
Her first attempt to apply for an apprentice licence was turned down. The reasons for the refusal included being too old (she was 24), not strong enough, and the fact that she was married.
It took her three years to get the licence but finally in 1977 she became the first New Zealand woman jockey to gain the right to race against men.
It was at Te Rapa in 1978 that she notched up her first win, which then led to a flood of historic firsts to be achieved.
She was the first female rider in the North Island to take home first place and she became the first woman to ride four winners in one day, also at Te Rapa.
Linda was also the first woman to win a Group Race, the first to win at Ellerslie and the first woman in the world to win a derby.
She cracked some firsts across the Tasman too, including becoming the first woman to win against men in Australia.

Nearly 3,500 ready-made frozen meals have been donated by Ryman Healthcare to the Auckland and Christchurch City Mission...

Transcribing documents may sound like a tedious task for some, but for one Miriam Corban resident, it has been a labour ...