Residents at Ryman Healthcare’s Grace Joel village were thrilled this week to receive a very thoughtful delivery from nearby St Heliers School.
While the traditional in-person visits are temporarily off the agenda during the Omicron outbreak, the 26 children of Ms Sarah Mill’s Year 4 class took pencil to paper to write to the residents instead.
The children, mostly aged eight or nine-years-old, described details about their family life, their interests, favourite foods and best subjects at school.
“I enjoy going to water parks and playing laser tag. I hate nuts,” wrote Emily Ball, who added that she prefers chocolate cake instead.

Meanwhile Jackson Pateman talked about his two sisters and brother, his cat called Ziggey and his best friend Ryker while adding a few of his likes and dislikes too.
“I hate soup because it’s liquidy. The best season is summer because you get to swim and it’s my birthday then!”
The letters were received with much delight from residents, said Activities Coordinator Avrill Burchell.
“The residents all felt that since the children took the time to write, they should respond, as letter writing is a dying talent.” 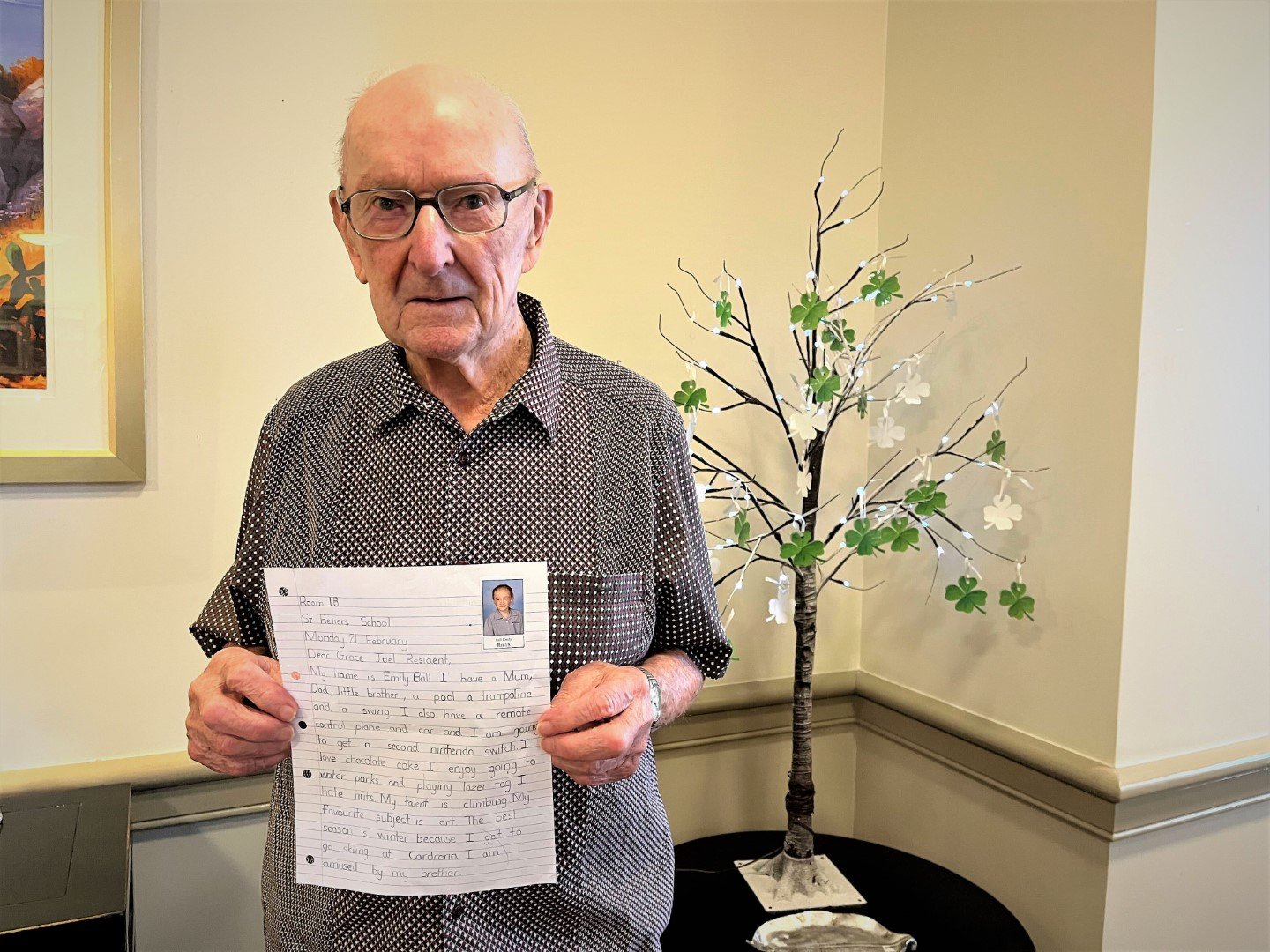 Two of the residents, Cliff Hart and Jim Espie, both happen to be former pupils of St Heliers School and couldn’t wait to write back to Emily and Jackson respectively.
“It was a lovely surprise to receive the letters,” said Jim. “It’s not the sort of thing that you get every week!
“And the fact that it was my old school gave it an added attraction for me.”
Being a great record-keeper, it was easy for Jim to dig out an old photo of the class of 1933, which he included in his reply to Jackson.
“I’m a bit of a photo collector and I have got them all categorised.”
While Jim typed out his reply on his computer, Cliff, who started at the school in 1931, wrote his by hand.
“I am now 95,” he wrote to Emily.
“I was born in St Heliers in 1926 and started at St Heliers School in 1931. We had some wonderful teachers and as I have grown older I believe the most important part of your education is the primary schooling.”
Cliff says the teacher that made the biggest impact on him was called George Thomas Montague Browne and describes how he would travel every day from Castor Bay to teach the children.
“He would take a bus from Castor Bay to the ferry, he’d get the ferry across to the city, then another bus from the city to St Heliers, and then he would walk up the hill to the school with his case under his arm.
“He only had one arm because he lost the other one in WW1. He was the most incredible man and he was the best teacher I have ever had – he took no nonsense but he was like a father.”
Jim, being just a couple of years older than Cliff at 97, also remembers Mr Browne, and has a very clear memory of the day one of the more curious children walked up to the front of the class to take a look up Mr Browne’s empty sleeve!
“He was looking for the arm, which he didn’t have,” laughed Jim at the memory.

The letters that Jim and Cliff wrote back to Jackson and Emily, including Jim's old school photo from 1933 when he was the same age. Jim is circled in red.

Both Jim and Cliff said their days at St Heliers School were a very happy time, with both attending a school reunion in 2002 to mark the 125th anniversary.
“We’re hoping to get back to normality soon so we can maintain our connection to the school,” said Jim.
Both urged the children they were addressing in their letters to make the most of their school days.
Wrote Jim: “I hope that you will always try your best to learn all you can while you are there because that will help you to live a useful life.”
Cliff, who is a keen classical music enthusiast who regularly puts on ‘Cliff’s Classics’ programmes in the village, hoped the children would get into music.
“Please learn music while you are young – it will be an interest for life. I wish you well and please work hard, but also have lots of fun. PS I hate nuts too!”
Year 4 teacher Sarah Mill said the idea came about for an exercise called ‘writing for a purpose’ and then all the letters were put into an envelope with a stamp on and mailed, in true old school fashion!
Now, while the children await their replies, she said: “I’m so pleased the residents enjoyed the letters.
“We would normally come up to Grace Joel for a visit but until we can be face to face we might do another writing exercise.”