Jean Sandel Residents village residents revelled in a double celebration this week, ecstatic to receive a trophy to honour their Olympic-styled exploits and also learn of a $30m village expansion.

Highlights of the new Ryman Healthcare village upgrade will include 59 new townhouse and apartments, featuring the latest of Ryman’s best living designs.

Ryman Healthcare Group Chief Executive Richard Umbers told residents and the Ryman team the improvements would be exciting for everyone with a connection to the Jean Sandel village. There was a waiting list to get into the village, and the extension could start by late summer with a minimal impact on the existing residents. 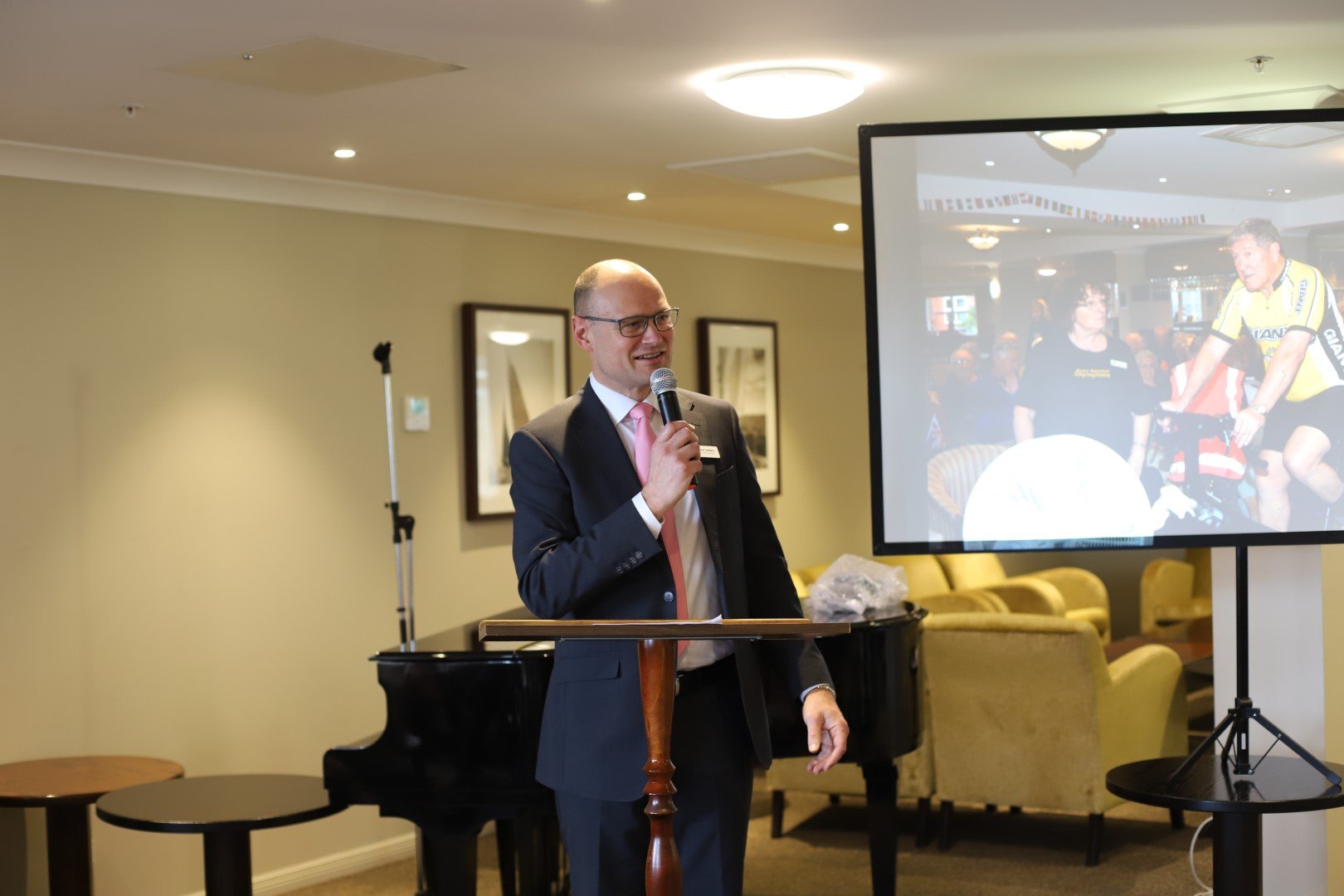 “We have extraordinary demand for (village homes), because the residents here are such strong advocates for what we do, and it’s terrific, actually, the whole spirit of the village.”

The new homes will become a welcome part of a stunning village in a beautiful part of New Zealand.

“The reason we are spending $30 million to upgrade and extend the village is largely down to you,” Richard said.

“The village has been a fantastic success over the years and there are a lot of people who want to live here.

“We are pleased to be in a position to be able to push the button on the extension.”

Richard was greeted with applause and support when he awarded a trophy to the village for the top position in the world’s first retirement village Olympics.

Ryman Chief Strategy Officer Mary-Anne Stone said the Olympics@Ryman had been an ambitious undertaking but well worth it.

“We saw a chance to combine the power of sport and technology to explore and celebrate new possibilities for our residents to keep fit and have fun. Our vision was a competition that would ignite our network of 44 villages.”

The celebratory afternoon tea was the perfect occasion to “re-enjoy all the impacts of Olympics@Ryman... Thank you to everyone who took part.”

Richard and Mary-Anne were welcomed into the village by Village Manager Michael Borostyan and Sales Advisor Michelle Lord-Roper, who alongside other team members encouraged the participation in the Games event, and asked everyone to enjoy a ‘top village’ accolade.

Ryman has created an annual award recognising the ‘Ryman Active Ageing Village of the Year”. This year’s winners, Jean Sandel of New Plymouth, took honours in the Olympics@Ryman medal tally, with and individuals collectively winning a gold, silver and bronze.

“Of course as people age, exercise is such an important activity for people to undertake,” Richard said. 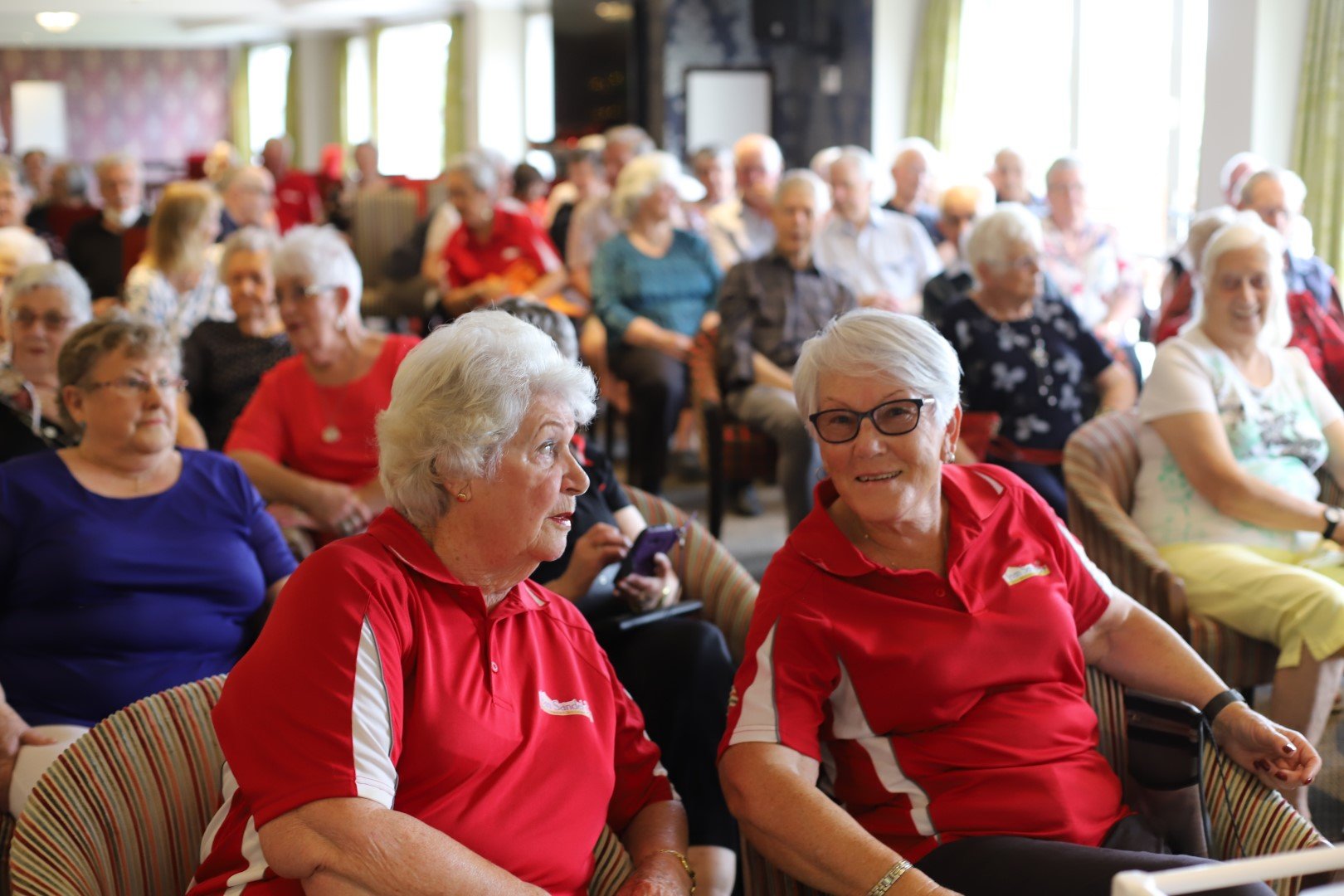 The entire village is perfectly positioned on a sunny site with elevated views of the sea and Mt Taranaki. It already has nearly 400 residents, living in independent apartments townhouses and in care. The village and its team offer serviced apartment, resthome, hospital and specialist dementia care.

The residents have access to facilities including grand internal atrium, library, gym, hair and beauty salon, bar, shop and movie theatre. Outside there is an all-weather bowling green, and a putting green.

The indoor heated swimming pool & spa will be getting a refresh as part of the expansion and upgrade plan. There will also be a small café added to the existing shop and a new dedicated craft room.

“The past 20 months have been a challenge for everyone here I am sure. We can push through COVID – because we are a fantastic team,” Richard added.

The New Plymouth village was opened in early 2009, so is now 12 years old. The new work will add homes built to the standard of those incorporated in any new Ryman village.

There are 14 apartments and 21 townhouses proposed within the extension. There are also 24 ‘under/overs’-styled homes, with the unders/overs term referring to the design and different level access points.

The Ryman village is closely connected with the Taranaki community. Village namesake Jean Sandel was the first registered female surgeon in New Zealand.

She was a trailblazer who paved the way for women in medicine. She was a cricket fanatic and a woman famous for breaking the glass ceiling.

For more than 30 years Ryman Healthcare has named its villages after significant local people.

This Jean Sandel addition follows on other work, including a recent project to more than double the capacity of the village’s main lounge. This extra capacity helped match the growth in resident numbers.

It also added features such as an upgraded bar area, and an outside balcony with a view.