Jane Mander men’s shed team does its bit for charity

Back to Ryman news
Written by Maryvonne Gray
on July 07, 2022

A group of handy residents from Jane Mander Retirement Village have rallied resources to help out their local branch of Habitat for Humanity.
Philip Parkes, the unofficial leader of the Jane Mander Men’s Shed, realised he and his fellow Men’s Shed mates could make a big difference to the charity’s ever-growing workload after one of them, Habitat for Humanity volunteer Tony Morris, raised the idea.
“I went along and had a look and said ‘I think we can help’,” said Philip.

With Tony already heading down to volunteer at Habitat one day a week, the idea was for him to bring back to the village any items that needed work.
“This was necessary as the workshop at Jane Mander has a little more room than the Habitat one to work on projects,” Philip said.
Since then the group has helped to fix up furniture in need of repair - usually chairs that can then be sold on - however recently they had a more unusual request.
“This is when it became exciting,” said Philip.
“They had a large number of wooden toy breakdown trucks and truck and trailer combos gifted to them in separate pieces but they didn’t have the time to put them all together, so we said we could help by glueing them or screwing them all,” said Philip. 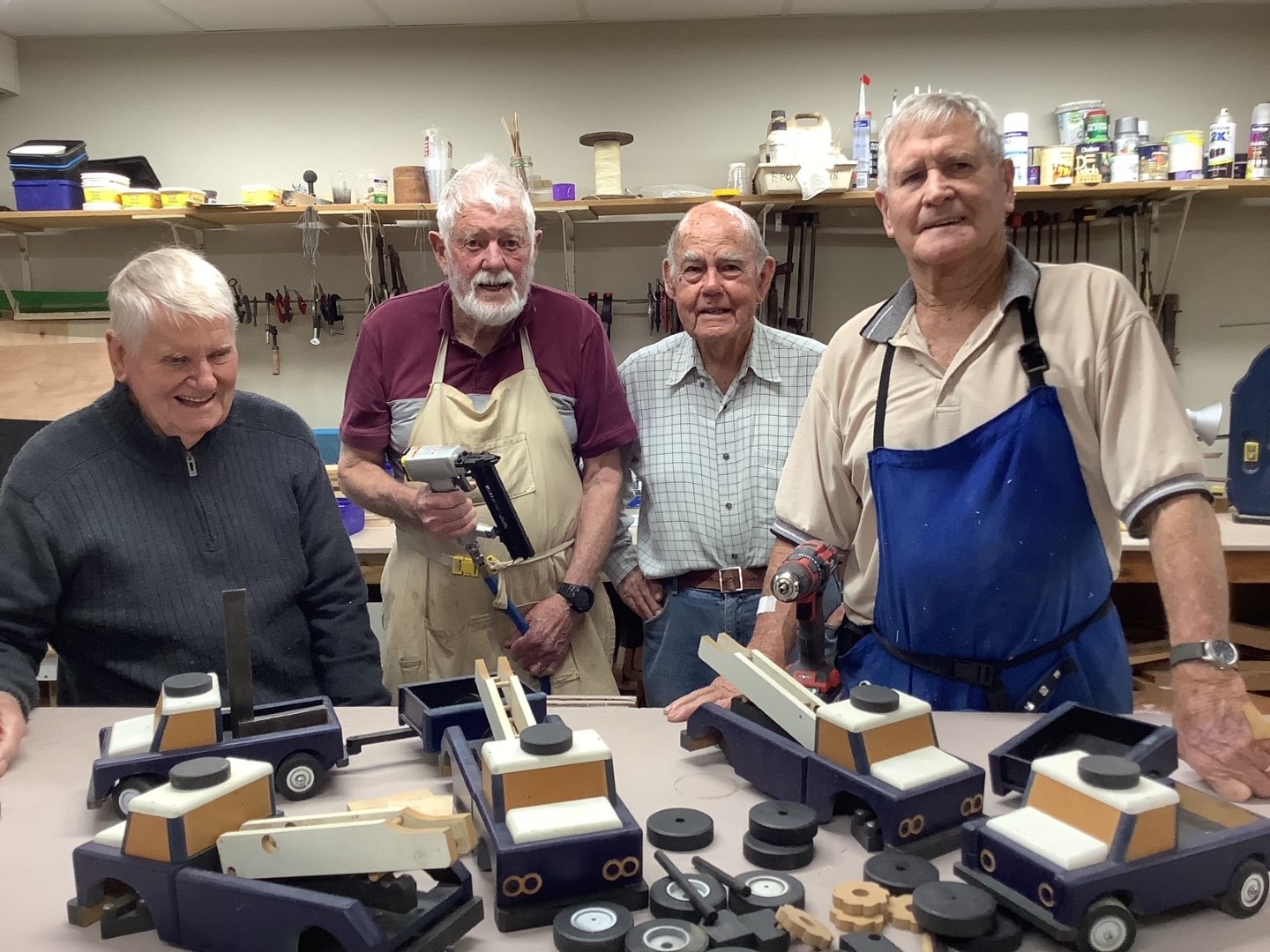 Once completed, the toy vehicles could be sold in the Habitat for Humanity shop with the proceeds all going towards their purpose of building or improving people’s homes.
Carina Dickson, the Tai Tokerau Operations Manager for Habitat for Humanity, said the organisation was thankful and appreciative of the support from the Jane Mander Men’s Shed.
“The time they put in, along with the facilities and skills they offer enable a broader range of work than our ReStore would be able to manage alone.
“Their generous assistance with this work forms a valuable contribution to the ongoing work of Habitat in our region.”
Gary Hamilton, one of the newer members of the workshop team, and Geoff Priestley, a former oil refinery operator, said the work gave the men a great purpose, as well as good company and the chance to pick up some new skills.
“That’s one of the wonderful things coming into the village, you can join in and do things and feel like you’re not just sitting around,” Gary said.
“The village kitchen team put on a bit of food for us on a Wednesday and we’ll have a bit of a yarn, so it’s like a friendship club too.”
The added benefit of this project was the extra experience they all gained. Philip, a retired biology teacher, says his woodwork skills are all self-taught, while Gary, who used to work as a sales rep selling stockfeed to farmers, is more of a novice on the woodwork front.
“It was really worthwhile, as all four members have gained experience and skills that would not have arisen otherwise,” said Philip.
Other projects they have on the go include retired electrician John Langford’s stunning occasional tables and some slightly more straightforward wooden bird feeders which sell either at the village market or on Trade Me.

Graham Edwards carries out repairs (above). 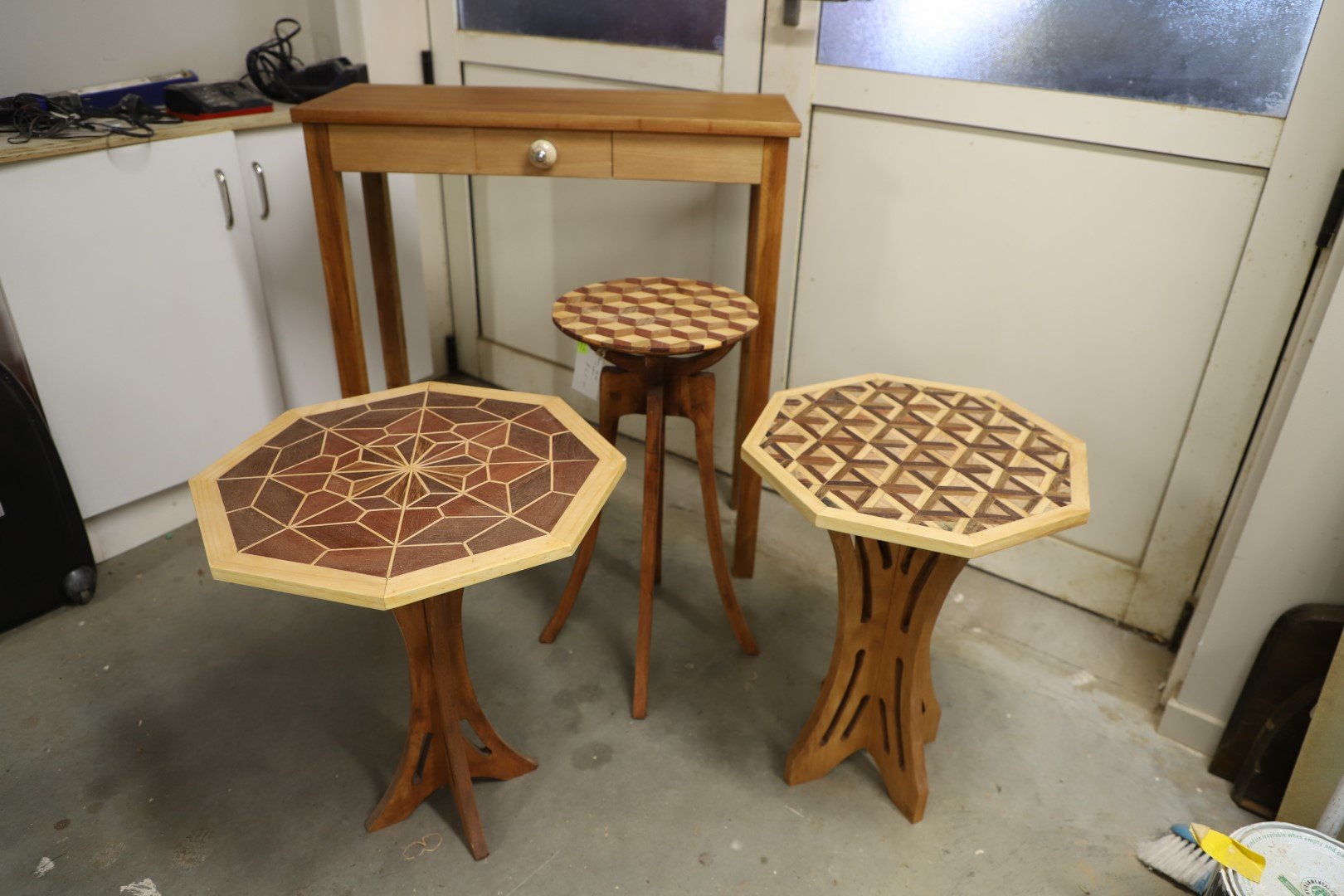 Above: John Langford's beautiful tables; Below: Gary Hamilton with one of the tui feeders. 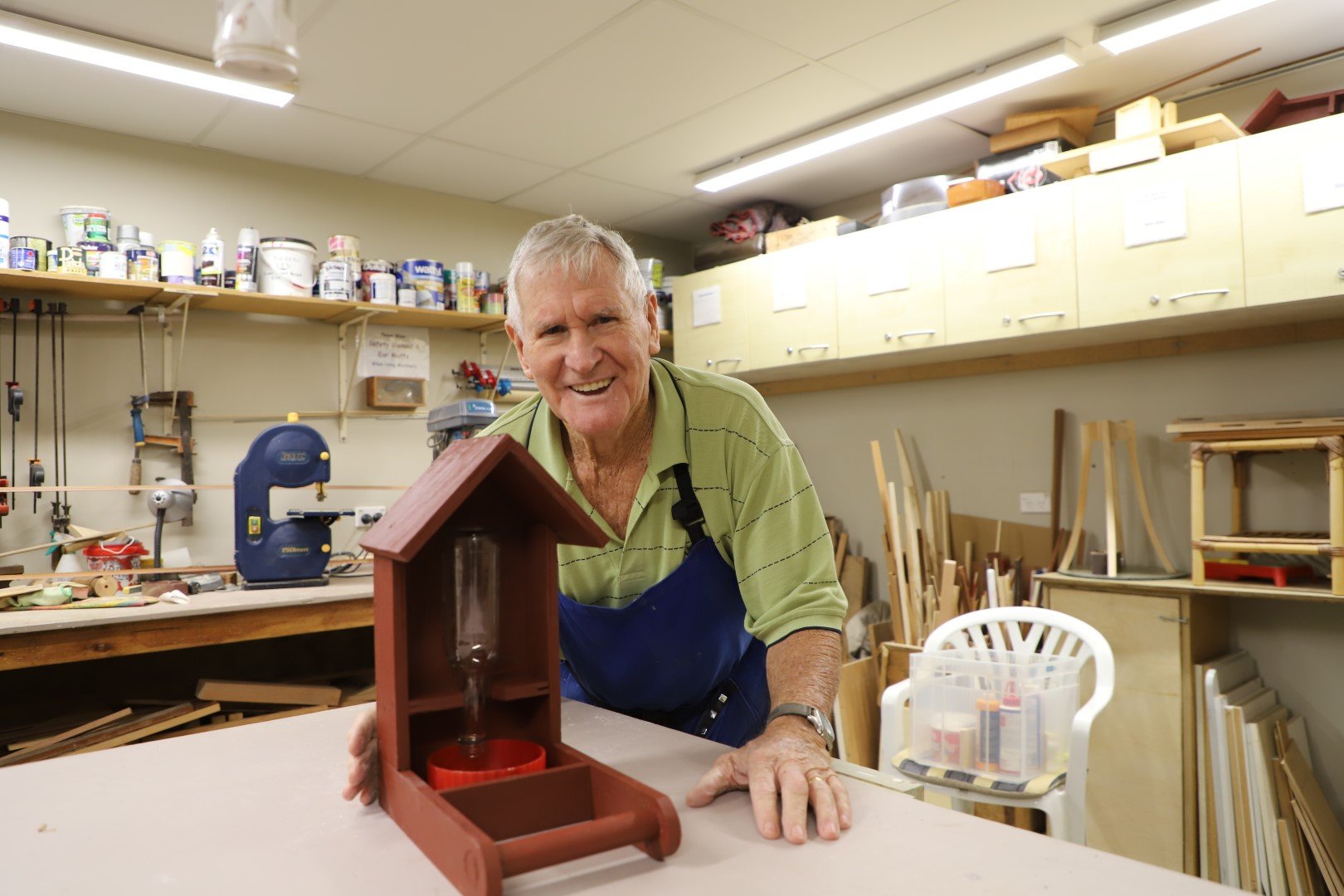 With the birdfeeders selling for $35 each or two for $60, the proceeds make a great contribution to the Ryman charity, Philip said.
“The shop has given $700 to Prostate NZ so far!”
Next on the list of items to try making is wētā hotels, to help improve biodiversity in the area.
Much of the wood used to make the items is donated, so the men have become quite adept at spotting potential sources of wood too!
“I’ve asked a couple of the sawmills to give us their offcuts of wood,” says Philip. “We’re even allowed to go and select the bits we want that we can have for free!”
They’re always looking for chances to recycle old pieces of furniture, much of which has also been donated.
“We used an old bedhead to turn into two beautiful bits of wood.”
Residents will often bring in requests for the men to help with, which is what another resident, Graham Edwards, likes to help out with.
These requests are broad in nature, with challenges ranging from raising beds and chairs to help people get out of them more easily, crafting a washing machine plinth and, most recently, creating two chimneys for a doll’s house!
“Basically, anything that anyone wants, they will come to us and ask and we are more than happy to oblige.”

When Mark and Grace left for Malaysia in 2020, they had no idea only one of them would come back.