Get checked, cover up, speak up

Ryman’s Operations Project Coordinator Kate Sharples knows more than most the importance of getting your skin regularly checked after a close call with melanoma in her 20s.
“I was about to head to the UK to do my big OE, and being fair skinned with freckles I thought it was high time to get my moles checked because I hadn’t at that point,” says Kate, a trained physiotherapist.
Kate found a dermatologist specialising in moles and skin who was supposed to be ‘the best of the best’ and so felt reassured that all was well.

“I vividly remember her saying to me to come back in my 50s, because that’s when most women get melanoma.”
Just a few weeks later, she was on her way to the UK, with a stop off for a month in Thailand with seven of her fellow physio friends.
One of them commented when they were out swimming that a mole on her back didn’t look right.
“I’d just had it checked a month before but when I got to the UK my sister saw it and also commented that the mole didn’t look very good and told me to get it checked.”
That was in the August and with the busyness of sorting out a place to live and a job it wasn’t until October that she finally asked a doctor to have a look.
“He said it looks okay but when I pointed out that my physio friends said it had the five signs of changes* he said he would make an appointment for follow up referral.”
Fortunately, Kate followed up and discovered the appointment hadn’t been made so when she finally saw a dermatologist at the Royal Free Hospital it was in the new year.
“As soon as the doctor saw it she had all the junior doctors coming in to look, using all the words that I knew because I’d done pathology. She cut it out right away.”
The mole was removed including the margins and was sent for testing.
The mole had malignancy with none showing in the border but crucially, the doctor ordered for a sentinel node biopsy which involves injecting a tracer dye into the site. This helps the surgeon locate the lymph nodes to remove and analyse in a laboratory.
The decision to order that test turned out to be a life saver for Kate.
“They injected radioactive dye into the mole site. The idea is to see where the dye has gone via imaging.”
The news that it had moved bilaterally to her axillary lymph nodes, under the armpits, was not good.
“The doctor gave me the diagnosis that I had cancer and it had metastasized,” says Kate.
“I remembered learning in a previous university pathology lesson that once it goes to your lymph nodes you’re screwed.
“My friends knew that too and they were all beside themselves - but didn’t want to let me know that.” 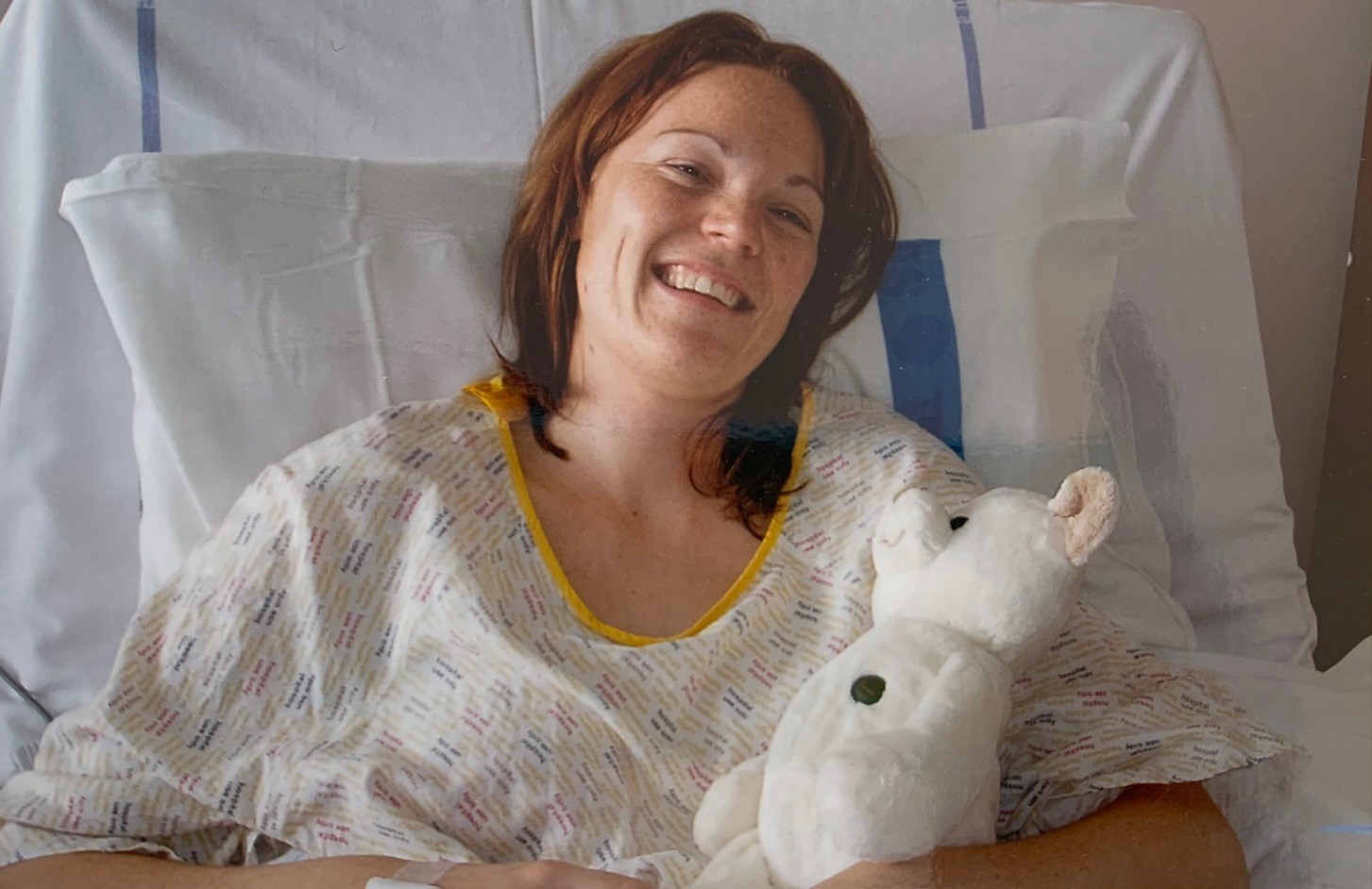 Still smiling: Kate during one of her hospital stays

Kate endured several surgeries to cut out more of the mole site and then the lymph nodes from under her arms before starting on a four-week drug trial for Interferon in the June.
“The idea is to boost the immune system since that will help to destroy the cancer cells.
“It was four weeks of intravenous Interferon and then six months where you inject it into your own skin.
“I got really really sick because I had to have it daily. By 6pm I would have flu like symptoms and migraines and would feel like death.”
Kate was glad that her mum had flown over to support her through such a traumatic time, especially when she got such bad diarrhoea and vomiting that she had to be admitted to hospital, putting the treatment on hold for a time.
“I think my liver decided it wasn’t happy with all the drugs. But after that small break I never had any problems again and was able to finish my treatment.”
Kate, now 41, wants to share her story to show that even though most people with melanoma are over 50, it can strike young people too.
“My biggest piece of advice is that you have to constantly be your own advocate. You are the one who knows your skin and body the best.”
Kate says when she saw photos of the mole on her back she was ‘horrified’ and while her treatment caused her further problems with fertility, she counts her blessings every day.

The scar serves as a constant reminder to stay vigilant

“Melanoma is the fastest, most progressive cancer there is. I’m so glad that my friends and family pushed me to get it checked.”
While her pale skin has meant she has always covered up in the sun, she has been super vigilant ever since her experience, going for six monthly checks with a skin cancer specialist and has had 10-plus dodgy moles cut out since.
“I even had one cut out of my breast. That was a basal cell carcinoma which is a skin cancer but has a different appearance to a melanoma.”
Kate says basal cell carcinoma usually look like shiny bumps, scars or slightly elevated growths which are white, pink or flesh coloured in appearance. They can become ulcery after some time and are less likely to spread to other parts of the body if treated early.
She adds: “My other advice to people is cover up, use a good quality suntan lotion – I use La Roche Posay Anthelios XL 50+ - and go and get checked by an expert.”

*Melanomas can often be detected using the ABCDEFG system, now updated to seven signs of change:
Asymmetry – One half is different from the other half
Border irregularity – The edges are poorly defined eg notched, uneven or blurred
Colour is uneven – Shades of brown, tan and black are present (there may also be white, grey, red, pink or blue)
Different – Looks different from other spots, freckles or moles, like an ‘ugly duckling’
Evolving – Any change in growth: new, elevated or painful
Firm – To the touch
Growing – Most are larger than 6mm and keep growing