When Logan Campbell resident Liz Palmer underwent hip replacement surgery earlier this year, little did she suspect she would be competing in a cycle race final only a few short months later.

Liz is one of a number of intrepid Ryman residents who competed in a virtual bike race final for gold in the world’s first international retirement village Olympic Games. The aim of the games is to bring together 12,500 residents across 42 villages in New Zealand and Australia. Other events are swimming, relay walking, bowls and quiznastics (gymnastics for the brain).

For the cycle final, the cyclists competed from different locations but could see each other on a screen projecting a virtual reality course.

Liz had been using the cycling equipment in the Logan Campbell gym to assist with post-surgical recovery from her hip replacement when she heard about the cycle event.

“I heard about this (event) and thought, this will give me a bit of motivation to keep moving!”

And move she certainly did, making it all the way to the final on Monday to race for a medal. 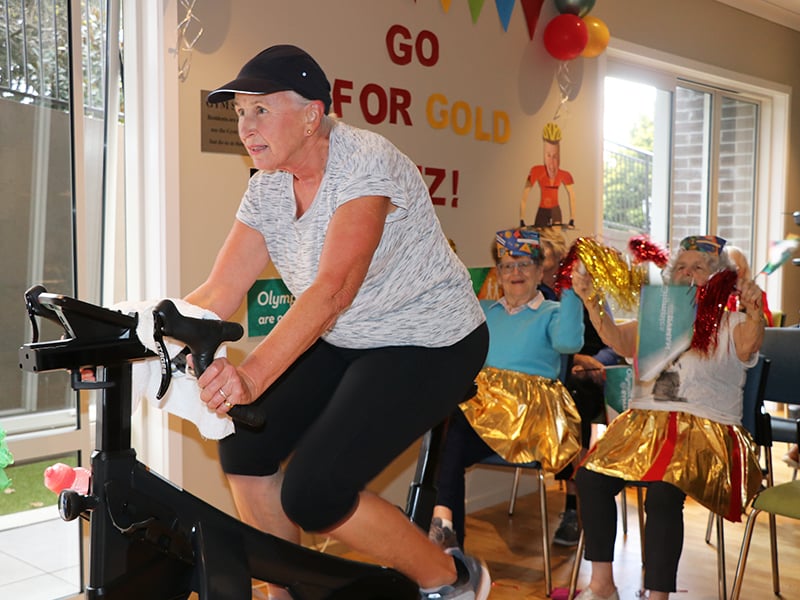 The race begins and she's off!

Liz had a few nerves before the big race, but she didn’t let that faze her. “I’ve just got to get on with it!” she said.

To ensure she had enough energy, she ate scrambled eggs and rye for lunch before the race. She also received plenty of energy from the atmosphere in the gym, which was decorated in her honour and filled with residents and staff supporting her pedal for the medal.

The course proved to be difficult, with a lot of hill sections. But Liz persevered in true Logan Campbell Olympic style, encouraged by the roomful of enthusiastic and very vocal supporters cheering her on, waving flags and singing. 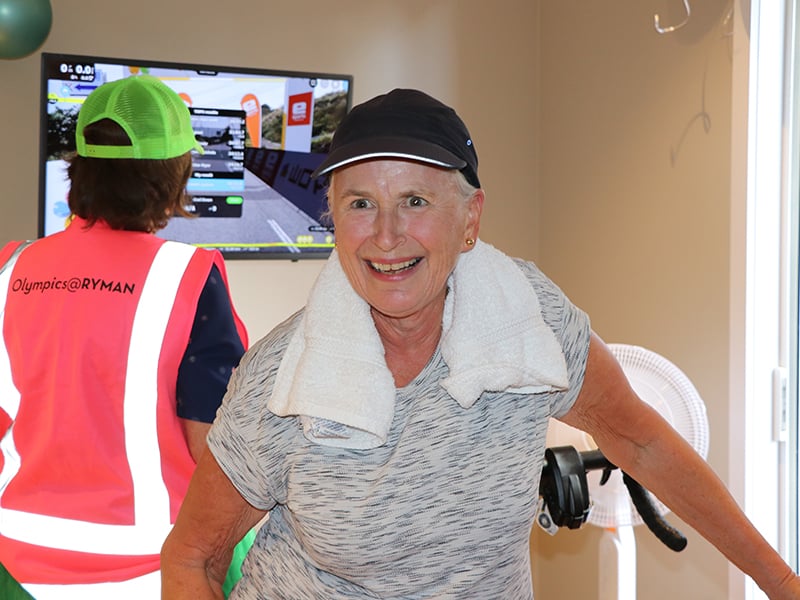 Liz with a post-race glow.

Afterwards, she admitted she was proud of herself for not giving up and said how much she appreciated the support from residents and staff.

“I’m really pleased it’s done. And with the support of everyone, that made a big difference.

“It was tough, but I’m very happy that I did it. And I got to know new people through it.”

She also found it motivating to see the other cyclists ahead of her on the screen.

“When you see them like that, in watching it, it is quite fun. You see one, and you think, I’m going to nail that one, then I’m going to go for the next.”

Husband Warwick was most impressed that Liz carried on through the tough terrain and didn’t quit when it got hard.

“She had perseverance and just carried on. I’m very proud of her.”

For Liz, participating in Olympics@RYMAN has been great fun. Some highlights were getting through to the final, laughing and having fun cheering on her fellow athletes in the relay walk and swimming events, and the support she has received from other residents.

“It has given me a bit more interest in the Olympics too,” she said.

Liz and her loyal supporters after the race.

When Liz isn’t busy representing or supporting the village in the Olympics@RYMAN, she keeps fit walking their two dogs; a ten-year-old golden lab named Bonnie and a two-year-old black lab named Yoko (yes, after that Yoko).

They were both originally trained to be guide dogs, but didn’t make the cut, so they now live at Logan Campbell Retirement Village with Liz and Warwick. Bonnie has already been to the Logan Campbell care centre with Liz to visit the residents there, and with her gentle nature and good looks, she was a big hit.

Warwick with Bonnie and Yoko on their apartment balcony.

Liz and Warwick both love living at Logan Campbell village. They particularly enjoy the friendships with other residents, the lock-and-leave lifestyle, and the feeling of care and security.

“I feel very secure, and that’s important to me. I feel safe,” says Liz.

“All the care and support we get is really superb. We really appreciate it; we can’t fault it.

“And going around the village and talking to the residents. It’s incredible what people have done!”

Liz and Warwick both trained as nurses, which is how they met. Although they only retired last year, Warwick has already returned to part-time work – as a COVID-19 vaccinator in the community!