Father’s Day looked a little different this year as Ryman residents in Auckland celebrated their special day in lockdown.

Covid-19 level 4 restrictions meant this year many couldn’t be physically together, but there were lots of creative ideas for how to celebrate!

Residents at Keith Park were treated to the sight of three “black beauties” parked outside where residents could view the novelty cars and bike, which belonged to staff at the village.

“It was a spur of the moment thing,” said Village Manager Kim Dawson. “Steve from construction had phoned me Thursday night with a brainwave to get the cars and bike down there for display for the dads on Friday - in advance of Father’s Day in lockdown on Sunday.

“Mark from Village Support then spent most of Thursday night cleaning the TransAm as it had been parked up in his dusty shed for months. But he went to the effort and brought it in all the same.

“We then had Father’s Day Tuatara Craft Beer and Nobby’s Cashews for each Dad as they came down and outside to look.

Father’s Day gift packs with Tuatara beer and Nobby’s cashews were handed out to residents.

“It was a good way to get the residents out and the conversations and memories that flowed of their own experiences with cars and motorbikes was heart-warming to hear. It generated a real feel-good buzz and they all said how much they appreciated the effort.”

One resident’s daughter, Karen, texted in to express her gratitude saying: “Thank you so much for once again going above and beyond and making Father’s Day so special for dad when we couldn’t be there. You really hit the jackpot.”

Over at Edmund Hillary, the staff made a special tribute with big block letters spelling ‘dad’ on a small hill inside the village grounds. 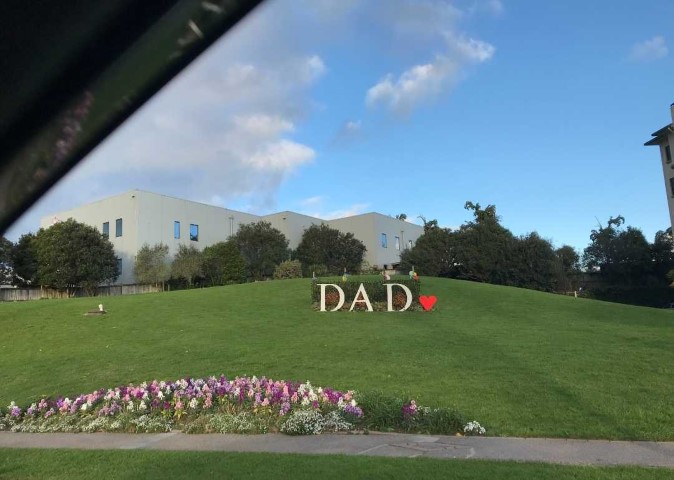 Edmund Hillary shows their appreciation for the dads out there.

Also at Edmund Hillary, was one special staff member who decided to go above and beyond. Activity and Lifestyle Coordinator Lanei Dimaano was spotted delivering yummy goods to residents - dressed as a cowboy!

"I delivered the personalised Father's Day cards, simple gifts, and ice cream treats to our dear male residents. I wore the cowboy outfit and performed just simple dance steps. They laughed and some wondered who I was. When the residents realised that it was me, we all ended up laughing together," exclaimed Lanei. 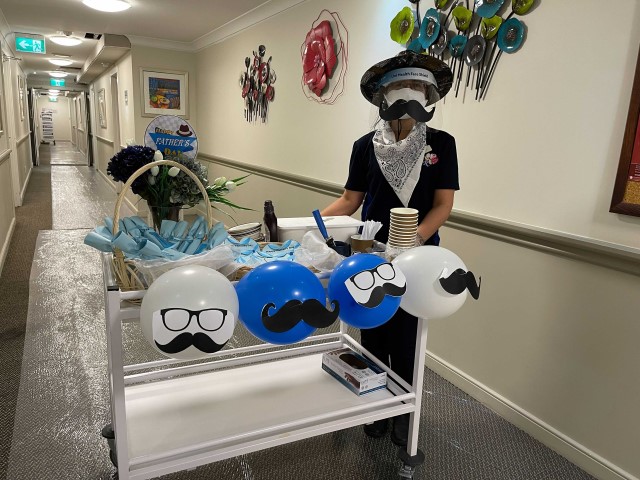 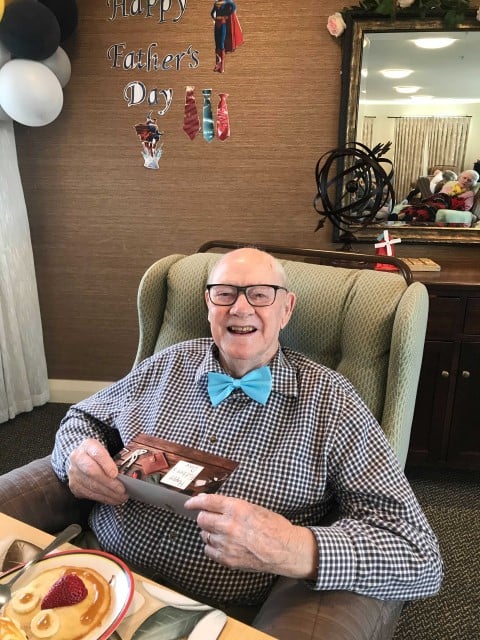 While happy hour in a bag and Father’s Day treats were delivered, there were also 6000 special cooked roast lunches made for all care and serviced apartment residents. Grace Joel stealing the show with their gorgeously decorated tables.

The tables at Grace Joel were beautifully decorated in Father’s Day fashion. 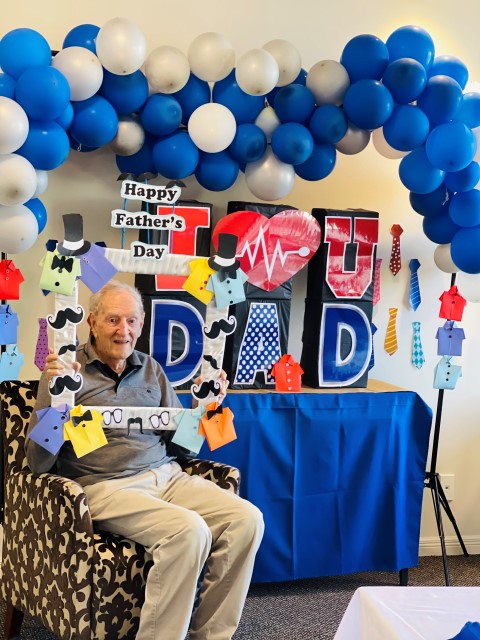 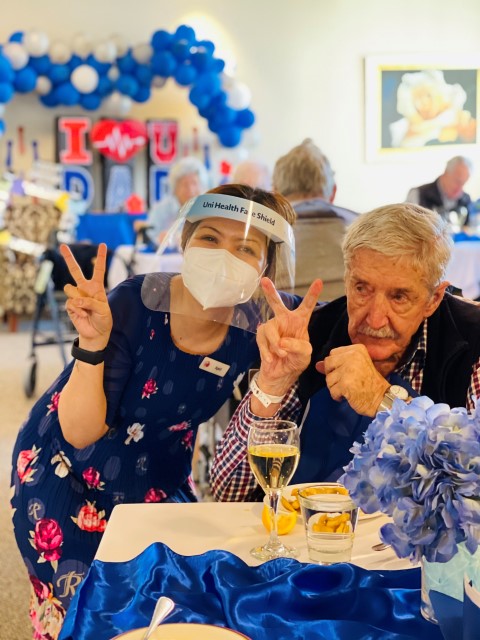 Not to be missed, of course, was the chance at a lovely photo with the wall displays. 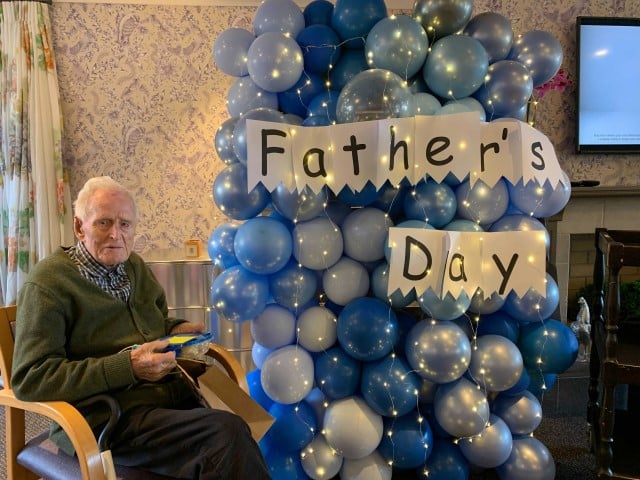 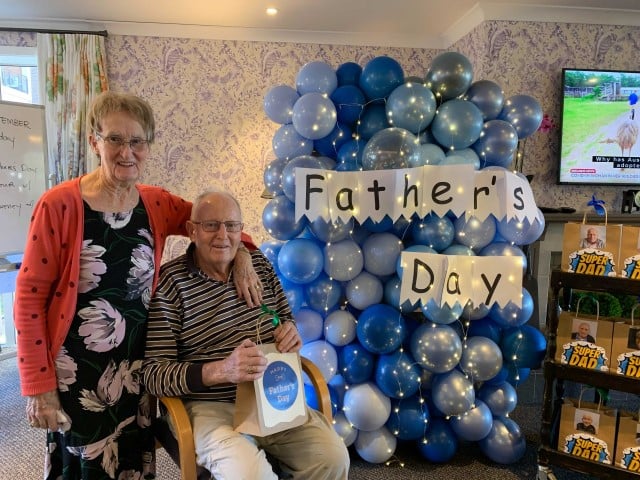 It was all smiles from Kevin and Madeline Holland while they also celebrated at Bert Sutcliffe on Sunday. 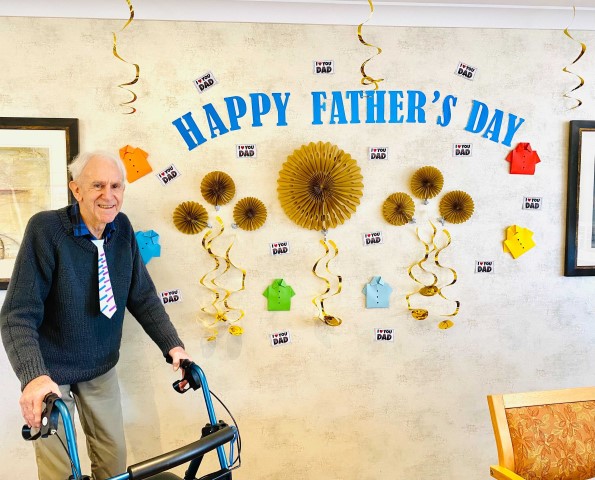 Roger McElroy smiling ear to ear in celebration of his big day at Murray Halberg in Auckland.

All traditional plans may have been thrown out the window, but Ryman residents and staff still made it a special day to remember.