A new portrait of artist Evelyn Page has been unveiled at the Ryman Healthcare retirement village in Orewa bearing her name.

Today’s unveiling was held in front of almost 200 residents from the village who were thrilled to see Evelyn Page’s daughter Anna Wilson also present at the event.

The stunning painting was commissioned by Ryman as part of a series of portraits of its village namesakes by well-known Auckland artist Craig Primrose.

Anna paid tribute to Ryman’s gesture whilst acknowledging the pressure for an artist painting the portrait of another artist.

“I visited the Auckland Art Gallery yesterday and looked at the work of Colin McCahon, who was a friend and contemporary of my mother’s, and it occurred to me that not many artists paint other artists,” said Anna, who lives in Christchurch.

“I’m so glad that Ryman has chosen to do this and thank you to Craig for this beautiful work.”

His painting of Evelyn Page shows her sitting in front of her creation of a still life scene, holding her paintbrushes as she turns to face the beholder and uses beautiful golden yellows, greens and teals, echoing her own love of vivid colour.

Craig admitted there was a degree of pressure for an artist when painting another artist which he had also experienced when producing the portrait of Grace Joel.

“It took a couple of attempts to get this one right but I’m so glad Anna is happy with the result,” he said.

Ryman’s Chief Financial Officer David Bennett told the audience that Evelyn Page is one of six female New Zealand artists with Ryman villages named after them.

“It has become tradition for Ryman Healthcare to name its villages after great New Zealanders, which was the idea of our co-founder Kevin Hickman. He thought it was a great way to celebrate our people, rather than naming a place after a geographical location,” David said. 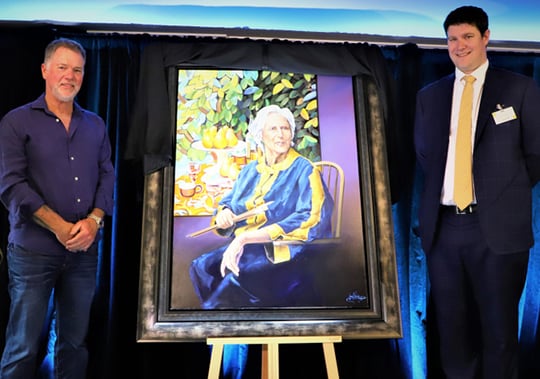 Honouring Kiwi artists was also a way of reflecting Ryman’s avid and long-standing support of the arts having sponsored organisations including the Royal New Zealand Ballet, New Zealand Symphony Orchestra, Dame Malvina Major Foundation and the actors’ Equity Awards, and programmes such as Wellington’s Arts on Walls.

“How fitting it is to name a retirement village after an artist whose body of work spanned seven decades and has been described as ‘reflecting the human presence and a full, busy richness of life’ – both phrases which would accurately describe Evelyn Page the Retirement Village as well,” David said.

The audience enjoyed hearing details about Evelyn Page, who was born in 1899, who continued painting well into her 80s, despite suffering from crippling arthritis.

After undergoing an operation for a total hip replacement, Evelyn signed up the theatre nurse as a model for a painting of a reclining nude, such was her dedication to her art!

Evelyn Page was made a Fellow of the New Zealand Academy of Fine Arts; she was the first artist to hold the Governor-General’s Art Award; and in 1987 she was appointed an Officer of the Order of the British Empire for her services to art, a year before she died aged 89.

Village Manager Jill Clark said the team would now be considering a suitable location in the village to display the 142cm x 111cm painting and show it off in the best way.

Ryman Healthcare was founded in Christchurch in 1984 and owns and operates 36 retirement villages in New Zealand and Australia. Ryman villages are home to 11,200 residents, and the company employs over 5,500 staff.

Elizabeth was born and grew up in Khandallah and has lived there most of her life.

When the Artzheimers group visits Christchurch Art Gallery Te Puna O Waiwhetū the members are stimulated, not just by th...